Read Complicated by You Online 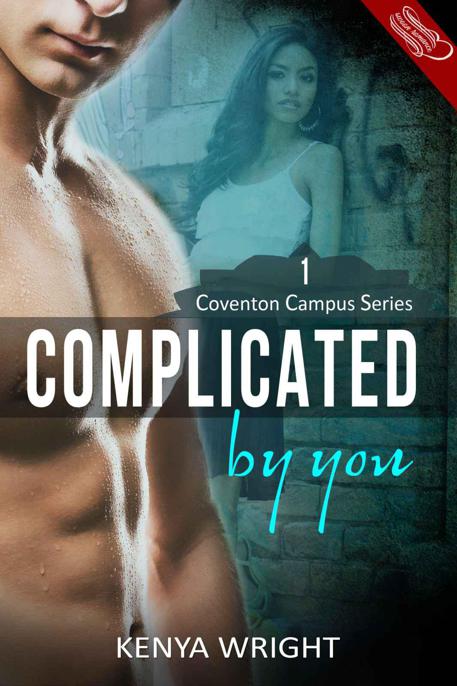 This book is a work of fiction. Names, characters, places, and incidents are either products of the author’s imagination, or are used fictitiously. Any resemblance to actual persons, living or dead, business establishments, events, or locales is entirely coincidental. The author makes no claims to, but instead acknowledges the trademarked status and trademark owners of the following brands, products or persons mentioned in this work of fiction including:
The Muppets,
The Muppets Go Hollywood
,
Alice in Wonderland, Alice’s Adventures in Wonderland
, “The Mouse’s Tale,” Lewis Carroll,
The Rocky Horror Picture Show
, Purity Ring, “Fineshrine,” Ella Fitzgerald, Billie Holiday, Etta James, Tupac, Nina Simone, “Sinnerman,” Michael Jackson, and “Thriller.”

COMPLICATED BY YOU by Kenya Wright

A college girl, in love with her best friend from childhood, faces the decision to let him go, or share him with her roommate.

All rights reserved. Published in the United States of America by Swoon Romance. Swoon Romance and its related logo are registered trademarks of Georgia McBride Books, LLC.

No part of this eBook may be used or reproduced or shared in any manner whatsoever without written permission of the publisher, except in the case of brief quotations embodied in critical articles and reviews.

To my baby sister, Bianca,

I hope your college years prove to be a fabulous adventure.

The Kermit the Frog lamp bathed my roommate’s and her boyfriend’s nude bodies in dim green light. They writhed and rubbed against one another, moaning and groaning in the bed only four feet away from mine. Sex filled the air. Peeking farther out from under the covers, I inhaled the sweet scent and licked my lips.

“You smell so good. I just want to taste every inch of you.” Jay planted a trail of kisses on Cynthia’s pale skin, from her neck to her flat stomach. She purred in approval. He took his time, lowering himself to the center of her thighs.

God, he’s beautiful. I should close my eyes and turn away.

Drops of water wet Jay’s chestnut brown curls and trickled down his back. I longed to lick the moistness away. They both must’ve just come from the shower. For the past three months, they’d been showering together most nights. Cynthia hated how sweaty Jay was after football practice.
I can’t believe it’s already been three months. My best friend is hooked on her for sure.
He’d never been with anyone longer than a month without trying to break up once or twice.

The muscles on his arms flexed as he devoured Cynthia’s center. I couldn’t get a good look so I imagined him taunting her with no mercy—the tip of his tongue sliding up and down in lazy strokes and his mouth sucking on her plump clit. My legs shook as I slowly wound my hips in a circular motion, so excited to get my fingers between my thighs.

I gripped the sheets. Her moaning had awoken me earlier. Not that I was ever pissed when that happened. Those moans ripped from her parted lips and drummed little jealous pangs in my chest. “Lick it, baby. Yes. Yes.”

My own sex clenched and moistened.
I shouldn’t do this again. I really shouldn’t.
My heart sped up with anticipation. My skin tingled. I squeezed my thighs together with no relief.
I’ll just look for a tiny bit. They probably won’t finish anyway. They never do.
Moving her long, blond hair away from her face, Cynthia slapped his back. Jay lifted his head. The light shined on his wet lips.

“Turn the music on so Evie won’t wake up.” Cynthia shielded her stiff pink nipples with a pillow decorated in scenes from the movie
The
Muppets Go Hollywood
.

“We will,” she whispered. “I don’t want to wake her up again. I think she was pissed the last time.”

Groaning, he jumped off the bed. I got a great view of his equipment, not that this was my first time. I’d seen it over the years. At thirteen, we used to skinny dip near Middleton’s Plank, an old, abandoned port behind his house. Just Jay, his crazy dog Humphrey Bogart, and me. My mom was his dad’s executive assistant. Our parents conducted lots of business out of his dad’s office in the back of their huge house. I would take the bus home with Jay and hang out until Mom finished. Even then, with Jay’s slim frame and acne-covered face, he’d captured my heart. He just never realized it, and I didn’t have the balls to tell him so.

If he liked me, he would have told me himself.

Jay always claimed I was beautiful, complimenting the silky touch of my chocolate complexion and the uniqueness of my curly hair. I’d grown it out for him, letting it fall a few inches past my shoulders. On the few mornings we ran together, I could swear he checked out my behind and legs sometimes. Although I was slim, I had curves in all the right places. But, he never treated me as anything other than a friend.

I remained satisfied in my role as his best friend, the one who consoled him when his parents died, as his pen pal when he moved in with his grandparents, and his confidant in his darkest moments of high school. I eventually followed him to Proctor University in Coventon, Florida, and never regretted the move, even though I missed my mom and friends.

My pulse quickened some more as Jay walked around her side of the room, the whole time trying to hold himself.
Damn, he’s so much bigger now. And even more cut with muscle.
He could barely hide his erection with both hands. The thickness was hard and pointed upward. The tip swelled with need. He scrambled around Cynthia’s shelf, which was crowded with The Muppets stuffed animals—Fozzie Bear wearing
Wocka! Wocka! Wocka!
on his t-shirt,  Rowlf the Dog playing a plastic piano, Gonzo in full tuxedo, and several Miss Piggys in evening gowns, Catholic school girl outfits, daisy dukes, and the latest gift from Jay, Lady GaGa Miss Piggy.

A sigh left his lips as he gave up searching Cynthia’s things and found his way over to my nightstand.

“No, she won’t.” He pressed my iPod as it rested near the speakers and dove back into bed. “She’ll just be mad it’s not one of the three queens.”

“Oh, you mean her jazz music.” Cynthia giggled. I smirked while the chilly electro-pop group, Purity Ring, played in the background. A female voice filled the room, singing the first lyrics to “Fineshrine.” Harmonious, mellow bass rode an electronic piano’s melody and throbbed through my body in soothing waves. It was one of the albums he put on my iPod when he bought it for my birthday last month. He’d been trying to convince me that electro-pop represented real music while my favorite hip hop groups ranked high on the list of uncreative and monotonous garbage, and practically all of my jazz made him yearn to kill himself. I pretended I hated the playlists he put on there, when in reality, I listened to them nonstop as I studied in the library.

“Okay. Music is on. No more stopping me.” He landed a path of kisses over one of Cynthia’s breasts. She panted, her chest rising and falling in a staccato pattern. Envy crept into my pores, but I did my best to think through it and focus on the moment, their moment. “Come here, you.”

They returned to love making. Motivated by the song’s rhythm, he caressed her navel with his fingertips in lazy swirls that made her writhe and whimper under the music. Inch-by-inch, I slipped off my panties thankful that the music was on and they wouldn’t hear my bed squeak. It took so long.
Be patient.
I had to remain a sleeping pile to them, so every ten seconds or so, I did a slow and lazy rolling over as if experiencing an upsetting dream or being riled by the presence of the song.

“Wait. Maybe we should turn the music down,” Cynthia suggested.

“It’s fine.” He dove his hand between her thighs.

A gasp rushed out of her open mouth. “Ouch.”

He paused. “Did that hurt?”

“You don’t even have to touch me there.”

“I know, but I love touching you there.” He removed his hand from the center of her thighs and lapped his tongue at her nipple.

“Enough.” She squirmed under him. “Just take me now.”

“Are you sure?” He kissed the tip of her nose. “You’re so beautiful. I like taking my time.”

“And I like being fucked fast and hard.” She spread her legs, seized his cock, and squeezed the point. Biting his lip, he raised himself up then moved between her thighs. It seemed she’d won.

She screeched a little as he pierced her. I imagined his muscular buttocks clenched together as he shoved himself inside of her. My erect clit floated in the slick wetness of my arousal. I imagined him near my center instead of my own fingers, him thrusting inside of me, his hands squeezing the full mounds of my breasts and teasing the points, his voice whispering his desire in my ear, his scent seeping into my skin until he possessed me. I brought my other hand to my hard nipple. A sigh escaped my lips as I pinched it. Sparks of pleasure heated in my chest and soared to my wet sex.

“Faster, baby.” She closed her eyes and scrunched up her face in an odd expression. I couldn’t figure out if this was her sex face or if she had to go to the bathroom.

Hey, I can’t judge. Who knows what my face looks like when I’m having sex? I bet it’s crazy.

I kept my body as stiff as I could while flicking my finger from side to side over my drenched lips. My clit puffed up some more. Teasing myself, I deliberately strayed away from touching that aching bud. Like hide and seek, I tiptoed my fingers near, calling out with feathery brushes, letting her know I was so near to revealing her hiding place.

His Human Hellion (Ultimate Passage Book 2) by Thorne, Elle
The Brass Verdict by Michael Connelly
Man With a Squirrel by Nicholas Kilmer
NovaForge by Toney, Scott
Take or Destroy! by John Harris
The Right Bride by Jennifer Ryan
The Claiming of a Virgin King by April Andrews
Bonfire Beach by Lily Everett
The Bay of Love and Sorrows by David Adams Richards
Out Of Her League by Kaylea Cross