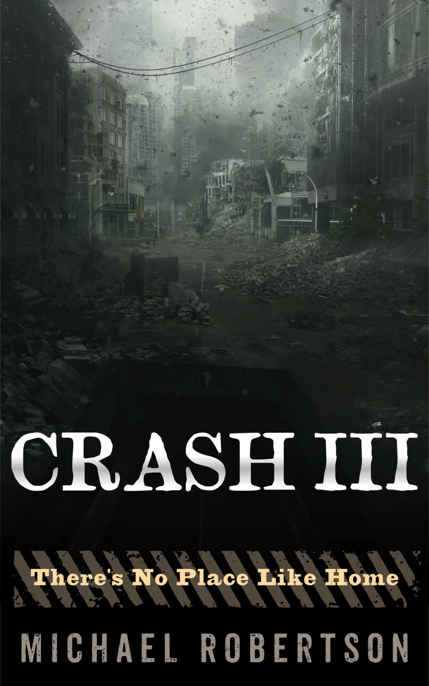 No Rest for the Rich Kid

If Your Name's Not Down

Welcome to the Neighborhood

Amanda Shore of By The Shore Editing

Cover Design by James at
GoOnWrite.com

Crash III: There’s No Place Like Home
is a work of fiction. The characters, incidents, situations, and all dialogue are entirely a product of the author’s imagination, or are used fictitiously and are not in any way representative of real people, places or things.

Any resemblance to persons living or dead is entirely coincidental.

No part of this publication may be reproduced, stored in a retrieval system or transmitted in any form or by any means electronic, mechanical, photocopying, recording or otherwise, without the prior written permission of the author except in the case of brief quotations embodied in critical articles and reviews.

Michael shivered as another frigid gust of wind tore up the abandoned street, cutting through his many layers. He wouldn’t be able to move if he put any more clothes on, but if the temperature dropped any further, he’d freeze to death.

With his head dropped to avoid the cold blast hitting his face, Michael clenched his jaw and continued doing what he’d being doing for weeks now… he walked. One foot in front of the other—just keep going and things would change… they had to.

The moon hung as a sliver in the sky—a fingernail his dad often called it—surrounded by pinpricks of light in the vast expanse of darkness above. For the first few weeks after electricity had stopped working, Michael would go outside each evening and look up at the stars. The light pollution in London before the crash made stargazing impossible.

It wasn’t long, however, before he gave up on that. Knowledge of every constellation visible to the naked eye didn’t have much use in this world.

As Michael walked, he distracted himself by counting his steps.
One, two, three, four, one, two, three, four…
It didn’t take his mind off the surrounding buildings though. Burned out and abandoned, anything could be inside them, watching him as he passed, lying in wait for the right time to pounce. The monsters and murderers used to live under the bed; now, they lived everywhere.

Before he’d heard the engine, Michael caught the glint of headlights behind him. A quick glance and he saw the truck in the distance. “Damn it.”

If he ran, it would look like he had something worth taking. Instead, Michael looked at the ground as he walked. His back wound tight as the approaching sound of the big engine reverberated off the derelict shop fronts.

With his shadow stretching out before him, he continued counting, adrenalin adding a wobble to his already shivering form.
One, two, three, four…

The tension in Michael’s back drove a sharp pain up to the base of his skull.

With the vehicle getting closer, the need to run twitched through every muscle in his body. It was them. It had to be them. Should he just run? But what if it was someone else? The last thing they’d care about was a random kid wandering the streets.

When the truck slowed down next to him, Michael fought the urge to look across. They didn’t need to see his face.

The truck got so close he could touch it if he’d wanted to. It slowed to Michael’s walking pace, and the smell of exhaust fumes caused him to scrunch his nose up.

The scrutiny of the truck driver burned into the side of Michael’s head. If they stopped, he would run. Whatever happened, he wasn’t going back there. Now that he’d escaped, they’d never take him again.

Michael saw a park to his left and shook as he glanced into it. The inky blackness seemed impenetrable, but if it meant avoiding the warehouse again, he’d damn well try…

The loud revving of the big block engine made him jump, his heart damn near exploding, but he kept his eyes lowered. As long as they didn’t recognize him as the escapee from a few weeks ago, maybe they’d leave him alone. What would they do to him if they did realize who he was? What would Julius do?

Seconds later, the driver sped up and the truck peeled off. Enough tension fell from Michael’s back that he heaved a heavy sigh.
Thank god.

Although the cold burned his face, Michael kept his head lifted as he watched the red lights of the truck disappear. It can’t have been them. They would have stopped and tried to take him. Sharp panic ran through his chest.
Could it be an ambush? No, of course not. Why would they need to ambush a ten-year-old?

Michael cast another glance into the park and bit his bottom lip.

The lights on the back of the truck suddenly glowed bright red. They lit up the street, highlighting the litter skittering across it in the frigid wind. With his breath catching in his throat, Michael shook his head.
No way! Not this time. No damn way!

A white light on the back of the truck punched through the thick fog.
Didn’t that mean reverse?

The whine of the reversing engine calling out in the still night made his pulse rage. He looked into the park for escape again.

When the truck stopped next to him, Michael fought the urge to look at it. The sound of the electric window on the side closest to him caused him to lift his tense shoulders to his ears.

The voice was deep—an adult for sure—but it didn’t sound mean like the men he’d escaped from.

Ignoring the man, Michael continued on.

“Kid, what are you doing out this late?”

What was he going to do next, ask him where his parents were? His mum was hanging from the banister at home, and his dad was a frozen corpse on his driveway. What did this man want from him? Why didn’t he go away and leave him alone? Wasn’t it obvious that he didn’t want to talk?

“Hey, boy, do you want some food? I have cookies.”

Shaking as he walked, Michael still didn’t look up. The others used the same trick except they offered cake; a large slice of sickly sweet chocolate cake to entice you into their car—the perfect bait for a hungry and lonely boy. Cake was the only pleasure they offered; one sugary treat got you locked in Hell with the others. The memories of the boys’ screams spun through his mind.

Michael jumped when the man sounded the horn. With his hand on his chest, he felt his heart pounding through his many layers of clothes as he turned to the driver of the truck. The man’s lips moved, but the words didn’t register with Michael.
George?

The man didn’t seem to recognize him. “That got your attention then? Good! Who are you? What are you doing out this late?”

Michael panted as he stared into the truck, his breath turning to fog in the cold air. Warm urine ran down the inside of both of his thighs and the cold turned it frigid in an instant.

The man’s face changed, and he pointed at him. “Fuck! You’re the boy; the boy in the burning house. The boy whose dad…”

When George popped his door open, Michael bolted into the dark veil of the park next to him.

As he ran, tearing through the darkness at a flat-out sprint, the sound of his own ragged breaths drowned everything else out.

As he risked a look over his shoulder, something snagged his foot. It was like falling with his eyes closed, and all he could do was throw his arms out in front of him.

Fire tore through the palms of his bare hands, and a jolt ran up his arms into both shoulders when he hit the frozen ground.

Despite the pain, Michael crawled forward through the long frozen grass and found a large bush to hide next to. He sat up and gathered his knees into his chest as he watched the entrance to the park.

The light from George’s truck made it easy for Michael to see the man’s silhouette. George threw his hands up and called into the darkness, “Hey, kid, there’s some food on the grass for you.”

The chocolate cake trick all over again. They wouldn’t get him a second time. Fool him once… Michael held his breath as best as he could, his heart aching from the effort, and watched George walk back to his truck.

Michael’s eyes stung as he continued to stare.

The echoed slam of the truck’s door made Michael jump. Seconds later, the engine revved, and the truck pulled away.

Alone and surrounded by darkness, Michael listened to the night. When a fox screamed, he pulled himself into a tighter ball. No matter how many times he heard the chilling sound, he’d never get used to it. It reminded him of a woman being tortured; although foxes seemed to have a better life than most other living creatures now. London had been turned into a place for scavengers—scavengers and abusers.

Michael sat on the grass long enough for the frost to melt and soak through his clothes, turning his skin to ice. The sting of pee had left his legs, but he shivered harder now than before.

The cold had wormed into Michael’s joints, sending deep aches into his fingers and knees. If he didn’t get up soon, the sub-zero atmosphere would encase him in its rusty grip.

Even craning his neck hurt, but Michael did it anyway as he looked at the dark exit from the park. Had George really left some food? He certainly got something from his truck and bent down to put it on the ground.

He had to move. If he stayed there much longer, he’d be a frozen corpse by morning. He could go farther into the park and see where he ended up. A shiver snapped through him when he looked behind into the darkness. The utter absence of light pushed against his eyeballs as if trying to take even the concept of visibility from them.

The Innocent by Evelyn Piper
The Bad Boy Billionaire's Wicked Arrangement by Maya Rodale
The Shamrock & the Rose by Regan Walker
The Name of the Wind by Patrick Rothfuss
Homestyle Japanese Cooking by Susie Donald
Novel - Airman by Eoin Colfer
The Book of Small by Emily Carr
Murder in A-Major by Morley Torgov
Rogue Knight (Medieval Warriors Book 2) by Walker, Regan
The Child Comes First by Elizabeth Ashtree