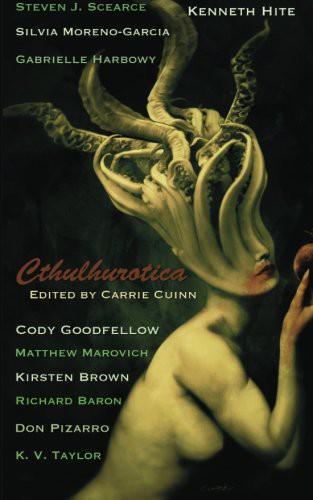 All rights reserved. No portion of this book may be reproduced in any form without written permission from the publisher.

Printed in the United States.

Descent of the Wayward Sister
by Gabrielle Harbowy

Into the Darkness
by Galen Dara

The C-Word
by Don Pizarro

The Widow’s Walk
by Galen Dara

Victim of Victims
by Anonymous

The Cry in the Darkness
by Richard Baron

Turning On, Tuning In, and Dropping Out at the Mountains of Madness
by Ahimsa Kerp

Song of the Catherine Clark
by Maria Mitchell

Between a Rock and an Elder Goddess
by Mae Empson

The Fishwives of Sean Brolly
by Nathan Crowder

Deep Ones
by Galen Dara

Love from the Black Lagoon
by Galen Dara

The Lake at Roopkund
by Andrew Scearce

Your Fisheater
by Stephen Stanley

The Dreamlands of Mars
by Travis King

The Assistant from Innsmouth
by Steven J. Scearce

The Whateley Estate
by Galen Dara

The Summoned
by Clint Collins

The Box
by Galen Dara

The Brides of Tindalos
by Kirsten Brown

The Sexual Attraction Of The Lovecraftian Universe
by Jennifer Brozek

The book that you are holding in your hands started out, as so many others have, in a half-serious conversation about the future of Weird Erotica. Well, maybe not all books start by fetishizing zombies or Halloween nightmares, but many of them do find their genesis in the ideas sprouted from a group of writers indulging in a little humorous word play. Eventually one of those creative people takes a thought a little more seriously than it was intended, and a misplaced word becomes an idea – which becomes a book.
Cthulhurotica
was born from the same fires; when the topic of Lovecraftian erotica came up, I was immediately struck with the sense that I knew exactly what I wanted to do with the concept.

Explaining the ideas behind this book starts with acknowledging that I love Howard Phillips Lovecraft’s writing. I’ve read every one of his stories that I could find, I have collections by a couple of different publishers sitting on my bookshelf, and have gotten through a decent-sized chunk of his poetry. I have watched documentaries about his life and B-movies based on his work and have played quite a lot of
Munchkin Cthulhu
and
Call of Cthulhu
and a few other games with Lovecraftian themes. I’ve delved into the writings of his contemporaries and friends, most notably August Derleth, Robert Bloch and Robert E. Howard, and I’ve read Lord Dunsany’s
The Gods of Pegãna
and a few of the “King in Yellow” stories. I am not an expert but it is safe to say that I am a big fan.

What I mean is, I am a fan of the man’s work, and what it spawned. The man himself? I don’t think we’d be friends. You see, old H.P. had a well-documented disgust, an all-purpose loathing, for anyone he considered less than himself, and nearly everyone who wasn’t a white male from New England appears to be on that list. Women, people of color, homosexuals, religious people, and immigrants all inspired a variety of colorful epithets. He expressed his feelings in vividly disgusting terms, and invoked archaic insults should one of these lesser creatures happen to appear in a Lovecraftian story – or in one of his many personal letters. Much ink has been spilled on the discussion of his obvious racial fears and possible sexual ones. It has been argued simultaneously that Lovecraft was an innocent product of his time or that he was a nasty, hate-filled man. Evidence seems to support the latter, at least for Lovecraft’s early life. Why, then, do so many people admire him?

He was a brilliant writer, and a prolific one, penning fiction, poetry, and approximately two hundred personal letters to fellow writers. His literary creations are thick with obscure words and creative spellings, dripping with adjectives, and heavily embellished with description. His body of work ranges from the slightly cheesy to the truly terrifying. Whole companies have sprung up because of, and are supported by, the manifold spawn of his mind. The monsters he envisioned are alien, inhuman, and often slimy, both frightening and intriguing readers for the last 90 years. The now-labeled “Lovecraftian Universe”, also called the Arkham Cycle and the Cthulhu Mythos, brought us such memorable fictional locations as Innsmouth and Arkham, Massachusetts, both of which have gone on to appear in popular fiction (Batman’s “Arkham Asylum”, for example) along with the monsters who live there.

Lovecraft gave us subjects with such potential.

When I read HPL’s works, even when I was swallowed up by everything that he put in, I couldn’t help noticing what he left out. Where was the romance? I asked myself. Or the love? Where were the women investigators? I’d grown up on Nancy Drew books and wondered why there wasn’t a plucky niece rummaging through the dead uncle’s desk drawers, looking for clues to the mysterious circumstances surrounding his death. I looked, but couldn’t find a femme fatale anywhere. Nor could I find a college professor with a handsome live-in “friend” (as it probably would have been described at the time). When the hero sets off to a foreign land, or entertains visitors, where was the not-white but equally educated and interesting contact from another country?

Where was the secretary with the tight sweater and the heart-shaped ass?

While Lovecraft implied by omission his disdain for the things I was missing, he never completely ruled them out, instead composing a world where there was much his characters didn’t have access to. I always preferred to think that strong women and loving couples and flirting and passion and a hundred other delightful emotions existed, somewhere, in Lovecraft’s world, and we just didn’t get told that story. Which begs the question: what if these realistic, flesh and blood and sex and sweat characters did meet up with Lovecraft’s? What if the Arkham Cycle took place in a Universe where every human emotion was possible?

Much has been written about what Lovecraft put into his stories. What we needed was a book that showed off the potential in what he left out.

The idea grew and spread, multiplying over the Internet until I began to see people mentioning the concept who had no connection to me at all. I also ended up with many more submissions than I could put into the book, allowing me to pick and choose the ones I felt worked the best as part of the evolving collection. The writers whose work appears here crafted stories that immediately struck me as having a core of fear, despair, or curiosity (all Lovecraftian emotions) and each included those otherworldly elements for which the master is so well known. As I selected stories, and began to look at art, the book coalesced into something tangible.

There are a number of people that I have to thank for helping this idea along into a real book. First and foremost among them are the contributors – the writers and artists who took me seriously long enough to create the works you’ll find here. Even those I rejected, I appreciate, for taking the time to submit something to me at all. Those I accepted have my gratitude, for not only submitting work but for being so damn brilliant at the same time. While I thank each of them, there are some specific things for which I must express my appreciation:

To Galen Dara, who never shied away from a challenge, who brought all of my tentacled-dreams to life: thank you. Your art made this book something much more than what it would have been without you. You made Mythos erotica
lovely
. And you came back for more when I asked for help updating the book from the first edition.

I will always be grateful.