Read Dandelions on the Wind Online

Dandelions on the Wind 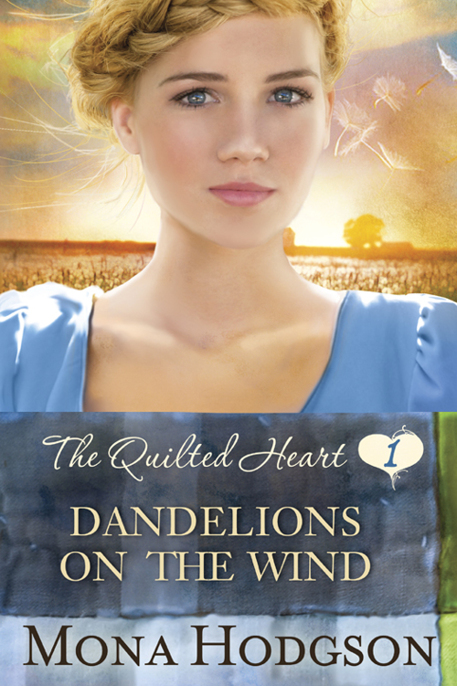 Praise for
Dandelions on the Wind

“Like a warm breeze ripples across a lake,
Dandelions on the Wind
offers a gentle crossing in this first-in-a-series novel. Mona Hodgson gives readers characters we care about, a bit of intrigue, love, and a satisfying ending that promises more in the second series book. Well done!”

“Filled with true-to-life characters and fascinating historical details,
Dandelions on the Wind
is a heartwarming story of second chances in the turbulent days immediately after the Civil War. Don’t miss this, the first of Mona Hodgson’s The Quilted Heart trilogy. If you’re like me, you’ll be waiting eagerly for the second.”

“
Dandelions on the Wind
is a sweet tale about the merging of two hurting hearts. The characters drew me, and I can’t wait to read more about their lives … and their love!”

“In
Dandelions on the Wind
, Mona Hodgson weaves a tale of broken promises, wounded hearts … and the power of forgiveness—a heartwarming reminder that we walk by faith, not by sight. Maren is a heroine you’ll cheer for!”

—CAROL COX, author of
Love in Disguise
and
Trouble in Store

All Scripture quotations or paraphrases are taken from the King James Version.

This is a work of fiction. Apart from well-known people, events, and locales that figure into the narrative, all names, characters, places, and incidents are the products of the author’s imagination or are used fictitiously.

All rights reserved. No part of this book may be reproduced or transmitted in any form or by any means, electronic or mechanical, including photocopying and recording, or by any information storage and retrieval system, without permission in writing from the publisher.

Published in the United States by WaterBrook Multnomah, an imprint of the Crown Publishing Group, a division of Random House Inc., New York.

WATERBROOK and its deer colophon are registered trademarks of Random House Inc.

Dedicated with love to my Aunt Marion, Aunt Pauline, and Aunt Nellie May, all living well with Retinitis Pigmentosa (RP)

N
ever mind that four months had passed since General Lee’s surrender. Maren never walked the apple orchard or the wheat field without careful watch for bushwhackers and jayhawkers. Four-year-old Gabi held tight to Maren’s hand while they followed Gabi’s grandmother to the field. When Mrs. Brantenberg’s walking stick sprung a branch in her path, the child’s gaze darted up the lane toward the orchard then back to the farmhouse and across the hillock to the five acres of wheat.

Maren drew in a deep breath in the hopes it would remove any tension from her own voice. “The war is over, little one.”
We should be safe
. “God is with us. Like
Oma
said, ‘Fear is not of the Lord. We cannot live in fear. We must trust God.’ ”

Gabi gave a quick nod, then began swinging Maren’s hand at her side.

Fear is not of the Lord. We cannot live in fear. We must trust God
.

Maren willed her shoulders to relax into the child’s playful arm swinging. Still, she’d heard too many stories about raiders from the women in the quilting circle to let down her guard. To believe the fighting would ever end. The memories of the Union jayhawkers traipsing through the orchard picking apples and taking the steer from the pastures remained fresh in her mind too. She glanced toward the cabin at the far corner of the property, past the orchard. Now empty. She’d only heard about the Confederate bushwhackers who had raided the farm last year, but little Gabi remembered.

Maren fanned the side of her bonnet against her ear to cool the onslaught of hot August air. Thankfully, she saw no sign of trespassers today. And if any outlaws did show their faces, Mrs. Brantenberg had her stick ready with a stack of sorrows backing it up.

Mrs. Brantenberg stopped at the edge of the field. This close, Maren could see that two women didn’t do as even a job of planting as she and her father had in the old country.

Gabi stepped up to the three-foot-high lawn, giggling. “They have whiskers like the cats do.” Her hands brushed the tips of the wheat stalks.

Bent, the widow plucked one head and rolled the grains between her fingers.

Maren did the same on the thinner area, where the stalks didn’t reach as high. The grain was soft and green inside. She didn’t need to taste it to know it’d be bitter. “Still a ways to go here.”

When a covey of bobwhites exploded from within the crop, Gabi cried out and fell to the ground.

Maren bent over the child. “Just thieving fly-by-nights. They learned their lesson, didn’t they?”

Gabi nodded. “They scared me.”

“Didn’t do my heart any good either.” Mrs. Brantenberg patted her chest. Then, smiling, she pressed the tip of her stick to the ground. “The wheat on the north end turned golden first. It’s more likely to be ready in just a few more days.”

Gabi’s little hand slid into Maren’s. Together, they tromped around the stand of shimmering stems, the whiskers tickling Maren’s arms.

This wasn’t the home Maren expected while traveling on the boat from Denmark four years ago. But back then, she’d still had more of her sight. Eight months ago, when the family that had taken her in gave up and moved away, Mrs. Brantenberg brought her out to the farm and provided her work in exchange for room and board. The widow, her granddaughter, and the quilting circle were her family here in America, but she missed her mum, her sister, and her little brother, left behind in the old country.

The promise to bring her family to America had disappeared, right along with Orvie Christensen. Lying in bed at night, all she thought about was going home to Denmark. But the only jobs she’d been able to find during the war barely covered her living expenses, with nothing left over to save for the cost of travel. Yet how could she stay not knowing how long she’d have vision enough to work on the farm? She needed to make the long passage home while she could see well enough not to be a burden.

About twenty yards from the north end, Mrs. Brantenberg stopped and they repeated the testing process. This time, when the grain separated between Maren’s fingers, she bit into a kernel and nodded to the widow.

Gabi stretched onto her tiptoes. “Is it sweet?’

Mrs. Brantenberg pulled another head from the stock and handed it to Gabi. “What do you think,
Liebling
?”

The
little one
rolled a kernel out of its sheath and bit into it like she’d seen Maren do. “Not sweet like Mr. Heinrich’s rock candy. Tastes like dirt.”

Mrs. Brantenberg tittered. “Well, most of us agree then—this section is nearly ready.” She waved along the northern edge. “Monday, the three of us will begin harvesting.”

Gabi’s stomach growled and she giggled. “The bear in my belly is hungry now.”

They all laughed. Even in the midst of work and careful watch, the child had a knack for easing their tension.

“It has been too long since breakfast. Gabi and I will fix us all an early supper while you tend the animals.”

As the trio walked back toward the farmhouse and barn, the sinking sun began casting shadows on the path. Maren’s deteriorating sight robbed her of colors in low light, leaving everything tinted in gray. Now she knew the trouble her father had suffered in his blindness. Her own stomach growling, she picked up her pace, hoping to reach the familiar inner yard before there was too little light to define the path. They’d worked in the vegetable garden right through the noonday mealtime, and she had chores yet to do before she could settle into the house for supper.

At the arbor, Mrs. Brantenberg and Gabi headed toward the house while Maren continued to the chicken yard. She needed to find a job in town where she could earn enough money to start saving for her return to Denmark. But they had the wheat fields to harvest this month, and then the twenty acres of apples would be ripe a few weeks after that. How could she even think of leaving the widow and dear Gabi alone out here?

“Shoo. Shoo.” She spoke the words as much to her own thoughts as she did to the chickens pecking at her bootlaces. She reached into the scrap bucket hanging on a nail and tossed handfuls of potato peelings and grain in a wide arc. The cackling chickens scattered to be first to the bounty.

Inside the stifling hot coop, Maren dodged the roost and reached into the first of the five nests along the back wall. After all the eggs were gathered, she felt for the pole and ducked under it, taking
the most direct route out of the smelly henhouse. Protecting her face with her hand, she stepped into the chicken yard, through the gate, and into the ruts leading to the barn. The parching wind stung her eyes and whipped her apron.

She folded one of the double-hinged barn doors and clamped it open, then stepped inside, squinting against the near darkness. The strong, sweet smell of the hay filled her nostrils. The cow scent was strong too, but not so sweet. Both reminded her of the farm her family had lost in Copenhagen. And the farm Orvie had promised her in his letters.

After Maren hung the basket of eggs by the door, she climbed the wooden steps to the hayloft. Cows bawled and horses whinnied below. Hay needed to be tugged from a stack and tossed over the edge into the swinging mangers at the stalls, then repeated on the other side. When she’d flung hay into Duden’s and Boone’s stalls, she dropped a couple forkfuls onto the center of the barn floor. At the top of the ladder, Maren brushed her hands together to dislodge any remaining hay stems from her woolen gloves before climbing down. Her plan was to feed the hogs and mules, milk the two cows, and then go inside for supper. She had planted her boots on the first two rungs of the ladder when a raspy baritone voice split the still air.

Maren jerked and her boot slipped, causing her chin to strike a step. Wincing, she released her grip and fell backward. Fear caught a scream in her throat. The fresh pile of hay on the floor broke her fall, but still she landed flat on her back. She fought to recover her breath and gather her wits. A staccato heartbeat pounded in her ears. She didn’t associate the deep voice with anyone who belonged on the farm.

Blinking, she willed her eyes to focus in her limited circle of vision. Brown curls swerved every which way on the head of a man she did not recognize. Scrambling to right herself, she edged toward the wall near the cow stall.

The Not So Secret Emails Of Coco Pinchard by Bryndza, Robert
Wolf at Law by Heather Long by Heather Long
Graphically Novel (Love Hashtagged #3) by Allyson Lindt
Andrea Frazer - Holmes and Garden 01 - The Curious Case of the Black Swan Song by Andrea Frazer
Dog Will Have His Day by Fred Vargas
CSS: The Definitive Guide, 3rd Edition by Eric A. Meyer
Diary of an Assistant Mistress by Teri Power
Carl Hiaasen by Nature Girl
Goldest and the Kingdom of Thorns by Joanne Durda
The Hunger Moon by Matson, Suzanne