Daughter of Fire and Ice 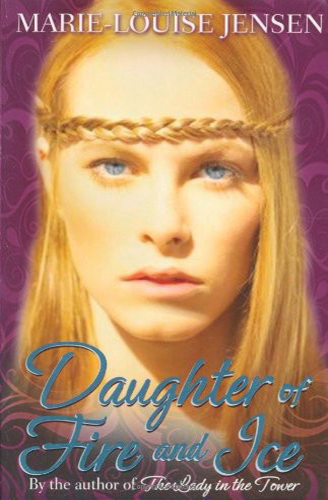 Oxford University Press is a department of the University of Oxford. It furthers the University’s objective of excellence in research, scholarship, and education by publishing worldwide in

The moral rights of the author have been asserted

First published in this eBook edition 2011

All rights reserved. No part of this publication may be reproduced, stored in a retrieval system, or transmitted, in any form or by any means, without the prior permission in writing of Oxford University Press, or as expressly permitted by law, or under terms agreed with the appropriate reprographics rights organization. Enquiries concerning reproduction outside the scope of the above should be sent to the Rights Department, Oxford University Press, at the address above

Thank you to everyone in Iceland who helped me with my research, especially Gudrun Bjarnadottir who gave me so much advice on clothing, dyes and plants and to Jón Pàll at the Settlement Exhibition in Reykjavik, who was a mine of information about the Viking age. And thanks to my friend Þorvaldur Danielson for his support.

I’ve used the Norse or old Icelandic calendar in
Daughter of Fire and Ice
. This is divided into twelve months just as our Gregorian calendar is today. However, the months do not run parallel to ours. They run mid-month to mid-month. Thus, for example, Harpa month, the first month of the summer half year, runs mid-April to mid-May. Harpa month and Góa month are believed to be named after a forgotten Norse goddess and god respectively.

I have found calendars from two different sources, one of which gives alternative names for a couple of months. Thus the month I’ve called Ram month also appears as Mörsugur, or ‘fat sucking month’. Lamb-fold time is also referred to as Skerpla month, named after another forgotten goddess.

All my characters are fictional in
Daughter of Fire and Ice
. I have taken the names from the old Icelandic sagas. Due to the extensive records that were kept in Iceland, and the strong oral tradition of reciting genealogies, the names of all the original settlers are known.

I wanted to write a new story, not rewrite any of the existing sagas, however, so I have been deliberately vague about where exactly in Iceland the story is set.

A sense of menace grew on me all morning. Not a vision. No glimpse of the future disturbed me. It was more a shadow of approaching danger. That was the first warning.

The second warning was the pounding of my younger brother’s bare feet on the earth outside the longhouse. I stood frozen, one hand still on the shuttle of the loom where I’d been working. The next moment he staggered through the open door.

Sigurd gazed at me, wide eyed with horror. I thought of running away, through the back door and out into the forest. But my parents were away. If we left the house empty, it might be burned to the ground. Just as our crops had been burned, and even our cowshed, after the animals had all been stolen.

We had an enemy. Bjorn Svanson. He was the chieftain of this district of Norway, and the bane of our lives. Ruthless and cruel. And on his way to our farm now.

‘He wants father. He wants this year’s tribute from him to give to the king.’ My brother was pale under his summer tan. He was only ten winters old and very frightened.

I was surprised how calm I was. As I put down the shuttle, I found my hands were quite steady. I could face him.

Murmuring prayers to Eir, the goddess of healing, with whom I had a special bond, I snatched a scarf up from a hook by the door and wrapped it around my hair to hide the golden shimmer. Then I stooped to the fire and scooped up some ashes from the edges where they had cooled.

‘Thora, what are you doing?’ asked Sigurd, surprised, as I smeared the ash across my face.

I glanced at him.

‘Looking as unattractive as possible.’

Under my breath, I added a swift prayer to Freya, the goddess of prophecy. She usually warned me of danger, but she hadn’t warned me of this visit. ‘Please let that mean I’m in no danger this time,’ I whispered to her. ‘Protect me and my brother.’

I could hear hoof beats approaching the house now. My heart started to beat more quickly as fear began to pulse through my veins. I had just time enough to fish a filthy apron up from behind the woodpile and tie it over my dress. It was stained with blueberry juice and it had been used for making cheese when we still had cows. I’d spilt whey all over it and it stank.

There was a hammering at the door; it was flung open and the chieftain strode in, flanked by two dogs. I suspected his men were standing guard outside in case anyone tried to slip out the back way.

‘My lord,’ I nodded to him, hiding my fear. ‘It’s a great honour that you call in person at our poor farm.’

Svanson was a relatively young man who had come to his inheritance early through his father’s untimely death. His father had been respected as a brave warrior and a just overlord. No one respected his son, though many feared him. He was a glutton and a heavy drinker, and his face and figure already showed traces of it. His eyes were bloodshot and his lips thick and fleshy. He had a paunch developing and a sword hand that was no longer quite steady. He also had the ugliest aura I’d ever seen. It was distorted with greed and cruelty, all the colours muddied and spoiled. I found him repulsive.

‘Your father’s not here?’ Svanson asked, glancing into the dark corners of the house as though father would be lurking there.

‘Out hunting,’ Sigurd replied before I could forestall him. It wasn’t true. My father and mother had set out early that morning, and hadn’t told us where they were going. It was harvest time, and they should have been cutting the barley. But our barley crop lay in ashes upon the ground.

A smile curled Svanson’s lips as he realized we were alone.

‘He’ll be back this evening,’ added Sigurd.

‘Out, whelp,’ ordered Svanson. ‘My business is with your sister.’

He took a step closer to me. Sigurd held his ground unhappily, torn between fear of this man and loyalty to me. I wanted to reach out and take my brother’s hand. I was afraid for both of us.

‘You’ll do as you’re told by your elders and betters, sissy girl,’ said Svanson roughly. He grasped Sigurd by the scruff of his neck and the seat of his leggings and threw him bodily out of the house.

I winced as I heard the thud of my brother’s landing and the laughter of the men outside. I was afraid of what they might do to him out there. He was just a child. But Svanson was walking towards me now. I backed away before him, heart thudding in my chest with fear, until I was up against the rough timber of the house wall. He stopped much too close to me and carelessly twitched off my headscarf. My fair hair cascaded down over my shoulders and I cursed myself for not braiding it this morning.

‘That’s better,’ muttered Svanson. ‘I thought for a moment you were letting yourself go. But you’re still as pretty as ever. You can’t hide it.’

I could smell Svanson’s breath in my face and turned my head away. He rubbed at the ash on my face with a thumb and I flinched away from him.

‘If you wish to speak to father about the tribute, you’ll need to come back another time,’ I told him, my voice trembling.

‘Let’s not pretend,’ said Svanson harshly. ‘Your father hasn’t got any money for the king’s tribute.’

‘No, you made certain of that,’ I retorted swiftly, glaring at him. I thought of the fires, and the missing sheep, cattle, and slaves. He had systematically destroyed our family’s livelihood this past year. Our farm had once been prosperous, my father wealthy. Svanson had robbed us and destroyed our crops until we were brought to the edge of destitution. All the families around here had suffered from his greed and brutality, but none like us. He wanted me. The knowledge made me prickle all over with fear and disgust, but it wouldn’t do to let him see that.

‘I don’t know what you’re talking about, girl,’ Svanson growled. ‘But I know it’s just as well you’ve lost none of your beauty. Your father has nothing else to give me in tribute. There’s only you.’

‘Are you thinking of giving me to the king?’ I asked sarcastically.

Svanson grasped my wrist and yanked me towards him. My breath quickened with terror. I was completely at his mercy. If only my parents were here. What had they been thinking of leaving me alone today?

Svanson reached behind me, untied my filthy apron with one deft pull and threw it into the fire. I knew an impulse to tear myself away and rescue it from the flames. We had lost almost everything we had this year. But I forced myself to remain still and passive. I was terrified of angering Svanson. He was bad-tempered and unpredictable.

I was afraid that he would take me away today, when there was no one here to protect me. No one would ever know for sure what had become of me. He could do that. There was no longer anyone in the district who dared stand up to him. I looked at his face, and then beyond it at the colours that swirled unpleasantly around his head and shoulders. What I could see reassured me. He was playing with me, like a cat plays with a mouse. He wasn’t yet ready for the kill.

Svanson put one hand none too gently on my throat and pushed up my chin.

‘Tell your father,’ he ordered, breathing in my face, ‘he has two days to hand over money or goods. Or I collect you instead.’

So saying, he bent forwards and kissed me swiftly on the mouth. I could smell the mead on his breath and feel the cold wetness of his mouth on mine. Anger gripped me. Without stopping to think, I slapped him. Then I gasped, horrified by what I had done. At once his hand tightened on my throat, squeezing till I could hardly draw breath.

Stand By Me by Blu, Cora
The Neptune Project by Polly Holyoke
The Stone War by Madeleine E. Robins
The Impossible Art of Falling (Impossible Art #1) by Sara Fiorenzo
Ellen McKenzie 03-And Murder for Desser by Kathleen Delaney
The Outsiders by Neil Jackson
Crazy in Chicago by Norah-Jean Perkin
Hidden Away by J. W. Kilhey
All Over the Map by Laura Fraser
The Musician's Daughter by Susanne Dunlap