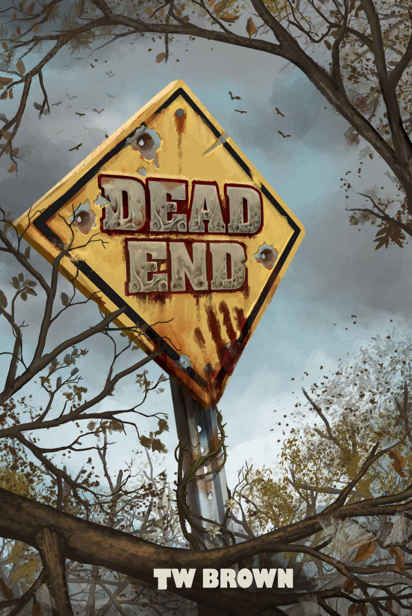 Other Titles by TW Brown

That Ghoul Ava: Her First Adventures

That Ghoul Ava & The Queen of the Zombies

That Ghoul Ava Kick Some Faerie A**

Next, on a very special That Ghoul Ava

That Ghoul Ava…on the Lam!

Book 12 of the
DEAD
series

The split-tree logo is a registered trademark of May December Publications LLC.

This book is a work of fiction. Names, characters, businesses, organizations, places, events, and incidents either are the product of the author’s imagination or are used fictitiously. Any resemblance to actual persons living, dead, or otherwise, events, or locales is entirely coincidental.

This book is protected under the copyright laws of the United States of America. Any reproduction or unauthorized use of the material or artwork contained herein is prohibited without the express written permission of the author or May December Publications LLC.

A moment with the author…

Finales can be so scary. After all, you have committed so much of yourself to a long-running series. And while you always knew that nothing could last forever, you tried not to think about it. After all, what new and exciting thing would you find to fill your time?

Believe me when I tell you that this book you are holding represents some agonizing moments for me as a writer. Take away the whole thing about this being the conclusion to a series that I have poured thousands of hours of my life into and simply consider that you hold a part of my dream in your hands.

When I was younger (like in junior high) I dreamed of being a writer. I had just finished Stephen King’s
The Stand
. Maybe it was simply because I did not want the story to ever end, but I remember thinking,
Is that it?
It just seemed so anti-climactic after the rollercoaster ride that the rest of the story had been. Still, I accepted it and, after a second, third, and tenth reading, I came to find peace in how Fran and Stu got to live “Happily Ever After” with Tom Cullen and a new baby in a world safe from Randall Flagg.

That was my first taste of something that would sink its hooks into me and never work free. The next thing was that fateful day when I first saw
Dawn of the Dead
in the theaters as part of a double-feature. That was another ending that made me yearn for more. Really? Peter and Francine taking off from the roof of the mall as the zombies reached skyward (don’t get me started on how they got up there or how some of those “feature” zombies seemed to regenerate—Nurse Zombie, Gun-toting Zombie and the one I named Chester Tate Zombie just to mention a couple).

How can that be the end?

I think we have all said that at some point in our lives when referring to the series finale of a book or beloved television program. I never appreciated the pressure of delivering a conclusion until now. Sure, I have the
Zomblog
series in my resume, but if you ask me for an honest answer, I don’t think I was really satisfied that I provided a finale as much as I did an end.

A finale just sounds like it should be spectacular. An end is just that…an ending. In my opinion, a finale should provide a sense of satisfaction for the person reading or watching it. The audience should read that last word and be able to lean back, sigh, and close their eyes in contentment.

I do understand that entertainment is a fickle mistress. What is one person’s “greatest thing ever” will be absolute drivel to somebody else. That is the nature of the beast. If that were not the case, we would all think that Michael Jackson’s
Thriller
was equal to Pink Floyd’s
The Wall
. I am not sure if I am making my point clearly, but what I basically want to say is that I know some of you will finish this and be prompted to write me a gushing letter of adoration, while others will (to put it bluntly) be pissed and rip me a new one. I’m okay with that. Although, it would be nice if you at least told me which one you were in the email subject line so I can be prepared.

Love it or hate it, I will always be okay with you telling me exactly how you feel. (Although, to that one young lady who wanted to be my “sugar mama” and keep me in luxury so that I could write twenty-four/seven, I appreciate it, but I really am happily married, and I do fear that you would find life with me far too boring since I hate talking to anybody when I write and can be very grouchy when disturbed.) I am a big boy and can accept criticism. I believe it only makes me a better writer. Case in point, I do feel that I really streamlined the Vignettes sections of these books by the time I finished
DEAD: Fortunes & Failures
thanks to the honest constructive criticism and feedback from a few dozen readers. Believe it or not, I almost killed the Vignettes section after that book. I would have if not for some wonderfully helpful input from readers who loved the Vignettes but had some suggestions on how they might be more cohesive.

All this rambling is my roundabout way of welcoming you to
DEAD: End
, the finale of the proper
DEAD
series. Proper? What do I mean by that? If you don’t already know, I will tell you in just a moment.

So, what can you look forward to in this (hopefully) Grand Finale? Well, I want to give you closure. Yes, the world will keep spinning after you reach that last page, but I want you to be able to feel good about or mourn the lives of the people you have come to know over the past few years. You know me well enough to know that anything can happen and nobody is promised a happy ending. However, not everything is bleak and dreary. I want you to have some moments where you can smile. That being said, this is still the zombie apocalypse.

That is the other thing you might have noticed as the series continued; zombies stopped being the focus a long time ago.  Yes, the zombies will still be there, but we are now well into the post-apocalyptic era and they just are not the scary monster they were in the beginning.

I do hope that you will reach the last page of each story line and take just a moment to let it sink in. Say your goodbyes and then move on to the next one. I would be VERY appreciative if you perhaps committed some of those thoughts on paper and then shared them with a review at the end. Of course you are also welcome to drop me a line and let me know directly—good or bad.

Now, some have asked what I will do next. I can say very happily that I will take a few days to relax and soak it all in. After a few pats on the back (self-inflicted or otherwise) I will dive into my horror/comedy series,
THAT GHOUL AVA
. Also, the
DEAD: Snapshot—{insert town here}
series will continue until people stop buying them. I can reveal here that Kevin and Catie will get (at least) a three book series involving their travels and adventures. Additionally, Adam, the journal keeping vigilante, will be getting his own series at some point in the future as well.

I have rambled enough, and I know many of you just skip this to get to the story, but for those who have indulged me, I will step aside right after I give some thanks to those I would be remiss in omitting.

I want to start by thanking my wife, Denise. She has never wavered in her belief in me as a writer or author or whatever you want to call me. I want to thank my Beta Readers: Melena Stacey-Duff, Nelson Wilbanks, Niamh Clancy, Heather Burns, Kary Lawrence, Dawn, Spengler, Candice Douglas, Tammy Gaylord Beard, Jeff Shoemaker, Sophie, and Caron Hirst. You did the hard part. You helped make this book a better, cleaner read and pointed out my many mistakes. I may have still missed a few, but that number would be much greater without your keen eyes and helpful suggestions.

Vix Kirkpatrick. Buddy, you have been on board for a long time. You have never stopped being my friend even when the cool kids bailed. You probably know this story better than I do. Thank you for everything.

Wanda Beers. You may be anonymous to some, but never to the people in my house. Your secrets are safe, but my gratitude is public.

To the men and women who matter—those who serve in law enforcement, fire departments, hospitals, and last but not least, the military. You make the world safer and give of yourselves every single day. Thank you is never enough.

Ms. Bose. You were the one who told me to write every single day. You taught and motivated me to chase my dream by encouraging my path down the zombie fiction genre with the words, “No story is ever done.”

Last, to you. You have read my books. Some of you despite being warned away…others just out of curiosity, and some because you really like my stuff. Whichever category you fall under, I would not be here today living my dream without you. Your support, emails, and reviews have been so wonderful and supportive. Thank you. Sincerely. Truly. And now…