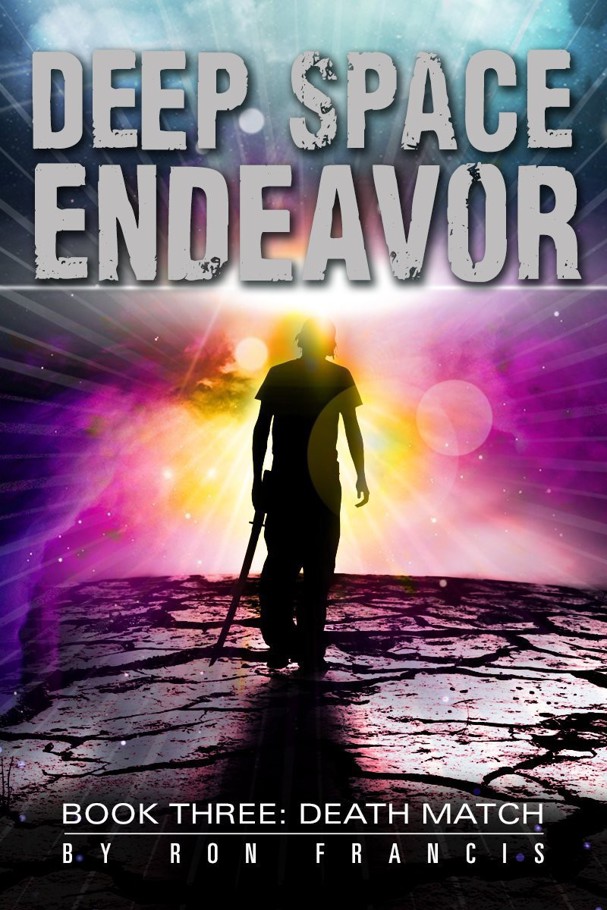 Admiral Natora: Second in Command of the Coalition Naval Command

In a dark corner of the empty landing bay, he hit the heavy bag again and again; muscles aching, sweat dripping from his body; he had to be ready. Roundhouse right, left knee, front kick and uppercut. He rained blows down on the heavy bag with combo after combo. He needed to make sure he was in top form, and the events of recent months made that a difficult task. He felt like he should be able to train longer. He had only been at it two and a half hours, and he could barely lift his legs to kick. He needed to rest, but he had to push himself. He would be facing a formidable opponent.
Just another five minutes, and then maybe the treadmill.
Suzy entered the landing bay with a worried look on her face as she made her way over to her Commanding Officer.

“Jesse, I’ve been looking all over for you, what are you doing down here in the dark?”

“Training! I’ve got to be at my best if I’m gonna win and make it back home in one piece. I still really don’t want to do this. All I really want is to go home to be honest with you. That, or Trinnus to study the workings of the Moving City. For the first time in a long while, I’m settled; content, you know. I think things might be looking up with Kimi a little, but I’m gonna give it some more time before I address it again.” He smiled sadly as he let loose his next barrage on the heavy bag. “I know Garrinoras wants to kill me and I know he wants this ship, and that’s why no one else can do this; but did they even consider alternate rescue plans? I just feel like they just assumed I’d come running to help, no matter what. Why would they think I wanted to help her, after everything that happened?”

She could see the weight of responsibility heavy on his shoulders and she knew that even though he said he was content now, he still would prefer to never see Cassie again. As that thought was running through her mind, she replied. “Jess, I know you’re not too excited about seeing Cassie again, neither am I, but there’s more than just her life and our former shipmates on the line. If they try one of the alternate rescue plans, they risk a war that could tear apart the Lawless Sector.” She knew he didn’t want to do this and she was worried about him. There were so many factors that were vying for attention in his mind right now, any one of which could get him killed if he lost focus at the wrong time.

“I know, but I’m finally back on my feet, our backup plan is in place and we are ready to continue our mission. This seems like it is going to be another dangerous delay, one that I’m not too keen on to begin with.” He hit the bag in frustration several more times as he spoke.

She noticed his strikes were not connecting with the force she was used to seeing, so she asked, “Jess, are you feeling alright?”

“You’re not hitting the bag very hard. Are you sure you feel ok? How long have you been working out?”

“A little over two and a half hours, why?”

She sensed he was being defensive as a way to cover the fact that he did not feel as good as he should. “Alright, Jess, it’s time to pack it up for the night. Let’s go eat some dinner.”

“Jess, come on, you have nothing to prove.” She knew he didn’t, but he was acting like he did, and that was one more thing she filed away in her mind to worry about later.

“Suzy, I’m trying to build my stamina back up. It hasn’t felt right since Pandara.” He had a faraway look in his eye as he spoke about the planet that almost killed him.

“You’re stamina is fine and you’re not going to do yourself any good if you’re too tired to fight when we get to Chawanas.”

“I’ll rest on Kaldor. The death match is set for two five-hour sessions each day. Right now. I’m tired after two and a half. Do you think Garrinoras is going to run out of steam in the middle of our fight or wait for me to catch my breath? If I stop moving, I die.”

“Come on, you’re not thinking clearly, Jess. Regardless of whether or not you have as much stamina as you used to, you won’t get it all back in the next three days. Not to mention, I doubt that at any point you’ll be hitting and kicking Garrinoras for two and a half hours straight, as much as you may want to. Now please, come have dinner with me. Or should I call Josiah and Collin to come drag you out of here?”

He looked at the worry in her eyes and relented, “Alright, give me about fifteen minutes to shower and change, and I’ll meet you in the galley.”

As the two of them left the landing bay,
Endeavor
continued to streak through light space on its way to Kaldor.

Endeavor
had finally arrived back at Kaldor. Suzy didn’t like long trips in light space and she wondered how she was going to deal with the four and a half month journey they would need to make if they missed the conduit. She knew what was waiting on Kaldor and then Chawanas and she hated that Jesse had to do this. She hated it even more because this would have been one of the few times he passed up excessive danger and his crew had actually talked him into it. He probably would have come to the same conclusion eventually, but his feelings over the way Cassie had treated him had definitely influenced his initial decision. She also didn’t think his body was fully recovered from Pandara. Jesse would never admit it publicly, but she knew him well enough that he wouldn’t have to. She could never remember a time where she had as much anxiety as she had right now. She was on the verge of prescribing herself some medication to calm her nerves.

As she sat alone in her quarters, her thoughts consumed her.
I don’t know if I could bear it if anything happened to him. I just can’t lose him. He has always been the one constant in my life. He held my hand so I wouldn’t cry in school when I was four. He held my hand again while I cried at my parent’s funeral when I was sixteen, and he forced his parents to take me in even though they didn’t have the money to support an extra child. He gave up his sports and worked to help them pay the extra bills so I could study. He sent a portion of his military pay home to help put me through med school, even while he was saving for his own wedding. When his tech made it big, he financed the recovery pod and gave me all the credit for it. He’s my brother and my oldest friend. He didn’t even hesitate to put himself in danger when the Pandaran attacked me. He’s my guardian angel, but who’s guarding him? Why is no one ever guarding him? He’s so close to finally finding happiness with Kimi. I just can’t lose him. This is my fault, I gave in when everyone wanted him to do it. He would have refrained if I didn’t want him to, maybe. Still, I should have stayed strong, instead, I gave my approval and he took the challenge. He always takes the challenge. Why does he always have to take the challenge? I just can’t lose him.
She looked in the mirror and noticed that tears had been falling down her cheeks. Hot tears had blazed trails down her flush cheeks. She had been so worried she didn’t even realize she had been crying. She quickly straightened herself out, threw some cold water on her face and left to meet the rest of the crew as they approached Kaldor.

As Collin brought
Endeavor
in for a landing in Kaldor City’s spaceport, Suzy began to prepare herself to see her old friends again. It felt weird that she thought of Wennagal, Enso and Ogen as old friends when the reality was that they had only known them eight months. It had only been four months since they had seen one another, but so much had happened in that short period of time that it really did seem like they were coming back to Kaldor for the first time in years. As the landing bay hatch lowered, the current mayor, who was also the soon-to-be Governor Valinor, and his adopted daughter, Kiah, waited with his special assignments task force to be the first to greet
Endeavor
‘s crew.

Josiah was the first to step out of the landing bay into the crisp, clean morning air. He didn’t know if Kaldor had seasons, but this felt like fall. He took a deep breath, breathing in the cool fall air which was so much better than the recycled air of the ship. Usually he didn’t notice too much, but with all of the extra guests, the ship’s air scrubbers were working harder than normal. He smiled politely as he was greeted by a warm embrace from the Mayor.

“It is good to see you again, Mister Mayor, I only wish it were happier circumstances that brought us back here.” The Mayor went on to embrace Collin as he was next off the ship, but Josiah could tell how worried he was about the whole scenario. His politician’s smile was in place, but his eyes told another story. He owed Jesse everything and was in no hurry to see the man who had saved his life meet Garrinoras.

As
Endeavor
‘s crew greeted their Kaldorian entourage, Wennagal introduced everyone to Lenk and Tioga while Sibbie and Teha immediately tried to pick up where they had left off with Collin. They were both very disappointed when Collin introduced them to Bessa but not entirely dissuaded from their agenda. Josiah introduced the two new members of
Endeavor’s
crew, Sergeant Rivada and Xanu, along with Sergeant Rivada’s soldiers and the Hyperians to their Kaldorian hosts.

Jesse was the last to exit
Endeavor
and he was lost in thought. Kiah, not noticing, ran up to him and gave him a big hug as he scooped her up with a big smile on his face. “How’s my favorite girl?”

“I am very well,” she smiled shyly as she continued to hug the man that had saved her life. “I missed you and Commando very much.”

“Well, we missed you, too.” He turned to the left and whistled loudly, and much to the enthusiastic young lady’s delight, Commando came leaping out of the landing bay, tail wagging. Jesse put Kiah down and she kissed him on his cheek before immediately beginning to play with her four-legged friend.

Wennagal had planned a dinner for
Endeavor’s
crew, which was also to be attended by his team, the Mayor, the Chairman and their companions from Ginderbar. He wanted to get everyone acquainted and reacquainted with one another. Afterwards he planned to go over some of the contingencies likely to arise since they were dealing with an adversary they were sure was going to try to trick or betray them. The goal was to get Cassie back alive, and avoid war in the process. Of course, no one wanted Jesse to get hurt or killed, but Jesse thought it almost seemed like a secondary concern.