Read Dragon of the Island Online

Dragon of the Island 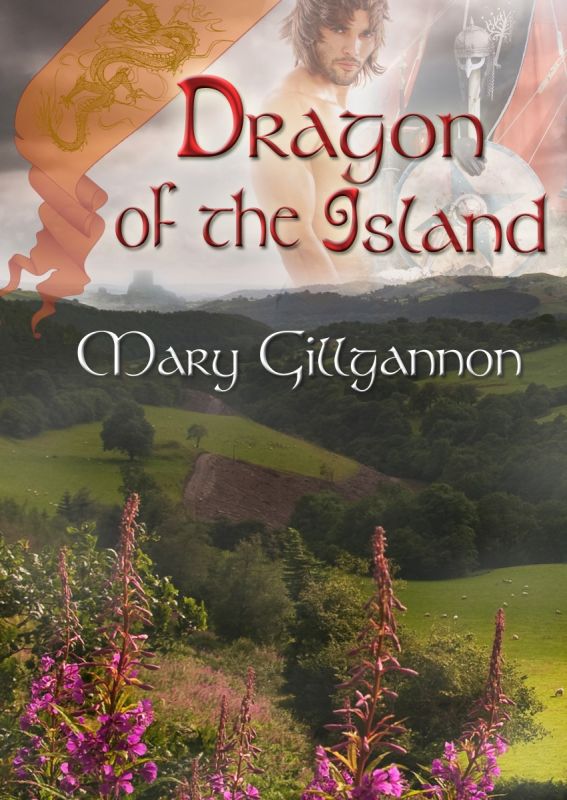 Dragon of the Island

No part of this may be used or reproduced in any
manner whatsoever without permission except in the case of brief
quotations embodied in critical articles and reviews.

This book is a work of fiction. Names, characters,
places and incidents are either products of the author’s
imagination or used fictitiously. Any resemblance to actual events,
locales, or persons, living or dead, is entirely coincidental. No
part of this publication can be reproduced or transmitted in any
form or by any means, electronic or mechanical, without permission
in writing from the Author.

To my Irish lover, Patrick

The Dragon had come.

Aurora pressed against the stone wall of the
gate tower, watching the advancing army spill over the green hills
and march toward the town. The warriors’ war cloaks and armor
glinted and flashed in the afternoon sun like the scales of a huge
beast. Its jaws were opening, preparing to swallow them up.

The Dragon of the Island, they called him.
Maelgwn the Great had risen out of the west like a thundercloud,
killing his own kin in his brutal bid for power. After forcing all
the other princes of Gwynedd to recognize him as overking, the
Dragon had left his fortress in the mountains of Wales and pressed
east. The old Roman town of Viroconium lay directly in his
path.

Aurora turned her eyes to her father’s
troops, gathered staunchly between Maelgwn’s army and the gates of
the city. The defenders were clearly outnumbered. The invading army
had dozens of archers and a huge cavalry force. Even if
Constantine’s army could survive the head-on charge, they could not
hold them off long. Aurora could imagine the invaders swarming the
city gates—just as the Saxons had, nearly a half a century before.
They would kill... and rape... and burn...

Aurora gritted her teeth, wishing for the
thousandth time that she were a man. Then she wouldn’t be so
defenseless. Then she would have a weapon to fight with when the
enemy arrived.

“My God, what are they waiting for?”

Aurora was startled from her thoughts by the
impatient voice of her sister Julia. Her mother, two sisters and
their ladies were crowded next to her in the tower. The other women
had ceased their frantic praying and were watching the scene below
intently. A puzzling stillness hovered over the battlefield. The
invading army was almost upon them, but there had been no battle
cry sent up, no drawing of swords or engagement of weapons. Aurora
saw Constantine and a handful of men riding out to meet the enemy.
It seemed they meant to talk before they fought.

Not even a whisper of breeze eased the
oppressive heat. Aurora imagined the agonized tension of the
soldiers below. The sweat would be dripping down their faces and
pooling beneath their heavy leather tunics, the fat, bright flies
tormenting the horses. In the tower, the women shifted awkwardly as
the minutes dragged on.

Aurora struggled to get a better view of the
battlefield, her thoughts turning hopeful. Her father—called
Constantine after the emperor—was a shrewd, persuasive man. He
might be able to talk Maelgwn the Great out of destroying the city.
The rich lands around Viroconium produced a bounty of grain and
livestock which were traded in Gaul for luxuries such as wine, oil,
furniture—even gold. There was a chance they could use their wealth
to bribe the enemy into leaving them alone.

The angry voice of Julia jolted Aurora from
her thoughts.

“Even if Maelgwn agrees to a truce, how can
we trust him? He is a madman, a barbarian. They say he once burned
a whole fortress in a rage, killing everyone inside. How do we know
that he won’t do the same to us? How do we know he won’t just take
our gold and then kill us?”

“Hush, Julia!” whispered Aurora’s mother,
Lady Cordelia, in a voice harsh with anxiety. “There’s no point in
making everyone more frightened than they already are. That’s just
talk—we don’t even know if it’s true.”

“Of course it’s true. I overheard Papa. He
wouldn’t have repeated the story if it weren’t true!”

Julia’s words rekindled Aurora’s fears. The
invaders weren’t civilized men. Even if her father made a truce,
the enemy couldn’t be trusted not to destroy the town.

There was movement on the battlefield. A
portion of the enemy army broke away from the main force and slowly
began to follow Constantine and his men toward the town gate. The
soldiers were moving nearer, and Aurora could almost make out
individual men. She searched for Maelgwn—the ruthless man who
controlled the savage beast that waited below them, ready to tear
the heart out of her beloved Viroconium. She spotted a crimson
banner marked with a golden dragon. Right below it was a
dark-haired man riding a black stallion.

No wonder he was called “Maelgwn the Great,”
Aurora thought in awe. Even from a distance she could sense the
power which seemed to radiate from the foreign warlord as he
handled the massive charger with ease. She stared at his long black
hair. She had not guessed that the enemy was dark—somehow she had
imagined Maelgwn as a blond giant like Hengist or Horsa, the
legendary Saxon warriors who had nearly crushed the Roman Britains
a generation ago.

As the enemy leader approached, Aurora
suppressed a shiver. In one of the old stone buildings in the town
there was a crumbling mosaic that depicted the god Dionysus. The
god was portrayed riding a panther, his long wavy hair swirling
around his shoulders, his eyes savage and exultant. The Welsh
warrior looked like the mosaic come to life!

There was a shout from one of the soldiers
guarding the gate below.

“Constantine is going to make a truce. All
the women and unarmed men should go to the great hall to await the
announcement there.”

The women looked around in confusion. None
of them had expected that Constantine would welcome the enemy into
the city. Several of the women, including Carina, Aurora’s other
sister, began to pray again. Aurora reached out to touch her
mother’s shoulder.

Lady Cordelia’s voice was calm and steady,
her expression determined. “If Constantine brings Maelgwn and his
men into the city, then they are our guests. We will treat them
accordingly.”

“I won’t play hostess to those... those
barbarians!” Julia sputtered.

“Indeed you will,” her mother answered. “You
will not dishonor your father by being rude to our guests. Come, we
must go down and make ready for them.”

The women watched numbly as Lady Cordelia
gathered up her skirts and began to climb briskly down the ladder
to the ground. Aurora was nearly the last to escape the hot tower,
and in the few moments of waiting, she considered her mother’s
words carefully. If Constantine was bringing the enemy into the
city, he must have some plan. A crude barbarian would be no match
for her clever, well-educated father. Aurora hurried down as fast
as she could, anxious to see what her father had in store for the
foreign warlord and his men.

She raced ahead of her mother and the other
women, determined to reach her father’s feasting hall before
everyone else. The great hall stood in the center of the town,
looking cool and welcoming in the afternoon heat. The timber
structure was built along the same lines as the Roman basilica it
had replaced, with steps leading to a porticoed facade. Aurora ran
lightly up the steps and across the scarred mosaic floor of the
entryway. She found a place near one of the carved supporting beams
and pressed her body tightly against the slippery wood, determined
to keep her vantage point as the crowd increased.

People poured in around her, filling every
inch of space—first the townspeople and the soldiers, then the
enemy troops. The room was surprisingly quiet, and Aurora was
reminded of two groups of dogs, meeting for the first time and
sniffing the air, testing it for the sharp scent of danger. Just
when Aurora decided she could not endure the tension a moment
longer, Constantine moved to the end of the room, climbed the dais
and gestured for quiet.

“People of Viroconium,” he began. “Today we
have avoided a great battle and the destruction of our town and
homes.” Constantine’s voice was rich and melodic, and Aurora felt a
surge of pride for her father.

“But there is a price for our continued
peace. As your leader, I feel that it is only fair that I tell you
what has come to pass.”

The leader of the invaders stepped forward
impatiently. The man was so tall he did not even need to climb the
dais to be seen, and his voice—despite the strange accent—was deep
and commanding.

“I am Maelgwn of Gwynedd,” the man began.
“Your leader”—Maelgwn nodded curtly to Constantine—”has seen the
wisdom of surrendering to me. Because of that, we will be generous.
We will let you live.”

There were smiles from the bold warriors who
accompanied Maelgwn, and angry looks among the townspeople. Aurora
felt her anger rising as well. Who was this man to speak so
arrogantly? The people of Viroconium were not defeated yet. The
enemy commander had no cause to gloat.

Maelgwn began to recite a long list of the
tribute he expected. He demanded gold and precious metals of
course, but also grain, cattle, sheep and other produce.
Surprisingly, he also asked for craftsmen—men skilled in masonry,
carpentry, enamelware and pottery-making.

Aurora listened to the list intently.
Maelgwn’s terms were harsh, but not unbearable. She knew the people
of Viroconium would gladly part with some of their wealth if it
meant they would be left in peace.

“Finally, in as much as you will be a
subject people, submitting to my authority as your overlord, I
would seal the alliance by taking one of Constantine’s daughters as
my wife.”

Maelgwn’s last words drew a sharp sound of
surprise from the crowd, and Aurora felt her throat tighten in
fury. How dare he? She and her sisters were not possessions to be
bartered off to keep the peace. Constantine would never hear of
such a thing, he would not allow it! She looked toward her father,
still standing on the dais. Constantine’s head was bowed slightly,
his face furrowed with lines. Aurora wanted to run to him, to throw
her arms around him and beg him to refuse this outrageous request.
She was held back by the people packed tightly around her, and she
could only watch in dismay as Constantine lifted his head and faced
his conqueror.

“Maelgwn of Gwynedd,” he said slowly. “We do
agree to your terms.”

“Now we will feast with you, and after we
have satisfied ourselves, I will choose my queen.”