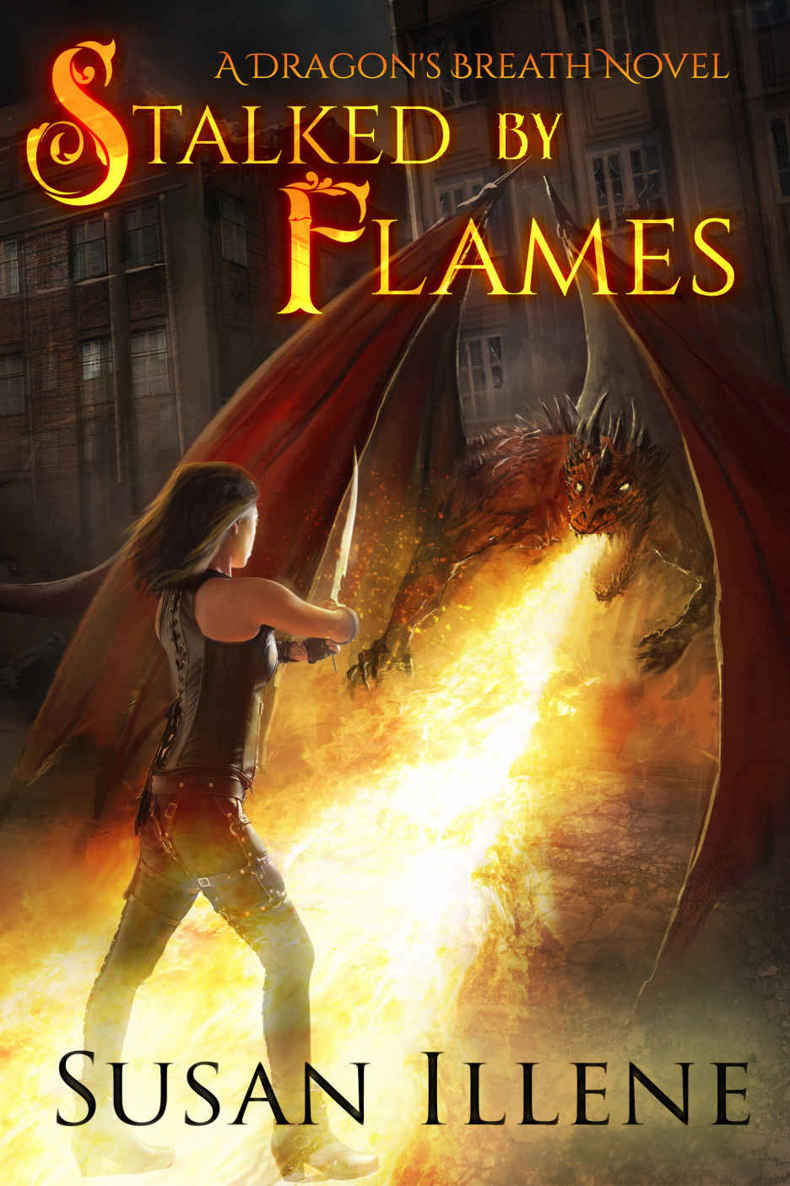 This book, whole or in part, may not be copied, scanned, or reproduced by electronic or mechanical means (including photocopying or the implementation of any type of storage or retrieval system) without the express written permission of the author, except where permitted by law. Please do not participate or encourage the piracy of copyrighted materials. Purchase only authorized editions.

Images obtained for the creation of this novel’s cover were licensed for use from Teresa Yeh photography and Jeff Brown Graphics. Design by Claudia McKinney at Phat Puppy Art.

This book is a work of fiction. Names, characters, places, and events portrayed within its pages are products of the author’s imagination or are used fictitiously and are not meant to be construed as real. Any resemblance to actual persons, living, dead, undead, or mostly dead is purely coincidental.

To my former unit at Fort Bragg. Thanks for teaching me to persevere no matter the obstacles in my way.

I should have known the day was going to be bad when I stepped outside and saw vivid purple and red northern lights in the sky—at nine in the morning, in Oklahoma. Checking my water bottle, I didn’t find anything suspicious in the clear liquid. Then I caught other people staring upward, too, gawking. Thank God. I’d begun to wonder if the hit of acid I’d dropped two years ago had come back to haunt me.

The lights faded and the sky turned dark and ominous shortly after that, which should have been my next clue to stay inside and wait it out. Not to mention it was a Monday and doomed by default. But I didn’t, so I only had myself to blame when the clouds unleashed bucket loads of rain on me while I loaded all my personal possessions into the backseat of my truck.

That wasn’t the end of the troubles, though. Not even close.

Right after turning in the keys to my apartment I discovered my truck had a flat tire on the front. Someone had slashed it, leaving the poor thing to look like an undercooked soufflé. I spent the rest of the morning at the shop getting it replaced.

Then right as I was about to escape Norman city limits, my friend Trish called to remind me I hadn’t turned in my library books yet. It was almost as if fate itself intervened so I couldn’t leave Oklahoma anytime soon, though I suspected she’d wanted to say goodbye one last time.

Another storm approached from the west as I balanced a high stack of books in my arms, heading for Bizzell Library. With the semester over and graduation just two days ago, there weren’t many people lingering on campus. Just a few students lounging on the grass and a guy feeding the squirrels. Most people had gone home for the summer. Much like I hoped to do.

The ground shook and two of my books tumbled to the sidewalk. Damn earthquakes. They were getting more frequent with every passing month, and the experts couldn’t explain them. Oklahoma had a reputation for tornadoes—not earthquakes.

A few dozen other places around the world were experiencing similar problems. Extreme weather, earthquakes, and an unsettling sense of doom that left everyone feeling the end was nigh. Of course, I didn’t buy what those crazy guys on street corners shouted.

I leaned down and grabbed the fallen books and put them back on top of the others before resuming my walk toward the library. Now that the tremor had passed there wouldn’t be another one for at least thirty minutes. At least, that’s how it usually went. None were on the scale of the big California earthquakes, but they were strong enough that you felt them when they struck. The constant shaking was beginning to take its toll on structures. I kept waiting for a building to come crumbling down.

A student exiting the library held the doors open when I reached them. I mumbled my thanks to the guy and kept going. Five minutes, tops, and I’d be out of there by noon. Texas wasn’t having all these problems. I couldn’t wait to get home to my parents’ working ranch where I could put my shiny new business degree to use. The paperwork alone had become a mess since I’d left, and I had a lot of plans to help increase profits.

Trish, my best friend, stood behind the checkout counter. We’d been roommates during our freshman year. I’d never been good with people except those closest to me, but she’d poked and prodded until I let her into my inner circle. If not for her forcing me out of my reclusiveness, my college experience might have been limited to classes and my dorm room. I still didn’t like interacting with people much, but she’d helped me improve my social skills a lot.

Trish had graduated on Saturday too, but she planned to stay on for her master’s program. Her boyfriend, Justin, was chatting with her. I wasn’t surprised to see him there.

If you looked at them, you wouldn’t think they were a good match. She had wild curly red hair, pale skin, and a curvy figure. He had brown hair in a military cut, tanned skin from a lot of time spent outdoors, and a toned physique. Trish wore bright, colorful clothing to match her personality; Justin stuck with earth tones. He never joked and took everything seriously. Even their interests weren’t the same. From the time they’d started dating two years ago until now I’d never understood how they stayed together.

Neither of them noticed me walking up. Not even when I cleared my throat.

She rolled her eyes. “Maybe we should
frack
later and really shake things up.”

“You’re just trying to change the subject.” He let out a sigh of exasperation. “The way they’re drilling these days—it’s important we do something about it.”

Justin was an environmental science major who really got into his studies. Before college, he’d served in the army for six years in the infantry and had done two tours overseas. Now he was enrolled in the Reserve Officers Training Corps (ROTC) program with only one year left to go. The guy was all about serving his country in whatever way he could. Now he thought he could do more as an officer.

It made him an interesting choice for Trish, considering she took life a lot less seriously than he did, unless you counted books. Whether they were fiction or non-fiction she practically lived in them. Probably the reason she’d chosen to major in library science.

I dropped my stack of books on the counter in front of her. “Am I interrupting something?”

“Oh, look what the earthquake shook up,” she said, giving me a once-over. “Bailey, you look like crap.”

I tucked a stray strand of my black hair behind my ear. Whenever it rained, it fell limp and lifeless. Cutting it to shoulder-length for the summer hadn’t given it any of the body the stylist had promised. I suspected my make-up was ruined, too. It was definitely one of
those
days.

“There’s another storm approaching,” I explained.

“Not to worry. I brought an umbrella,” Justin reassured her, patting his backpack.

He was always prepared for anything.

“So you’re really out of here?” Trish asked, drawing my attention back to her.

“The truck is packed and the tank is full.” I’d even loaded up on water and snacks so I wouldn’t have to stop before the state border.

She scanned the books into the system. “Make sure you call me when you get home.”

It would only take a little over four hours to drive to my stepfather’s ranch southwest of Dallas. I’d arrive well before dark and maybe even in time for one of my mother’s home-cooked meals. After eating like a bum since Christmas break, I was ready for some real food.

A rumble of thunder sounded above our heads.

“Yeah, I will,” I said, glaring up at the ceiling.

Trish came around the counter and gave me a hug. I had to admit I was going to miss her and all the fun we’d had together in the last four years. We planned to meet again at the end of the summer, but that seemed a long time away. Too bad she couldn’t come live on the ranch with me. I could use a buffer against my brothers.

“Are you sure you don’t want to wait until the storm passes?” she asked, pulling away.

“It’s not raining yet and the radar showed it clear to the south. I’ll be fine.”

The ground jerked beneath our feet. Our eyes widened, and we grabbed each other for balance. Then it started shaking faster, sending us tumbling down. Screams rose up around us and books spilled from nearby shelves, crashing to the floor. Was this it? Was this the earthquake that would finally do us in? Maybe those folks preaching on street corners had been right after all.

Trish and I huddled against the counter as more than a minute went by with no sign of it letting up. Justin kneeled next to us muttering about fracking, but unlike his usual bravado he looked worried this time. We’d had some earthquakes recently, but nothing bad enough to send my heart racing into overdrive. It had to be at least a 6.0 on the Richter scale. Maybe higher.