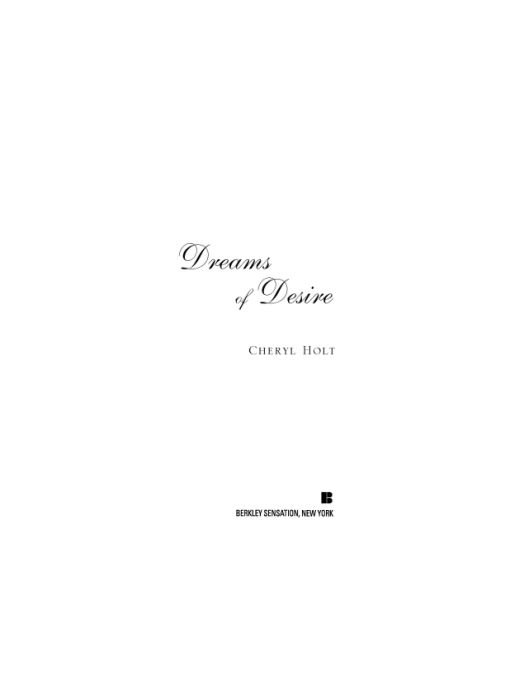 Table of Contents
Title Page
Copyright Page
Chapter 1
Chapter 2
Chapter 3
Chapter 4
Chapter 5
Chapter 6
Chapter 7
Chapter 8
Chapter 9
Chapter 10
Chapter 11
Chapter 12
Chapter 13
Chapter 14
Chapter 15
Chapter 16
Chapter 17
Chapter 18
Chapter 19
Chapter 20
Chapter 21
Chapter 22
Chapter 23
Chapter 24
Chapter 25
Epilogue
“CHERYL HOLT DELIVERS WHAT READERS DESIRE.”*
PRAISE FOR CHERYL HOLT AND HER NOVELS
“The queen of erotic romance.”
—Book Cove Reviews
“A scorching novel that titillates as she explores a woman’s deepest fantasies and brings them, red-hot, to the page. But there’s more than just great sex in Holt’s romances.”
—*Romantic Times
“Cheryl Holt is magnificent.”
—Reader to Reader Reviews
“[A] master writer.”
—Fallen Angel Reviews
“From cover to cover I was spellbound . . . Truly outstanding.”
—Romance Junkies
“The action [is] intense and the love scenes are explicit, which makes [this] a doubly fantastic page-turner.”
—Night Owl Romance
“A classic love story with hot, fiery passion . . . dripping from every page. There’s nothing better than curling up with a great book and this one totally qualifies.”
—Fresh Fiction
“Packed with emotion, sensuality, and surprising twists and turns. Holt has come up with the perfect combination of intrigue, sensual love scenes, and tender emotion, which I haven’t read in a historical romance in a very long time. Just too delicious to pass up. Happy reading!”
—Romance Reader at Heart
“This book pulls you in and you won’t be able to put it down.”
—The Romance Studio
Berkley Sensation Titles by Cheryl Holt
PROMISE OF PLEASURE
TASTE OF TEMPTATION
DREAMS OF DESIRE 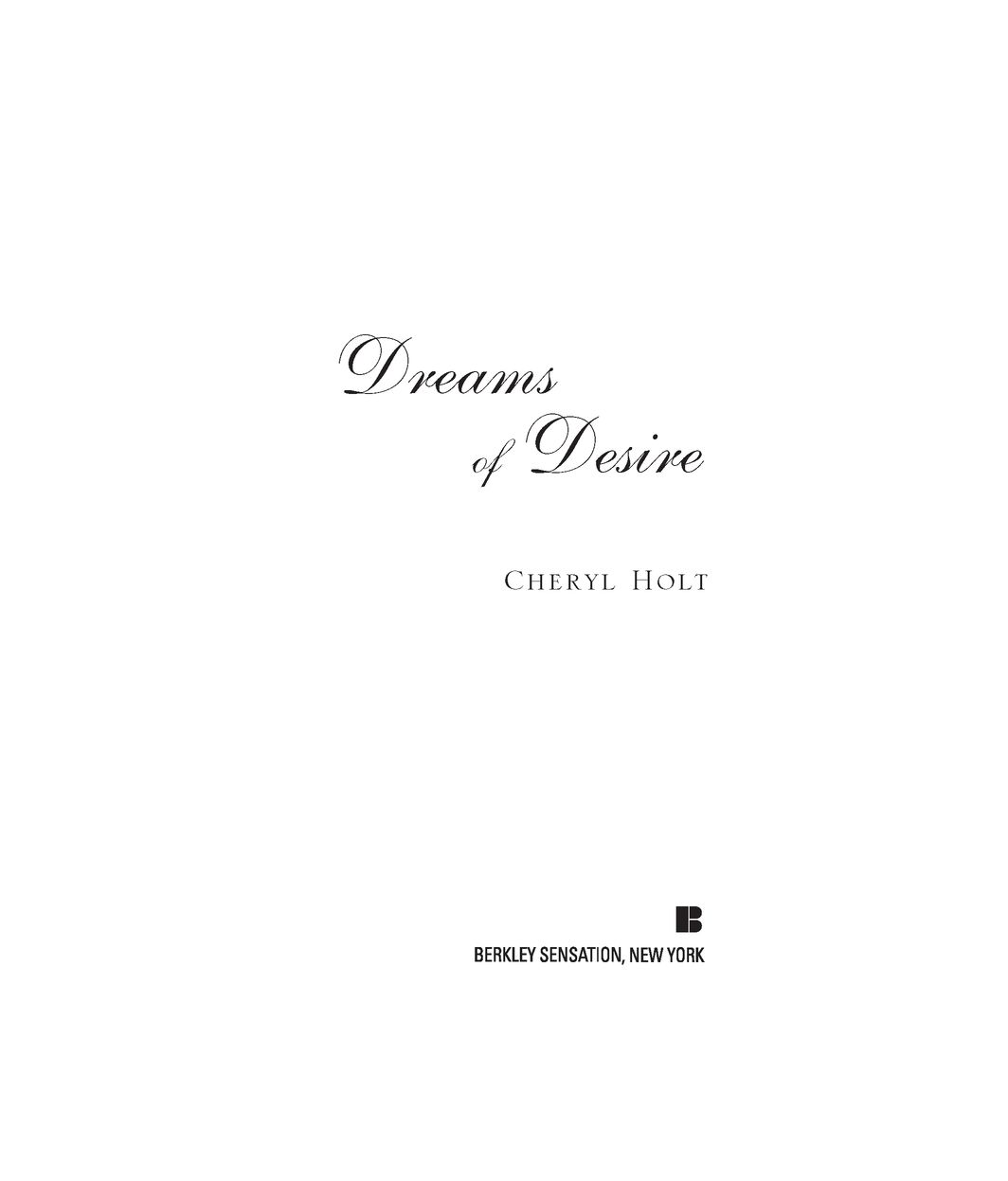 PENWORTH HALL, RURAL ENGLAND, AUGUST 1814 . . .
“I might deign to hire you, Miss Lambert.”
“I hope you will, Lord Penworth.”
“But you would be expected to exhibit the utmost decorum at all times.”
“Oh, absolutely. I wouldn’t have it any other way.”
Lily Lambert sat in her chair, staring across the massive oak desk at the arrogant, officious aristocrat John Middleton, Earl of Penworth.
He was extremely handsome, with dark hair and piercing blue eyes, broad shoulders, and excessive height. But good looks couldn’t mask the fact that he was an overbearing boor.
She’d been eager to serve as companion to his two wards and his fiancée, but now, she wasn’t so sure.
When she’d agreed to come for the interview, Mrs. Ford—owner of the Ford Employment Agency—had warned her that Penworth could be fussy and domineering, but no amount of notice could have prepared Lily for how unpleasant he truly was.
She’d been in his presence for all of five minutes, and he’d done nothing but chastise and complain. What an onerous boss he would be! He didn’t appear to like servants very much. Or females. Perhaps it was simply
female
servants whom he detested.
She kept her expression blank, not by so much as the quiver of a brow providing any evidence of her own level of aversion to his rank and status.
For the prior decade, she’d been nanny, governess, and companion to the spoiled offspring of nobles just like him, and she’d endured plenty of nonsense. Because of her dismal history, her opinion of him was very low—even though she scarcely knew him.
She wondered if he was the sort to seduce his maids, but she thought he wouldn’t be. He was too conceited, too set on being marvelous. He’d never stoop to fraternization.
“I’m a hard taskmaster,” he said, intoning it like a threat.
“And I’m a dedicated worker.”
“If I issue orders, they must be instantly obeyed.”
“I would be yours to command.”
“I’ll brook no sloth or insubordination.”
“I wouldn’t dream of idleness or rebellion.”
He snorted at that. “I won’t have you down in the kitchen, criticizing me over your supper—a supper I have supplied in my own house.”
“I am loyalty personified.”
“I demand fidelity and constancy.”
“I’m constant as the day is long.”
“But are you devoted? Can you be trusted?”
“Of course I can be trusted.”
He meticulously studied her, as if she was an agitator bent on causing trouble. Then he held up the thick file Mrs. Ford had sent. It was filled with glowing letters of recommendation, but all of them were forged. Lily had written them herself.
She was petite and pretty, and she had labored in grand mansions occupied by top-lofty husbands who were used to taking whatever they wanted, so she’d fended off many advances. With mischief exposed, the wife of the miscreant was never inclined to be rational.
Lily had been fired—through no fault of her own—more times than she could count, and she refused to starve merely because an oblivious noblewoman couldn’t make her spouse behave.
Being all alone in the world, Lily had no family to lean on for support, so she had to do what was necessary to get by. If financial security meant drafting a few fake letters, so be it, and the positive reports weren’t really false.
She
was
a dedicated worker. She
was
reliable and steady. She
was
kind and courteous, so she suffered no qualms about furthering her claims of proficiency, and she’d never been caught out.
In her experience, the person hiring was always in a hurry, needing someone to start immediately, so references were never checked. Lily acted competent, thrifty, and educated, so people were easily convinced that she was precisely who—and what—she said she was.
“You have an impressive resumé,” Penworth remarked.
“I try.”
“Yet I must admit that I’m wary.”
“Of what?” she snapped before she could stop herself.
He’d flustered her, and her composure slipped. She hastened to shield any reaction.
“How old are you, Miss Lambert?”
“Twenty-five, milord.”
“You’ve had numerous positions. Why so many? Are you prone to quitting? Will you pack your bags after a few weeks? Will you leave me in the lurch? I would hate to find myself trapped in Scotland with my wards unattended.”
He was guardian to eighteen-year-old twins, Miss Miranda and Miss Melanie Newton. They were daughters of a friend who’d perished from fast living.
They were accompanying Penworth on his annual hunting excursion to his castle in Scotland, as was his fiancée, Lady Violet Howard. She was the same age as the twins.
Of all the dreadful situations for which Lily was remotely qualified, having to spend the autumn traipsing after a trio of rich, indolent adolescents had to be the worst available option. She viewed the coming ordeal with a nauseating resignation, but while she didn’t particularly want the job, she couldn’t afford to decline it.
After the disaster at her last post—what she referred to as the
incident
with her employer’s husband—she was anxious to flee London for a bit. In case any gossip leaked out, she had to be far from Town so stories could fade before she returned.
Her ability to obtain work was dependent on a stellar reputation, and she was determined to hide until the storm had passed.
“Your questions are understandable, Lord Penworth, but if you look closely, you’ll see that I have perfectly logical reasons for my frequent moves.”
“Those being?”
“I was companion to several elderly ladies who died, so the jobs ended.”
“I suppose,” he allowed, as if she should have been so accursedly loyal as to have stayed on after her employer was deceased.