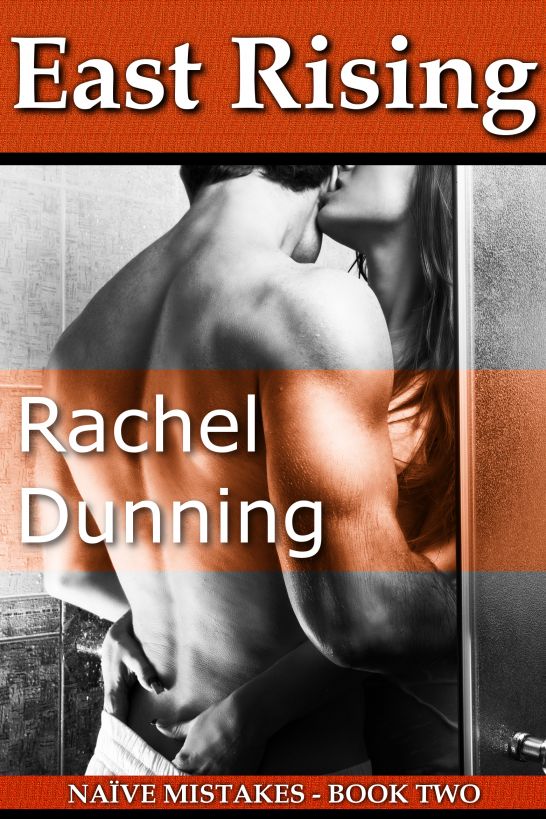 The moral right of the author has
been asserted.

Obtained from Shutterstock and used
with permission.

No part of this book may be used or
reproduced in any manner whatsoever without written permission of
the author, except in the case of brief quotations embodied in
critical articles and reviews.

This book is a work of fiction. Any
references to historical events, real people, or real locales are
used fictitiously. Other names, characters, places and incidents
are products of the author's imagination, and any resemblance to
actual events or locales or persons, living or dead, is entirely
coincidental.

Discover other titles by Rachel
Dunning at Smashwords.com:

For
those who took the time to share
a few kind words with me about Book One — in an email, in a
comment, in a tweet. Thank you.

This one's for you.

BOOK THREE, GETTING IN TOUCH, (AND A LITTLE ABOUT THE
AUTHOR)

All efforts have been made to make Book Two
of the Naïve Mistakes trilogy stand on its own. You do not
necessarily have to read Book One to pick up on the story where it
continues. However, doing so is highly recommended for a fuller
appreciation of the characters' histories, and of the story
itself.

I screamed, muffled screams, into the
leathery glove of the man I could not see but who smelled strongly
of body-wash and tobacco. I screamed for the aching throb on the
top of my right foot where the coffee pot had landed and for the
searing pains now shooting up my shins from the scalding
liquid.

But, mostly, I screamed because of the two
men who raced past me, heads wrapped in face masks and guns in
hands, up the stairs and to Conall's room. I fought the man who
held me. I tried to get a grip on him, but his other arm was to my
neck and he squeezed, just slightly, so that I knew, if I resisted,
I'd be choked to death.

I saw him looking at me at Starbucks. At
first I imagined it had been one of those mistaken glances where
both pairs of eyes lock on each other, take in as much of the other
as possible and then keep moving.

But when I looked again, as my head had been
turning from the supermarket cashiers (this Starbucks was in a
supermarket) and to the door, his green eyes were locked on mine
again.

And he was grinning. A hardly noticeable
grin, but a grin.

Internally, I smiled, and
my chest felt warm like I'd swallowed a shot of tequila followed by
firewater. Outwardly, my gaze locked briefly on his. He had a short
buzz cut, a sharply chiseled face, maybe twenty-two years old. And
then I kept moving my head.
Nothing to see
here buddy! Move along now!

In the moment straight after, I thought of
Conall. And why I'd come to England to work. And the heat in my
chest went cold. I bowed my head and dropped my gaze to the ground,
defeated.

The guy was there again the next day, at the
same Starbucks, same time, twelve-forty-five. My lunch break.

As I walked in the door and took in the
scene of the likely retired ninety-year-old in front of me, the
off-green couches and the distinct clang of English accents, his
gaze pierced into me, pausing me momentarily (In space? In time?
Somewhere...)

I felt a noticeable thump in my chest. I
focused on little of this buzz-cut blonde guy in his white tee
except for his lily-leaf-green eyes. I've always been a sucker for
eyes. Conall's eyes are blue. A Mediterranean blue I'd swum in as
he'd put his fingers inside me and brought me up from drowning
water into sweet, blissful air and freshness...

A woman bumped into me from behind. "Oh,
sorry, dear," said the old lady with a cane, hair as white as her
vitamin D deficient skin.

"No, it's fine, I
was..."
I was thinking about Conall
Williams, again, and about this guy who, yes, is still looking at
me. And grinning, again?

I felt my skin warm at my cheeks, that same
firewater heat burn in my chest, and I smiled back at him this
time. I flirtatiously curled a lock of my hair behind my ear. Then
I squeezed my legs tight, not letting him notice, and got my
coffee.

I sat at the window.
Mystery Man sat at the same settee as the day before, reading a
magazine (I couldn't tell for the life of me what it was), and
sipped his coffee. I tried to get through the paperback I'd bought
(
On Dublin Street
,
by Samantha Young) at one of the hospice stores in town for fifty P
(which is something like eighty American cents although, after
three months, I'd stopped converting) but the steamy love scene I
was reading about made me sweat as I looked out into a parking lot
which was being belted by sheets of icy rain.

No, it was far from hot. Not even indoors.
The sweat on my skin was from the book... Or maybe from Mr. Green
Eyes...

Like one of those beams you
hear about in science fiction flicks, I felt green-eyed buzz-cut
grab my head from its gaze outwards, to him, now at the door, and
fucking
smiling
at
me. Only the smile said something else now. It said,
Now we're playing.

I bit my bottom lip, did that
curl-behind-the-ear thing again, but when I looked out the window
to find mystery dude, he was gone. I craned my neck, stretching out
to look for him, the coffee in my hand slowly burning my fingers
until the coffee won and my gaze returned to it. I let it go,
fingers lightly burned.

On the third day, buzz-cut guy didn't
return. He was a man by size, but a boy by his looks. His face
looked young and naughty, carefree, just as I had been not so long
ago. Same on the fourth day — no Mystery Man. Friday became
Saturday, Sunday. On Monday he wasn't there still. And this seemed
all too familiar to me. The only difference is buzz-cut hadn't been
inside me. He hadn't taken all of me with him and left me bare,
with no explanation, no official closure. Just a piece of meat
hanging at a butcher shop, ready to be taken and used by the next
sick fuck who needed a meal.

Leora: I'm tired of waiting. I've been here
three months. When can we meet?

If I'd had guts, I'd have
added:
...or else I'm gone for
good.
But I was too afraid he'd act on
that. No, I wasn't desperate. No, I wasn't chasing him around the
globe. I'd decided to travel Europe and that's what I was doing.
Only I'd started it early. January is not a good time to go around
Europe with a backpack, neither is February. It was March now. I
had nothing left for me back home in the states, in my expensive
condo that nearly echoed with my calls inside its emptiness (except
for when Maria was there, sweet Maria who always looked out for me
and cooked for me and was there for me when I needed someone —
unlike my mother, who can't even cook for herself, let alone
me.)

Kayla had practically moved
in with Brad. The two of them were so much an item and "having such
unbelievable sex, like, three times a day on an average day" that
it wasn't helping, in the cold winter months, to be with her. It's
not that Kayla dumped me. She didn't. It's that she moved on, found
what she always needed, what we all need. Love. Or as close to it
as can be found. Brad was —
is
— a good guy. Kayla deserves that.

And me? No, I wasn't running around the
world chasing the man who'd entered my soul so deeply I could think
of nothing but him in the cold New York nights that had followed
after he'd left me in the lurch, despite promising me he'd be back
a week later. What I wanted was closure. What I wanted was for
Conall Williams to be the fucking man I thought he was when I'd met
him. The man who made my skin tingle with pleasure as he'd blown on
it after wetting me with his tongue. If things were going to end,
Conall was going to have to tell me to my frickin face.

And that is what I was doing here, in
England. Well, that, and trying to figure out what the hell I was
going to do with my life, regardless of Conall. Because, after
school had ended, so had the simplicity which it had brought:

Wake up. Go to school. Bitch about Bianca
Henshaw and her drug-dealing pimp of a boyfriend. Pump weights.
(Although I'd stopped doing that so much here. Who'd have thought?)
Party on a Friday. Do it again the following week.

After Conall had left, and school had ended,
going to college had seemed to me to be the final nail in the
coffin of a life which seemed to be over before it had really
begun. Because isn't that how we all die? Little by little, day by
day, as our dreams get stomped on by fate?

I couldn't do it. And so I faced up to my
mom, told her I didn't "give a fuck how much money you keep from
me, I'm going to Europe for a year!"

And I did, and here I was, three months
in.

"Hey love!" cried Dani as
she walked into the Starbucks. Only, with her accent, it came out
as
'ey luff!
I'd
noticed that: many of the English didn't pronounce their H's or
their T's (although when they actually say the letter H as itself
they say
haytch
.)

The Other Guy Who I Really
Missed never spoke like that. He spoke like someone straight out of
Cambridge, or Oxford (which he
was
from.) And there I was again, still thinking of
Conall...

"Hey, honey," I said,
putting my paperback face down, open, on the table. Dani grabbed it
with her small, pudgy fingers. She picked it up, glanced at it
cursorily, then put it back down. Dani wasn't fat as such. She was,
well, "rounded." She'd said once about her weight:
It's the curse of a typical English diet.
Big-arse English breakfast and lots of beer on the weekends.
Doesn't stop me from getting shagged, so why bother worrying about
it?

I didn't doubt her. With
her crystal blue eyes and bottle-blonde hair, small rounded lips
and lightly rouged cheeks, she was the kind of girl who probably
got a guy's testosterone pumping very quickly. And then there was
also that other benefit of being "rounded" — her cup size. And she
didn't play it down, not at all, pushing her chest out whenever the
boys ordered pints of Guinness and Heinekens at
Jolly Roger
(where we both worked),
batting her eyes, lightly caressing guys' hands as she passed them
their drinks. Dani didn't only take home the better tips, she took
home the better guys.