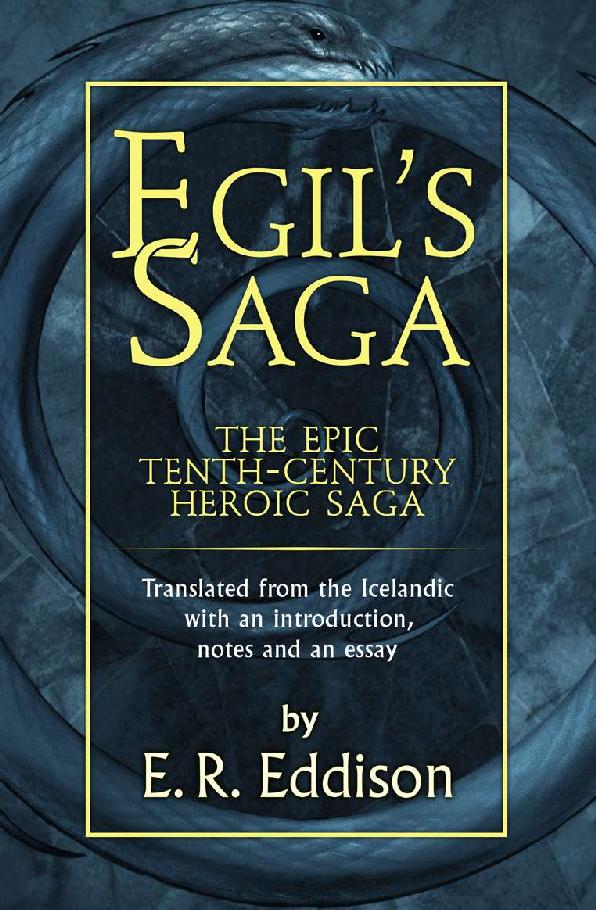 E. R. Eddison asserts the moral right to be identified as the author of this work.

A catalogue copy of this book is available from the British Library.

All rights reserved under International and Pan-American Copyright Conventions. By payment of the required fees, you have been granted the non-exclusive, non-transferable right to access and read the text of this e-book on screen. No part of this text may be reproduced, transmitted, down-loaded, decompiled, reverse engineered, or stored in or introduced into any information storage and retrieval system, in any form or by any means, whether electronic or mechanical, now known or hereinafter invented, without the express written permission of HarperCollins.

AND TO A NOBLE ICELANDIC LADY,
SVAVA ÞÓRHALLSDÓTTIR
OF
Hvanneyri

I DEDICATE THIS BOOK

Chap.
I. Of Kveldulf and his sons

II. Of Oliver and Solveig

IV. Of the battle off Solskel

VIII. Of Thorolf and Bard Bryniolfson

IX. Of the battle of Hafrsfirth

XI. Of the faring of King Harald into Halogaland and his guesting with Thorolf Kveldulfson

XII. Of the evil speech of those sons of Hildirid

XIII. Of Thorolf’s sending of the scat to King Harald and gifts therewith

XV. Of more lies and slanders of those sons of Hildirid

XVI. Of Thorolf Kveldulfson and the King

XVII. Of Hildirid’s sons and their gathering of the Finnscat, and of their new lies and slanders

XVIII. Of the King’s sending of two brethren and their robbing of Thorolf’s ship

XIX. Of Thorolf’s harrying in the Wick and of counsel given him by Kveldulf

XXI. Of rede taken for an onset against Thorolf

XXII. The fall of Thorolf Kveldulfson

XXIII. The slaying of Hildirid’s sons

XXIV. The sorrow of Kveldulf

XXV. Of Skallagrim’s going to the King

XXVI. Of the children of Duke Gutthorm

XXVII. Of the slaying of Hallvard and Sigtrygg: and how Kveldulf and Skallagrim fared to Iceland

XXIX. Of the works of Skallagrim

XXXI. Of the children of Skallagrim

XXXIII. Of Biorn’s faring to Iceland

XXXIV. Of Skallagrim and Biorn

XXXV. Of the birth of Asgerd: and how Thorolf Skalla-grimson went with Biorn to Norway

XXXVI. Of the King’s son Eric, and Thorolf Skalla-grimson

XL. Of Egil’s childhood and upbringing

XLI. Of Biorn and Thorolf and King Eric; and of Egil and Arinbiorn

XLVIII. Of guesting with Earl Arnfid: and how Thorir the Hersir spake with the King concerning those sons of Skallagrim

XLIX. Of the dealings betwixt Egil and Eyvind Braggart

L. Thorolf and Egil in England

LI. Of Olaf the Scots-King, and others

LII. Of Olaf the Scots-King’s warring against England

LIII. The battle on Winaheath

LIV. The second day’s battle on Winaheath: with the fall of Thorolf Skallagrimson

LVI. Of Egil’s wedding and of his home-coming; and of his faring abroad the second time and his suit against Bergonund at the Gula-Thing

LVII. Egil made outlaw from end to end of Norway: of his vengeance taken upon Bergonund and others, with how he laid a Scorn upon King Eric and the Queen and came home again to Iceland

LVIII. Of the death of Skallagrim

LIX. Of Egil’s faring abroad the third time: with how he was cast ashore in England and was fallen into the hand of King Eric Bloodaxe and Queen Gunnhild

LX. How Egil quoth his drapa that is named
Head-ransom
in King Eric’s hall in York

LXI. Of Egil’s life given him by the King

LXII. Of Egil’s faring to Norway with Thorstein Ericson, the sister’s son of Arinbiorn the Hersir

LXV. Of the dealings betwixt Egil and Atli the Short

LXVI. Of Egil’s home-coming and dwelling in Iceland: the children of him and of Asgerd

LXVII. Of Egil’s going abroad once more to Norway, and his guesting with Arinbiorn in the Firths

LXVIII. Of Egil’s claiming of the heritage of Ljot whom he had slain, and how Arinbiorn brought that claim before King Hakon, and with what issue

LXIX. Of the harrying of Egil and Arinbiorn in Frisland, and of their parting

LXX. Of the Vermland scat, and how King Hakon would send Thorstein Thorason to get it in, other else to get him gone out of the land

LXXI. Of Egil’s journey into Vermland and his guesting with Armod Beard

LXXII. Of Egil’s leave-taking of Armod, and his coming to Thorfinn’s

LXXIII. Of Egil’s coming to Alf the Wealthy

LXXIV. How Egil came to Earl Arnvid and had the scat of him, and of the Earl’s charge unto his men concerning Egil

LXXV. Of Egil’s bringing of the scat out of Vermland and of his great fights against the Earl’s men that sat for him in Eidwood

LXXVI. Of the bringing of the Vermland scat to King Hakon, and of the King’s faring into Vermland and those eastern parts, and of Egil’s coming home to Iceland

LXXVII. Of the burning of Thord Lambison; and of the giving in marriage of Thordis, Egil’s step-daughter, to Grim of Mossfell

LXXVIII. Of the wedding of Thorgerd, Egil’s daughter, to Olaf the Peacock: of Egil’s loss of his sons Bodvar and Gunnar; his
Sons’ Wreck
and his
Arinbiorn’s Lay
; and of his old age in Iceland and the friendship betwixt him and Einar Jingle-scale

LXXIX. Of Thorstein Egilson, and of the death of Asgerd, Egil’s wife, and how Egil shifted house from Burg to Mossfell

LXXX. Of Steinar, the son of Onund Sjoni, and his high-handed dealings with Thorstein Egilson

LXXXI. Of the slaying of Thrand, and of the suit at law betwixt Steinar and Thorstein

LXXXII. Of Egil’s award in the suits between Steinar and Thorstein

LXXXIV. Of the end of the dealings between Steinar and Thorstein Egilson

LXXXV. Of the last days and death of Egil Skalla-grimson

LXXXVI. Of the finding of Egil’s bones

LXXXVII. Of the Myresmen’s kin that are come of Egil’s blood and line

L
IST OF
A
BBREVIATIONS

I. Books for English Readers

IV. General Note on the Verses

M
AP OF THE COUNTRYSIDE ABOUT
B
URGFIRTH

E
GIL SKALLAGRIMSON
of Burg is the main actor in this history, not its author. Who its author may have been we do not know, and probably never shall. The time is a thousand years ago: the place the northlands, generally Norway or Iceland. Certain famous scenes (the battle of Winaheath and the great drama of the
Höfuðlausn
in Eric’s hall at York) are staged in England, and this in itself may be thought to give this saga a special interest to English readers. But quite apart from such accidents of staging, no Englishman, I think, can read the book attentively without becoming aware that this is not a foreign book but curiously his own, curiously English. The accent and manner of the story, the characters in it, their instincts and reactions and, in a subtle and fundamental way, their whole outlook on life, seem native to us; and if this is surprising it is only because we have grown accustomed to regard as distinctively English many qualities that have come down to us through the Norse strain in our ancestry.

The present edition is meant first for the man in the street, and only secondarily for the expert or scholar. The Icelandic sagas, of which
Egil’s Saga
is one of the most important, are documents of interest to inquirers in many fields, history, anthropology, comparative law and custom, philology. That interest they hold in common with a thousand musty chronicles. But the sagas have another quality which they share only with a few of the great literary masterpieces of the world: the quality of vivid, unstaled and undauntable life. If they are to-day, after so many hundred years, still read and re-read in every farmhouse in Iceland, it is from no obsession with the bones of a dead past, but because the sagas are replete with individual character and action; because they are swift, direct, dramatic; because on their pages real men and women play out their everyday existence on the stage of the world uninterrupted by extraneous judgement or comment, and disguised by no specious but false lightings of romance.

The general reader, then, I have had mainly in mind. For his sake I have kept the pages of the translation free from the distraction of footnotes: I have confined the Notes at the end largely to points the elucidation of which is helpful towards the fullest enjoyment of the story and (a very different and much more troublesome matter) an understanding of the verses which occur here and there: I have included in the Introduction such general facts about the settlement of Iceland by the Northmen, the state of society in the North in the heroic age, and the nature of the classic literature as such a reader may be interested to know of if he takes up the book with no previous knowledge of the subject. Further I have, by the addition of genealogical trees, chapter-headings, and a carefully framed index, done all I could to smooth away what is the only serious obstacle met with on a first acquaintance with the sagas: the difficulty on a first reading of carrying in one’s mind the many different persons, and sorting out the major from the minor characters.