Read Fear in the Forest Online

Fear in the Forest 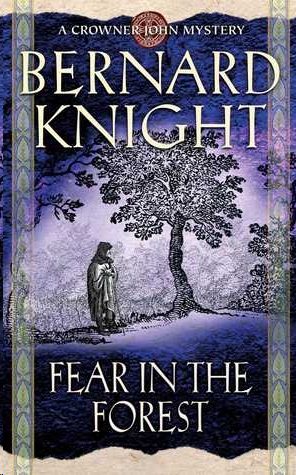 FEAR IN THE FOREST

THE ELIXIR OF DEATH

THE MANOR OF DEATH

A PLAGUE OF HERETICS

ACCORDING TO THE EVIDENCE

DEAD IN THE DOG

FEAR IN THE FOREST
A Crowner John Mystery
Bernard Knight

This ebook is copyright material and must not be copied, reproduced, transferred, distributed, leased, licensed or publicly performed or used in any way except as specifically permitted in writing by the publishers, as allowed under the terms and conditions under which it was purchased or as strictly permitted by applicable copyright law. Any unauthorised distribution or use of this text may be a direct infringement of the author’s and publisher’s rights and those responsible may be liable in law accordingly.

First published in Great Britain by

This eBook first published in 2014 by Severn House Digital

The right of Bernard Knight to be identified as the Author of this work has been asserted in accordance with the Copyright, Designs & Patents Act 1988.

A CIP catalogue record for this title is available from the British Library.

Except where actual historical events and characters are being described for the storyline of this novel, all situations in this publication are fictitious and any resemblance to living persons is purely coincidental.

Over the years that the Crowner John stories have appeared, many people have provided invaluable advice about various aspects of life and law in the late twelfth century. In this book, once again the staff of the West Country Studies Unit at Exeter have been as helpful as usual, as have Professor Thomas Watkin and the staff of the Law Library of the University of Wales Cardiff. My good friend Susanna Gregory, author of the well-known Matthew Bartholomew series of historical mysteries about Cambridge, kindly gave me some more information about medieval dress. Finally, I would like to acknowledge the unfailing interest and encouragement of both my publisher, Kate Lyall Grant and script editor, Gillian Holmes.

In medieval times, much of England was appropriated by the kings as Royal Forest, a practice reaching its peak in the twelfth-century reign of Henry II, when almost a third of the country was taken over. Though much of this land belonged directly to the King, the rest did not – but still the monarch wielded his forest regime over it, to the increasing resentment of the barons and other landowners. In fact, this was one of the factors which led to Magna Carta being forced on King John in 1215. Three of its clauses were concerned with limiting the oppression of the forest laws; three years later there was even a separate Charter of the Forest.

In those days, the word ‘forest’ did not necessarily mean wooded land – it meant areas, including open country, where certain wild beasts and the greenery they fed upon were protected so that the King could have sole hunting rights, to the exclusion of even the owners of the land where the animals roamed. These beasts were carefully classified, the main ones being the ‘venison’ – the hart and the hind (red deer), fallow and roe deer, the hare and the wild boar, lesser game being the fox, marten, wolf, coney (rabbit) and squirrel. All the vegetation, the trees, coppices, bushes and pasture, was known as the ‘vert’, an important distinction from the ‘venison’.

Apart from the enjoyment of the hunt, which was the main sport of those times, the King gained much financial profit from the forests – from the sale of meat, timber, rights of pasture, building permits and the establishment of forges, tanneries and brew-houses. He could also give, rent or sell these profitable amenities to others, including religious houses.

To enforce his rights, the monarch established a separate system of forest laws, courts and officers, which was harsh and oppressive. The penalty for killing a deer was mutilation or death, and even gathering firewood could attract a fine or imprisonment. The foresters who policed these lands were notorious for their rapacity and corruption; they usually received no salary and some even paid to hold their jobs, as the opportunities for extortion were so great. In 1204, the landowners of Devon paid a huge sum to King John to give up some of the Royal Forest outside Dartmoor and Exmoor, but at the time of our story a considerable part of the county was still under this iron rule.

Coroners, established in September 1194, had many legal and fiscal duties involving dead bodies, wrecks, royal fish, fires, assaults, rapes, etc., but could also be given any special investigation on an ad hoc basis, by means of a royal commission, charging them with a particular task on behalf of the King, as happens in this story.

Apart from a few rare gold coins, the only money in circulation was the silver penny, which was often cut into segments for use as lower denominations. The shilling, mark and pound were not coins, but nominal values, the shilling being twelve pence (equivalent to the present 5p), a mark two-thirds of a pound (about 66p) and a pound 240 pence (100p).

The language spoken by the common folk in Devon at that time was mainly Early Middle English, unintelligible to us today, but some retained their Celtic tongue, similar to Cornish, Welsh and Breton. The speech of the ruling classes was Norman French, but the Church used Latin, as did virtually all written documents – though only about one in a hundred people could read and write.

Many of the main characters in this story actually existed in history, such as the sheriff, bishop, archdeacons and burgesses of Exeter – though the coroners were unrecorded until the middle of the next century. The remaining names are authentic for the period and place, almost all being taken from the court records of the Devon Eyre held at Exeter in 1238.

Officers who regulated the use of forest land for ‘agisting’ – pasture and forage for cattle and pigs, for which live-stock owners were charged a rent.

A brewed drink, before the advent of hops – derived from an ‘ale’, a village celebration where much drinking took place.

Unlike the modern legal meaning, an appeal was an accusation by an aggrieved person, often a relative of a victim, against another for a felonious crime. Historically it preceded (and competed with) the Crown’s right to prosecute and demanded either financial compensation or trial by combat or the Ordeal.

An arbitrary fine on a person or community by a law officer, for some breach of the complex regulations of the law. Where imposed by a coroner, he would record the amercement, but the collection of the money would normally be ordered by the royal justices when they visited at the Eyre of Assize.

An order made by a law officer, including a coroner, to ensure that a person, whether suspect or witness, appeared at a court hearing. It resembled a bail bond or surety, distraining upon a person’s money or goods, which would be forfeit if he failed to appear.

Originally the defended areas, sometimes concentric, around a castle keep (‘motte and bailey’) but later also applied to the yard of a dwelling.

Overseer of a manor or estate, directing the farming and other work. He would have manor reeves under him and himself be responsible either directly to his lord or to the steward or seneschal.

A division of the forest, of which there were four in the Dartmoor forest. Each was under the jurisdiction of a Verderer.

A servant responsible for providing drink in a household – the origin of ‘butler’.

A freeman of substance in a town or borough, usually a merchant. A group of burgesses ran the town administration and in Exeter elected two Portreeves (later a Mayor) as their leaders.

A priestly member of the chapter of a cathedral. Also called a prebendary. Exeter had twenty-four canons, most of whom lived near the cathedral. Many employed junior priests (vicars) to carry out their duties for them.

The administrative body of a cathedral, composed of the canons (prebendaries). They met daily to conduct business in the Chapter House, so-called because a chapter of the Rule of St Benedict was read before each session.

A close-fitting cap or helmet, usually of linen, covering the ears and tied under the chin; worn by men and women.

The last of the religious services of the day, usually in late afternoon or early evening.

Has several meanings, but could refer to a senior commander, usually the custodian of a castle, which in Exeter belonged to the King – or a watchman who patrolled the streets to keep order.

A senior law officer in each county, second only to the sheriff. First formally established in September 1194, though there is a mention of the coroner in Saxon times. Three knights and one clerk were recruited in each county, to carry out a wide range of legal and financial duties. The name comes from
custos placitorum coronas
, meaning ‘Keeper of the Pleas of the Crown’, as he recorded all serious crimes, deaths and legal events for the King’s judges.

More correctly ‘couvre-chef’, a linen headcover, worn by women, held in place by a band around the head, and flowing down the back and front of the chest. Termed ‘head-rail’ in Saxon times.