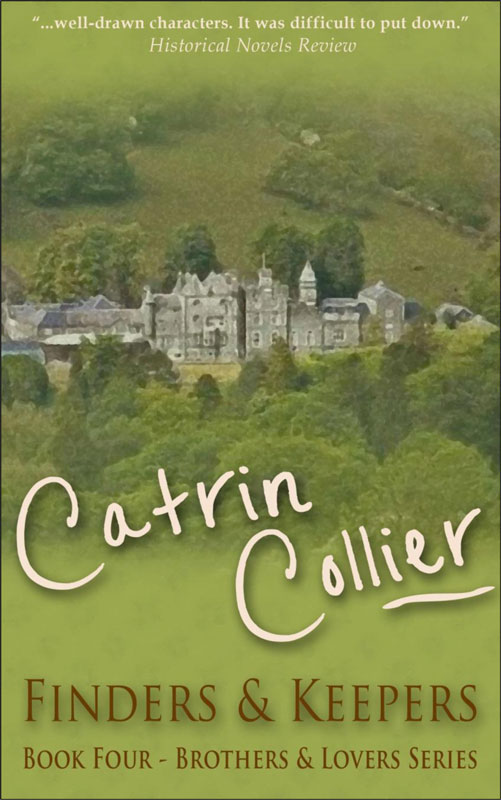 First published in Great Britain in 2005 By Orion

First published in paperback in Great Britain in 2006 by Orion

This edition published by Accent Press 2013

The right of Catrin Collier to be identified as the author of this work has been asserted by her in accordance with the Copyright, Designs and Patents Act 1988.

All rights reserved. No part of this publication may be reproduced, stored in a retrieval system, or transmitted, in any form or by means, electronic, mechanical, photocopying, recording or otherwise, without the prior permission of the copyright owner.

All the characters in this book are fictitious, and any resemblance to actual persons, living or dead, is purely coincidental.

Catrin Collier was born and brought up in Pontypridd. She lives in Swansea with her husband, three cats and whichever of her children choose to visit.

Murder of a Dead Man

By Any Other Name

For Richard Pettit and Victoria Hilliard, who married on 19 June 2004 at All Hallows Church, Liverpool. Not only did they have the sense to find and keep one another, they also chose the best man for the post â Ralph Watkins.

I would like to thank everyone who helped me research this book and gave so generously of their time and expertise.

Martin Gover, who now owns Craig-y-Nos Castle Hotel, for giving me a guided tour of the castle, showing me old photographs and relating its history. Without a doubt, Craig-y-Nos would have been demolished, the fate of so many Welsh buildings of historical importance, if he hadn't somehow found the money and energy to transform it into the sympathetically renovated, impressive hotel, wedding venue and outward bound centre it now is.

If Madame Patti could return she would instantly recognize her old home.

All the dedicated staff of Rhondda Cynon Taf's exceptional library service, especially Mrs Lindsay Morris for her ongoing help and support. Hywel Matthews and Catherine Morgan, the archivists at Pontypridd, and Nick Kelland, the archivist at Treorchy library.

The staff of Pontypridd Museum, Brian Davies, David Gwyer and Ann Cleary, for allowing me to dip into their extensive collection of old photographs and for doing such a wonderful job of preserving the history of Pontypridd.

Deirdre Beddoe for her meticulously documented accounts of women's lives in Wales during the last century.

The writer Edith (Mick) Courtney, a former patient of the sanatorium at Craig-y-Nos, where three of her sisters died of tuberculosis, for sharing her painful memories of life there and also for founding Swansea Writers' Circle, a group that has been instrumental in helping scores of budding writers to take the first faltering steps of their career, including me. Without the encouragement I received from the published and experienced writers of Swansea my manuscripts would probably still be languishing, hidden and unread.

My husband John and our children Ralph, Ross, Sophie and Nick, and my parents Glyn and Gerda for their love, support and the time they gave me to write this book.

Margaret Bloomfield for her friendship and help in so many ways.

My agent, Ken Griffiths, for his friendship, inspiring imagination and sales technique.

And all the booksellers and readers who make writing such a privileged occupation.

And while I wish to acknowledge all the assistance I received, I wish to state that any errors in
Finders & Keepers
are entirely mine.

Again, I have taken the liberty of taking my fictional characters and placing them in actual locations.

Madame Patti's home, Craig-y-Nos Castle, was sold after her death in 1919 to the Welsh Memorial Trust, who turned the building into a sanatorium. The death rate for patients admitted with tuberculosis remained at 80 per cent until the advent of antibiotics revolutionized the treatment of lung disease in the 1940S and 1950s.

In later years Craig-y-Nos was used as a geriatric hospital. It finally closed in the 1980s and although several attempts were made to save the building, gardens and the exquisite small theatre, which Madame Patti had constructed as a miniature copy of Drury Lane, none was successful, and it fell into a sad state of decay until Martin Gover bought it â and the 160 buckets set under the leaking roof.

Craig-y-Nos Castle and Country Park are part of the Brecon Beacons National Park, a designated conservation area of outstanding natural beauty. You only have to walk through the country park to see why Adelina Patti, who could have lived anywhere in the world, chose to make her home here. The castle, grounds and park are now open to the public throughout the year.

Llanfyllin Workhouse in Brecon was closed after the Second World War and the buildings were used by a local hospital. This in turn closed in the early 1990s and the site was taken over for use by a theological college.

There is a website â
www.a-day-in-the-life.powys.org.uk
â which gives further information on the social history of Powys.

The farm I renamed the âEllis Estate' exists under another name and can be seen on the left-hand side of the Brecon Road, 5 miles above Craig-y-Nos. Local legend attributes the building of the imposing house and outbuildings to a family who lost their fortune in the South Sea Bubble. The estate remains impressive and the wild and beautiful scenery around it has remained unchanged for centuries.

Most of the cottages from which the tenants were evicted during the years of rural depopulation are now inhabited. Some have been bought and restored by incomers, who have come to love Wales as much as the natives and contribute so much to the ever-changing tapestry of Welsh life.

Harry braced himself for the inevitable judder when the train drew into Pontypridd station. He adjusted his cream felt derby to a jaunty angle, picked up the overnight case and suitcase he had moved from the carriage into the corridor, opened the door and stepped down to be deafened by a scream.

âThere he is! Bella, Mam, over here! Harry!' His fourteen-year-old sister, Edyth, hurtled towards him.

âOw!' He dropped his bags and reeled back when the plaster cast on her left arm caught his cheek.

âGosh, I'm sorry, Harry. Did I hurt you? Did you have a good journey? Mam and Bella wanted to pick you up by themselves, but I insisted on coming. They said there wouldn't be room for me and your luggage in the car â I told them that they could jolly well get a taxi to take your trunk to the new house. You don't have to bother about it, Mam's arranging for a porter to take it off the train now. Was the summer ball as gorgeous as it sounds? I can't wait until it's my turn to go to grown-up parties. Are you very sad not to be going back to Oxford? No of course you're not, because you're off to Paris on Saturday. Dad â well, not just Dad, everyone's ever so proud of you for getting a First. Oh look, I've got chocolate on your white suit. I didn't realize it was that soft. Do you want a piece?' She opened her hand to reveal four half-melted squares of Five Boys. âHere, let me get it off.' She pulled a grubby handkerchief from her sleeve with her clean hand, spat on it and dabbed at his lapel, smudging the stain.

âNo, let me,' she interrupted. âBoys haven't a clue when it comes to getting out stains. Guess what -'

âEdyth, stop gabbling like an auctioneer and let Harry get his breath,' sixteen-year-old Bella drawled from behind her.

Both sisters were dressed in fashionable, calf-length, dropped-waist, silk afternoon frocks. To Harry's astonishment Bella looked suddenly and amazingly grown up, in cool, sophisticated cream, with matching accessories and stockings, and amber-coloured cloche hat and gloves. Whereas Edyth â in navy blue, with snagged stockings and shoes covered in dust â could have just left a hockey field.

Instead of giving him her usual bear hug, Bella offered her cheek. Taken aback, Harry kissed her, then, seeing their mother, ran up the platform and once more dropped his bags. Sali had no compunction about embracing him in public. She wrapped her arms around his neck and held him tight for a moment before pushing him back and studying him.

âI'm fine,' he reassured her.

âThere are shadows beneath your eyes. Too many graduation celebrations?' she said shrewdly.

âI've enjoyed one or two,' he conceded. Like the girls, his mother was dressed in silk. The smart beige outfit she'd worn to his graduation ceremony was complemented by a brown hat, gloves and shoes. âAnd talking of celebrations, you three look as though you're going to a party.'

âWell done, Edyth, for letting the cat out of the bag,' Bella said.

âHarry would have found out soon enough.' Sali frowned at the burgeoning red mark on Harry's cheek. âIs that a bruise?'

âIf it is, it's down to Edyth's cast. And what have you done this time, Miss Courts Disaster Wherever She Goes?' Harry picked up his bag and case again.

âFell out of the apple tree in the old house,' Edyth answered cheerfully. âWe were flying kites. Glyn's got caught in the branches. He was crying and no one else would climb up to get it -'

Edyth stuck her tongue out at her sister âThe doctor said it's a clean break and should heal well.'

âAnd a trip to the hospital was just what your father and I needed on the day we moved. Your trunk is being sent on to the new house, Harry.' Sali shepherded the three of them towards the ticket collector, who was sitting in his booth at the top of the flight of steps that led down into the station yard.

âYou brought my car,' Harry quickened his pace when he looked down and saw the open-topped, five-seater Crossley tourer, which the trustees of his estate had presented to him on his twenty-first birthday.

âI thought you'd enjoy driving it to the old house one last time.' Sali handed him the keys.

âBut you've already moved.' A year ago Harry had reluctantly given the trustees of the estate bequeathed to him by his mother's great-aunt permission to sell the mansion that was part of his inheritance. It had been a hard decision to make as they had lived in it for fifteen years, but the spiralling costs of repairs coupled with the size of the place had made it uneconomical to run as a private house.

âThe council took possession of the grounds months ago,' Sali confirmed, âbut they don't take over the house until tomorrow.'

âSo we thought we'd have one last “do” there. Your welcome home from Oxford and bon voyage to Paris, and our farewell-to-Ynysangharad-House party. It's great for dancing because all the furniture's been cleared out,' Edyth chattered as she ran down the steps alongside Harry. âI wish I were going to Paris. Uncle Joey says the girls dance the cancan there. And they eat frogs' legs and snails. Can you imagine that? Are you going to eat frogs' legs and snails when you get there?' Edyth charged up to Harry's car, hurdled over the back door and landed on the bench seat in the back.

âI hope you realize that the whole of Tumble Square saw your knickers then, Edyth.' Bella waited until Harry had opened the passenger door for her mother so he could open the back door for her.

The Grand Reopening of Dandelion Café by Jenny Oliver
The Forever Drug by Lisa Smedman
Cracking the Dating Code by Kelly Hunter
In the Garden of Iden by Kage Baker
Lady Elinor's Wicked Adventures by Lillian Marek
Elliott, Kate - Crown of Stars 1 by beni
The Birth of Vengeance (Vampire Formula #1) by Ross, P.A.
All Souls by Michael Patrick MacDonald
Entwined Enemies by Robin Briar
Death Waits at Sundown by L. Ron Hubbard