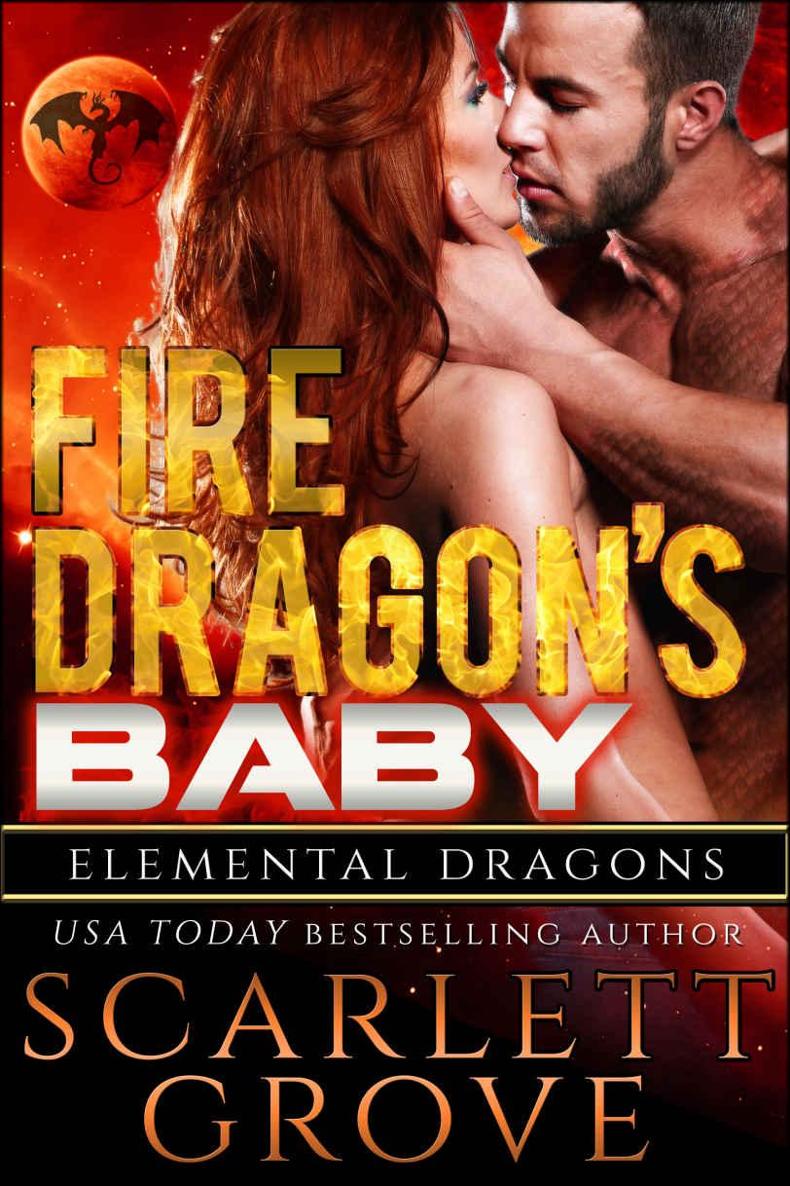 No part of this book may be reproduced in any form or by any electronic or mechanical means, including information storage and retrieval systems, without written permission from the author, except for the use of brief quotations in a book review.

S
alvatt Dorr strode through the broad, stone doorway, his obsidian black cape flowing out behind him. This meeting of the Council of Princes promised to be interesting. He approached the round stone table where the three other princes had already congregated.

The proud, seven-foot-tall dragon shifters regarded each other, knowing that they were all equally matched in strength and cunning. Each dragon prince held an elemental stronghold at the four corners of the planet Galaton, an ancient colony that had once been part of the vast Draconian empire. Now, millions of years later, Galaton was its own principality, divided by four elemental clans.

Salvatt took in his three peers. Elait Plux, prince of the air and intellect, ruled the northern lands of Galaton. His flowing white hair and light blue eyes signified his element. Magmus Murcul, prince of earth and prosperity, ruled over the east. His dark skin and green eyes indicated his affinity to the land. And Shay Vishak, prince of water and passion, ruled over the west. His blue tinted skin and moss green eyes gave away his connection to the waters of Galaton.

Salvatt, being the prince of fire and will, ruled over a land of lava flows. The fire dragons made fire in their bellies and needed to be close to the heat. But it was only the Salvatt, their prince, who could withstand the inferno of the magma for any length of time.

The lava flows cooled into a rocky bed between the volcano and the tropical paradise that made up the rest of the south. Salvatt’s own skin was tinted red and his eyes were black as coal. In his own opinion, he was by far the most handsome of all the princes.

Their lands had long been cultivated to best suit the elemental orientation of each clan. Over the millennia since Galaton was a Draconian colony, the planet itself had conformed to their rule through technology and terraforming.

Since the death of the last Draconian female a year ago, the entire foundation of the planet was at risk. The strongest earls and barons of each land were rising against the princes who had no mates and no heirs. Everything was in chaos. To continue to rule over his land, each prince had been forced to prove his dominance time and time again in fierce battles against his own men. Salvatt himself had battled too many of his own men to count.

Elait was the first to speak, his long white hair shimmering around his shoulders. “The Draconian Mating Council has informed the princes of Galaton that our planet is now eligible to enter the mating lottery. We may now mate with Earth human females.”

“After thirty years,” Salvatt said. “What has changed?”

“They've had their fill of the tiny, human women,” said Magmus, the dark creases around his eyes deepening.

“Who would grow tired of women?” asked Shay, his watery blue skin luminous in the glowing light of the tower.

“No matter the reason, it is critical that we each enter the lottery and secure a mate as soon as possible. The males of my region are ready to revolt. We have spent a hundred years establishing our council; now is not the time to allow our hard work to be destroyed by our men,” said Magmus, his cape of dark brown and forest green fluttered like leaves when he spoke.

“The males of my region are just as agitated,” said Salvatt. “I suggest we be the first to procure wives from among these Earth human females. We must secure heirs and ensure the continuation of each of our lines. We must show our kingdoms that we remain strong.”

Elait nodded. “I agree. Without heirs our thrones are at stake. If one of our dukes or earls produces an heir before any of us, they may find support from the men.”

“It will take a year for the brides to travel through the Draconian system to reach Galaton,” said Magmus. “Then another nine months for human gestation.”

“We cannot wait that long,” Salvatt said. “And we cannot leave our lands to go get them.”

“Have them impregnated before leaving their planet. That way, our females will bring heirs when they arrive,” Salvatt answered.

“It would only take a message craft a few weeks to transport biological samples to the wormhole, rather than the year it would take a Bride Ship,” Magmus mused. “I can see the benefits of your plan, Salvatt.”

“We would all go mad, waiting a year for our mates to arrive,” Shay said. “The mating impulse would tear us apart in that time.”

“If the females begin the mating ritual and bear our young, I believe we can survive the impulse long enough for our brides to arrive,” Salvatt said.

“You have no proof of that,” Shay said.

“The ritual begins when the mate rubs the seed on her skin. This should be enough to soothe the dragon. If we do not enrage the dragon by looking on her or thinking of her until she arrives, then we will be safe from the thrall,” said Magmus.

“If you believe this can work, Magmus, I will agree to the plan,” Shay relented.

“We must inform the Mating Council of our decision,” Elait said, his silver eyes flashing like a lightning strike.

Salvatt flicked his finger across the stone table, bringing up the three-dimensional hologram of the home screen. He flicked through screens until he came to the application that allowed him to communicate with the Draconian Mating Council, who were light years away on Earth. He pressed the button and let it ping.

“Draconian Mating Council, how can I help you?” The voice of the council secretary rang through the hall.

“This is Prince Salvatt Dorr of Galaton with the Council of Princes. We have received the invitation for Galaton to enter the mating lottery,” he began.

“I will gather any available council members, Princes. Please stand by.”

A moment later, the holographic image of a robed Draconian minister hovered above the stone table.

“What is your concern, Princes? Are you not pleased to be included in the lottery?” The minister expressed himself accommodatingly as he addressed them wearing his long, formal robe.

“We are enthusiastic about the prospect of bringing brides to our planet. These last thirty years have been torturous as we've waited for your decision.”

“We bow to the wisdom of the council,” Elait said, cutting in.

“Indeed, we do,” Salvatt continued. “However, we have realized that the time it would take for our brides to arrive would surely kill us all. The mating impulse will not wait for our females to travel. We would all surely go mad and perish before their arrival.”

“Then you should each come to claim them yourselves,” the minister said.

“That is impossible. The entire planet is in a state of unrest. Our last female died last year. Ever since, the citizens of Galaton have been in uproar. Our lords threaten to take our thrones at every turn. We cannot leave our kingdoms to travel to Earth. The females must come to us,” Salvatt said.

“We've arrived at a solution to this problem,” Magmus said.

“What do you propose?” the minister asked.

“Message crafts travel a thousand times faster than transport ships. We can send a craft full of our seed through the wormhole to Earth in a tiny fraction of the time. The human females can then be inseminated on Earth. They can rub our genetic signature into their flesh to begin the mating ritual before departure. It will ease the mating impulse by starting the genetic connection both dragon and bride require. If we do not contact the brides, we can keep our dragons placated. When the brides do arrive on Galaton, they will be heavy with our heirs. This will take care of multiple issues at once.”

“I can see how this might be a solution, Princes. But be aware, the job of the Mating Council is to ensure the health, happiness, and safety of our human brides. We do not tolerate their mistreatment. And impregnation before being launched into space for a year is not something the females of Earth are used to. While Earth humans are comfortable with the mating lottery and their integrated Draconian culture, opening the lottery to distance planets is new to them. We must take the female’s concerns into consideration.”

“Of course,” Salvatt said. “The comfort of our human brides is of utmost importance to the princes of Galaton as well.”

“Prepare your samples,” the minister said. “We will take care of everything else.”

“One more thing, Minister,” Magmus said. “The princes of Galaton have decided the lottery will only be opened to us until we each have an heir. After that, we will allow our dukes and earls and the rest of our lords to enter. After that, the common people.”

“As you know, that would be highly unusual for an egalitarian society such as ours, Prince Magmus..”

“As you know, General, the culture of Galaton predates your newly formed one on Draconia by millions of years. These are our ways.”

“Of course,” the Minister stated. “We do not wish to impose our laws onto an independent planet like Galaton. We wish to continue to count on you as part of the Draconian collective. The concern of the Mating Council is the health and safety of our brides. If we can ensure that, we can allow you to distribute inclusion into the mating lottery at will.”

“I bid you farewell. Good luck with your human brides.”

The minister’s image disappeared from above the stone table. The princes looked at each other, crossing their arms and growling.

“Who among us will be first to produce an heir?” Magmus said, his brown eyes shifting like tectonic plates.

“We enter the lottery at the same time, and hope for the best,” Shay said.

“What if one of us does not find a mate?” Elait asked. “What happens to his kingdom then?”

“It is not up to us to decide,” Salvatt said. “This Council of Princes has protected each of us and the four kingdoms for the last hundred years. But there is nothing any of us can do if one of us does not find a mate. It is up to fate to decide. As it is with all things,” Salvatt said.

Homer’s Daughter by Robert Graves
Immortal Max by Lutricia Clifton
Streaking by Brian Stableford
Landfall by Nevil Shute
Cloud Warrior 05 - Forged in Fire by Holmberg, D. K.
Aunt Bessie Goes (An Isle of Man Cozy Mystery Book 7) by Diana Xarissa
The Cured by Gould, Deirdre
The Gaze of Caprice (The Caprice Trilogy Book 1) by Cole Reid
Countdown Until the End of the World by Sean Kennedy
Touch of Iron (The Living Blade #1) by Timandra Whitecastle