Read For His Eyes Only Online

For His Eyes Only 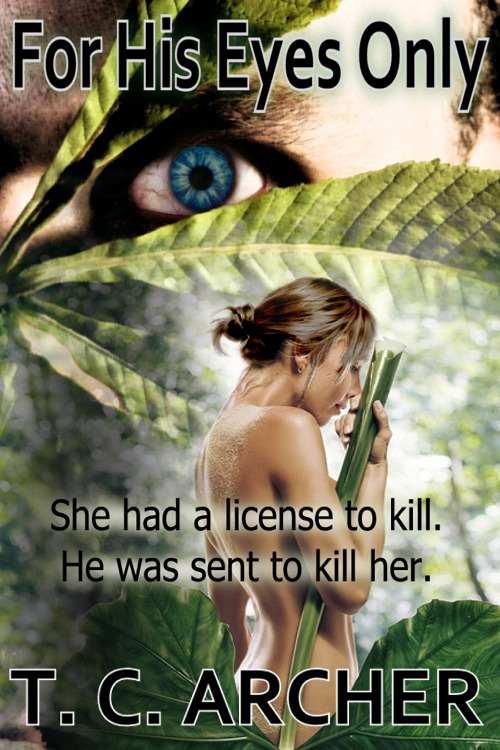 For His Eyes Only

Thanks to Kim Comeau reading and rereading this book.

A gunshot silenced jungle-chatter for a heart stopping instant. The bullet ripped nearby foliage as Jesse vaulted over the decaying trunk of a fallen corozo palm. She landed on the soft, sloping Columbian jungle floor and bolted to the right deeper into the foliage—and away from where her informant Martinez had been gunned down. She choked back anguish. He shouldn’t have run when mercenaries burst upon their meeting place. He had a young wife and child who would now have to go into hiding in order to avoid being tortured and killed by the Columbian drug lords in payment for his having aided an American spy.

She scrambled down the slope into a patch of dense undergrowth, pushed through vines and spider webs, and finally emerged on the bank of a slow moving stream. Sunlight streamed through a wide break in the canopy. Blue sky arched overhead in backdrop to dark green foliage. A satellite signal might be possible through the gap in the trees.

Jesse slowed to a crawl and concentrated past the red howler monkey screeches and parrot caws for footfalls or leaves rustling to indicate Martinez’s killers slinked through the foliage in search of her. Nothing.

She dropped to her knees, yanked open a pocket of her camouflage fatigues, and pulled out the secure satellite phone. She flipped it open, punched out home base’s ten-digit number, then pressed the receiver to her ear and held her breath until the first elongated ring began. By the third ring, her heart pounded so hard, the thud echoed in her ears.

“
Come on. Pick up.” She tried to ignore the dribble of sweat trickling down the valley between her breasts as the fourth ring began.

What was wrong? HQ verified the source of incoming calls on the first ring and picked up on the second. She jerked the phone from her ear and squinted at the display. Five black bars along the left indicated a strong signal. She pressed the phone against her ear and shoved aside a lock of hair which had worked free of the brain numbingly tight ponytail. Why weren’t they—

“
Control, this is Blue Delta Four.”

“
Confirmed, Delta Four. What is your status?”

“
I am not at target. Must speak with Blue Leader.”

“
Blue Leader is out of communication range.”

A click sounded on the line, a quick ring, then a male voice answered, “Delta Four, this is Green Leader. What’s happened?”

Jesse froze. Green Leader? Why had Robert Lanton intercepted her call? “Where is Blue Leader?” she demanded.

“
Out of communication range. What’s happened?”

She silently cursed, but gave in. “We have a leak. The Columbians knew about the meeting.”

Her heart thumped harder with memory of Martinez lunging for the trees when the mercenaries rushed them. “M-2,” she replied with effort.

“
How did M-2 obtain his information?”

She wondered the same thing. “I don’t know. Before he could confirm his source, the Columbians shot him. But he was scared, really scared. The leak has to be high up.” Anger, hot and hard, shot through her. Martinez’s life had been forfeit—and for nothing. “If that little girl dies because someone at HQ leaked the mission, I’ll kill—”

What? She’d never been asked to verify her identity a second time. The control operator had already verified her code. “Zebra, four, eight, two, seven, golf,” Jesse counted off.

An almost imperceptible pause followed, then, “That code is outdated, Delta Four. Give me your current verification.”

Outdated? Her mind whirled. “What the hell is this?”

“
Get Blue Leader on the line right now, and put me through voice recognition,” Jesse ordered.

“
Negative,” he replied. “Not without current verification.”

“
Get the director on the line—now! Don’t send in Green Team until you’ve verified with him. The Columbians were waiting for us—they murdered M-2. They knew about our meeting. That confirms what he told me.
The Columbians have intel on Operation Hangman.
Our men will be slaughtered.”

Jesse yanked the phone from her ear and looked at the screen. Five bars of signal strength held strong. She punched the direct emergency number to Blue Leader. A fast busy signal resonated through the connection. She pressed the phone’s display button. The display blinked
unavailable
. The network—satellites, ground stations, handsets—had never, ever been unavailable. It was designed and built by the best to be always available. HQ had scrambled the access code.

Her heart went stone cold. Green Team was headed straight into the arms of the Columbian mercenaries.

Only two hours ago, she gave the go ahead to move in and rescue Maria Hamilton, Senator Hamilton’s daughter. Jesse hadn’t spotted any guerrillas hidden among the villagers, but she now knew they were there, just as they’d been there when she met with Martinez.

A slight breeze wafted past, cooling the sweat soaked shirt that clung to her back and sending a chill down her spine. She was Blue Team—recon—working solo. She should have smelled the trap. Yet she’d sent her team in to be murdered—unless…

Jesse drew a deep breath to slow her heart rate while visualizing the map of coastal Columbia. The village sat three kilometers to the south over a small but treacherous pass jungle pass. Forty people lived in the village, farmers—or so she’d thought. How many were mercenaries employed by Amadeo Perez, the most powerful drug lord in Columbia, and the man responsible for kidnapping Senator Hamilton's daughter?

Probably every last one of them
.

Muscles burned with the final effort to reach the summit overlooking the village. Branches whipped and tore at her face as she flew through the foliage and burst into the open above the village. She fell to her knees, fumbled the compact binoculars from a thigh pocket, and forced her shaky hands steady enough to scan the village as she dropped to her belly. Armed mercenaries danced in drunken celebration in the village center. Relief tightened her chest at sight of two men wearing U.S. fatigues, hands tied behind their backs and kneeling within the circle of mercenaries.

But Green Team was comprised of six men. Where were the other four? Her heart surged. They had to be hidden in the jungle, preparing to rescue their teammates. If she could find them—several mercenaries near the two men swung their rifles heavenward and fired bursts.

She scanned the village perimeter. No eyes, glint of metal, or shadow out of place. Dammit, until Green Team wanted to be seen she wouldn’t detect so much as a leaf flutter. She swung the binoculars back to the village center and counted forty-two armed men crowding the small square. Between herself and the four remaining Green Team members, they could—one of the men who had fired his rifle into the air swung the weapon downward. Jesse realized his intent and pushed to her knees as she yanked the 9mm Beretta from her thigh holster. The rifle barrel halted an inch from the nearest Green Team member’s temple. He lunged for the mercenary. The second Green Team member shoved to his feet.

Jesse fired in unison with the boom of the mercenary’s rifle. Blood gushed from the hole blown in the first Green Team member’s head. Jesse’s stomach lurched as he dropped to the ground. She fired again. Pandemonium broke out. The second Green Team member staggered back under the onslaught of AK47 bullets. Jesse aimed the Beretta on the man shooting at him and fired three shots. Then she froze.

A gap had opened between the mercenaries at the north end of the village. On the ground behind them, four ops-clad bodies lay piled atop one another. The hand holding the binoculars shook so badly the bodies looked as if they bounced in the throes of an earthquake. She couldn’t tear her eyes from the blood stained fatigues. Green Team dead? It wasn’t possible.

Tears streamed down Jesse’s face. She yanked open a vest pocket and pulled out the sat-phone. Blood roared in her ears. She redialed Blue Leader Headquarters at Langley. This time, there was no tone, no click of a connection. Nothing but static. She pushed the display button on the sat phone.
Unavailable
blinked as it had earlier. The code had been scrambled. She'd been locked out…and the mercenaries had murdered Green Team.

Someone inside the Office of Internal Affairs had sold out the U.S.

The same person who had locked her out.

Traffic oozed along New York’s Second Avenue like butter melting in a midsummer heat wave. In the backseat of a cab idling at a red light, Jesse scanned the street. Three blocks ahead loomed the Bank of America branch that housed a safe deposit box belonging to her alias, Joanne Anderson. The light changed and the cabbie merged into the right lane, then stopped at the sidewalk.

Jesse pulled a twenty from the open zipper of her small purse and handed it to him. “Keep the change.” She wanted to walk the last few blocks and get a look around.

She stepped from the car and breathed deep of the heavy city air. The next half hour was as crucial as had been the last three weeks dodging U.S. and foreign agents. Jesse headed south, noting every car, every person, on the avenue. If anyone followed, they were good—very good—but she expected nothing less.

Despite the inconceivability that Green Leader Robert Lanton could locate her safe deposit box, Columbia had taught her that earlier suspicions about the man hadn’t come close to revealing the depths of evil to which he was capable. Memory flashed of blood spurting from the Green Team member’s head when the mercenary shot him. Her step faltered. A passing man looked in her direction. She caught the concern in his eyes—felt the burn of tears—and hurried past without a word.

She had to get a grip on the memories. She couldn’t afford to draw attention to herself. Her jaw tensed at recollection of The Professor’s forwarded email: The Office of Internal Affairs reporting Green Team’s massacre.
No survivors. Mission compromised by Blue Team operative Jessica Evans.
Tom Montague, AKA The Professor, had included a copy of the transcript of her call warning Headquarters to pull Green Team out. But instead of a warning, the call had been altered to sound as if she had threatened Green Leader. And she had, but because of his inaction. Damn her temper. Lanton, the fucking puissant, had made it sound like she had killed Martinez and threatened him for trying to stop the massacre.

Priceless by Richie, Nicole
Wool by Hugh Howey
Farmed Out by Christy Goerzen
Mind Guest by Green, Sharon
The Tycoon's Toddler Surprise by Elizabeth Lennox
Beyond The Music (The Rock Gods Book 7) by Ann Lister
Ironman by Chris Crutcher
Our Town by Kevin Jack McEnroe
The Wickedest Lord Alive by Christina Brooke
The Biomass Revolution (The Tisaian Chronicles) by Smith, Nicholas