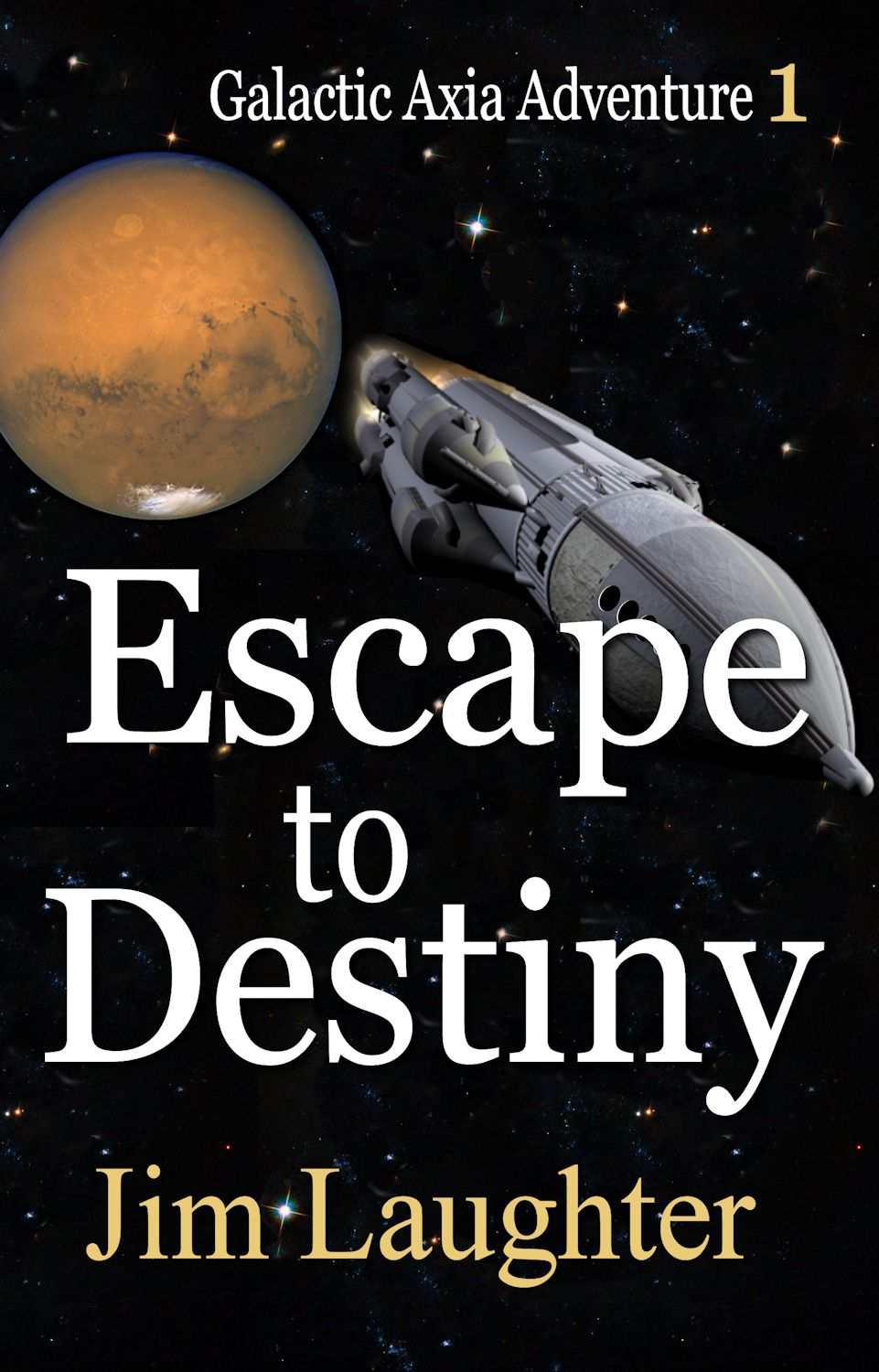 An imprint of AWOC.COM Publishing

No part of this publication may be reproduced, stored in a retrieval system, or transmitted in any form or by any means, electronic, mechanical, recording or otherwise, without written permission, except in the case of brief quotations embodied in critical articles and reviews. All characters and concepts of Galactic Axia are the property of the author and may not be used in any other work by any other author without written permission by AWOC.COM Publishing and Jim Laughter.

We are not alone in the universe. But you already knew that. It is the way in which we are not alone that is the question, isn't it? Of the billions of stars in the Milky Way galaxy capable of nurturing life-sustaining planets, our sun out on a lonely spiral arm is not unique. Although a beautiful gem in space, our little planet Earth does not stand alone as nature’s supreme creation.

Many billions of Earth-like planets orbit suns where life similar to humanity can exist. It stands to reason that of these billions of planets orbiting yellow suns, there are many civilizations in all stages of evolution ranging from early primate cavemen to deep space travelers. Many civilizations are younger than us and not as technologically advanced. But there are no doubt others that have existed for hundreds of thousands of years, perhaps millions, whose technology far surpass Earth in every way and who travel among the stars in interstellar ships. Some of them have visited Earth and influenced our cultures, intermingling with early humans and creating a new species – modern man. The ancient deities of Rome and Greece may very well have been visitors from other planets, each one influencing our religions when believed to be gods. Others may have been mistaken for evil spirits sent from Hades to torment and torture mankind, giving rise to the modern day myth of angels and devils. Like the universe, the possibilities are endless.

If you are expecting this book and others in the Galactic Axia series to be about silicone-based aliens that look like green Jell-O, or little gray creatures that abduct people in the night, you will be sorely disappointed. But on the other hand, if your mind is open to the unexpected possibility that whoever is out there is the more normal of the universe, and that we, in fact, are the odd ones, then hang on tight.

Welcome to Galactic Axia, a benevolent commonwealth of planets spread across the galaxy and ruled by an absolute monarch on the capital planet Shalimar. And just like here on Earth, they have their military service, a branch of heroes dedicated to the preservation of peace. They stand ready to defend the Axia and the independent planets with their lives, and many times they pay the ultimate price for the safety of their citizens. You’ll meet a large number of them in this and other books in the Galactic Axia young adult adventure series. You’ll get to know them on a personal basis. You’ll learn to love some and hate others. Many will not survive.

The Axia only has one mortal enemy; a violent reptilian species called Red-tails. Conjecture has it that a Red-tail vessel crashed on Earth many millennia ago, giving rise to Earth’s mythical vision of red devils. Red-tails are heavy set with thick leathery red skin. They have vestigial horns protruding from their foreheads, and they have heavy barbed tails for balance. Red-tails invade from their home galaxy of Hadeous by means of intergalactic transit tubes that can transport hundreds of raiding ships at a time. They are always hungry and their planet is always starving. Their main quarry are humans.

The humans of Galactic Axia (yes, they are our parent stock here on Earth) are not very different from ourselves. They have the same needs and wants as we do. They live their lives as we do, some in conflict and struggle and others in mundane routine. They raise their families, go to work and school, and have both triumphs and disappointments.

Earth isn't the center of anything in Galactic Axia. In fact, our planet is closed; quarantined. Seeded with threatened species of plants and animals from other similar worlds for hundreds of thousands of years, it was later used as a safe place to exile criminals and malcontents. Watcher ships in deep orbit along with observers on the surface, stand vigil over Earth (or Sol-3 as they call it) hoping for the day when we’ll mature enough to be adopted into Galactic Axia society.

The day will come when we’ll grow up enough to where we’re not a threat to civilization here or out there. We’ll abandon our nation-against-nation and religion-against-religion bickering and strife and learn to live together on this small orb in space. We’ll put away our weapons and stop spilling each other’s blood for ideals that mean nothing in the grander cosmic scheme of the universe.

In the meantime, we are being prepared. This book and its companions are but one way that is being done. So journey on, dear reader. It is not by happenstance this book came into your possession.

The air was crisp—a beautiful spring day. Along with the other kids in his class, ten-year-old Delmar Eagleman was enjoying a field trip to a local museum. That it was to the new wing dedicated to the military branch of Galactic Axia and its far-flung personnel was of special interest to the boy.

Ever since that day when two service troopers arrived at the Eagleman farm wearing their formal dress uniforms, his mother had become withdrawn; a haunted look in her eye. He knew she wasn’t telling him something—something about his father, a trooper himself. Now maybe Delmar could find out something at the museum. He was barely able to contain his excitement.

His older brother, Dorn, almost a man himself, glared at Delmar sullenly and mumbled something about him being a stupid kid. He had been roped into replacing their mother as chaperone for this bunch of brats when she was called to Keeler Field for something to do with their father’s disappearance. She would pick them up at the school after the field trip.
I could be out with my friends instead of babysitting these brats,
Dorn thought
.
He was mad and he didn’t care who knew it.

Since the school was reasonably close to the museum, the teacher and chaperones decided to have the kids walk to the museum rather than use a bus. The weather was good and it would help burn off some of the excess energy from the gaggle of ten year olds.

The new museum display was everything Delmar hoped it would be, however, in recollection it seemed to fly by in a flash. As was usual, when the memory scrolled, the day’s event seemed unimportant. It was what happened later that mattered.

Although it had been five years, the boy saw himself as a ten year old walking in single file back to the school, his older brother directly behind him, prodding him on with an occasional push or poke. Delmar knew what was going to happen next but found himself powerless to stop the awful memory.

The afternoon was warm and traffic grew heavy. Mindful of the adults, the students kept to the sidewalks. Everything was going well. Even Dorn’s persistent scornful remarks could not dampen Delmar’s spirits.

Approaching one of the major intersections, the lead element of the class stopped and waited for the light to change and for the crosswalk to clear. The traffic signal changed and cross traffic started up again when suddenly, before the students could move, the blare of a truck air horn split the air. As if in slow motion, Delmar recalled the monstrous runaway truck looming large in the intersection where it smashed into several cars just starting to move toward the students.

Metal and glass flew everywhere as the truck careened onward, barely slowing even though it had a small car crushed under its front bumper. Everything ground to a halt and the air froze for what seemed like an eternity. Then Delmar heard someone scream. It was him. He was screaming; his eyes glued on the crushed car. It was his mother’s car. She was still inside it. She wasn’t moving. Still screaming, someone picked him up and carried him away from the terrible accident.

The youth shuddered again, reliving the horror as if it happened only yesterday. Delmar could not forget what followed next although he desperately wanted to—the hospital, the funeral, the court, and most of all, his brother.

Shaking young Delmar while angry tears streamed down his face, Dorn screamed at him that both his mother and father were dead and it was all his fault. It had something to do with him being too wimpy to walk home from school and her having to pick him up.

But Delmar was sure that wasn’t true. “Dorn wanted the ride, not me,” he muttered to himself.

And that was the beginning of Delmar’s daily nightmare. Appointed legal guardian, Dorn never let a day go by without releasing his anger and resentment on his younger sibling. The brothers took two different routes dealing with their grief. Dorn crawled inside a bottle. Delmar crawled inside himself.

He must have fallen asleep because the next thing he knew Dorn was dragging him out of bed. “Get out of bed and fix me some breakfast!” he screamed as he drew back to cuff his younger brother.

Delmar wisely ducked and scrambled out of Dorn’s grasp. Running down the dirty hall to the kitchen, he pulled out pans while his brother laughed behind him. But he knew he was safe for the moment when he heard Dorn turn and stumble into the bathroom.
Probably throwing up again!

Listening while he prepared meat and potatoes, Delmar was rewarded by hearing Dorn pay the drunkard’s price for his previous night of drinking.
That should keep him busy for a few minutes
. He pushed back his ragged hair and concentrated on making something edible. Quality wasn’t a big concern at this stage of their relationship. All he wanted was a temporary reprieve from Dorn’s ever-present anger.

About the time his brother arrived, Delmar was shoveling the food onto a plate. Setting it in front of Dorn, Delmar served himself and started to take his plate to the far end of the table. But before he could dodge, Dorn lashed out and knocked it out of his hand.

“That’s what you get for being late!” Dorn growled. “Now clean up this pig sty and do your chores! I got to go find you another job!”

Delmar swept up the food and broken crockery and then in silent hunger, headed to his room to dress. Fortunately, he had a stash of food hidden out in the barn where Dorn would never find it. Such subterfuge had become necessary in the months since Dorn had pulled him out of school. Prior to that, Delmar could count on at least one hot meal in the cafeteria. But no more. Now he had to fend for himself or starve.