Ghost of the Chattering Bones (5 page)

Violet, who knew the verse by heart, was repeating the lines to herself when she suddenly heard something. What on earth was that noise? What could be—wait! She recognized that sound!

Violet slipped quickly out of bed. She gave her sister a shake. “Jessie,” she whispered. “Jessie, wake up. Benny was right!”

Jessie sat up in bed. “What …?” Her voice was thick with sleep.

“I can hear water rushing over rocks!” Violet cried, rubbing her arms to take away the chill. “Listen.”

Jessie sat very still for a moment. Then she said, “Your ears must be sharper than mine, Violet. I can’t hear any—oh!”

Violet looked at her sister. “You can hear it, too, can’t you?”

Jessie nodded her head slowly. For a moment, she was too astonished to speak. But she quickly pulled herself together. She was out of bed in a flash. She went over to the window and looked out. All she could see was inky darkness.

“Do you think it’s true, Jessie?” asked Violet, who had just come up behind her. “Do you think that’s the ghost of the Chattering Bones?”

“I don’t know what to think,” Jessie admitted in a hushed voice. “But one thing’s for sure,” she added. “Something very definitely odd is going on!”

Violet looked at Jessie. Jessie nodded back. They were remembering their promise to Benny. It was time to do some investigating.

As they stepped out into the hall, another door opened. It was Henry and Benny.

“You were right, Benny,” said Violet. “We just heard it.”

“It’s the ghost of the Chattering Bones,” Benny stated. “Henry heard it, too.”

“I heard something,” Henry corrected as he led the way downstairs. “But that doesn’t mean there’s a ghost out there.”

When they got to the kitchen, Henry reached for a long flashlight that was hanging on a hook by the back door. Then he turned to his little brother.

With a nod, Henry opened the door and they filed outside. Closing the door behind them, they tiptoed down the creaky porch steps. Then, with the beam of the flashlight sweeping across the grass, they made their way closer to the bridge—and to the sound of rushing water. Then Benny suddenly stopped. He had seen something the others hadn’t.

“There’s somebody up there,” he whispered.

Sure enough, a shadowy figure was moving across the bridge.

Henry beamed his flashlight upward. “Who’s there?” he yelled.

As the Aldens gave chase, Benny suddenly tripped and went sprawling. The others waited while he scrambled to his feet. But when they raced off again, it was too late.

Whoever had been on that bridge had escaped.

“I don’t understand it,” said Henry as they had a late-night meeting in the room that Violet and Jessie shared, “Someone’s going to a lot of trouble to make us think the bridge is haunted.”

Violet frowned. “Who would do such a thing?”

“And how?” Benny demanded.

“Beats me,” said Jessie, who was sitting on the bed next to Benny. “But it sure sounds like water’s flowing under that bridge.”

“Do you think anybody else heard it?” Benny wondered.

“Not likely,” said Henry. “Norah and Mrs. McGregor have rooms facing the front of the house. So does Annette.”

“What about Pam?” said Benny. “Her room faces the back.”

“Or maybe she has heard it,” suggested Violet. “She does seem to think the bridge is haunted.”

The others turned to him, puzzled.

“Maybe Pam’s behind the whole thing.”

“Oh, Henry!” cried Violet. “You don’t really mean that, do you? You can’t suspect Norah’s niece.”

“We have to consider everybody,” said Henry.

“But why would she want to play a trick on us, Henry?” Violet couldn’t believe Pam would do such a thing.

“You know, I’ve been thinking about Pam,” said Jessie. “She said she never hiked as far as the woods. I wonder why she lied to us,”

“That was weird,” admitted Violet.

“What I can’t figure out,” said Henry, “is why Pam would lie about something like that.”

“Maybe it’s her idea of a joke,” offered Jessie.

“You know,” said Violet, “There’s somebody else we might want to include on our list of suspects.”

Violet nodded. “Maybe he figures it’s the only way to get Norah to sell her bridge.”

“You mean, by convincing her it really is haunted?” asked Benny.

Violet nodded again. “He said he’d do whatever it takes.”

Jessie looked thoughtful. “It’s funny that he was sitting with Darlene last night. I didn’t think he knew anyone in town. He said he was just passing through.”

“You think Spence and Darlene are partners in crime?” asked Jessie.

The others had to admit it was possible. After all, it was Darlene who first told them about the bridge being haunted.

“I thought of someone,” Benny said. “Annette.”

“She’s trying to scare us away,” said Benny. “And you know why? Because she wants to find the secret hiding place herself!”

That made sense to Henry. “You might be right, Benny,” he said. “Annette’s whole attitude changed as soon as Norah mentioned we’d be working on the mystery.”

“And that would explain why she insists the brooch was stolen,” Jessie realized. “She doesn’t want anyone else looking for it.”

Violet raised her eyebrows. “You think Annette wants to steal the brooch?”

“Could be,” Henry answered. “Don’t forget, the brooch is made from valuable jewels. Maybe she needs money for school.”

“No, but it does make her a suspect,” Henry insisted.

“I don’t think we should jump to any conclusions,” said Violet, “until we have more evidence.”

Jessie nodded. “We’ll keep our suspicions to ourselves for now. Let’s try to figure a few things out on our own first.”

On one thing they were in complete agreement—there were a lot of strange things going on at Eton Place.

After breakfast the next morning, Norah and Mrs. McGregor set off for town to do a bit of shopping. After waving goodbye, Henry, Jessie, Violet, and Benny went into the backyard to do some investigating. Maybe the person who had been on the bridge last night had left a clue.

“Let’s spread out,” Jessie suggested. “That way we can cover more ground.”

“Good idea,” said Henry. “If anybody sees anything, shout.”

After making a careful search of the bridge, Henry walked over to where Violet was combing the bushes. “Any luck?” he asked.

“Not so far,” Violet admitted.

“We checked out the flowerbeds under the bridge,” Jessie said when she and Benny joined them, “but—”

“We struck out,” finished Benny.

“Hi there, kids!” It was Spence Morton. He was coming around the side of the house. “Is Norah around?” He flashed them a smile.

Henry said only, “I’m afraid not.”

Benny folded his arms. “And for your information, the bridge isn’t for sale.”

Spence held up a hand. “Whoa, I didn’t come to pester Norah. I’m here to apologize.”

“I put a lot of pressure on Norah to sell me her bridge,” Spence explained. “I shouldn’t have done that.”

“And you tried to scare everybody!” Benny said accusingly.

Benny said, “You made it look like the bridge really was haunted.”

“No, I didn’t do that!” Spence looked startled. “I know I made a nuisance of myself, but I’d never pull a stunt like that.” He looked at each of the Aldens in turn. “I have children of my own,” he added. “I’d never try to scare kids like that.”

The Aldens looked at each other. They had a feeling Spence Morton was telling the truth.

Spence continued, “Last night, I had a chat with the lady from the gas station. She told me that Norah’s great-great-grandfather, Jon Eton, proposed to his wife on that bridge. She said he had it shipped all the way to America as a special gift for his homesick bride.”

“The article in the paper never mentioned anything about it,” Spence went on. “I understand now why Norah refused to bargain. How can you put a price tag on family history?” He paused to gaze admiringly at the bridge. “Please say goodbye to Norah for me. It’s time I was heading home.” With a cheery wave, he walked away.

“Well, I guess that rules Spence Morton out as a suspect,” Jessie said, climbing the porch steps.

“It rules Darlene out, too,” added Henry as they trooped into the kitchen.

Benny sniffed the air. “Something sure smells good in here!”

Pam was taking a tray of cookies out of the oven. She smiled over at the youngest Alden. “Ready to do some decorating?” she asked him. “See what I’ve got? Butternut frosting and sprinkles!”

Benny didn’t need to be asked twice. After washing his hands, he set to work while Pam started on another batch of cookies.

The other Aldens sat around the table and tried to make sense of Meg’s verse.

Eton’s Loop will show you

a clue from the past.

Once … twice … three times she read the verse. But it was no use. They still didn’t have the faintest idea what it meant.

Violet glanced over to where Pam was adding a drop of vanilla to the cookie batter. “Do you bake at home, too, Pam?” she asked. “For your parents, I mean.”

Pam looked at Violet in a strange way. “Why do you mention my parents?” she said in a cold voice.

Jessie and Henry exchanged a glance. What’s that all about? the look seemed to say. No one was sure what to say next. Then Pam dashed out of the room.

“That was odd,” Jessie said, keeping her voice low.

Henry agreed. “Pam sure doesn’t like talking about her parents.”

“It does seem that way,” admitted Violet.

As everyone gathered round to admire all the cookies, Benny said, “See the star-shaped one I decorated for Pam? Her name’s on it.”

Jessie tried to hide a smile when she saw where he was pointing. “You got the letters mixed up, Benny. You spelled MAP, not PAM.” 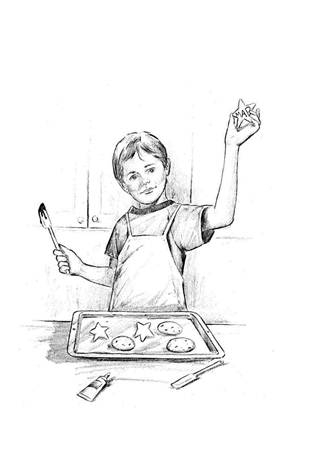 The youngest Alden smacked his forehead with the palm of his hand. “Oops!”

“The letter M goes last, Benny,” explained Violet. “And the letter P goes first.” Benny scraped off the sprinkles and tried again. This time, he spelled Pam’s name just right. Everyone cheered—everyone except Jessie, who wasn’t paying attention. She had the weirdest feeling she was close to figuring out the puzzle, but she couldn’t quite get hold of it. And then—in a flash—everything made sense.

“Don’t keep us in the dark,” pleaded Violet “What are you thinking?”

Jessie pointed to Pam’s name spelled out in sprinkles. “See that?”

“Sure,” Benny told her. “We’ve read it about a hundred times.”

Jessie went over to the table where she’d left her notebook. Pulling up a chair, she printed the words ETON’S LOOP on a blank page. With her pencil poised over her notebook, she recited, “When last goes first, and first goes last.”

The others stared at her. They looked totally confused.

“I don’t get it,” Violet said as they sat down.

“That makes two of us,” Benny said.

Henry added, “Three of us.”

“I’ll do the same thing Benny did,” Jessie told them. “I’ll switch the letters around.”

She paused to look at everyone, hoping they’d see what she was driving at. “I’ll make the first letter in each word go last, and, the last letter go first.” Jessie held up her notebook for the others to see—ETON’S LOOP had become STONE POOL!

“Oh, my goodness!” Violet said, putting her hands to her mouth.

“I helped, too,” put in Benny, who was busy scraping the last of the frosting from the bowl. 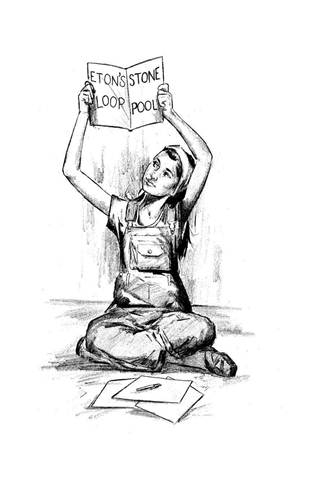 The Carlton Club by Stone, Katherine
The Cost of All Things by Maggie Lehrman
8 Antiques Con by Barbara Allan
The Exile by Mark Oldfield
Katrakis's Last Mistress by Caitlin Crews
My Brave Highlander by Vonda Sinclair
Goddess by Morris, Kelee
Unexpected Chances by A. M. Willard
No Other Story by Dr. Cuthbert Soup
The Protector by Madeline Hunter