Read Golem in My Glovebox Online

Golem in My Glovebox 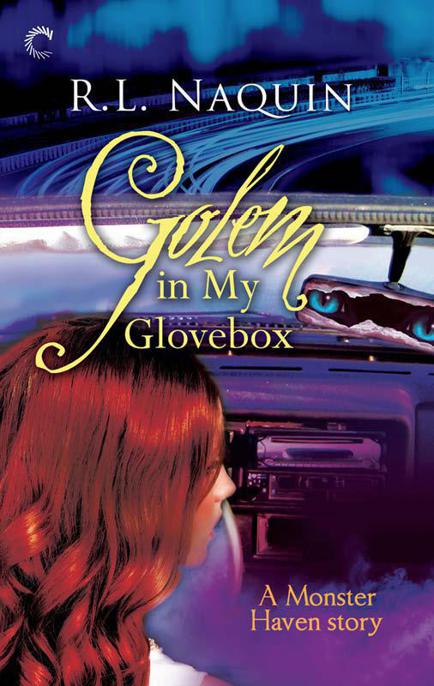 Golem in My Glovebox
By R.L. Naquin

In her role as Aegis, Zoey Donovan has rescued and cared for hundreds of monsters and mythical creatures. Now humans are the ones in need of her help. Someone with a personal vendetta against the Board of Hidden Affairs has kidnapped all the other Aegises in the country—including Zoey’s mother.

With the Hidden government in shambles and a string of deadly clues to follow, Zoey and her reaper boyfriend set out on a cross-country chase to stop the kidnapper from killing the captured Aegises. Along the way, they pick up a miniature golem who’s on a quest to find his humanity...and may be the key to solving the grisly clues.

If Zoey succeeds in defeating this new evil, she’ll finally be reunited with the mother she lost over twenty years ago. But if she fails, she’ll become the final victim.

Don’t Miss
Monster in My Closet, Pooka in My Pantry,
and
Fairies in My Fireplace,
available now!

I’m jumping right into it this month because
New York Times
bestselling author Shannon Stacey’s next book in the Kowalski series is out in both digital and print at the end of April.
Taken with You
is the story of girlie-girl librarian, Hailey. She’s easy to get along with, is a small-town girl who loves where she lives, but she also loves nice clothes and fine dining and is looking for a guy who will be there when she comes home at night, and who will dress up and take her out to something a little more upscale than the local diner. It’s also the story of Matt, a hunky forest ranger who loves the outdoors, loves his dog, and is looking for a woman who doesn’t mind his erratic hours, will take a muddy ride on an ATV and won’t kick him out of the house when he walks in covered in dirt. Needless to say, these two opposites attract when Matt moves in next door to Hailey, and their story will take you on a wonderful romantic rollercoaster that will leave you with that happy-book sigh at the end.

If you love the TV show
Scandal
, have I got a new series for you. In Emma Barry’s Washington, D.C.-set, politically charged
Special Interests
, a shy labor organizer and an arrogant congressional aide clash over the federal budget but find love the more difficult negotiation.

April also brings a week of sports-related romance releases at Carina Press and we have six fantastic, very different contemporary sports romances being added to our already fantastic sports romance lineup. Allison Parr’s
Imaginary Lines
continues her new adult series. Tamar fell hopelessly in love with Abraham Krasner at age twelve, but knew he’d never see her as more than the girl next door—until years later, she gets a sports journalist position covering the NFL team Abe plays for...

Author Michele Mannon follows up
Knock Out
with
Tap Out
. Underwear model and playboy extraordinaire Caden Kelly will let nothing stop his come-back as an MMA fighter, especially a red-headed busy-bodied reporter hell bent on ruining his shot at a title. Meanwhile, Kat Latham writes the London Legends series about the world’s hottest rugby team. Book two,
Playing It Close
, features the team captain and a scandalous woman with whom he spent one passionate night and never thought he’d see again—until she turns out to be his team’s newest sponsor.

Kate Willoughby brings the on-the-ice action when a hunky hockey player falls helmet over skates for a nurse, but has to convince her he’s not the typical different-puck-bunny-every-day athlete in
On the Surface
. In a much warmer-weather sport, professional tennis player Regan Hunter’s temper is as notorious as her unstoppable serve, but love and ambition will go head-to-head when she meets former player-turned-coach Ben Percy. Check out
Love in Straight Sets
by Rebecca Crowley.

And because we can’t leave out America’s favorite sport, Rhonda Shaw’s
The Ace
brings us a sexy baseball romance in a follow-up to her debut,
The Changeup
. “Love ’em and leave ’em” is real estate agent Karen Bently’s motto—that is until her longtime crush, ace pitcher Jerry Smutton, sets her in his sights and offers her a proposal she can’t resist.

But it’s not all contemporary romance all the time in April. We have an eclectic selection of books from a lineup of talented authors (as always, right?). R.L. Naquin is back with her popular Monster Haven series. If you haven’t checked out this fun, sometimes zany, but always adorable series, look for book one,
Monster in My Closet
, at all of our retail digital partners. This month’s installment,
Golem in My Glovebox
, finds crazy shenanigans mixed with a gruesome, cross-country trail of clues, as Zoey and Riley attempt to save the rest of the country’s Aegises—and ultimately, Zoey’s lost mother.

PJ Schnyder is wrapping up her London Undead trilogy with
Survive to Dawn
, in which werewolf and pack medic, Danny, must choose between his Alpha’s orders and the human witch who might have the cure to the zombie plague. And in the second installment of the Once Upon a Red World science fiction romance saga from Jael Wye, the tale of Jack and the Beanstalk unfolds on a devastated Earth 300 years in the future in
Ladder to the Red Star
.

A.J. Larrieu debuts with her first full-length paranormal romance novel,
Twisted Miracles
. A reluctant telekinetic is drawn back to New Orleans’ supernatural underworld when her friend goes missing, but once she’s there, she finds her powers—and her attraction to the sexy ex-boyfriend who trained her—are stronger than ever. Talented fantasy author Angela Highland is back with Rebels of Adalonia book two in her epic fantasy
Vengeance of the Hunter
. As rebellion ignites across Adalonia, the healer Faanshi must save both the Hawk Kestar Vaarsen and the assassin Julian—the one from magical annihilation at the hands of his Church, and the other from a path of revenge.

For mystery fans, we welcome author Delynn Royer to Carina Press with her book,
It Had to Be You
. An ambitious tabloid reporter stumbles upon the story of her career when she joins up with a jaded homicide detective to solve the Central Park murder of a notorious bootlegger in 1920s Manhattan.

Rounding out the April lineup is a book for all Regency historical romance fans. Wendy Soliman’s Forsters series wraps up with
Romancing the Runaway
. When Miranda and Gabe discover her childhood home has been stripped of all its valuables, Gabe uncovers more to the old house than either of them had imagined. And with Gabe’s safety hanging in the balance, Miranda is prepared to make the ultimate sacrifice...

I’m confident you’ll find something to love among these books and I hope we provide you with many hours of reading enjoyment and escape from the neverending dishes!

Here’s wishing you a wonderful month of books you love, remember and recommend.

For you. You know who you are. (Insert absurd wink and knowing look here. And maybe a pirouette, because sometimes I like to be fancy.)

High fives, mushy hugs, and slobbery kisses go out to so many people who helped with this book—and the whole series, thus far.

The Lawrence Writers have my continued, undying thanks for all the feedback, coffee, whip snapping, shoulders to cry on, entertaining drunk tweets, and nights out when I didn’t think I wanted to see another human being. You guys are the best—and I expect great things out of all of you.

Thanks and snorts to Kate and Murffy who continued to pull me through with advice, local research, and hilarious conversations about bodily functions. Also, pictures of places I was writing about but couldn’t see. And speaking of pictures, a big thank you to Paul for sharing photos of San Francisco. Any mistakes I made aren’t for lack of my friends trying.

This book had an editor switch from the previous three in the series. Thank you a million times to Alison for guiding Zoey and I this far down the road. I am truly blessed for having had you as an editor, but doubly so for getting to keep you as a friend. You deserve all good things, and I’m so happy for you. And thank you to Mallory for asking to inherit me and for willingly diving into the middle of the series as my new editor. Your faith and enthusiasm for my books are more appreciated than you’ll ever know.

Always, my family has my gratitude for putting up with a cranky, unkempt writer. Without you guys, there wouldn’t be any point to anything.

And finally, thank you to my readers who’ve been so amazing. Several of you have brought me to tears with your touching comments and emails. I wish I could hug you all.

Stay with me a little while longer, folks. We’re only halfway there.

In spite of its light and airy appearance, my ceremonial dress made of flower petals and spider silk itched like an STD through horsehair underwear. And scratching made a mess of the delicate design.

Maurice, my closet monster roommate, slapped my hand away. “Dammit, Zoey,” he said, his yellow eyes pleading. He dropped his voice to a whisper. “You’re already flashing side-boob. This is a solemn ceremony. I don’t want to have to glue a leaf on you to hide a nipple slip. Quit fussing.”

I found a spot on my hip where I’d already sprung a hole and rubbed my fingers over it. The motion wasn’t as satisfying as I’d hoped.

I stood in a clearing in the woods behind my house, surrounded by a menagerie of odd creatures. A low-hanging branch held the tiny, month-old star of the ceremony, along with the rest of the party involved. Plus me. I was too big to stand with them, hence their position on a tree branch. Even if I squatted in the grass I’d be too large in comparison. The only other solution would have been for me to lie on my belly. I didn’t want to think what that would have to done to the dress.

The chubby brownie vicar stood waving his arms at the surrounding mix of monsters, mythical creatures and urban legends. “May all who witness take to heart the joy and solemnity of this occasion. Today, we welcome this child as a citizen of the world, of the community and of her family. Today, we present her name, that she shall go forth in the knowledge of her place in the world, in the community and in her family.”

Molly held her month-old daughter, and Molly’s husband, Walter, beamed with pride beside them. The brownies’ sons, Fred and Aaron, stood next to their father, stiff in their formal robes, and little sister Abbey, dressed in a ceremonial dress of her own, clutched her mother’s petal skirt.

My skirt hit about mid-thigh, while theirs were floor length. My woods didn’t hold nearly enough spiders to complete the dress in my size. As much as I’d like to be fully covered, having another inch of my body coated in the sticky stuff would have been unbearable. I scratched at my arm and realized a welt had formed. Obviously, I was having an allergic reaction.

Love LockDown by A.T. Smith
Walking Backward by Catherine Austen
All The King's-Men (The Yellow Hoods, #3) by Adam Dreece
Liz Ireland by Trouble in Paradise
The Wrong Lawyer by Donald W. Desaulniers
The Blackguard (Book 2) by Cheryl Matthynssens
Olivia's Trek (1) by DM Sharp
Unbound by Olivia Leighton
Heart of an Assassin (Circle of Spies) by Laura Pauling
ThinandBeautiful.com by Liane Shaw