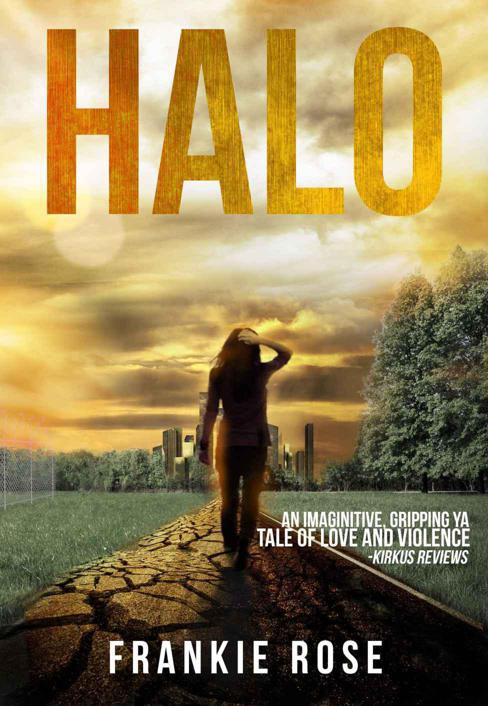 Other Books by Frankie Rose

No part of this publication may be reproduced, distributed, or transmitted in any form or by any means, including photocopying, recording, or other electronic or mechanical methods, without the prior written permission of the author, except in the case of brief quotations embodied in critical reviews and certain other noncommercial uses permitted by copyright law. For permission requests, write to the author, addressed “Attention: Permissions Coordinator,” at
[email protected]

This is a work of fiction. Any resemblance to peoples either living or deceased is purely coincidental. Names, places and characters are figments of the author’s imagination, or, if real, used fictitiously.

For my cheerleaders, I love you all.

Pronunciation and Meanings in Halo

The technician’s hands are cold this morning. Everything is cold. The metal gurney pressing against the backs of my naked thighs feels like it’s been kept in one of the storage freezers. A clock on the wall, simple and white like everything else, ticks out a long minute while the short woman with the neat brown ponytail fiddles with my halo. She runs her icy fingers around the rim of the metal where it meets my skin, circling my throat. She looks pleased.

“You’re competing again today,” she says. This isn’t so much a question as a statement. I compete in nearly every amphi-match. They’re held once a month on the first Saturday. Today is the seventh of March, and it’s a match day. I nod my head and the paper gown they’ve given me to wear rustles like dried leaves. She notes something on the tablet in her hand.

“Okay, I’m going to ask you some questions. Please answer them as honestly as possible.”

I nod again. There is no requirement for me to speak yet. She purses her lips into a tight line as she glances down at the tablet, clearly trying to pick a question at random. I’ve been here so many times that I know them all by heart.

“What did you do this morning?” she asks.

I flex my feet, noticing the skin under my toenails is a violet bruise instead of flushed pink.

“Your mother?” she interrupts. She knows Miranda, the woman I should rightly call Mother, would never need my help with anything. She wouldn’t be caught interacting with Falin.

I huff, realising my mistake. “I helped my
birth
mother organise the children for education. Then I met with Falin Asha and we trained for three hours. Following that, we both proceeded here in answer to our call for halo maintenance.”

The technician taps some more on the screen. I don’t think I’ve had her before, but it’s difficult to know for certain. The technicians follow a script; nothing about them defines themselves from one another, just like everybody else in the Sanctuary. I study her for a moment while she picks another question, wondering how old she is. She could be any age. I’m nearly certain she’s never competed before. If she were Falin, her hands would be scarred, and her skin is entirely unblemished. My palms and forearms have been cut to ribbons over and over, rick-racked with slices that have all shed my blood at some point or another. Defensive wounds. My halo’s healing components took care of them all.

The technician clears her throat. “Your brother is not competing today, but humour me. How would you feel if he fought and was not successful in his match?” Her voice is flat and monotone, yet there seems to be some open curiosity there. Curiosity isn’t outlawed, but it certainly isn’t encouraged. I give her a look that tells her I’ve heard it.

“I would be regretful that he had not applied his training in such a way that ensured his victory.”

“You wouldn’t be sad?” The technician is already tapping away, and I don’t really have to answer. I do anyway, because I am supposed to.

“I wouldn’t be sad. My brother and I are both Falin. We know our duty to the Sanctuary and we carry it out accordingly.”

“Good. And how do you feel about participating in your own match today? Are you afraid?”

I shake my head. Pull a tight smile. “I have no reason to be afraid.”

She makes a small grunting sound that could be construed as a laugh. She knows as well as I do that it is illogical for me to be scared, even if I were capable of it. I am amongst a select few who have never lost a match, even before, when I was a child. Under the age of thirteen, we Falin are pre-mortas, and our matches are a different kind of fighting. All a competitor has to do is land ten points on his or her opponent to be declared victor. Those ten points don’t guarantee that the opponent will die, but they usually do. Our knives are sharp. After our thirteenth year, Falin children become post-mortas, and there’s no such thing as a ten-point victory anymore. Only the rumble of the Colosseum and blood-soaked dirt. Only death.

The technician frowns and makes sure the leads connecting the electrodes on my temples, over my heart, and on the insides of my wrists are securely attached. She pulls her cheek up to one side in a way that suggests she is confused. They do this sometimes, when they can’t work out if I’ve tricked the equipment or if it is broken somehow. I give nothing away.

“I would have thought some concern would be in order, going into this round, Falin Kitsch, given who you are fighting,” the technician muses. The clock ticks out loudly, marking away another minute.

“True. It must be difficult to deduce a strategy, though, what with Falin Asha being your training partner. He will be able to anticipate your every move, will he not?”

I snap my head up and narrow my eyes at her. Falin Asha? I have fought and bled with Falin Asha day in, day out since I was old enough to remember. I didn’t know I was to be pitched against him today, and the look on my face tells her so. Somewhere, for the very first time, a machine blips. Just once. The technician looks relieved. She slowly nods her head, as though she approves of the fact that I’m not a sterile, emotionless monster of my own volition, and my halo does do its job when it’s supposed to. I touch my fingertips to the metal, feeling it warmed and rigid against my skin. I’ve never responded to the questioning before, and to hear the evidence of emotion spike within me is strange. For some reason, I have always assumed I wouldn’t need my halo if I didn’t have it. Apparently, I was wrong. The tiny gears inside whir as they recalibrate, something that happens once a day regardless of whether I feel something I shouldn’t, and I push my chin down so that it rests on the metal.

The technician hands me a signed slip stating that I comply with current emo-control standards, and gestures me to the door. I pad barefoot into the small changing room, lit with a blazing, stark white light, and get dressed.

My brother will have been here earlier, too. They tend to process the Falin by their Houses, an easy task where mine is concerned, since there are only the two of us. My brother is a year younger than me, but he is quick and agile, and very skilled with his blades. I often think about who would win a match between us. The Sanctuary have been known to pitch blood against blood, and it’s with a cold interest that I calculate who would come out on top. Most days I think it would be me. Conversely, I have never thought about who would win a fight between Falin Asha and myself. I suppose tonight we will find out.

I slide my legs into my stiff brown trousers and hike them up, pulling my belt tight. The material is the same as the rest of my combat clothing, taut and heavy duty, difficult to slice with a knife. Once I’m dressed, I leave the changing rooms and head into the compound corridor, where Falin Asha is waiting for me. He leans back against the wall in an odd way that looks like he’s slipping down it. Wavy dark brown hair falls into his face, hiding his expression, but I know he will be biting on his lip. His tics might as well be my own; I know them inside out.

His hands are shoved into his pockets. When he sees me coming, he pushes away from the wall and smiles.

Warm brown eyes greet me, and I can see myself reflected in them, or at least I can see the gleam of the sun flashing off my halo, anyway. His is hidden beneath the collar of his ratty khaki shirt. I offer out my hand and he takes it.

“So, we’re fighting each other today,” he says. I look up at him and hear my halo whir, knowing it shouldn’t be doing that after only recalibrating a second ago with the technician. He gives me a small smile, pretending he doesn’t hear—the polite thing to do.

“I hear we are,” I reply. He pulls me towards the exit, down the metal walkway that leads out of the Sanctuary testing area and into the community square. Our footsteps echo off the high walls of the Sanctuary administration buildings, constructed out of grim-looking grey boxes. We hug the wall for no reason other than we’ve been told to always make sure there’s room for other more important people to pass us by. The outskirts of the compound are inhabited, bordered by the low-lying, single storey dwellings of the most important Houses. Beyond those brick buildings lies the Sanctuary’s inner boundary, a nine-foot tall wall that is decorated on this side by wooden trellises that drip with sunshine-yellow flowers. The other side is decorated with barbed wire and the occasional patch of graffiti where a Radical has slipped through in the night and tagged the crumbling concrete.