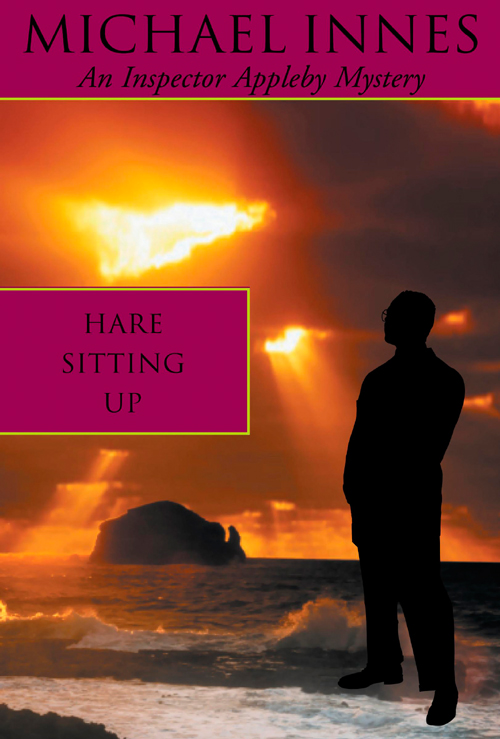 All rights reserved. No part of this publication may be reproduced, stored in a retrieval system, or transmitted, in any form, or by any means (electronic, mechanical, photocopying, recording, or otherwise), without the prior permission of the publisher. Any person who does any unauthorised act in relation to this publication may be liable to criminal prosecution and civil claims for damages.

The right of Michael Innes to be identified as the author of this work has been asserted.

This edition published in 2011 by House of Stratus, an imprint of

Typeset by House of Stratus.

A catalogue record for this book is available from the British Library and the Library of Congress.

This is a fictional work and all characters are drawn from the author’s imagination.
Any resemblance or similarities to persons either living or dead are entirely coincidental.

Reader preferences vary, as do eReaders.

This eBook is designed to be read by any eReading device or software that is capable of reading ePub files. Readers may decide to adjust the text within the capability of their eReader. However, style, paragraph indentation, line spacing etc. is optimised to produce a near equivalent reflowable version of the printed edition of the title when read with Adobe® Digital Editions. Other eReaders may vary from this standard and be subject to the nuances of design and implementation. Further, not all simulators on computers and tablets behave exactly as their equivalent eReader. Wherever possible it is recommended the following eReader settings, or their equivalent (if available), be used:

Michael Innes is the pseudonym of John Innes Mackintosh Stewart, who was born in Edinburgh in 1906. His father was Director of Education and as was fitting the young Stewart attended Edinburgh Academy before going up to Oriel, Oxford where he obtained a first class degree in English.

After a short interlude travelling with AJP Taylor in Austria, he embarked on an edition of
Florio’s
translation of
Montaigne’s Essays
and also took up a post teaching English at Leeds University.

By 1935 he was married, Professor of English at the University of Adelaide in Australia, and had completed his first detective novel,
Death at the President’s Lodging
. This was an immediate success and part of a long running series centred on his character Inspector Appleby. A second novel, Hamlet Revenge, soon followed and overall he managed over fifty under the Innes banner during his career.

After returning to the UK in 1946 he took up a post with Queen’s University, Belfast before finally settling as Tutor in English at Christ Church, Oxford. His writing continued and he published a series of novels under his own name, along with short stories and some major academic contributions, including a major section on modern writers for the
Oxford History of English Literature
.

Whilst not wanting to leave his beloved Oxford permanently, he managed to fit in to his busy schedule a visiting Professorship at the University of Washington and was also honoured by other Universities in the UK.

His wife Margaret, whom he had met and married whilst at Leeds in 1932, had practised medicine in Australia and later in Oxford, died in 1979. They had five children, one of whom (Angus) is also a writer. Stewart himself died in November 1994 in a nursing home in Surrey.

You yourself, don’t you find it a beautiful clean thought, a world empty of people, just uninterrupted grass, and a hare sitting up?

Juniper had been to Oxford to attend a conference of headmasters of preparatory schools. It was the middle of the long vacation, and he hadn’t expected to see many undergraduates. But now, just as his train was about to move out of the station, half a dozen of them tumbled into his compartment. He would have their company non-stop to Paddington. It would be rather a squash.

Actually, there were only five: three men and two girls. As one of the men swung his suitcase up on the rack Juniper noticed that it had been hastily packed. There was the toe of a black sock hanging out at one end, and a scrap of white fur at the other. Of course the scrap of white fur explained matters. It couldn’t be anything but a BA hood. These young people were not undergraduates. They were graduates – of perhaps a couple of hours standing. This was a Degree Day, and with hundreds of others who had lately passed their final examinations they had come up for a graduation ceremony. Three young men and two young women. All with their careers before them.

Juniper found himself taking a deep breath. He hadn’t much cared for the conference; he wasn’t in very good spirits; he was fifty-two. And now here was all this vitality and eagerness crowded round him. Merely as a spectator of it, he had to brace himself by taking this deep breath. Curiously enough, as the train jerked forward, the young man sitting opposite Juniper found it necessary to do precisely the same thing. He took positively a gulp of air.

‘But it still goes on, remember.’ The reply came from a ginger-haired and freckled youth sitting next to Juniper. ‘Chaps sweating through their last long vac now. Hungry generations, getting ready to tread us down. Twelve months, Toby my boy, and they’ll be after the same jobs that we are.’

Toby stretched out long legs on each side of Juniper’s ankles. ‘My dear Arthur,’ he said comfortably, ‘you and I can go a long way in twelve months.’

‘And so can the world.’ A dark young man sitting in the corner diagonally opposite to Juniper looked up from a book he had opened to offer this. ‘Take comfort from that, when you get in a bloody panic job-hunting.’ He glanced at the girl sitting next to him. ‘Sorry,’ he added conventionally.

The girl looked at him in silent scorn. She clearly regarded the habit of apologizing for feeble bad language as beneath contempt. The second girl, who was sitting on the other side of the ginger-haired Arthur, so that Juniper could see nothing of her for the moment except that she was wearing one bright yellow stocking and one bright green, seemed to judge it necessary to bridge an awkward gap. ‘Gavin,’ she said – apparently meaning the dark young man, ‘gets these apocalyptic feelings. There’s nothing in them. The great world rolls for ever down the ringing grooves of change. But far more groove than change.’

The comfortable Toby had produced this. It elicited gasps of ironical admiration all round. Juniper realized that all his travelling companions were acquainted with each other, and they would probably chatter on like this throughout the journey. It might be quite fun. He had nothing to read except a pamphlet which he had picked up at his conference and which he hadn’t much expectation of finding absorbing. But he had better keep his nose in it. If he was felt to be an outsider listening, the talkers might become self-conscious and dry up. Arthur had already given him a sharply considering glance. So Juniper managed a frown of concentration over the blur of print in front of him.

And now the girl to whom Gavin had so ineptly apologized spoke crisply. ‘But some basic things do change. Things that have remained constant for hundreds of years have changed quite a lot between last year and this year. It’s rather striking, really.’

‘Do you mean Alice’s stockings?’ Toby asked. ‘They’re striking – and quite charming. And I suppose they haven’t been happening quite like that since the fifteenth or sixteenth century. Elegant pages in Perugino or Pintoricchio. Terribly nice.’

The girl called Alice, who might have been expected to tuck her legs modestly beneath her at this assault, merely leant forward and scratched her own brightly clothed ankles. ‘Jean means nothing of the sort,’ she said. ‘She means bombs and things.’

‘Oh, bombs!’ Toby sat back as if withdrawing from the talk. ‘Probably I might have said things that have remained constant for millions of years, not just for hundreds.’ The brisk Jean was entirely serious. ‘Take elks.’

‘I mean real elks, particularly in the north of Sweden. The radioactivity in their bones is up by 200 per cent. Contaminated pastures. If Gavin gets apocalyptic feelings, I think he’s entitled to them.’

‘Isn’t it all exaggerated?’ Toby asked, as if with a return of mild interest.

‘Not so much exaggerated as tricky.’ The ginger-haired Arthur was now as serious as Jean. ‘Or that’s what our Provost tells me. And he’s in on radiation, all right. Chief scientific adviser, in fact, to Euratom’s health division.’

There was an impressed silence. Juniper let his pamphlet drop into his lap. These young people were now interesting him very much.

‘And what does your Provost say?’ Alice asked.

‘He says that you have to be damned careful what you say. A scare headline in a national paper might persuade thousands of people that it was dangerous to give their babies milk. And public agitation, if it got out of hand, might cripple a government in effective international negotiation.’

‘To hell with that, anyway,’ Toby said.

Gavin nodded his dark head. ‘Yes, to hell with that.’

And Arthur nodded too. ‘Well, there I agree with you. I’m all for crippling the bastards if they can be crippled. But can they? Not by protest marches, and being a nuisance to bobbies outside research establishments, and all that stuff.’

‘But isn’t what you call “all that stuff” the only thing we have to chuck at them?’ Jean asked. ‘It’s like fighting with bottles, I quite agree. But bottles are better than nothing.’

‘Certainly they are. But our Provost says another thing about popular agitation. It can do all sorts of mischief just by getting its facts half wrong. Suppose that the strontium rate in grass, or in your elks, Jean, goes bumping up sharply just after the Russians have done a series of experiments. Everybody starts shouting that the experiments have been dirty – dirty in the technical sense, that is. And the Russians say No, not at all, they were frightfully careful to make them as clean as clean. At that we all start shouting – those of us that aren’t party-line boys – that Russians are frightful great liars. This might happen, you see, just at a time when there was some chance of a thaw and a general gleam of sense all round. Which would be a disaster. And it would be happening because we hadn’t stopped to collect our scientific facts – all our scientific facts. You see, the strontium percentage bumps up and down for other reasons besides bomb tests. Wet weather or dry is quite enough to set the hypersensitive instruments that measure such things swinging one way or the other.’

Trust Me by Natasha Blackthorne
Henry Tilney's Diary (9781101559024) by Grange, Amanda
Base by Cathleen Ross
April of Enchantment (Sweetly Contemporary Collection) by Blake, Jennifer
The Universe Twister by Keith Laumer, edited by Eric Flint
The Curse of Babylon by Richard Blake
Band of Demons by Rob Blackwell
Tymber Dalton by It's a Sweet Life
Slipstream by Elizabeth Jane Howard
Lord of the Deep by Dawn Thompson