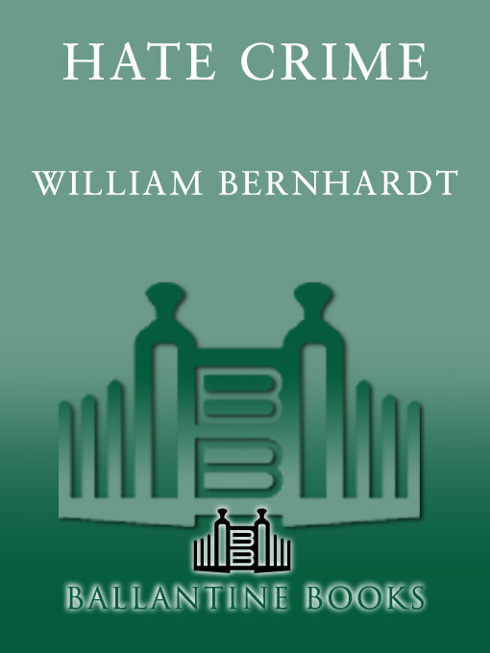 Other Books by William Bernhardt

For Theta Juan,
my mother, who taught her children
that all hate was a crime

In tragic life, God wot,
No villain need be! Passions spin the plot:
We are betrayed by what is false within.

I should feel something more, Mike thought, as he squeezed one eye closed and pressed the other against the scope. Some twinge of reluctance, or regret. A tightening in my gut, a chill at the base of my spine. A tingling beneath the short hairs on the back of my neck. But . . .

All he felt was the strong and unmitigated desire to complete his mission, to do what he had come to do.

If the man would just come a little closer to the window, I could blow his head off, he mused. And would. With pleasure.

Major Mike Morelli of the Tulsa PD Homicide Division pulled his eye away from the reticle and wiped his brow. The world was a different place, viewed through a sniperscope. After three hours of micro-scrutinizing the apartment walls, the windows, the shadowy figures that passed just out of range, he saw everything from a new perspective. It was all deceptively larger, closer, and, as a result, it conveyed an urgency that Mike was having difficulty subduing. He wanted those bastards so badly. If he could rip out their jugulars with his teeth, he would.

The cloud cover barely allowed the sun passage. Here on the street, behind the barricade, there was a distinct coolness in the air, one Mike felt in the marrow of his bones. He had not expected this sort of weather and had not dressed for it. Even his trademark trench coat, a carryover from his younger days when he thought it gave him the stature and credibility his youthful face did not, was insufficient to warm him. It was a gloomy Oklahoma day, the perfect mirror for what he was feeling inside.

With something between a grunt and a sigh, Mike returned his eye to the scope and prayed for a clear shot. C’mon, Mr. Kidnapper, give me a chance. Come to the window for a breath of fresh air, just a tiny bit closer. I’ll give you a view you’ll never forget.

“Move back!”
a man shouted from the darkness of the apartment, his electronically amplified voice sounding more desperate with each word. “Move back or I kill the kid!”

He’d been shouting like that off and on since the siege began, always frenzied, always violent, and always just out of range.

“
I mean it!
If you’re not on the other side of the street in one minute, I’ll ventilate him!”

Mike heard the personal radios surrounding him crackle to life, and a few moments later they were all moving back. Again. Hour twelve of the Sequoyah Heights siege. Progress made: zero.

Mike’s finger rested ever so gingerly on the trigger guard, never past the safety. But if he thought he had a shot, he’d pull that trigger so fast the SOT team and their professional sharpshooters wouldn’t know what happened. He knew he could do it. He could sense the electricity surging through the stock into his shoulder. He could feel the cold steel and smell the leather strap. He had the power of life and death in his hands. But the only part that interested him at the moment was death. He wanted to pull that trigger so badly. Just give me half a chance, he murmured to himself. Just half a chance.

“Are you checked out for that weapon, Major?”

Mike eased away from the rifle, laying it on its side. Party’s over.

“Yes, Special Agent Swift, I am. As a matter of fact, I’m checked out for about every kind of weapon there is. But I was only using the scope to surveil the apartment.” And if you believe that . . .

“Just making sure. Don’t want any screwups on my watch.”

Her watch? When the hell did this become her watch? That was the problem with Feebies—one of several. They couldn’t cross the street without trying to take charge.

“Our first priority is getting that little boy out alive,” Mike reminded her.

“I’m well aware of that,” Agent Swift replied. She was a petite but strong woman, Mike observed, not for the first time. Dark hair, an almost perfect match to her turtleneck. Gun holstered by shoulder strap, visible when her jacket pulled back. She managed to bring off that no-nonsense, don’t-mess-with-me look without suggesting that she had an ax to grind. “But if one of my men gets a shot at one of the kidnappers, I can damn well guarantee we’re going to take it.”

“Good to know. Of course I wouldn’t dream of interfering.”

She gave him a long look. “I’ve always prided myself on my ability to work cooperatively with local law enforcement.” Mike had to grin, both because he knew that was a crock, and because for a moment he was certain she was going to say, “I’ve always depended upon the kindness of strangers.” Swift had come from the Chicago office of the Bureau, but she was originally from the Deep South—an Alabama girl, if he recalled correctly. Mike loved the accent—a pleasant change from the unenunciated drawl you got in Oklahoma the closer you moved to the Texas border. “That’s why you’re here. I wanted to keep the locals involved, but I can’t have you endangering the success of my operation with any hotdog stunts.”

Mike peered at her credulously. “Where would you ever get the idea I might try some hotdog stunts?”

“From everyone who knows you. Including Chief of Police Blackwell.”

Damn him, anyway. Whose side was he on?

“I also know you’re not so crazy about working with FBI agents. I heard what happened during the Lombardi case, so I guess you’ve got your reasons, but I still—”

“You still won’t let me endanger the success of your operation. I got that, Special Agent. I’ll keep my nose clean.”

“Until we catch the kidnappers. Afterward . . .” She cocked her head to one side. “You can try anything you want.”

Now what was that supposed to mean? he wondered, as he watched her move down the line and start in on one of the snipers. Was this FBI agent flirting with him? That would be a gross impropriety. And darned flattering.

He stood and buttoned his rumpled coat around his forty-four-inch chest. All of a sudden he was glad he’d dropped that postsmoking weight. Those trips to the gym might’ve been worth it, too.

But he didn’t need any distractions at the moment, or anything confusing his feelings. Eyes on the prize, he told himself. First we take down the pond scum in that apartment. He surveyed the phalanx of men surrounding him on the street, as well as the similar lineup on the rooftop of the office building just behind. Even if he didn’t particularly care to acknowledge it, Swift had done a first-rate job organizing this detail. She had everyone in place and ready to roll. There was no way those child-abusing monsters were going to escape this net. It was just a matter of time, a thought which filled him with a strange warmth. If only there was some way to accelerate the process.

Off to the left, he spotted two familiar faces moving in his direction.

“Stand at attention, Special Agent,” he said, raising his voice so she could hear. “The parents.”

Two well-dressed adults arrived at about the same time she did. The man was wearing a tailored suit and a starched white shirt. The woman wore a dark dress and clutched a DK handbag. At first blush, Mike read the man as angry, which meant guilt-ridden, and read the woman as angry, which meant terrified. But he supposed he could be wrong. He had been wrong before. Once.

“I’m Harrison Metzger. Which one of you is in charge?”

“I am,” they both answered, Swift, because she was, and Mike, because he had the irresistible urge to give her ego a tweak. They exchanged a pointed look.

Metzger turned to Agent Swift. They always went to the Fed, Mike noted. The Oklahoma inferiority complex. Anyone from out of town had to be smarter than a local. “I want to know what’s being done to save my son. Looks to me like you’re all just sitting around on your asses.”

To her credit, Swift remained unruffled but not unsympathetic. “Mr. Metzger—”

“Doctor,” she corrected. “I’ve had my public relations liaison brief you every hour. I think you know everything we do. We’re waiting for an opportunity—”

“Who are these people, anyway?”

“The kidnappers? We don’t know their names. We believe there are four of them, working together. The one who keeps speaking into the bullhorn is obviously male. The others, we’re not sure.”

“I don’t understand why this is taking so long. You know where my boy is. Go in and get him!”

“Before, your excuse was that you didn’t know where they were. Now you’ve got them surrounded, and you’re still not doing anything!”

Mrs. Metzger stayed a safe distance behind her husband. Mike had the sense that she was embarrassed by her husband’s tirade, but she knew better than to interfere.

“We don’t think it would be prudent to storm the apartment. We know they’re armed—”

“So what’s the problem? Show some balls, girl.”

Agent Swift paused barely a beat before responding. “Sir, I can assure you that when the time is right for action, we will take it. But at the moment, our top priority is getting your son out safely, which means avoiding, if possible, an exchange of fire that might endanger—”

“This is what happens when you put a woman in charge.” He shifted his gaze to Mike. “Is there something you can do, Major?”

“I’m just here to support Agent Swift, sir. Whether you realize it or not, she’s playing this by the book. And doing a first-rate job of it.”

“Do you people know how long my son has been their captive?” His confrontational mask cracked a fraction. “There’s no telling what . . . what they might have done to him!”

“I understand your concern, Mr. Metzger—”

Mike drew in his breath. The man was a Ph.D., which, to his mind, barely counted and certainly didn’t justify constant correction. But this was not the time to digress. “Dr. Metzger, from the start, we have moved as quickly as possible. And that hasn’t changed. But what’s most important is that we get Tommy out alive. Remember, the ransom demand came in almost immediately, and you paid it according to their directions. We have no reason to believe the boy has been molested.”

That, of course, was a lie, statistically speaking, anyway. As Mike knew all too well, more than 90 percent of all noncustody-related child kidnappings involved some form of molestation. But in most cases the child turned up again relatively soon, after the kidnapper had taken what he wanted. When the child was held for longer than twenty-four hours, the statistics became far more grim. Less than 50 percent of those kids ever made it home again.

Tommy Metzger had been gone for eight days.

“What about poison gas?” Metzger continued. “What about a flamethrower? I want those men laid low! I want them to pay for what they’ve done to my family!”