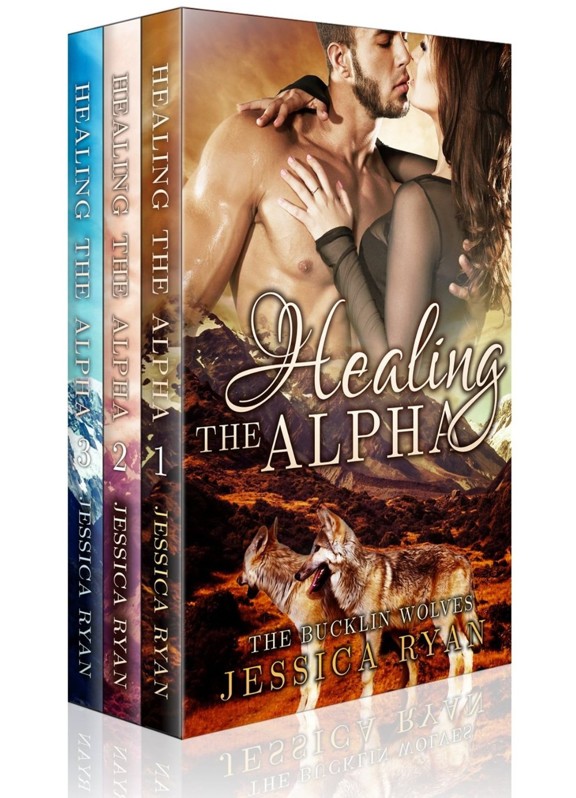 The
crown weighs heavy on the king who has loved and lost. These words play through
Aster's head every single day. It has been ten years since he watched the love
of his life, Leena, sacrifice herself to save the packs of Bucklin.

It has
been ten long years of rule as the head alpha of the werewolf town, but now
it's all come to a head as the motorcycle gang, Satan's Angels, return to
finish the job.

Aster
isn't sacrificing anything this time, he's going to fight and reclaim the only
woman he's ever loved.

This
is it: the climactic final battle between The Bucklin Wolves and Satan’s
Angels.

Head
alpha Aster has been captured by the enemy and awaits his final fate, but he
has one more trick up his sleeve to defeat the demon Abaddon—he just needs the
opportunity to get it.

Meanwhile
Leena struggles inside her own mind as the demon that possesses her controls
her every movement. She knows she has to fight to finally reunite with her lost
love, but how?

Both
long lost lovers find themselves in a perilous situation where they must fight
with everything they have to reunite with the one person that matters in their
life: their mate.

Alpha
wolf Aster finally has what he's been waiting for the last ten years: the love
of his life Leena back at his side. But his duties as alpha will keep him from
catching up too much as a mob mentality grips the shifters in his town.

This
is a collection of all three parts of Healing the Alpha and the fourth collection
in the Bucklin Wolves saga.  For readers
18+

This ebook is licensed for your personal enjoyment only. This ebook may not be re-sold or given away to other people. If you would like to share this book with another person, please purchase an additional copy for each reader. If you’re reading this book and did not purchase it, or it was not purchased for your use only, then please return to your favorite retailer and purchase your own copy. Thank you for respecting the hard work of this author.

This is a work of fiction. Names, characters, places and incidents either are products of the author’s imagination or are used fictitiously. Any resemblance to actual events or locales or persons, living or dead, is entirely coincidental.

CONTENT WARNING
: This short story contains adult material with explicit sexual situations and language. All sexually active characters in this work are 19 years of age or older.

PLEASE NOTE:
This book is for sale to ADULT AUDIENCES ONLY. It contains sexually explicit scenes, graphic language and may be considered offensive by some readers. Please store your files where they cannot be accessed by minor.

CLICK HERE
to be taken to a full list of Jessica Ryan books including a schedule of future release.

Aster gripped the arm rest on his large leather reading chair and stared out the window at the town—
his
town. He could see nearly all of Bucklin from his home on the hill just outside of town. He always kept a watchful eye on his people. The responsibility of being alpha always weighed heavily.

Most days he wanted to rip off the three-piece straitjacket of a suit he wore for day-to-day business and run free through the woods, hunting his food and marking his territory. Those days were over, though; his grandfather's generation had seen to that. Now he had responsibilities not unlike those of any small town mayor, while also balancing the need to be a strong alpha leader.

I've been too weak,
he thought as he watched the motorcycles pull up to his front gate.
I'm an alpha, not a mayor. I should lead by example, not through the pen on my desk.

Satan's Angels had finally come back. He had cursed himself every day for letting the one light in his life go. For what? To create some truce that was going to be broken someday anyway? That day ten years ago still gnawed at him constantly. He should have stood and fought for what was right. Leena was his mate and the only wolf he would ever love, so why hadn't he stood up to Abaddon?

Any other wolf on the planet would have fought to the death to protect his one true mate. The mental bond between Aster and Leena was strong, stronger than any other wolf could have. They were just kids, silly little eighteen-year-old kids, but there was a fiery passion that burned between the two.

I let it all go,
he thought.
All so I could save my people.

If Aster had fought Abaddon, he might have died due to the demon's power. What then? His people were scared, hiding with their tails tucked between their legs. He had to be around to protect them; that was the alpha's burden.

Now his people were huddled in their homes, hiding as the demons returned to finish what they had started ten years ago. Had Hawk failed in finding Leena? Abaddon had promised them more time to find her and return her, but now he was here ahead of schedule.

His thoughts drifted to another possibility, one that he wasn't ready to accept. Maybe Leena had been killed and Abaddon knew it. One of their own had betrayed them by kidnapping Leena, possibly.

She had to have escaped on her own,
Aster thought.
It's the only explanation, because who would be stupid enough to kidnap her?

Had Hawk failed in his mission? Was she dead? That was another thought he had considered but didn't want anything to do with. Even though he hadn't seen his love in ten years, he would know if she was gone. The mental bond they had shared was strong and it still existed on some level.

For the past ten years he had felt emotions that didn't emanate from his own body. They were someone else's emotions, faintly gnawing at the back of his heart. Somewhere in the dark recesses of his mind they lingered and struck so softly that he would miss them if he wasn't looking for them.

They were a mix of fear, sadness and regret. Wherever Leena was, she wasn't happy and she hadn't been happy for ten years. And it was all Aster's fault because he hadn't stood up and fought the way a wolf should.

I should have never let her sacrifice herself,
he thought as he stood from his chair and casually began to remove his shirt. The yard in front of his house was filled with the sounds of motorcycles roaring and men yelling as they parked their hogs.

Pigs,
he thought.
That's all they are: pigs being led to slaughter.

He was going to find out what had happened to Leena, find out where his love was. Her emotional pain had tortured him for ten years and it was time to bring his one and only love home. Abaddon had broken the truce; Aster was no longer bound by it. There was no reason to leave her with Satan's Angels—his baby was coming home.

Aster closed his eyes and took a deep breath, trying to remember the first day he had met Leena. The first day he had realized that there was more to this world than what was shown. Quite possibly the most wonderful day of his life.

"Who are you?" the girl asked with a quizzical look.

"This is Aster," Rowan said, patting his friend on the back. "He's coming over for dinner tonight."

"Does Mom know about that?" the girl asked, putting her hands on her hips and sneering at her older brother.

"Who cares?" Rowan asked. "We always have plenty of food. You're so annoying, Leena!"

Aster watched as Rowan reached over and grabbed one of his sister's long black pigtails and yanked, causing her to cry out in pain. Rowan was his friend, the only friend he had in the world. He was the only kid who would play with him on the playground and the only one who would attempt to help him in class, but Aster found himself wanting to put his hands on his friend and remove him from the situation. He held his tongue and hands in check, but he was incredibly bothered by what he saw.

To his surprise, Leena could hold her own. As she screamed from her hair being pulled, she brought her hand right up into Rowan's crotch, grabbing him by the balls and squeezing. Immediately Rowan released her and began to slap at her hand, trying to make her let go of his most sensitive area.

"You're dead, Leena!" he yelled, reaching out and slugging her on the arm. She cried out in pain and let go of him, slinking back and grabbing at her arm.

"What in god's name is going on in here?" a booming voice asked.

All three children spun around as a mountainous man burst through the playroom door. He had wild, unkempt hair that hung close to his shoulders. His chest was broad and his shoulders looked like boulders. He wore nothing but an old tank top and some sweatpants, but he appeared to be stronger and more dominating than any man Aster had ever met.

"She started it," Rowan said sullenly.

"No, he did," Leena said, pointing her finger right in Rowan's face.

"Get your finger out of my face or I'll shift and bite it off!" Rowan threatened.

"Nobody's shifting anywhere except onto my lap for a spanking!" the man roared. "Who the hell is that?"

All eyes in the room were now centered on Aster. He could feel his face growing hot, but he knew if he backed down now he would lose Rowan and his father forever. He needed this; he needed to be accepted by someone.

"My name is Aster, sir," he said, standing up straight and puffing his chest out.

"And what are you doing here, Aster?"

"Well, sir…" He tried not to stumble. He was only eight, but he knew the importance of strength in the eyes of an alpha wolf. He was no dummy; he knew who Rowan's father was: Luke, the head alpha of all of Bucklin. "Rowan invited me for dinner."

"Don't you have your own house to eat at?" Luke asked.

One of Luke's eyebrows rose as he studied the child before him.

"My mom doesn't do anything except lie in bed now, sir," he said.

"My father challenged Forrest for pack supremacy and he, umm, well, he lost."

Luke's hard expression softened and he let out a long sigh. "I thought we were done with the old ways. That goddamn Forrest. Sure, kid, you can eat with us tonight."

"Come on, Aster!" Rowan said, forgetting his quarrel with his sister as he bounded for the door. "Let's go eat!"

Aster lingered for a second, looking at Leena, who was still rubbing her arm.

"What?" she asked, glaring at him.

"Those were some pretty good moves," he said, trying to give her his best smile.

"Yeah," she said as she rolled her eyes. She let out a long sigh and glanced at the door; she obviously wanted to be anywhere but standing there talking to Aster.

Michelangelo And The Sistine Chapel by Andrew Graham-Dixon
Legend of Sleepy Hollow and Other Writings (Barnes & Noble Classics Series) by Washington Irving
Candice Hern by In the Thrill of the Night
Nurse Trent's Children by Joyce Dingwell
Beyond Wild Imaginings by Brieanna Robertson
0.5 Deadly Hearts by SM Reine
Rachel Haimowitz & Cat Grant - [Power Play 1] by Power Play Resistance
Rivers West by Louis L'Amour
The Last War (Book #9 of the Sage Saga) by St. Clair, Julius
The Prince in Waiting by John Christopher