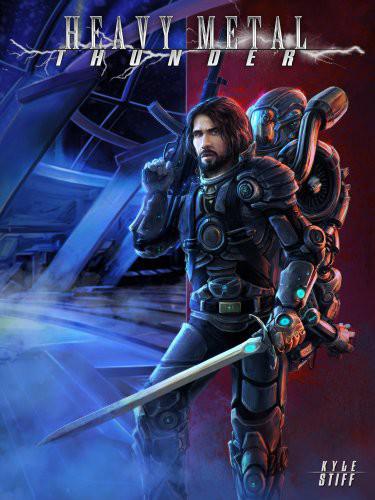 For news and info about the Heavy Metal Thunder
series, visit the web site at
www.heavymetalthunderseries.wordpress.com
.
To contact the author, Kyle B. Stiff, send a letter to
[email protected]
.

This book is dedicated to the fighters. It is
copyrighted and belongs to the author.

What Is Heavy Metal
Thunder?

Index: Short History of the
Invasion

Index: How Battles
are
Fought
Between Capital Ships


What Is Heavy Metal Thunder?

Heavy Metal Thunder is not a novel. It is a game,
the first in a series in which you play the role of the protagonist. You begin reading
at section 1 and then, depending on the choices you make, turn to the numbered
section you are directed to read. The game ends when you reach the end of the
journey... or when you die.

The rules of the game are given as the story
unfolds, plus there is a handy index in the back. Eventually you will have to
keep track of your inventory, stats, skills, experience points, and so on. The
journey will be brutal. Because the universe is cold and uncaring, you will
need to be cunning and ruthless in order to survive. As you progress through
the game, your character will grow in strength and experience. In future
installments of the Heavy Metal Thunder series you will rise up through the
ranks of the Black Lance Legion, so be sure to keep your character data so that
you can transfer it to
Heavy Metal Thunder Book Two: Sol
Invictus
.

Variant rules for non-nerds:
If you loved Choose Your Own Adventure books back in the day, but the idea of
keeping track of skills and equipment sounds altogether too complicated and
nerdy, then feel free to simply follow the branches of the story and make
choices as you see fit. No one will fault you for enjoying the story in a
non-nerd fashion.

A field of stars stretches out before you. You float
weightless in empty space. It is difficult to breathe, and your body feels
constricted, as though it were encased in padding. You move to rub your aching
head, and your gloved hand smacks into a hard helmet. You blink painfully,
then
wave your limbs to shake off an overwhelming sense of
grogginess.

You try to remember who you are, what you are doing
here. Nothing comes to mind.

You realize that there is a hissing sound in your
helm. Each breath seems more labored than the last. It feels as if you are drowning
in nothingness. The cold stars watch you without mercy.

Suddenly, something floats into your field of
vision, and you recoil in horror: A dead man’s body, spinning in space, floats
past you. His face is purple and cracked, his eyes are popped out of their
sockets, and his bloated tongue hangs out like a rat fleeing a sinking ship. He
wears torn green coveralls, and a logo on the back reads, “STELLAR Corporation.
Bringing Life to the Stars!”
The body spins away.

You try to calm yourself. Unconsciously, you click
your teeth together. A display screen buzzes to life on the visor of your
helmet. Though surprised, something seems familiar about the display. One
section reads

You reach backwards and feel a large, bulky device
strapped to your back. You are clothed in some kind of black, padded bodysuit,
with all kinds of straps that hold the “jetpack” in place, and a belt full of
pouches.

What the hell am I doing with all this
crazy gear?
you
wonder.

Your left hand twitches, and you see a series of
buttons on the palm of your glove. You are sure that these somehow control your
jetpack. Your hand shakes, eager to feel the freedom of movement.

You push a series of buttons, not fully knowing what
you are doing. You feel a surge at your back and the field of stars shifts
around you. The push of the jetpack behind you feels familiar. You do an
about-face. What you see makes you question your decision to wake up.

Your knees tremble and black goblin-spots dance
around in your eyes. You realize that the lights and the sound are part of a
psy
-op weapon designed to disorient the human nervous
system. Your stomach kicks and a meal that you don’t remember eating rockets
out from you and sprays onto the floor: Lose
1 Blood
. You stumble
backwards on loose spaghetti-legs, leave the chamber, and shut the door behind
you.

The Captain laughs at you, then says, “Why don’t you
just move along and -”

One of the guards loudly primes his rifle, then
shouts, “Hey dipshit... why don’t
you
move along?”

The Captain turns and the blood drains from his face
when he realizes the guards are talking to him. While he fumbles with his
revolver, trying to decide what to do, the other guard stands near the first
and giggles menacingly.

With that, the Captain leaves, disappearing into the
teeming crowd.
He’s got a gun and a belt that he can use as a whip
, you
think.
He’ll do fine
.

You turn toward the ship. While the laborers seem
confused, the guards only laugh. “Ahoy,
Cap’n
!” one
of them shouts, high-fiving the other.

Guess he wasn’t too popular around here
,
you think. “Gentlemen!” you shout. “Back to work, if you please!”

You gain
1 XP
for commandeering a ship. Turn
to section
379
.

Skull shaking from the motion of the powerful deconstructor,
you manage to destroy the panel on its flank,
then
you
rip open some inner protective cover. You see something like a row of circuit
boards. You reach inside and pull the array loose from its moorings. You look
up just in time to see the north hallway wall looming before you; before you
have a chance to destroy the circuit boards, you release your grip and slide
toward the darkened hall from which the machines emerged.

You grab the grappling mechanism hooked to your belt
and turn it on. The device slowly hoists you away from the vacuum and the
deconstructor. You glance at the circuit boards, hanging loose from the
machine; as it grinds through the northern hallway, the boards are smashed
against the rubble. The machine grinds to a halt and you whoop loudly.

You hear a series of explosions in the distance, as
the guard must have thrown or dropped his grenades into the other
deconstructor. There is a terrible crash as the two
slam
into one another. The ruined hulks slide into the hole from which they emerged,
spouting steam and sparks and, as the hole is nearly sealed, the raging wind
becomes still and you drop to the ground. You rise slowly, disconnect your line
from the wall, and stumble over the dead machines. You see the guard rising
also, unarmed,
shaking
his head wearily. The two of
you stumble to another hallway and collapse, exhausted.

You gain
3 XP
for successfully destroying the
deconstructors. If you used any bullets in your attack, be sure to erase them
from your inventory before you turn to section
126
.

“Shut up!” the manager screams on the other end. The
robot rumbles forward, steel appendages rotating, fork-lift mechanism grinding.

If you are trained in
Stealth
, and have a
Motion-Sensitive
Bomb
, you can try to trap the robot and destroy it by turning to section
288
.

If you have a
High-Power Implosion Grenade
,
you can use it by turning to section
263
.

If you have a gun and at least 1 bullet, you can try
to shoot its dome off by turning to section
331
.

Otherwise, you will have to get close enough to
smash its sensor-dome. Brace yourself,
then
turn to
section
228
.

“What
d’you
mean?” you
say, gun wavering for a moment.

“Well,
them
robots
is
all over the place, right? And all our ships are
wasted,
and no help
comin
’. What’s
it look like’s gonna happen, man?” The man laughs. “Anyway, the hell you come
from?”

“None of your business,” you say. “Is it true that
you have no ships here?”

“Hell no, not a one,” he drawls. “Invader made sure
to hit our docks pretty hard.
Nothin
’ but scrap metal, now.”

“
S’far
as I know, this
little heap took about the least o’ the damage. Besides, it’s not like we got
any suits or ships to go check the others out, right?”

You eye one another for a moment. Then the man says,
“Anyway, I was just about to head to a supply room. Big Boss is still in
charge, I guess... he wanted me to see if we got
anythin
’
useful.”

“How many of you are there?”

“Five.” Then he glances at his comrade and,
laughing, says, “Well, four, I reckon!” After his laughing fit passes, he says,
“I thought about
killin
’ the Boss myself... hated him
a pretty good bit all these years.
Might feel good to do it,
too.
Then again, it’s not like I’m gonna remember how good it felt
wasting him after I’m dead. Anyway, you
wanna
come on
down to the supply room?”

Fully suited and ready to rock, you run down the
red-flashing corridor. As you near the launching bay ship personnel and
infantry run all about, shouting orders and chanting out war cries and
complaining. As you see the units gather
,
part of your
memory comes back. You remember that most infantry units are named after Earth
cities from before the war, sentimental monikers that often hearken back to old
sports teams. You see the Detroit Lions, the Kentucky Blood Hunters and the
Dallas
Blackbloods
, the Constantinople Rangers, the
elite Athens Panthers, the Vegas Krakens trading insults with the Jericho
Horsemen. You are desperate to go out with any of them, just to face the
Invader ship that started you on your horrible odyssey.

Got to get out there
,
you think, blood heating and turning your heart into a white-hot forge.

You see the trainer, Major Faustulus, barking orders
at a group of gangly youths shaking in their space suits. You wonder if you
were ever so scared of the monsters that turned your homeworld into a slag
heap. You push past them and shout, “Major Faustulus! What’s my unit, sir?”