Read Hector and the Secrets of Love Online

Hector and the Secrets of Love 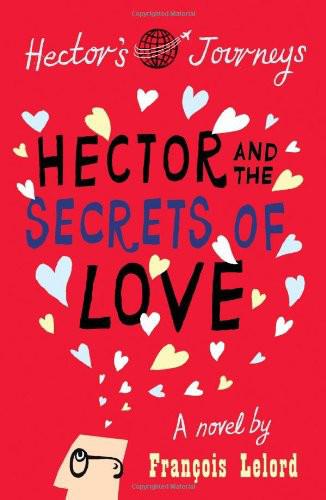 Table of Contents
Title Page
Dedication
Copyright Page
HECTOR AND THE CHINESE PICTURE
HECTOR LOVES CLARA
HECTOR AND CLARA GO TO THE BEACH
HECTOR GOES TO A MEETING
HECTOR HEARS ABOUT LOVE
HECTOR TALKS ABOUT LOVE
HECTOR IS WORRIED
HECTOR ACCEPTS A MISSION
HECTOR TAKES TO THE AIR
HECTOR DOES SOME HISTORY AND GEOGRAPHY
HECTOR MEETS VAYLA
HECTOR MAKES A GOOD FRIEND
HECTOR AND THE TEMPLE IN THE JUNGLE
HECTOR TAKES RISKS
HECTOR IS THOUGHTFUL
HECTOR SUFFERS
HECTOR MAKES A CHOICE
HECTOR MAKES LOVE
HECTOR HAS A REST
HECTOR IS ABLE TO READ
HECTOR TAKES TO THE AIR AGAIN
PROFESSOR CORMORANT’S LETTER
HECTOR AND THE JADE BEAM
HECTOR AND VAYLA VISIT THE ZOO
HECTOR ISN’T THERE
HECTOR MEETS UP WITH A GOOD FRIEND
HECTOR REMEMBERS
HECTOR IS NEEDY
CLARA STILL LOVES HECTOR
HECTOR AND JEALOUSY
CLARA IS SAD
HECTOR’S LIFE IS COMPLICATED
HECTOR IS CROSS WITH HIMSELF
HECTOR MAKES AN IMPORTANT DISCOVERY
HECTOR’S LIFE IS COMPLICATED
HECTOR GOES FOR A DRIVE
CLARA MEETS VAYLA
HECTOR DOES SOME SCIENCE
HECTOR HAS A SHOCK
DO HECTOR AND CLARA STILL LOVE EACH OTHER?
HECTOR IS ANGRY
HECTOR CALMS DOWN
GUNTHER LOVES CLARA
HECTOR AND THE LITTLE MOUNTAIN FAIRIES
HECTOR WRITES IN THE DARK
HECTOR MEETS HIS COUSINS
HECTOR IS AN ETHNOLOGIST
HECTOR AND THE RISING SUN
HECTOR BLOWS SOMEONE’S COVER
THE PROFESSOR AND THE ORANG-UTAN
GUNTHER IS SCARED
HECTOR IS A GOOD DOCTOR
HECTOR AND THE FIFTH COMPONENT
HECTOR IS FLABBERGASTED
HECTOR IS MOVED
HECTOR CONTROLS HIMSELF
HECTOR IS TRICKED
HECTOR LOSES HIS TEMPER
HECTOR RECEIVES A LESSON IN GNA-DOA WISDOM
HECTOR WINS
HECTOR AND CLARA AND VAYLA
HECTOR SAVES LOVE
HECTOR HAS A DREAM
EPILOGUE
Acknowledgements
Teaser chapter
PENGUIN BOOKS
HECTOR AND THE SECRETS OF LOVE
François Lelord has had a successful career as a psychiatrist in France, where he was born, and in the United States, where he did his postdoc (UCLA). He is the co-author of a number of bestselling self-help books and has consulted for companies interested in reducing stress for their employees. He was on a trip to Hong Kong, questioning his personal and professional life, when the Hector character popped into his mind, and he wrote
Hector and the Search for Happiness
, the first novel in the series, not quite knowing what kind of book he was writing. The huge success of
Hector
, first in France, then in Germany and other countries, led him to spend more time writing and traveling, and at the height of the SARS epidemic he found himself in Vietnam, where he practiced psychiatry for a French NGO whose profits go toward heart surgery for poor Vietnamese children. While in Vietnam he also met his future wife, Phuong; today they live in Thailand.
François Lelord’s series of novels about Hector’s journeys includes
Hector and the Search for Happiness
and
Hector and the Search for Lost Time
. Turn to the back of this book for the opening chapters of
Hector and the Search for Lost Time
.
To all those who have been the inspiration for Hector
PENGUIN BOOKS
Published by the Penguin Group
Penguin Group (USA) Inc., 375 Hudson Street, New York, New York 10014, U.S.A.
Penguin Group (Canada), 90 Eglinton Avenue East, Suite 700, Toronto, Ontario, Canada M4P 2Y3 (a division of Pearson Penguin Canada Inc.) • Penguin Books Ltd, 80 Strand, London WC2R 0RL, England • Penguin Ireland, 25 St Stephen’s Green, Dublin 2, Ireland (a division of Penguin Books Ltd) • Penguin Group (Australia), 250 Camberwell Road, Camberwell, Victoria 3124, Australia (a division of Pearson Australia Group Pty Ltd) • Penguin Books India Pvt Ltd, 11 Community Centre, Panchsheel Park, New Delhi – 110 017, India • Penguin Group (NZ), 67 Apollo Drive, Rosedale, Auckland 0632, New Zealand (a division of Pearson New Zealand Ltd) • Penguin Books (South Africa) (Pty) Ltd, 24 Sturdee Avenue, Rosebank, Johannesburg 2196, South Africa
Penguin Books Ltd, Registered Offices: 80 Strand, London WC2R 0RL, England
First published in Great Britain by Gallic Books 2011
Published in Penguin Books 2011
Copyright © Éditions Odile Jacob, 2005
Translation copyright © Gallic Books, 2011
All rights reserved
Translation by Lorenza Garcia
Originally published in French as
Hector et les secrets de l’amour
by Éditions Odile Jacob, Paris.
Page 282 constitutes an extension of this copyright page.
Publisher’s Note
This is a work of fiction. Names, characters, places, and incidents either are the product of the author’s imagination or are used fictitiously, and any resemblance to actual persons, living or dead, business establishments, events, or locales is entirely coincidental.
LIBRARY OF CONGRESS CATALOGING IN PUBLICATION DATA
Lelord, François.
[Hector et les secrets de l’amour. English]
Hector and the secrets of love: a novel / François Lelord.
p. cm.
eISBN : 978-1-101-52871-6
1. Psychiatrists — Fiction. 2. Love — Philosophy — Fiction. I. Title.
PQ2672.E489H4313 2011
843.92 — dc22
2011007039
The scanning, uploading and distribution of this book via the Internet or via any other means without the permission of the publisher is illegal and punishable by law. Please purchase only authorized electronic editions, and do not participate in or encourage electronic piracy of copyrighted materials. Your support of the author’s rights is appreciated.

‘A
ll we have to say to him is: “My dear doctor, you’re going to help us discover the secret of love.” I’m sure he’ll consider it a very noble mission.’
‘Do you think he’s up to it?’
‘Yes, I do.’
‘He’ll need persuading — you have the necessary funds.’
‘The most important thing, I think, is to make him feel he’ll be doing something worthwhile.’
‘So we’ll need to tell him everything?’
‘Yes. Well, not everything, if you see what I mean.’
‘I understand.’
The two men in grey suits were talking late at night in a big office at the top of a tall building. Through the picture windows the bright city lights shone as far as the eye could see, but they didn’t take any notice of them.
Instead they looked at some photographs they had taken from a file. They were glossy portraits of a youngish man with a preoccupied air.
‘Psychiatrist, what a strange occupation!’ said the older man. ‘I wonder how anyone can stand it.’
‘Yes, I wonder, too.’
The younger man, a tall, strapping fellow with cold eyes, replaced all the photos in the file, which was marked ‘Dr Hector’.
HECTOR AND THE CHINESE PICTURE
O
NCE upon a time there was a young psychiatrist called Hector.
Psychiatry is an interesting profession, but it can be very difficult, and quite tiring as well. In order to make it less tiring, Hector had brightened up his consulting room with some of his favourite pictures. In particular, a picture he’d brought back from China. It was a large redwood panel decorated with beautiful Chinese characters – or, for those who like to call things by their proper names, ideograms. When Hector felt tired after listening to all the problems people talked to him about, he would look at the beautiful gilded Chinese script carved in the wood and feel better. The people sitting in the chair opposite him talking about their problems would sometimes glance at the Chinese panel. It often seemed to Hector that it had a calming effect on his patients.
A few of them would ask Hector what the Chinese characters meant, and this embarrassed Hector because he didn’t know. He couldn’t read Chinese, still less speak it (even though he’d once met a nice Chinese girl, over in China). When you’re a doctor, it’s never very good to let your patients see that there’s something you’re not sure about, because they like to think that you know everything; it reassures them. And so Hector would invent a different saying each time, trying to come up with the one he thought would do most good to the person concerned.
For example, to Sophie, a woman who had got divorced the previous year and was still very angry with the father of her children, Hector explained that the expression in Chinese meant ‘He who spends too long regretting his ruined crop will neglect to plant next year’s harvest’.
Sophie had opened her eyes wide and after that she’d almost stopped talking to Hector about what a dreadful man her ex-husband was.
To Roger, a man who had a habit of talking to God in a very loud voice in the street (he believed God talked to him, too, and could even hear his words echoing in his head), Hector said that the expression meant ‘The wise man is silent when communing with God’.
Roger replied that this was all very well for the god of the Chinese people, but that he, Roger, was talking to the real God, and so it was only natural for him to speak loud and clear. Hector agreed, but added that, since God could hear and understand everything, there was no need for Roger to talk to Him out loud; it was enough just to think of Him. Hector was trying to save Roger from getting into trouble when he was out and about, and from being put in hospital for long periods. Roger said that he ended up in hospital so often because it was the will of God, and that suffering was a test of faith.
On the one hand, Hector felt that the new treatment he’d prescribed Roger had helped him express himself more clearly and made him a lot more talkative, but, on the other, it didn’t make Hector’s job any less tiring.

A Wild Swan by Michael Cunningham
Vampire Cowboy by Chastain, Juliet
Alien Upstairs by Pamela Sargent
The Billionaire and I (Part Three) by Ava Claire
Guys on Top by Darien Cox
The Afterlife of Billy Fingers: How My Bad-Boy Brother Proved to Me There's Life After Death by Kagan, Annie
One Summer by Karen Robards
Fallen Angel by Willa Cline
The Bishop's Boys by Tom D. Crouch
Strip for Me by Amarinda Jones