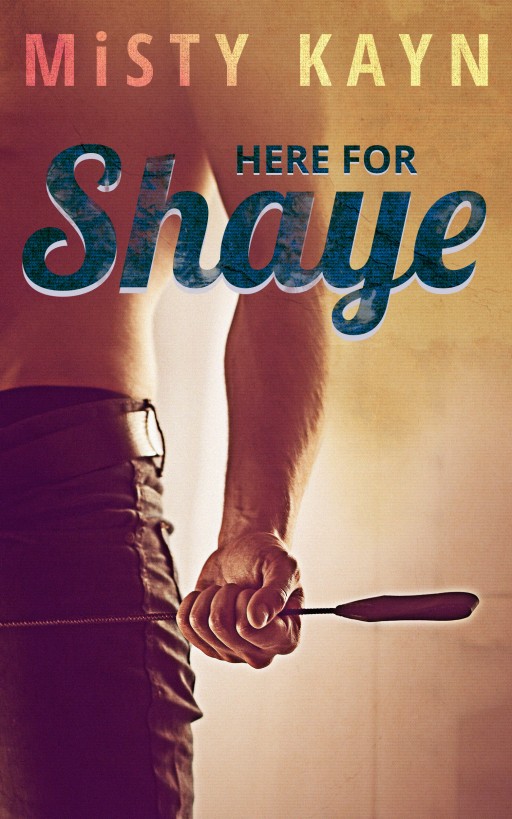 Bound by Ink: HERE FOR SHAYE

What is Bound by Ink?

This story is a work of fiction. Names, characters,
places and incidents are the products of the writer's imagination.
Any resemblance to actual events, locales, or persons (living or
dead) is entirely coincidental.

This eBook may not be sold, manipulated or reproduced
in any format without the express written permission of the
author.

A woman with long blond hair is kneeling on top of a
man. She is wearing a white long sleeve shirt with grey stripes.
Her white skirt is pushed up around her waist revealing a reddened
butt. The man below her is wearing a white short-sleeve shirt with
grey stripes. He has a distinct black tattoo just below his elbow.
His hands are around the woman’s neck and she appears to be riding
him. A man dressed in jeans, a black shirt, and black belt stands
in front of the women. His jeans are pulled down in the front with
his penis and testicles pulled freed. His penis is in the woman’s
mouth and from the position of his hands behind her head he appears
to be face fucking her. He wears a single gold band on his right
hand. A grassy area is visible in the background along with a white
wall covered in graffiti.

She had always been different from her friends when
it came to sex. She wanted it wilder although she could not put
words on exactly what it was she wanted. She just knew that guys
her age had never been able satisfy her sexual hunger.

He had asked her to meet in a big park in the city
center and to just wear a dress and shoes. No bra and no nickers.
She felt a tingle in her pussy as she got on the bus to go meet
him. The thin fabric caressing hard her nipples, calling unwanted
attention from other passengers. She felt vulnerable and exposed,
and her cunt was soaking wet even before she had arrived at her
destination.

As she saw him walk toward her she thought to
herself that this was a crazy idea, what the HELL was she doing?
But when he warmly greeted her and she heard his deep, calm voice,
she decided to let go of her fears and inhibitions. She decided to
do whatever he asked of her from this moment onwards...

Shaye is a stray puppy girl. When Sir R, her online
Dominant, arranges their first meet, she heads out of town excited
to see him, until her best friend decides to join her for the
weekend. Her comfort zone is threatened, but if she confronts her
fears of exhibition, she might just win the ultimate treat.

Adventure, by definition, was an activity of
hazardous sorts. Meeting Sir R with whom she'd exchanged online
debauchery for a weekend camping trip in the heat of the desert's
July sun, was hazardous.

First shift's work report completed, Shaye loaded a
tray with six more test tubes on the main hematology instrument.
While the probe sucked up the blood for testing, she checked the
time on the wall. Three thirty on a Friday afternoon. She was
running late. Where was he?

On her far left, the specimen processing staff
clicked keyboards and entered the last of the dayshift's
collections. Second shift phlebotomists swung through main
laboratory doors, coming from and to the hospital's floor calls. On
the right of the open lab space was the chemistry department, the
loudest sector of the lab. Seven gigantic instruments buzzed their
own tune in-between the stages of testing, their train like rails
carried and sampled thousands of tubes a day. She waved at the
second shift's chemistry coworker who pointed at her wrist. "Write
him up!"

Shaye moved away and walked the five steps to the
pale green workstation. She took a pen out of her hair and while
scribbling her initials on the shift report said, "Four need manual
counts, and one bone marrow is set up for Dr. Pascal on station
two. She'll be coming in soon. I left preliminary notes."

Frank rubbed hips with her. She sighed and changed
course, heading for the main microscope station. Dating a coworker
was a mistake she wouldn't repeat again. Their relationship ended
before Shaye decided to pursue an online chat group. It ended when
she told him she was kinky and at his insistence, showed him what
she liked. He laughed at her then but ever since she left him, he
pursued her with rather forceful interest.

He followed. "What's the rush eh?"

She glimpsed at her workplace. Most of the second
shift's staff had arrived. "I got places to be," she said softly,
weary of the others who pretended not to listen but heard
everything. "You're late again, please don't make a scene." With
ten percent bleach sprayed on the paper towel, she wiped the scope,
the workstation, and the phone receiver. She removed her latex
gloves and threw them in the bin then hurried to the wall to hang
her lab coat. She should've listened to her friend Dallas when he
told her Frank wasn't the guy for her.

Although Dallas didn't know about her bedroom
activities, he was right about Frank, and in the end, Shaye turned
to an online group. Munches in the area were scarce and even if she
found a gathering in the Coachella Valley, she wouldn't go. Crowds
made her uneasy. Kinky folks fast uncovered the dark side even when
one veiled it. Online, sheltered behind her computer, she typed
desires she'd have otherwise struggled to reveal.

Inside the employee lounge, at her metal locker, he
cornered her. "I Googled what you're into and I wanna try."

"I don't, but thank you. Good luck." Humiliation, as
a part of the scene, was one thing, making fun of her with a collar
on was another. She didn't forgive him, and his laughing at her and
calling her a “doggy" didn't ring like he’d Googled lifestyle at
all.

She turned and faced him. His pale blue eyes, once
serene, were now somehow darker. "One, you made me feel like a
freak and I regret telling you about my life, and two, we work
together. Three, you're late most of the time and I have to cover
for you. I just don't think you're ready to take on a...doggy."

Near her head, his palm pressed the locker. "I'm
sorry, I said I was sorry, what do you want from me? Jesus, you can
hold a grudge."

"I don't want anything from you apart from what we
have here. Have a good weekend."

He gripped her elbow when she tried to leave. "I
found you online."

"I know all about the chat rooms, the RPs, and other
shit you've been doing."

Shaye tugged her arm, swung open the door, and left
in the echo of his, all too familiar, laughter. Scents of cleaning
products hit her nose as she walked like a zombie through the maze
of cold, white basement hallways. In the parking garage, she sat in
her car and tapped the steering wheel. Frank was pushy at work and
he'd found her online. His efforts to get back together troubled
her. What would he say in the group? She picked up her phone and
opened Safari then saw the time on the screen. Damn. She didn't
have time to check and see if he posted anything.

Shaye inhaled the fresh gardenia scent, sprinkled by
the people at the car wash around the corner, in hopes the pleasant
smell swept away her worries. She tucked the phone between her
legs. The white scrubs didn’t look as sexy as the shorts and
t-shirt she wanted to wear to her big meet. From the locker, she'd
only grabbed her purse. Distracted by her ex, she'd forgotten her
outfit and a swimsuit.

In the trunk she had more clothes. Hand on the door
handle, she tapped it, thinking she should hurry and get on the
road. She drove out of the dark parking garage straight into the
blinding Palm Springs afternoon sun that rose high above the tall
palm trees lining the road. She scrambled for sunglasses on the
passenger's side visor. They covered half of her face. She took a
right onto Indian Canyon Drive.

On her way to the highway, air-conditioning to the
maximum, she turned on the rock radio station and jammed her way
out of thinking about her ex-boyfriend to her current interest, a
man in his forties who knew what he wanted and how to deliver it
precisely the way she liked. Sir R was stern, always on time
online, and he didn't make her feel like her kinks were anything
other than ordinary. Even if they were. She loved the way he
allowed her to just be herself and not worry about him judging
her.

Head bobbing to the rock music of her mother's
youth, thoughts somewhere between Sir R's balls, she took the
highway exit and read a few casino signs. "Jackpot at 108,000 and
counting! Winner, Winner!" they said.

She squinted her eyes and ducked to look out of the
passenger window.
Was that…? It was. Oh, hell
. Emergency
flashing lights on, she pulled over to the side and threw her hands
in the air.

A swimmer-slender, tall man wearing yellow, below
the knee swim shorts, tight bright green muscle shirt, and blue
flip flops, stuck his thumb out. He sashayed to the car, opened the
door, threw his backpack in the back, and plopped his ass in the
passenger seat. "Dayum, girl! It's like a furnace out there." He
adjusted the vent units to blow in his face.

Shaye gaped. "Wha..? Are you hitchhiking?"

"Waiting for you. An hour ago," he said and fastened
his seatbelt. "Cry me a river!" He turned up the radio.

Dallas was two years younger than her with dark
skin, shaved head, and big brown eyes. His most striking feature,
other than his hard eight pack, were his full lips that often
stretched into a smile. Just like now.

"What are you doing and where is Mystique?" Shaye
asked. Dallas was her check-in person, a back up to make sure
everything was going as it should with Sir R. He was also
dog-sitting for the weekend.