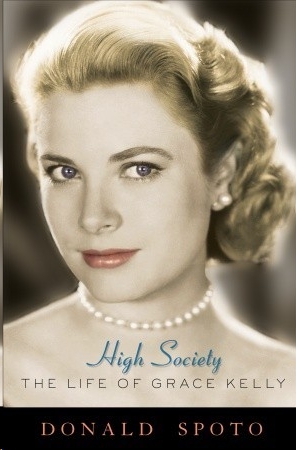 FOR MY SISTERS-IN-LAW
Lissi Andersen and Hanne M
ller
,
with great admiration and loving gratitude

M
Y MAJOR DEBT OF GRATITUDE IS TO
G
RACE
K
ELLY
G
RIMALDI
, Princess of Monaco, who granted interviews without which this book would not be possible.

Many of those who knew or collaborated with her are no longer with us, but I was able to discuss Grace with the following before or during research for several other books. I acknowledge, therefore, the late Jay Presson Allen, Peggy Ashcroft, Anne Baxter, Ingrid Bergman, Herbert Coleman, Joseph Cotten, Hume Cronyn, Cary Grant, Tom Helmore, Alfred Hitchcock, Evan Hunter, Stanley Kramer, Ernest Lehman, Simon Oakland, Gregory Peck, Peggy Robertson, James Stewart, Jessica Tandy, Samuel Taylor, Teresa Wright and Fred Zinnemann.

All of Grace’s directors, along with almost everyone who acted with her, are deceased. I am especially grateful, therefore, for the reminiscences of those actors and friends of Grace still available to supplement my interviews—among them, John Ericson, Rita Gam, Edward Meeks and Jacqueline Monsigny.

T
HANKS TO
G
ARY
B
ROWNING
, assistant visitor services manager at the Museum of Television and Radio, Beverly Hills, I was able to see many of Grace’s television appearances. Mark Gens and the staff of the Archive and Research Study Center at the University of California, Los Angeles, made additional kinescopes of her performances available to me.

As so often, I was welcomed and helped by the dedicated staff at the Margaret Herrick Library of the Academy of Motion Picture Arts and Sciences, Beverly Hills—in particular by Stacey Behlmer and Barbara Hall.

Tom Smith provided research assistance in England, and Jonathan Boone in the United States; I acknowledge their thoroughness and alacrity.

In 2007 the Forum Grimaldi, Monte-Carlo, mounted a tribute in dozens of rooms of its vast conference hall—a celebration of Grace’s life and career twenty-five years after her death. For the first time, Prince Albert and Princesses Caroline and Stéphanie made public some very important documents, letters and photos.

My friend the actress Diane Baker first introduced me to the prolific French writer Jacqueline Monsigny and her husband, the actor Edward Meeks. At Grace’s request, Jacqueline wrote and Edward costarred in Grace’s last film
—Rearranged
, which has remained unavailable to the public since its production not long before the death of the princess. Thanks to Jacqueline and Edward, I was able to see this remarkable movie several times and to treat it at length in this book. They were close friends of Grace for over twenty years, and my interviews with them have provided unique and valuable material.

Not for the first time, and surely not for the last, my brother-in-law John M

ller devoted his time and considerable talents to several important tasks in preparing this book for publication. Once again, I salute his artistic and technical gifts.

For various acts of kindness, I am grateful to John Darretta, Lewis Falb, Sue Jett, Irene Mahoney and Gerald Pinciss.

M
Y
N
EW
Y
ORK AGENT
, E
LAINE
M
ARKSON
, has been a devoted friend and trusted confidante for over thirty years. I am equally fortunate in the constant help and affectionate encouragement of her associates, Gary Johnson, Geri Thoma and Julia Kenny.

Elaine introduced me to the good people at the Harmony Books division of Random House, where my publisher is the highly respected and perceptive Shaye Areheart. Shaye and my superbly attentive and ever-vigilant editor, Julia Pastore, have offered warm support of me and my work. They have my great gratitude.

T
HIS BOOK IS DEDICATED TO
my sisters-in-law, Lissi Andersen and Hanne M

ller, who have been as devoted to me as they have been enthusiastic followers of my career. They and their husbands, S

ller, welcomed me with open arms from my first day in Denmark, where I am blessed to share my life with Lissi and Hanne’s brother, Ole Flemming Larsen. He watched Grace’s movies with me, he listened patiently to portions of the manuscript, and he provided pointed suggestions for its improvement. Ole’s artistic eye for detail and his amazing language proficiency are but a few of his many talents, and his commitment to me and to our life together means more than I can say. Grace, who always placed family first in her life, would have admired and loved Lissi, Hanne and Ole, as does …