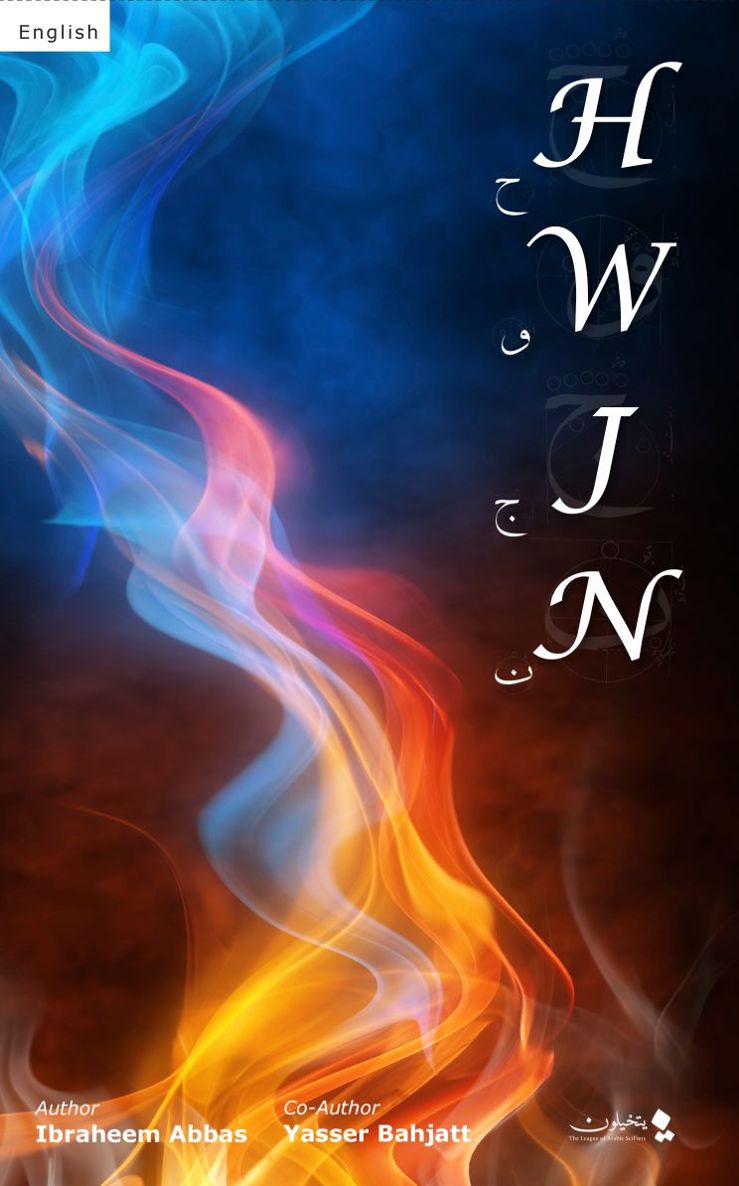 Ibraheem Abbas and Yasser Bahjatt are the
co-founders of Yatakhayaloon—The League of Arabic SciFiers.

Its objective is to establish the Arabian Science Fiction Genre, making it stand out as a unique and new view of Sci-Fi that would also expose the world to our rich Arabian culture.

We dedicate this novel to everyone who has ever felt that we are not alone, that there are other beings that live amongst us but we cannot see, feel, or hear them. One form of such beings
are called Jinn.

If you have ever felt like someone was watching you, or that things were happening that have had no explanation, we hope this novel would give you some insight into the world of Jinn and put you a little bit on edge…or maybe actually push you off of it.

I want to thank Ali
Sheneamer, who listened to my story way before I wrote it and kept bugging me until I did; I also thank Abdullah Alsalamah who stood up and said the truth stopping all rumors about this novel. Finally, I want to to thank Yasser Bahjatt, my comrade on this amazing journey.

I would like to thank Dr. Arlan Andrews Sr., who put me on the spot during his session in GCF2012,
forcing me to think seriously about the Arabian Science Fiction industry and how to help in its creation. I also thank Arthur Zards, who pushed me to pitch my sci-fi impact concept to TED, giving me a much-needed boost to move forward with Yatakhayaloon. Last but not least, I would like to thank TED’s Open Translation Project for the translation experience I had built through the program, as it was the first platform where I published my translation work. This experience was was essential for me to now be able to co-author this novel.

This tale was born of another tale… that is no less crazy. A tale that could not fit onto these paper pages but is engraved on the walls of our lives and hearts. It is the tale of an angelic spirit inhabiting a nymph’s body and living amongst us, thinking she was Human.

I lived a routine life until I met her. She awakened within me everything I am today. Because of her I got to know myself, and here I am—still trying to paint my emotions for her with every letter I write…

Every letter echoes with an eternal tone of affection.

This is all for you…

This is all because of your love…

Our Home Is Haunted…

A young man in my early nineties.

I will tell you my story…

My story did not really start until a few years ago with Sawsan … the Human.

You know what? I prefer not to talk with those who imagine me as a one-eyed monster with horns and goat legs. We, Jinn, always laugh hysterically when we see those traditional, naïve monster images you create of us. If you think you’ve never heard of us before, I assure you that you have. You surely have heard of one of the most powerful Jinn: Lucifer. Yes Lucifer is a Jinni, all the devils are Jinn, and Lucifer is their Master. Most believers refer to him simply as “The Damned.”

You look surprised… or maybe now you think of me as a devil… this is one of your shortcomings as Humans. By that, I mean, stereotyping.

Hitler was one of you Humans but you never see us saying that all of you dream of world domination or have ethnic superiority issues. By the same vein, not all Jinn are devils. The followers of Lucifer are, but there are other Jinn, like the Nafar, who follow the word of Allah. We also have classes of Jinn
based on our powers, like Efreets and Marids.

For now, please forget about all that. Who I am, what species or what origin… what
matters is that you hear my story and understand my feelings.

Yes, I see curiosity in your eyes. I know, I look very normal, just like any Jinni, although my mother sometimes exaggerates in pampering me and when describing my handsomeness, as I am her only son. I am sure you would reject the idea were I to tell you that we do not differ much from you. Do not ask me for details, as we have failed to introduce our selves to your imagination:

We are just like you: we eat, drink, sleep, feel happy and sad, get married, and have children, and…most of all, we love! Do we not live in this world with you as intelligent, responsible creatures? Do we not worship Allah and follow his messengers also like you? So why then would you imagine our world with this amusing, shallow view?

Let us get back to my story… Sawsan—that is one of your names; I had never really noticed it until I met her. It was also the name of the flower in the small garden she maintained on her windowsill. I was addicted to its scent from the small flower garden that she maintains on her window. Before I go on, allow me to chat about some prior events…

After I finished my studies with high recognition, I joined one of the largest therapy houses—a medical center, as you say—as an intern, then moved up to become a full-time employee with a nice salary. At that point my mother started her daily nagging, which she still repeats every time she sees me:

“Hawjan, Jane is good for you… Hawjan, I found you a very beautiful girl… Hawjan, Jeanette is amazing.”

When she comes at me this way, I gently change the subject, as I do not want to get married the traditional way—that is, I have no desire to choose between the tens of nominees. I know if my father were still alive he would settle this discussion for one of his nieces—, I think for Jumara specifically, the daughter of my elder uncle Santool. However, to me, that is impossible!

All my uncles are so deep into sorcery and black
magic, they have signed contracts with the largest coalition of Marids and Human successors. Heaven forbid I ever follow their path! My father, may Allah bless his soul, was the only one of his brothers who refused to work in the service of sorcerers even though it would have made him many times what he earned at his simple job, which barely fed my mother and me. He also chose to marry my mother, who is a descendant of the Jinn that met Prophet Mohammad, peace be upon him, and heard the Quran from him. This group is known amongst Jinn as the Nafar; they are known for their high moral and ethical codes, which are contrary to my father’s family. So it was only logical that my mother and her father would raise me after my father’s death.

We are humanitarian Jinn, meaning we live in and adapt to Human societies—unlike most Jinn gatherings, which are annoyed by proximity to Humans and prefer living in their own colonies, away from Human cities and houses. Ever since I was born, I lived in this spot on the coast of the Red Sea around ten kilometers north of one of your cities: Jeddah. As your city expanded by filling in the sea, it occupied most of our village. Many of my neighbors moved because of that, but we stayed along with some others. Five years ago, you Humans started one of your huge development projects, and within a few short months the land around us had turned into a collection of scattered villas. We lived in one that remained unsold for more than two years, during which my exposure to your kind increased. Before then, I had not interacted with Humans as my curiosity had never pushed me to. I would, however, cross your city every day to get to work.

It never bothered me to be in that house. On the contrary, I quite enjoyed it. We set up the rooftop for my sick grandfather; I lived in one of the rooms; and my mother spent most of her time taking care of her father and praying under the staircase.

That was until one day when I came back from work and saw two cars parked in front of the villa. That meant one thing: the house was now haunted. Humans were moving in! I quickly toured the place and found my mother under the staircase, crying about her bad luck. I tried to calm her:

“Don’t cry,” I said. “Tomorrow we will prepare ourselves and leave. We’ll go to Ananoh or Hindabah. I’ve saved some cash and—”

“Don’t you dare say it!” she wailed. “I will never leave this place! I will never leave your father’s scent. I will not die away from the place where we lived in together!
And what about your grandfather? He is sick and will not live through the move.”

I knew there was no room for discussion—not with her tears and her memories of my father. So I dried her eyes and said jokingly, “Why would these Humans bother us? We keep to ourselves. And anyway, we should not judge them before we see their manners. They might turn out to be peaceful humans who fear God”

My words did help to calm her down somewhat, so I went on: “Let me go check them out.”

The buyer of the house, Dr. Abdulraheem Saeed, was a self-made scholar with gray streaks in his hair and beard. They added to his poise. His wife, Mrs. Raja Maghrabi, had a Master of Science in Education and managed a High School. Their young son, Hattan, was about to finish High School, and their daughter…well, that was Sawsan.

A student in medical school, Sawsan was driven to realize her parents’ dreams. She always strived to be the best at school and maintain a perfect GPA, which was a rarity in medical school, especially in the finals years. She was a very serious young woman, and she turned into a shy kitten when she interacted with people. One would almost think she was a nine-year-old kid with her innocent smile and red cheeks. Sawsan tended to avoid mingling with her peers and spent most of her time with her books or her family, or alone with the flowers she grew in a small garden on her windowsill.

Watching Dr. Abdulraheem as he stood outside our small villa, I could see he had fulfilled a lifelong dream by purchasing it. Before then he had spent two decades of his life in a small apartment, paying rent and saving every penny for his dream house. His eyes now drifted over that villa, his mind torn between happiness and amazement that a man of his stature, with the highest academic achievements and a job as one of the main decision makers in the Ministry of Health, had to go through so much to own such a small home. It really in no way lived up to his dream home.

“Daddy… Daddy, I like this room!” Sawsan brought him back to reality as she pointed to the last room in the corridor—my room, previously. Before I even realized it, everyone was in there along with Sawsan.

“My desk will be here, my bed there, and here I will plant my flowers.”

Sawsan was so excited, and that rubbed off on everyone…except me. I watched them as they left, and understood, from Dr.
Abdulraheem’s conversation with the real estate agent, that in less than two weeks they would be moving in.