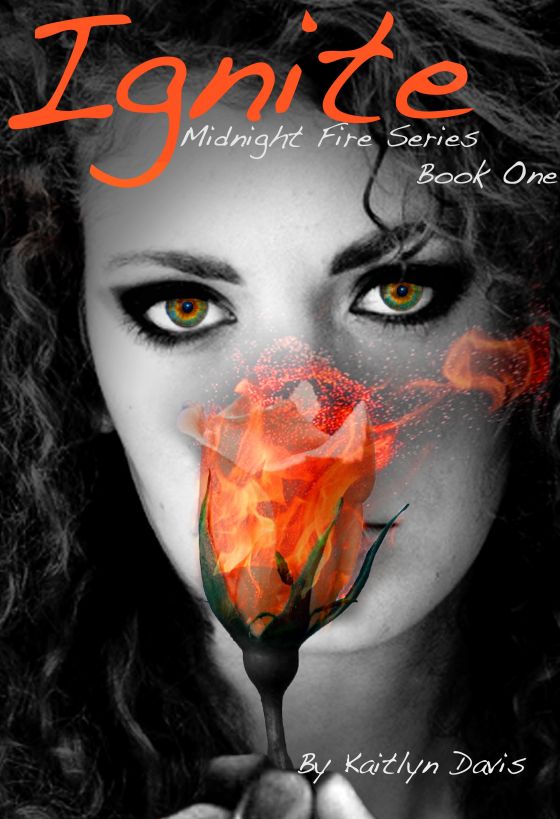 The right of Kaitlyn Davis to be identified as the
author of this work has been asserted in accordance with the
Copyright, Designs and Patents Act 1988

This eBook is copyright material and must not be
copied, reproduced, transferred, distributed, leased, licensed or
publicly performed or used in any way except as specifically
permitted in writing by the author, as allowed under the terms and
conditions under which it was purchased or as strictly permitted by
applicable copyright law. Any unauthorized distribution or use of
this text may be direct infringement of the author's rights and
those responsible may be liable in law accordingly.

This is a work of fiction and any resemblances
between the characters and persons living or dead is purely
coincidental.

Other Titles by Kaitlyn Davis

To my family for their unconditional love,

my friends for their overwhelming support,

and my fans for their incredible enthusiasm.

Thank you from the bottom of my heart.

Kira watched as he languidly stood up,
flexing his muscles as though he had just awakened from a long
dream. He stretched his arms over his head and cracked the bones in
his neck before finally settling his gaze on her. She hardly
recognized him, the boy she had fallen in love with. Where minutes
before there had been light and emotion in his eyes, there was only
a black hole, a seemingly endless abyss. Kira had never seen him
look at her that way, like less than food, like vermin, even since
the first time they had met.

"Aren’t you going to run?" He asked with
sinister humor coloring his words. The smirk on his face may as
well have been a knife cutting through her heart. The darkness had
always called him, but Kira had always thought that being with her
would be enough to keep him from crossing over. She saw now that he
had surrendered to his nature and for the first time she felt real
fear when he looked at her.

Kira stepped backwards on shaky feet, trying
to digest the question. She didn’t have an answer. How could she
turn her back on him and run away? The man she loved was trying to
kill her. There were no options. Could she forget it all—all the
nights they had shared kissing and swapping secrets—and fight to
kill? Or, would she run and admit that there was no hope that he
would return to her?

Kira said his name and reached out her hand,
searching one last time for the man she had lost.

"Yes, honey." The word hit her like a slap in
the face as it rolled off of his tongue drenched in sarcasm.

Kira looked up at the sun, still hidden
behind the shadow of the moon, and sprinted into the tree line
behind her. She couldn’t give up on him now. But, when the eclipse
was over, maybe she would finally find the strength to fight.

As Kira waited in line for a parking spot,
she studied the sprawling two-story building that took up her
entire line of vision. It was decorated with the words "Charleston
County High School" and graffiti covered brick, with a layout much
different than the one of the private school she had attended in
New York with numerous buildings spread over a few city blocks and
sandwiched in between larger corporate ones. And, the students
wandered here at a pace much different than the bustle she had
grown used to during the past five years spent at the boarding
school she had begged her parents to attend. But last year her
father had been laid off and Kira knew she would be back home for
her senior year.

Her family had lived in Charleston for about
four years, but Kira had never met anyone during her summers home.
This would be new for her, a huge school that she would definitely
get lost in and tons of people who had probably never even heard of
‘The Met.’

A car honked behind her and Kira continued
moving at a slow pace down the parking lot as students took turns
swinging trucks into super-sized, yellow lined spaces. As she took
her turn pulling the eco-friendly car her parents loved into a
spot, she knew she wouldn’t quite fit in here. Kira looked to her
left at the person sitting in the passenger seat of a pickup truck,
a full two feet above her, and felt as tiny and invisible as she
probably seemed to him. But enough, she shook herself; she hated
self-pity more than anything. Kira grabbed her shoulder bag and
made for the front door with the rest of the crowd. She did give
Charleston one thing, the smell of marsh and pine was a heck of a
lot better than that of car exhaust and garbage.

"Name?" the secretary asked as Kira entered
the main office for her schedule.

"Senior." Kira ran her hands down the sides
of her royal blue sundress, smoothing out the wrinkles to make a
good impression on her new classmates.

She took the folder and pulled out a
schedule. Advanced Calculus Room 253C. Kira walked out to the
hallway and looked around for a sign, anything to point her in the
right direction, but saw only bare brick walls. After a few
minutes, someone finally took pity on her.

"Are you new?" A handsome blond guy with a
lanky build stood behind her looking over her shoulder at the
paper. "Oh, 253C, not an easy walk from here. Come on, I’m next
door to you." She followed, having no real other choice. "So you
are new, right, or have my great looks made you speechless?" Damn,
she hated being called out.

"Yeah I’m new, and what good looks? You’re so
tall I can’t even see your face."

"Touché." He studied her for a moment and
Kira finally got a good look at his face, which she had to admit
wasn’t too shabby. He had wispy hair the color of summer corn, a
slightly crooked nose spotted with light brown freckles, and a
wide, friendly smile full of perfectly white teeth. There was
something about his eyes, green with flecks of yellow, which she
found familiar and almost comforting. "I’m Luke Bowrey," he
extended his hand, naturally tanned from a summer in the south, and
she shook it.

"Kira Dawson. Nice to meet you, and thanks
for the help."

"Not a problem. When I see a damsel in
distress I just can’t help but act the knight in shining armor."
She laughed despite herself. Kira knew he was cocky but she also
instantly knew they could be friends.

"Here’s your stop. Hope to see you later," he
said and rushed into the classroom next-door right as the bell
rang. She hurried to do the same, and sat quickly in the first seat
she could find. The math was easier than she was used to, as were
chemistry, biology and Spanish. Her morning went smoothly as she
followed people from classroom to classroom and eventually into the
cafeteria big enough to hold all 1500 students at the school.

Kira had packed her lunch, so she made her
way down the rows of tables, searching for an open seat in a
friendly crowd, almost giving up until a huge hand landed on her
shoulder.

"Need saving again?" She smiled to herself;
it was Luke coming to the rescue once more.

"I wouldn’t mind it." He nodded to the left
and she followed him to one of the smaller tables where two boys
and another girl sat. "Everyone, this is Kira. Kira, this is
everyone." She noticed the girl roll her eyes.

"Luke, truly amazing introduction," a
slightly goofy looking boy with shaggy brown hair and black rimmed
glasses said, and extended his hand. "Hey Kira, I’m Miles, this is
Emma and that’s Dave." He pointed to the girl—who had dyed blonde
hair, more makeup on than Kira was capable of applying and was
wearing Lily Pulitzer—and the boy—who had one tanned arm around her
chair back and was sporting a baseball cap for the Dallas Cowboys.
"We all moved here last winter, but thanks to you we’re no longer
the new kids. Not much change happens here. I think five students
in one year must be a school record."

"Wow, so everyone is pretty set in their ways
then? Good thing I found you guys, or good thing I looked lost
enough that Luke felt some pity for me." Kira adjusted her own
curly red hued hair, slightly nervous in front of this new
crowd.

"We would have found you eventually," Emma
added, "We’re some of the only kids not here since birth and
probably the only ones not here since middle school, so it was
almost inevitable that we’d adopt the new kid and not upset the
balance."

"The balance?" Kira asked, a little confused.
Her school in New York had been a constantly changing atmosphere
with girls dressed in anything from Gucci to Forever 21 to leggings
with holes in them from a flea market.

"It’s like this," Luke put an arm around
Kira’s shoulder and steered her to the left side of the large, open
room. "First, the cafeteria is divided into four with freshman in
the front near the grotesque processed food smell and older kids
filling in the back until you get to the seniors around us who have
the best window view out to the lake and the biggest tables. Then,
each year is divided into your standard groups. The jocks have a
table," he pointed to the corner that was a sea of blue jerseys
full of boys and girls in uniform. "Next are the football players
and the cheerleaders who fawn on them, the next table over is the
just plain popular because of good looks and in rare cases a
stellar attitude. In the middle are the average uncategorized and
the most down to earth people you’ll meet. And finally, rounding
out the senior class we have the drama nerds mixed with the emos,
because who really can tell the difference there." She stared at
the groups, sort of seeing the distinction in clothes and stature,
black leotard looking garments versus regular jeans and a t-shirt
or pompoms, but not totally understanding it. She wasn’t used to
groups, except for rich and scholarship, which had been the only
divide at her private school. But even then it was sometimes hard
to tell just from looks, because the wealthiest students would come
to school wearing oversized sweaters with moth holes and the
poorest student might spend a month’s income on one dress.

"Luke, you forgot the misfits." Miles added,
his head turned out the window.

"Meaning us?" Kira asked, certainly feeling
like this motley little group didn’t fit into any of the categories
Luke had mentioned.

"Nah, we’re still the newbies, those are the
misfits. Don’t know how I forgot." Luke turned Kira towards the
window at the tables outside where four students, three boys and a
girl, were lounging—all pale despite their position in the sun.
"They sort of keep to themselves."

"Don’t know. I don’t really know anything
about them actually." Kira thought Luke was holding something back,
but she had only known him for three hours and didn't want to
accuse him of lying, especially after all he had done. She looked
outside for a moment longer, and even through the glass she could
tell there was something different about them. It was more than the
distinction between a jock and a drama nerd. It was something
almost tangible, but whatever it was, she wasn’t going to harp on
it now. She had friends to make.

"So, where are you guys all from?" Kira asked
while sliding into one of the open chairs circling the table.

Dave just pointed to his hat. Kira guessed he
was the silent type.