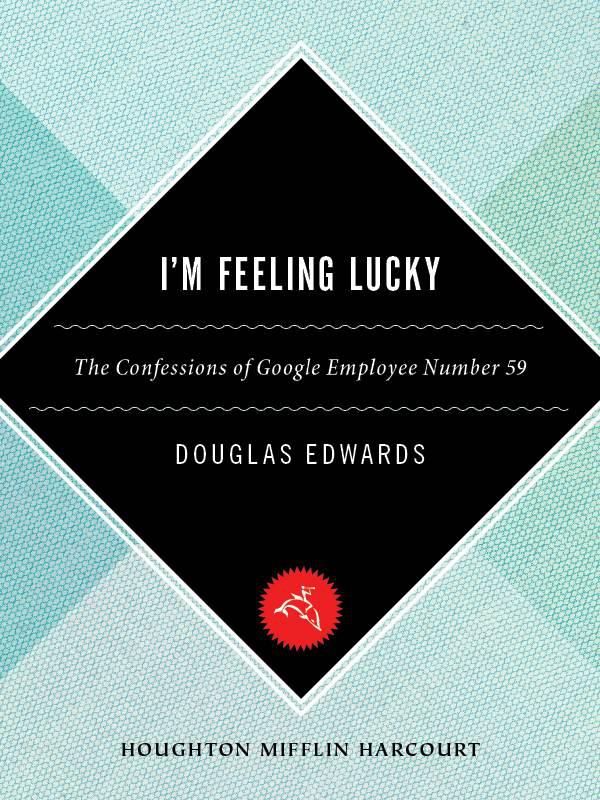 The Confessions of Google Employee Number 59

All of the author's profits from the sale of this book will be donated to charity.

To Kristen, without whom the journey would have been
impossible and the destination meaningless.

Nothing to tell now. Let the words be yours, I'm done with mine.

PART I: YOU ARE ONE OF US

6.
Real Integrity and Thoughts about God
[>]

7.
A Healthy Appetite for Insecurity
[>]

PART III: WHERE WE STAND

18.
Mail Enhancement and Speaking in Tongues
[>]

PART IV: CAN THIS REALLY BE THE END?

L
ARRY PAGE IS
an intense guy. At least he was in 1999 when I first began working for the company he co-founded with Sergey Brin.

Whenever I found myself in a room with Larry, I felt an urgent need to do more, as though every second in which I wasn't communicating vital information was a waste of his bandwidth.

One day in 2002, I ended up alone with Larry in his office after a long and protracted battle over some policy or other. I had fought and I had lost, and I had come to opine on what I had learned and to extend an olive branch across what had been a turbulent time. Larry, dressed in casual shades of gray, peered intently at his screen. Or rather, at his two oversized adjacent monitors, filled with code and open web browser windows. Sergey, with whom he shared the office, was not on hand. Disassembled in-line skates, a crumpled hockey jersey, and a Japanese geisha doll kept watch over his empty chair.

"Larry," I began, "I know I haven't always agreed with the direction you and Sergey have set for us. But I've been thinking about it and I just wanted to tell you that, in looking back, I realize that more often than not you've been right about things. I feel like I'm learning a lot and I appreciate your patience as I go through that process."

I smiled inwardly. It was a well-framed corporate kiss-up. I'd humbled myself and given Larry an opportunity to analyze my strengths as a member of Google's management team and to reward me with comforting words and reassurances about the value I added. Now he would recount those occasions when my counsel had been sage and congratulate me on my perspicacity. I envisioned us engaging in the non-physical equivalent of a man hug before I trundled off to savor the moment with a freshly made cappuccino in the micro-kitchen. That's how you "manage up" in a large corporation.

Larry looked at me with the same stare he had directed at the code on his screen, as if he were trying to decipher some undigested bit of an equation that refused to resolve itself.

"More often than not?" he asked me. "When were we
ever
wrong?"

He didn't smile as he asked his question or arch an eyebrow to signify annoyance. He simply wanted to know when he had been wrong so he could feed that information into the algorithm that ran his model of the universe. If he had made a mistake, he needed to know the specifics so he could factor that into the next iteration of the problem if it reappeared.

"Oh. That's right," I thought, awakening from my reverie. "I don't work at a large corporation anymore. I work at Google."

At least, you know what Google does. It finds stuff on the Internet. That's as much as I knew when I joined the company in 1999. I didn't know what a web indexer, a pageranker, or a spidering robot was. I didn't know how dogmatic engineers could be. I didn't know how many Internet executives could squeeze into a hot tub or how it felt to "earn" more in one day than I had in thirty years of hard work. I didn't know then, but I do now.

True, my story is one of rare opportunity and fortuitous timing, but not entirely so.

This book tells how it felt to be subjected to the g-force of a corporate ascent without precedent, to find myself in an environment where old rules didn't apply and where relying on what I knew to be true almost got me fired. It's not a complete history of everything Google did between 1999 and 2005, nor a completely objective retelling of Google's greatest hits. I wrote the official history of Google during that period and inscribed it on the company's website.
*
Most accounts since have merely embellished it, and I don't intend to cover all that old ground again. Instead I'll give my insider's view of how things worked (and didn't work) and how we changed as individuals and as a corporate entity.

This book won't delve deeply into Google's current imbroglios over censorship, regulation, and monopoly. I include only what happened between my first day in 1999 and the day I left in 2005. We weren't yet worried about network neutrality, street-view data gathering, or offshore wind farms. Our big issues barely grazed the electrified moral fence of our "Don't be evil" credo: develop the best search technology, sell lots of ads, avoid getting killed by Microsoft.

While this story is told from a marketer's perspective and my title came to encompass "consumer brand management," this book is not just about marketing. I don't claim to have "built" Google's brand. The brand was built on the product, and the product was built by engineers—computer scientists who constructed systems as complex as any that ever launched a rocket into space, but powering instead a small rectangular search box that now appears in every corner of the Internet.

I'll describe the work habits that enabled them to accomplish a great deal in a short time and the shortcomings that developed in a company where every problem was viewed as solvable and every situation as reducible to a set of data points; where knowing you were right meant nothing should, could, or would stand in your way.

And I'll show how a company with a vision of providing access to all the world's information sometimes mishandled its own relationship with openness, honesty, and disclosure in ways that arose organically and inevitably from the attitudes of those in charge.

To start, I'll give you the background I wish someone had given me on my first day at Google, so you can appreciate the chaos without getting lost in it yourself.

Let's begin with a quick sketch of the company's founding. Google started as a joint research project by Larry and Sergey in 1996, when they were graduate students at Stanford. They based their project on a new approach to search technology that Larry named PageRank in honor of himself and because, well, it ranked web pages according to their importance.
*
Their algorithm took into account all the hyperlinks pointing to a given web page from other websites, as if by linking to a page those other sites were declaring it worthy of attention. Most search engines just looked at the content of the pages themselves and based their results on how often the searched-for word appeared on them. It was the difference between judging a stranger by his looks and gathering opinions from everyone who knew him. Because Larry and Sergey's technology analyzed what was going on behind the scenes, they called their search engine "BackRub." For a while, a photo of Larry's hand caressing a bare shoulder was their logo, but even after they airbrushed out the dark hairs, it looked like a shot from a low- budget porn flick.

Big Wheat by Richard A. Thompson
Maggie on the Bounty by Kate Danley
Home through the Dark by Anthea Fraser
Bug Eyed Monsters by Jean Ure
Julie Anne Long by The Runaway Duke
Cameron's Control by Vanessa Fewings
A Natural History of Hell: Stories by Jeffrey Ford
Refugees from the Righteous Horde (Toxic World Book 2) by Sean McLachlan
Bared to Him by Cartwright, Sierra
A World Lit Only by Fire by William Manchester