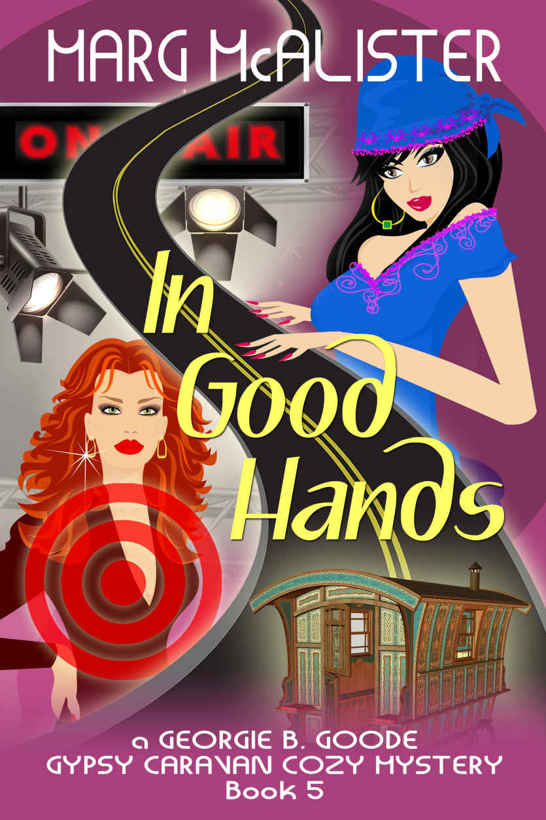 Get Your Free Book!

It’s a very a reluctant Georgie that finds herself back in Elkhart to take part in a cable TV special starring the Goode family and their huge family business.

There’s not much room for a film crew in a vintage trailer, especially when you add a bossy presenter like Jaxx Saxby. Actually, ‘bossy’ is probably being kind. A few other words fit Jaxx too, like ‘patronising’, ‘rude’ and ‘arrogant’; as she keeps insisting that they’re in good hands and they should just keep their opinions to themselves and listen to her.

Unfortunately, during a crystal ball reading recorded on camera, Georgie realizes that Jaxx is in grave danger —but where that threat is coming from is   not easy to work out, since most people around Jaxx Saxby have good reason to dislike her! Bad luck seems to follow her around.

Georgie and her team get to work following the clues to unmask the stalker, racing against time as the film shoot draws to a close. The problems escalate, and it’s soon clear that Jaxx is not the only target. As tempers wear thin and Jaxx becomes ever more impossible, Georgie has to rise to the challenge to discover the truth — before Jaxx suffers an accident from which there’s no coming back!

EBooks are not transferable. All Rights are reserved. No part of this book may be used or reproduced in any manner without permission, except in the case of brief quotations embodied in critical articles and reviews. The unauthorized reproduction or distribution of this copyrighted work is illegal. No part of this book may be scanned, uploaded or distributed via the Internet or any other means, electronic or print, without the author’s permission.

This book is a work of fiction. The names, characters, places and incidents are products of the writer’s imagination or have been used fictitiously and are not to be construed as real. Any resemblance to persons, living or dead, actual events, locale or organizations is entirely coincidental.

Get Your Free Book!

Whether she wanted to believe it or not, from birth Georgie was destined to follow in Great-Grandma Rosa’s footsteps—as well as inherit her crystal ball! Here’s your chance to find out more about the crabby old lady that Georgie sees as a kind of taciturn genie.

Visit my website below to get your complimentary copy of “Fortune’s Wheel”.

In order of publication

Release Dates for future titles can be viewed
here
on Georgie’s website.

Jaxx Saxby frowned at Georgie and shook an admonishing finger back and forth in front of her nose. “Don’t look at the camera. Look at me.”

“Oh. Sorry.” Georgie forced a smile, and wondered whether it was too late to change her mind. She fought down a wild urge to jump up from the seat, hurtle down the steps of her gypsy caravan and keep going.

It was very much too late: her father had not only agreed to this cable TV special about his gargantuan Johnny B. Goode RV Empire, he was more enthusiastic than he’d been about anything
ever
. From the moment Jaxx Saxby had sashayed into his office and said “We’d like to feature you on our cable TV show “From Little Things” - you’ve heard of it, of course?” he was putty in her hands. He’d not only heard of the show that traced the growth of successful businesses from humble beginnings, he had often commented that
his
business deserved to be on it.

Now Johnny B. Goode had checked off something else on his bucket list, and at the tail end of the shoot, it was finally Georgie’s turn to be interviewed. So here she was, stuck with one of the most annoying people she had ever met, being forced to perform for the cameras.

If she bolted, Georgie was sure that Jaxx would chase right after her – or, more likely, bark an imperious command to her producer, Lilli Chin Lee, and send
her
in hot pursuit.

She cast an eye at the crystal ball, hidden under its black velvet cloth, waiting to be unveiled. Another surge of panic hit. What if it didn’t work while the cameras were on her? What if she looked like a complete fraud?

Lilli leaned forward from where she was propped against the cooktop opposite the table and pointed at the pink pig next to Georgie’s elbow. “What’s that? Can we move it? It doesn’t really add to the atmosphere.”

“It’s my donation piggy bank.” Feeling the color rising in her cheeks, Georgie grabbed the pig and passed it to the producer.

Lilli tilted the pig and read the note stuck to its belly. “‘
Donations to Red Cross’.
What, you mean you do readings for
free
?”

“Yes. Well, just a donation, but how much is up to the customer.”

“Then how do you make any money?”

“I don’t.” Feeling hunted, Georgie looked around for help, but her gypsy caravan was filled with strangers and cameras and cables. No friends in sight: Layla and Tammy were outside waiting to be debriefed after it was all over.

“There could be an angle in that,” Lilli said to Jaxx. “Ask the question in the interview.”

“No, please don’t.” The last thing Georgie wanted to do was launch into an explanation of why and how she had started asking for donations instead of charging for a consultation—which was mostly because she didn’t want to be labeled a shyster. “It’s a personal thing.”

“Hmm.” Jaxx pursed her lips. “Oh well, I suppose you don’t want a stream of freeloaders all turning up to have their fortunes read.”

“It’s not that. I don’t do a lot of it.” Georgie changed the subject. “So, what are we going to talk about?”

Jaxx waved a languid hand at her producer. “Lilli? Do you have the questions prepared?”

“Don’t I always?” Lilli said sweetly, but Georgie didn’t miss the brief flash of irritation in her eyes.

“Of course.” Lilli exchanged a look with Seth, the cameraman, who was standing next to her peering through the lens. They didn’t actually roll their eyes, but Georgie could feel it.

The cameraman adjusted his headphones. “Sound check. You first, Jaxx.”

“Testing, testing, one two three,” she said in a bored voice. “I’m interviewing, um,” she paused to glance at the paper in front of her, “Georgie, gypsy fortune-teller, daughter of Johnny B. Goode.”

Great. An interviewer who couldn’t even remember her name.

“That’s fine.” The cameraman gave a thumbs-up. “Now you, Georgie.”

“Testing one two three,” she said obligingly. “Being interviewed by, um,” she drummed her fingers on the table as though trying to remember, “Jaxx Saxby.”

It all went completely over Jaxx’s head, but Lilli bit back a smile.

“Are we all ready, then?” Jaxx took a deep breath and flipped out the ends of her hair before addressing Georgie. “You don’t need to worry if you fluff a line. Seth can do as many takes as necessary.”

“Having said that,” Lilli put in, “the fewer takes we need, the better.”

Nervousness curled in Georgie’s stomach. This was all completely alien to her usual quiet environment, with a gently flickering candle in the background. Today she was trying not to squint into the glare of the portable lights.

“I usually light a candle,” she said. “But it wouldn’t have any effect with all these lights.”

“We can do fill-ins later,” Seth told her. “Different angles, close-up shots, that kind of thing. Ready to begin?”

“Got them here,” Lilli said, holding up a sheaf of paper. She picked one to hold up and set the others down on the cooktop, and stood to one side of Georgie, out of view of the camera but where Jaxx could see her prompts. “Start with the usual intro.”

Georgie turned slightly to read it. It said:

“Georgie! Look at
me,
remember?
”
Jaxx said sharply. “Not Lilli. Not the camera. They’re not
there
, all right?”

Jaxx beamed at the camera, waited a beat, and then said brightly: “You might think that an RV business is all about motorhomes, trailers and fifth wheels, but that’s not the case with Johnny. B. Goode’s family. His daughter, Georgie, has followed a different path. She has taken to the road in a colorful gypsy trailer and earns a living telling fortunes with her grandma Rosa’s crystal ball. We’re going to…”

Georgie held up a hand. “Wait—sorry, but that’s not quite right. I don’t actually earn a living through telling fortunes, remember. And it’s my
great
grandmother, not my grandmother.”

Just A Kiss: (The Frog Prince) (Tangled Tales Series Book 2) by Rose, Elizabeth
Flirting in Traffic by Beth Kery
Damiano by R. A. MacAvoy
You Can't Run From Love by Kate Snowdon
The Ministry of Guidance Invites You to Not Stay: An American Family in Iran by Hooman Majd
Harvest of Blessings by Charlotte Hubbard
Unlaced by the Outlaw (Secrets in Silk) by Michelle Willingham
Remains Silent by Michael Baden, Linda Kenney
Burning Up by Angela Knight, Nalini Singh, Virginia Kantra, Meljean Brook
Konrath, Joe - Dirty Martini by J.A. Konrath