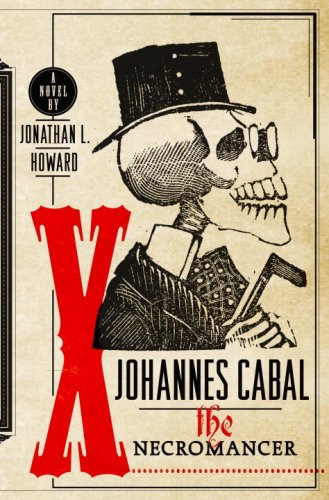 For Noel and Enid Howard

IN WHICH A SCIENTIST VISITS HELL AND A DEAL IS STRUCK

Walpurgisnacht, the Hexennacht. The last night of April. The night of witches, when evil walks abroad.

He stood at a desolate and lonely place where there would be no interruption, no prying eyes. The air smelled metallic with freshly spilt blood; the body of a decapitated virgin kid goat lay nearby. He had no alloyed metal about him but for a thin-bladed sword of fine steel he held in his right hand; that arm was naked, his shirt sleeve rolled up to the biceps. A silver coin wrapped in paper nestled in his waistcoat pocket. Before him burned a fire of white wood.

His name was Johannes Cabal, and he was summoning a demon.

“… Oarios! Almoazin! Arios! Membrot!” The chanted names faded into the unusually still night air. Only the crackling of the fire accompanied him. “Janna! Etitnamus! Zariatnatmix … and so on.” He drew a deep breath and sighed, bored with the ritual. “A. E. A. J. A. T. M. O …”

There was hidden meaning in the names he must call, the letters he must chant. That didn’t mean he had to approve or even be impressed by them. As he recited the Grand Conjuration, he thought that some magicians might have better served the world by writing crossword puzzles.

Then space distorted, and he was no longer alone.

The demon’s name was Lucifuge Rofocale. He stood a little taller than Cabal’s six feet, but the bizarre fool’s cap he wore—three flopping horns, or perhaps tentacles, ending with arrowheads—made his height vary from moment to moment. In one hand he held a bag containing, at least symbolically, the riches of the world. In the other, a golden hoop. He wore a segmented, studded leather skirt rather like a Roman soldier’s. Beneath it, fur-covered legs ended in hooves. He had a fat anteater’s tail, and a silly little Hercule Poirot moustache. As is often the case with demons, Lucifuge looked like an anatomical game of Consequences.

“Lo!” cried the demon. “I am here! What dost thou seek of me? Why dost thou disturb my repose? Smite me no more with that dread rod!” He looked at Cabal. “Where’s your dread rod?”

“I left it at home,” replied Cabal. “Didn’t think I really needed it.”

“You can’t summon me without a dread rod!” said Lucifuge, appalled.

“Well, yes, but under false pretences. You haven’t got a goatskin or two vervain crowns or two candles of virgin wax made by a virgin girl and duly blessed. Have you got the stone called Ematille?”

“I don’t even know what Ematille is.”

Neither did the demon. He dropped the subject and moved on. “Four nails from the coffin of a dead child?”

“Half a bottle of brandy?”

“I have a hip flask,” said Cabal, and threw it to him. The demon caught it and took a dram.

“Cheers,” said Lucifuge, and threw it back. They regarded each other for a long moment. “This really is a shambles,” the demon added finally. “What did you summon me for, anyway?”

The Gates of Hell are an impressive structure. A great adamantine finger of rock a mile in diameter and two miles high punches through the surface of the cracked and baking desert plain of Limbo. On one side of this impenetrable edifice are the Gates themselves: massive iron constructions hundreds of feet wide and a thousand high. Their rough, barely worked surfaces are pocked and pitted with great bolts driven through in ragged lines, huge bands of brass running across in uneven ranks. One could be forgiven for thinking Hell’s a popular place to get into.

Perhaps surprisingly, it is.

On the outside, one wonders what happens once you pass through that terrible, cruel portal. Some believe that all Hell is somehow crammed within the rock, a place where dimensions mean nothing. Others say that immediately beyond the Gates, within the hollowed rock, is a great chasm that opens into the pit of Hell, and that those stepping within must surely plunge straight to their eternal dooms. Others believe that the rock conceals the top of a very big escalator. Nobody on the outside knows for sure, but everyone wants to find out, and they want to find out because anything—anything—is better than the forms.

Lots of forms. Stacks of forms. An average of nine thousand, seven hundred, and forty-seven of them were required to gain entrance to Hell. The largest form ran to fifteen thousand, four hundred, and ninety-seven questions. The shortest to just five, but five of such subtle phraseology, labyrinthine grammar, and malicious ambiguity that, released into the mortal world, they would certainly have formed the basis of a new religion or, at the least, a management course.

This, then, was the first torment of Hell, as engineered by the soul of a bank clerk.

Nobody had to fill in the forms, of course. But, given that the alternative was eternity spent naked in an endless desert that has never known night, most people found themselves sooner or later queuing up at the small porter’s door set into one of Hell’s Gates. There they would receive a form entitled “Infernal Regions (Local Authority) Hades Admission Application—Provisional (AAAA/342)” and a soft pencil.

Congas of hopeful applicants wound around the gatehouse like a line drawn by somebody wanting to find out how much writing you could get out of a box of ballpoints. The formerly quiet desert hummed to a steady drone of sub-vocalised reading and flipped pages. New arrivals and old hands queued patiently at the porter’s door to hand in and receive forms. The quickest route through the paper trail necessitated the completion of two thousand, seven hundred, and eighty-five, but nobody had yet fulfilled the extremely narrow conditions that would permit such a speedy passage. Most could anticipate three or four times as many, not counting forms rejected for mistakes; the hand-picked team of administrative imps that dealt with admissions didn’t like errors at all, nor did they issue erasers.

Through the muttering crowds, stepping over form-fillers and never pausing to apologise, came a pale man. Johannes Cabal was walking to Hell.

Tow-headed, lean, in his late twenties, but with any spirit of that youth long since evaporated, Cabal seemed otherwise unremarkable except for his air of intent, his unwavering advance on the gatehouse, and his clothes.

“Hey, watch it!” barked Al Capone, wrestling with the spelling of “venereal,” as Cabal stepped over him. “Why don’t you just…” The protest died on his lips. “Hey … Hey! That guy’s dressed! He’s got clothes!”

It was the first sensation that the desert had ever experienced. The damned parted before Cabal, who, in his turn, seemed to accept this as his due. Some excitedly speculated that he must be a messenger from the Other Place, that the end times had finally arrived. Others pointed out that nothing in Revelation referred to a man in a black hat and sensible shoes.

Cabal walked directly to the porter’s door and slammed his hand on the closed window. While he waited for a reply, he looked about him, and the damned withered beneath his soulless and impassive gaze.

“What do ye want?” demanded a weasely man wearing a teller’s shade from the other side, a man named Arthur Trubshaw.

Sartre said that Hell was other people. It transpires that one of the other people was Trubshaw. He had lived a life of bureaucratic exactitude as a clerk out in a dusty bank in a dusty town in the dusty Old West. He crossed all the “t”s and dotted all the “i”s. Then he made double entries of his double entries, filed the crossed “t”s, cross-referenced the dotted “i”s in tabulated form against the dotted “j”s, barred any zeroes for reasons of disambiguation, and shaded in the relative frequencies on a pie chart he was maintaining.

Arthur Trubshaw’s life of licentious proceduralism was brought to an abrupt end when he was shot to death during a robbery at the bank. He did not die heroically: not unless one considers demanding a receipt from bandits as being in some sense praiseworthy.

Even in Hell, Trubshaw had continued to demonstrate an unswerving devotion to the penny ante, the nit-picking, the terribly trivial, the very things that had poisoned his soul and condemned him in the first place. Given such a mania for order, a den of chaos like Hell should have been an ideal punishment. Trubshaw, however, just regarded it as a challenge.

At first the demons assigned to torment him laughed diabolically at his aspirations and looked forward greedily to the sweet juices that drip from crushed hopes. Then they discovered that, while they had been laughing, Trubshaw had rationalised their tormenting schedules for maximum tormenting efficiency, organised a time-and-motion study for the imps, and, in passing, tidied the underwear drawers of the demon princes and princesses. Lilith, in particular, was mortified.

Never one to squander such a remarkably irritating talent, Satan put Trubshaw in charge of admissions. Hell had grown a new, unofficial ring.

“I want to see Satan. Now.” Cabal’s accent was clipped and faintly Teutonic. “I don’t have an appointment.”

By now Trubshaw had noticed the clothes and was considering possible explanations. “And who might ye be? The Archangel Gabriel?” He started the sentence as a joke but modified his tone halfway through. After all, perhaps it was.

“My name is Johannes Cabal. Satan will see me.”

“So ye’re nobody special, then?”

Cabal gave him a hard look. “It is hardly my place to say. Now, open this door.”

Clothes or no clothes, Trubshaw decided he was on pretty familiar ground after all. He produced a copy of AAAA/342 and pushed it towards Cabal.

“Ye’ll need to fill this in, mister!” he said, and indulged himself in a chuckle, a horrible noise, like a clockwork crow running down. Cabal gave the form a cursory glance and handed it back.

“You misunderstand. I’m not staying. I have business to discuss. Then I’m leaving.” There was a muted gasp from the interested onlookers.