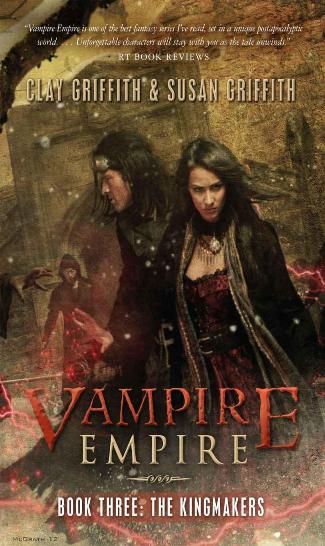 Published 2012 by Pyr®, an imprint of Prometheus Books

The Kingmakers
. Copyright © 2012 by Clay Griffith and Susan Griffith. All rights reserved. No part of this publication may be reproduced, stored in a retrieval system, or transmitted in any form or by any means, digital, electronic, mechanical, photocopying, recording, or otherwise, or conveyed via the Internet or a website without prior written permission of the publisher, except in the case of brief quotations embodied in critical articles and reviews.

The kingmakers / by Clay Griffith and Susan Griffith.

N
IGHTFALL DRAPED OVER
No-Man's-Land like a burial shroud. Men huddled in freezing, wet trenches and stared into the darkness, terrified of what would erupt from it.

Elbows and rifles rested on the ever-crumbling dirt banks. They stared across the plain at the vague shape of their distant objective, the town of Grenoble, surrounded on all sides by the moon-white Alps. Frigid rain had flooded the trenches and the tramping of thousands of soldiers' feet churned the ground into ragged mud, now iced over from the freezing temperatures. Extremities were victims of frostbite. Every tenth man was already sick, dying, or dead. The only thing that gave them courage as they huddled and shivered in the black and dirty ice was that a legend stood among them.

Unaffected by the bitter wind blowing through the hand-hewn trenches of dirt and rock, the Greyfriar stood tall and straight, looking into the ebony maw around them. He wore a dark uniform, but from a different age. He sported the short tunic of a Napoleonic Era rifleman with its intricate piping. His grey trousers and high boots spoke of a
long-lost dragoon. Over it all, he wore a heavy cloak. His hand rested on the hilt of his rapier. Even though it was the dead of night the Greyfriar wore shaded mirrored glasses and a Bedouin head wrap concealing his features.

He had walked out of the darkness from a solitary patrol, the only one of them brave enough to wander the wasteland alone. He was the Greyfriar, the mysterious swordsman of the north. He was the consort of Empress Adele. And he could hear whispers from the soldiers, about him and about the empress they loved, as he strode the line.

Colonel Raheem Roxton weaved through the mass of men and mud until he reached the swordsman's side. The colonel's broad shoulders were hunched and his hands were stiff. His face was streaked with dirt and camouflage paint. “Are you on your way back to command?”

“No, not yet,” replied Greyfriar.

“You must enjoy our company then, for I doubt you're lingering here for our moldy rations and rampant dysentery.”

“No.” His voice was quiet yet insistent. “You are about to be overrun.”

Roxton went pale. “What do you mean? You saw them?”

“Yes, they will be here very soon.”

The colonel went down the line, yelling for a runner. The men around Greyfriar stared up at him with frightened, blackened faces. The swordsman stood on the fire step, a step cut at the bottom of the trench to allow the men to crest the top. He stared toward the city.

A lone prayer was whispered as a man near Greyfriar pulled out a cross. The men around him made crude comments.

“That cross didn't do Matthews any good.”

“Maybe you should wrap that round your gun barrel to improve your aim.”

Curwood ignored them while the Greyfriar felt discomfort rise from the words and object of faith. This man's belief forced Greyfriar to slip farther down the line. Curwood endured the glares of his fellow soldiers as they assumed even the famous Greyfriar was embarrassed by such trivial superstition in this world of steel and steam. Prayer hadn't saved
the world when the vampires rose up 150 years ago, so why would it protect a terrified man in battle?

Greyfriar continued to walk down the trench, letting as many men see him as possible. If his presence brought them some semblance of courage, then it was worth the effort before death was upon them.

He stiffened abruptly. Leaping out onto the bank in a single flex of his legs, he landed effortlessly on its lip, ignoring the slick and precarious ice. His gaze was fixated into the pitch black.

Men leaned deeper onto the muddy rim and readied their weapons, straining to see or hear what the Greyfriar had, but everything was silent and still. His dark grey cape fluttered in the wind, billowing out over their heads.

“They are coming,” he told them.

The phrase swept down the trench as rifle bolts clacked and tensions rose.

Colonel Roxton climbed out laboriously, slipping and grunting, to stand beside the Greyfriar. “How many?”

“Thousands,” the swordsman replied, crossing his arms to draw both a rapier and a cutlass from their scabbards with a scraping hiss.

“Are you sure? I can't see a blasted thing!”

“Yes.” The rapier pointed above them to the north. “There.”

As if on cue, flares lofted into the sky about a mile ahead of them, where a brave patrol was scouting. With each phosphorous burst, the darkness receded and hundreds of black shapes born of nightmares were silhouetted briefly before the night swallowed them again. There were so many drifting shadows they nearly blotted out the flashes of light. Precious seconds passed before cannons opened up miles to their rear, near command. The boom of the guns vibrated the ground and the soldiers' breastbones. The artillery pounded the sky in a hailstorm of shrapnel, but Greyfriar could see that they had already lost their chance. Most of the vampires were inside the range of the cannons and they would soon be in the trenches, slaughtering with tooth and claw. The big guns couldn't adjust fast enough against such a swift adversary.

Out of the darkness erupted fanged monsters. A wave of vampires
dropped from the sky. Men screamed as they met an enemy that many had only read about but all feared. The screaming was lost in the terrible roaring of the artillery, but it could be seen in the soldiers' faces.

The men fired wildly into the air, but the enemy was already among them and rifles were better used as truncheons. There was a scramble for trench weapons as savage hand-to-hand combat commenced. Bone-crushing maces and spiked clubs lifted and fell, short swords thrust at shapes, but still the troopers were hard-pressed to hold back the advancing wave with such crude instruments.

Greyfriar rushed forward, leaping over the trench and into the air. His rapier slashed through pale flesh and limbs. He twisted in midair, landing on the precarious lip of the hollowed-out earth. Claws snagged his cloak, ripping it from his back. He spun and the steel blade sliced through the top of the skull of the nearest vampire. His cloak and the beast dropped to the bloody dirt.

More creatures settled to the ground around him, fast, darting, but his swords were blinding and they tore through the enemy, a blur even to vampire eyes. His blades arced back and forth, both in front and behind. With a graceful spin, he swept his cutlass low and forced the vampires up and back. One vampire dove at a human below him in the trench, and Greyfriar's cutlass struck deep, wedging itself in the vampire's shoulder, preventing the killing stroke, but only just. The vampire turned on him, pulling the cutlass from his hand, its razor-sharp claws slicing forward with intent to gut him. Each blow landed on Greyfriar's rapier, and for a moment he struggled against the onslaught. The vampire came at him with its dark power surging hot. Greyfriar matched the enemy's incredible speed. The two combatants battled in a macabre dance.

Then the creature vaulted away, executing an immense leap that brought it onto another soldier. Vicious claws sliced into the human. Greyfriar couldn't save the man as two more vampires challenged him.

A wave of fire boiled so close that Greyfriar was momentarily blinded. He felt claws rip across his hip. The heat from the nearby flamethrower separated Greyfriar from the cadre of vampires circling him, his adversaries consumed by the hot flames. The heat drove him back also, but it only gained him a brief respite.

Four vampires hurtled out of the returning darkness in a calculated rush, two from the air and two from opposite sides. Greyfriar raised a pistol, and the crack of the shot split the air. The first vampire was flung back into the dim night, its face gone. Greyfriar ducked under the swipe of the second one and it sped past into the trench, falling upon a human. Greyfriar swore and swung his rapier. It sung as it moved in a wide arc. One vampire pulled its attack at the last minute, but the blade caught the second one across the throat. Red spewed forth, black as ink, and was lost in the mud at their feet. Its clawed hand clutched its weeping throat and it fell to its knees. Greyfriar kicked the dying creature to the ground and raced forward toward the escaping one and drove his sword point into the heart of his enemy, twisting it violently. The vampire convulsed once and then fell face forward as Greyfriar yanked out his weapon.

The smell of blood rose up in his nostrils. It was everywhere.

The first break of day spilled over the crest of the mountain, but there was no cheer from the men. Those still alive fought on, seeing their horrific adversaries now in the thin light of day. The battle was going poorly, but the Equatorians refused to give up. They knew they were trapped.

Greyfriar darted forward to fight with a circle of men trapped outside the trenches. Vampires swarmed the soldiers, who struggled to retreat and re-form their square as comrades dropped. The men's weapons were trained up and out to cover ground and air.

The vampires pulled back, lifting into the sky and floating back toward Grenoble. Humans stood shocked for a moment, and then men slumped to the ground. Some laughed and some wept as soft snowflakes began to fall.

Black smoke drifted across the sea of blood-soaked mud and dying flesh. The morning light shone on the wet earth covered with corpses so thick that it was difficult to recognize each sullied shape.

Greyfriar walked along the edge of the trench. His mouth grew grim beneath his headwrap. This was not glorious fighting. This was not heroic adventure. This was slaughter. Thousands of dead humans stretched out around him. He had saved only a handful.

He spied the man called Curwood, still alive, huddled in the mud,
clutching his cross and a broken mace. His comrades lay dead around him. Perhaps the rest of the company shouldn't have been so quick to discount the power of faith.

The shaking soldier looked up with streaks of blood on his face. “I fought them, sir. Fought for the empress.”

Greyfriar gave the young man a quick nod. “Well done. You will have the chance to fight again soon.”

The war with the vampires was dragging into its fifth month. And the humans were losing.