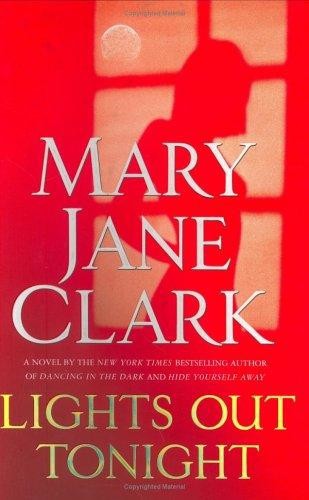 Do You Want to Know a Secret?

Do You Promise Not to Tell?

Let Me Whisper in Your Ear

Dancing in the Dark

LIGHTS OUT TONIGHT. Copyright © 2006 by Mary Jane Clark. All rights reserved. Printed in the United States of America. No part of this book may be used or reproduced in any manner whatsoever without written permission except in the case of brief quotations embodied in critical articles or reviews. For information, address St. Martin’s Press, 175 Fifth Avenue, New York, N.Y. 10010.

This is a work of fiction. All the characters, organizations, places, and events portrayed in this novel are either products of the author’s imagination or are used fictitiously.

For Elizabeth,
who raised the curtain on this story,
with much love, admiration, and joy

It was just a few feet from the front door of the convenience store to the shiny, new car parked in the spot marked “handicapped.” Two perfectly good legs strode to the vehicle and swung themselves inside. An able body leaned back against the car seat as two steady hands twisted the cap off a soda bottle and lifted it to a parched mouth. The first cold drink tasted good, but the second was ruined by the voice that came through the open window.

“Hey. Can’t you read? The spot says ‘handicapped.’” A lanky young man dressed in shorts, a black “I Love New York” T-shirt, and hiking boots stood beside the car and glared at the driver. Ignoring him didn’t work.

“Give me a break, will you please?”

“It looks to me like you’ve already been given a break. All your body parts seem to be working amazingly well.”

“Come on, Tommy,” said a young woman in shorts and mud-caked tennis shoes who pulled at his shirtsleeve. “It’s not worth it. Let’s go.”

“No, Amy. It’s wrong, and I can’t stand it when I see some lazy, inconsiderate idiot using a space meant to be there for someone who really needs it.”

“Stop showing off for your girlfriend, will you, Sir Galahad? Mind your own business.”

The car backed out of the parking space, leaving the indignant couple standing openmouthed. As the vehicle pulled away, the driver glanced in the rearview mirror.

Was that what it looked like? Was that stupid girl taking a picture with her cell phone? What if they were angry enough to go to the police with it? There would be a picture of the car. With the way technology was these days, they’d probably be able to enhance the image enough to make out the license plate.
Not good.

If the police came around now, it could ruin everything.

Tommy and Amy drove by in their old yellow convertible, engrossed in conversation, oblivious to the fact they were being watched. Nor did either of them seem to realize they were being followed for the next few miles on the meandering country road.

The route was familiar. After the next farmhouse and barn, there would be no buildings for several miles. A long stretch of road dropped off sharply at one side. That would be the place to do it.

If they were so damned insistent on doing the right thing, why were they passing that joint back and forth? They were actually flaunting their marijuana smoking as they drove with the
top down, secure in the knowledge that police cars, or any cars for that matter, on this road were few and far between. So much the better. If autopsies were done, they would show marijuana in the kids’ systems, and that would be blamed for the accident.

The young man raised his arm, wrapped it around his girlfriend, and pulled her closer. Now was as good a time as any to floor the accelerator. The car sped toward the yellow convertible, catching up and ramming the already dented rear fender.

Tommy looked into his rearview mirror, and Amy twisted around to see what was happening. It took them just an instant to recognize their assailant. The young man held his middle finger up in anger and defiance as the car rammed into the yellow convertible again.

Gripping the steering wheel with both hands now, Tommy tried to maintain control, but the third collision pushed the convertible to the side of the road. The fourth sent it hurtling over the edge of the precipice.

The wheels were still spinning on the overturned convertible as the killer reached in to check Amy’s and Tommy’s pulses and retrieve the cell phone.

“I can have it ready for you at the end of the week.”

“I need it sooner than that.”

“Look around.” The owner pointed to the other cars jammed into the parking lot.

While the repairmen worked, there was time to go around the corner to a coffee shop and get some breakfast. Waiting for the scrambled eggs to come provided the opportunity to study the cell phone that had been in the dead girl’s pocket. The last message had been sent not to a phone number but to an Internet address.

It had been sent at 5:47
P.M
. Had Amy managed to get off a message even as she and her boyfriend were being run off the road? Had she transmitted the picture of her attacker’s car?

The alarm clock screeched, and Caroline squeezed her eyelids more tightly. It couldn’t be time to get up already. She uttered a low groan as she turned her head to read the insistent green electronic numbers glowing from the clock on the nightstand. Four o’clock. She had to get up. In half an hour Rodney would be waiting downstairs.

Caroline willed herself to throw back the light down blanket and sit up on the edge of the queen-size bed. She sighed as she reached out to switch on the lamp, knowing she had herself to blame. If she had finished her review before she left the office yesterday, she could have had another two, or even three, hours of sleep now. Better yet, she could have taped the review in the afternoon and not have had to go in at all this morning. As it was, she was barely leaving herself enough time to compose something worthy of airing on
KEY to America.
The nation’s highly rated morning news broadcast, in the person of its fanatical executive producer, Linus Nazareth, demanded her best. But a heated conversation with Linus was the reason she had bolted from the Broadcast Center yesterday before writing her
review. Caroline had figured it was better to leave then than to say something she would regret.

The warm spray of the shower, usually so soothing, felt like an assault on her pale skin at this ungodly hour. Caroline braced herself as she bowed her head under the needles of water. She applied shampoo with conditioner, quickly worked it through her dark brown hair, and rinsed. Grabbing one towel and wrapping it turban-style around her head, she took another and moved it up and down her body. She didn’t wipe the steam from the mirror. If her eyes and face were swollen from the crying she’d done last night, she didn’t want to know, but she could thank Linus for it. She was angry with herself now for having let him get to her like that. She didn’t even respect the guy. Linus Nazareth possessed none of the characteristics she valued, with the possible exception of being bright. But sometimes Caroline wondered if he really was all that smart. Perhaps his roaring directives and brash manners were his way of masking his insecurities.

Enough time wasted on Linus Nazareth,
Caroline thought. She gathered up her toiletries and deposited them in her travel kit, which she then placed in the open suitcase lying on the bedroom floor.
Tonight I’ll be with Nick.
She folded the lace nightgown, Nick’s favorite, and carefully laid it on top of the pile of clothing. She was zipping the suitcase closed when she remembered the sandals Meg wanted her to bring up. Caroline walked down the hallway to her stepdaughter’s bedroom and went to the double closet. She spotted the soft leather sandals she and Nick had bought for Meg when they’d been in Capri on their honeymoon. As Caroline bent down to get the sandals from the floor,
she noticed a ziplock bag. She picked it up and immediately knew what she was seeing through the clear plastic.

Her body tensed as she stared at the bag in her hands. What should she do? Confront Meg? Tell Nick? Caroline had no idea what her response should be. Either choice could blow up in her face. But this was a big problem, one that wasn’t going to go away.

Conscious of the time, Caroline put the bag back where she had found it. For now, the bottom of the closet was as good a place as any to leave it. She scooped up the sandals and closed the closet door.

She walked back to the master bedroom. Dressing in the violet-colored blouse and white skirt she had laid out last night before she crawled into bed, Caroline slipped on a pair of high-heeled sandals, pulled a comb through her wet hair, grabbed her shoulder bag, and hurried out of the apartment, rolling her suitcase behind her. When the elevator doors slid open on the first floor, she looked across the lobby to the heavy glass doors. The driver was waiting at the curb outside.

“Mornin’.” The man smiled as he opened the rear door of the dark blue sedan.

“Nice to see you again, Rodney. It’s been a while. Thanks,” said Caroline, getting into the backseat as the chauffeur took her suitcase and stashed it in the trunk. Most days—the days she was better organized and less rushed—Caroline took a taxi to work; but in the very early morning hours, it was better, safer, and more reliable to arrange for the car service. As the sedan traveled down Central Park West, Caroline heard the
buzzing inside her bag and fumbled around until she found her cell phone.