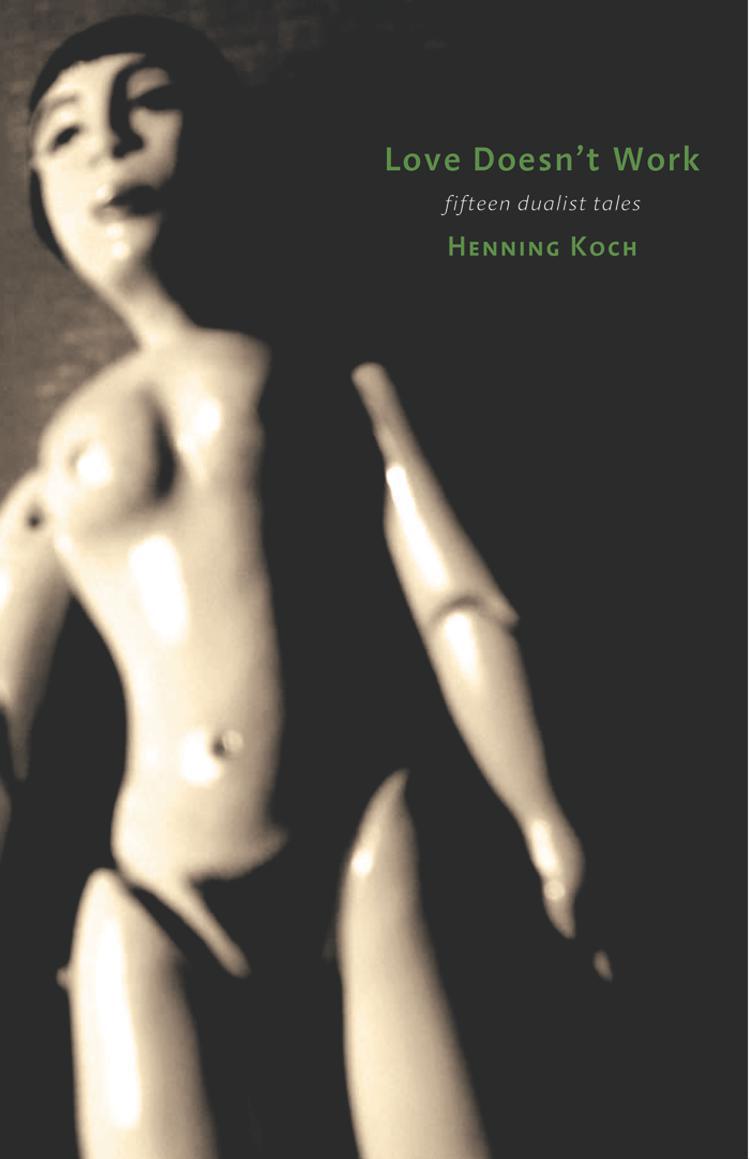 All rights reserved, except for brief quotations in critical articles or reviews. No part of this book may be reproduced in any manner without prior written permission from the publisher: Dzanc Books - 1334 Woodbourne Street, Westland, MI 48186

My Gift, My Dictation

Have You Met Lumpa?

INGMAR BERGMAN CALLED ME BACK AFTER I LEFT HIM A MESSAGE ABOUT THE FLOODED BATHROOM. I asked him to come at about three o’clock.

“How much do you charge per hour?” I said.

“Don’t you worry. I understand the realities of the situation better than most.”

I didn’t like employing Ingmar Bergmans for this kind of thing, but what the hell were you supposed to do? Normal plumbers cost a lot more, and since my retirement I had to think about such things. Also you got a bit of conversation out of it. Ingmar Bergmans liked to talk. I didn’t speak Polish or Czech and I liked to hear a bit of Swedish now and then. Was that a crime?

He didn’t arrive until twenty to four, and when he walked in he didn’t even have the decency to apologize. Instead I got a moronic smile and an embarrassed shrug. “You know how it is,” he said.

“Well you wouldn’t, would you? You’re not an artist.”

He got started. It was a dirty job, a blocked exit pipe from the water closet, but he worked without complaint. I waited until he’d broken the hog’s back, then asked him into the parlor for a cup of coffee.

Afterward, we sat on my late grandmother’s best sofa with one of her lace tablecloths on the table, eating home-baked cinnamon buns baked to her recipe. Ingmar folded his hands in his lap.

“I guess you want to talk about film?” he said with disguised relish.

“What do you want to talk about?”

“Just because I’m an Ingmar Bergman doesn’t mean we have to talk about film.”

“But you’re a genius film director. Everyone knows that.”

“Listen to me,” he said sharply. And then he went through everything I already knew.

In 2010 the Swedish Film Institute held a meeting to discuss the international crisis in Swedish film. There was no lack of directors in Sweden, but the quality was simply not there, just an endless parade of trendy young video dwarfs, beer-gutted monstrosities with plasticized wives, stuttering illiterates and self-glorifying mediocrity all over the place. Swedish films had begun to lose that ubiquitous Scandinavian feeling. Winter light. Snow glistening under the fir trees. A shoreline in Gotland where big waves roll in while a bearded man stands reflecting on his life in flashback. Norwegian fjord ponies with bells, burning torches on the sleighs, packs of wolves with lolling tongues, a peasant deflowering a goat in a byre, a girl with a basket picking blueberries in a dark forest, an old pastor in the sacristy snatching a quick glass of rye before Christmas Mass.

All this was on the verge of being lost forever.

Meanwhile, the people in the streets were ingesting hamburgers and flocking to see second-rate American films full of guns, drugs and decadent sex.

And because of this the world had certainly become a worse place.

There was a stark realization at the Swedish Film Institute that radical measures were needed. Ingmar Bergman was called in, or rather, they grovelled and begged until given an audience at his home on Fårö.

Mr. Bergman was by then very advanced in years, tottering about with a stick. His mysterious eyes twinkled at the Film Institute Committee as he waited for them to speak. The Committee made a suggestion; Ingmar Bergman’s face flushed with pride when he realized the implications. This was the masterstroke. His vision would dominate the Scandinavian millennium.

Slowly the words came stumbling over his dried lips: “I am Sweden.”

And with this he allowed the doctors to take samples of his stem cells.

The Committee later brought these cells to Stockholm, where two hundred and fifty Ingmar Bergman clones were produced, then released like hungry lions among a herd of cud-chewing cattle.

Problems were evident almost from the very beginning.

In Sweden, there was a bloodbath. Twenty-six Ingmar Bergmans disappeared. Several were found floating in the Baltic. One was later located in an ashram in Madhya Pradesh. A few ended up working in the Russian oil industry as drill platform operators, one was found cut into small pieces in a bin-liner in Malmö. Around fifty of the Ingmar Bergmans were detained in psychiatric hospitals, for which the government at once demanded compensation from the Swedish Film Institute. One Ingmar Bergman became the Chief Executive of the West Coast Fishermen’s Federation, and disavowed any further interest in filmmaking.

Between those Ingmar Bergman clones that did venture into the film industry, there was internecine competition.

One Ingmar Bergman raised the necessary finance to make a film about a man involved in an extramarital affair with his own cousin. The set-up of the story was that the cousin had saved him from drowning when he was twelve years old. Ever after, the man lived with a terrible, phobic horror of water which made it difficult for him to take a shower. His wife—an evil, wart-speckled hag—hated him and refused even to sleep in the same room. Only his cousin could bring him out of these deep wells of panic and into the light. This lovely, suffering woman spent hours soothing him before he would enter the bathroom. Only with his cousin could he maintain his bodily hygiene while at the same time enjoying the fruits of a sexual relationship, albeit one that was considered taboo in society. His wife felt ill-used, maybe even justifiably so, yet this did not excuse her argumentative, angst-ridden behavior.

Two days before commencement of principal photography, Ingmar Bergman was run over by a tram.

Another Ingmar Bergman wanted to make a film about a woman who heard voices. Her psychologist was initially convinced that she was suffering from paranoid delusions, but in the course of their therapeutic sessions it gradually dawned on him that she was communing with his forefathers. Specifically, she was in contact with his ascetic great-great-grandfather, who repeatedly ordered him to stop working as a therapist and take up his true vocation as a wandering lay preacher.

This Ingmar Bergman was also killed, when a light plane flew into his house. The pilot was not an Ingmar Bergman, just an ordinary film director whose career lay in ruins.

One Ingmar Bergman stood out as a man of leadership, a quality the others lacked. He gathered a group of twenty Ingmar Bergmans around him, controlled their creative drives with a Proustian ferocity and forced them under oath and contract to work up his plot-lines into finished manuscripts. From time to time one of them disappeared, usually after creative differences or some brazen attempt to go ahead with a solo project.

The national media blustered and heckled about murder and corruption at the heart of Sweden’s film industry, but its journalists were silenced with bribes or bullets. The Swedish film miracle was once again up-and-running, introducing the world to a new filmic genre, the so-called “death rattle,” characterized by the presence of a dying person, usually a retired/semi-retired priest or schoolteacher reflecting on his/her life and reaching an insight that sparks a crisis. In many cases the resolution of this crisis hinges on the necessity of a reconciliation with a long-lost son/daughter. This long-lost person is travelling as fast as he/she can, in order to speak to the dying protagonist before he/she expires. Frequently this journey takes the form of a frantic chase on horseback—occasionally a sleigh with burning torches, occasionally a pack of wolves/bears/lynxes in pursuit, occasionally a blunderbuss used to dispatch a number of these wolves/bears/lynxes—through deep, almost impassable snow. On a couple of occasions, several Ingmar Bergmans used the device of an epic long-distance terrain-skating journey across a vast frozen lake inhabited by large, aggressive elk. In some cases this person, whether a friend/ex-lover/son/daughter, arrives too late to be enlightened by the last words muttered from the dying person’s lips. In other cases, when the loved one does finally arrive, there is a further misunderstanding prompting the loved one to storm out of the house, leaving the dying person to bitterly contemplate an eternity of antagonism and unfulfilled love.

Audiences were thus obliged to endure the bittersweet reality of misinformed love, a truth destined never to be known outside the reality of the film. Ultimately the audience always turned round and looked at the cinema fire exits glowing in the dark, knowing they were now irretrievably lost, destined never again to enter the codex.

In fact, everywhere there were critics writing about Swedish cinema—“An almost Oriental purity of style and vision…” Or “Melodrama married through sparse visionary unity with the Japanese haiku form…”

Cinema audiences grew knowledgeable about every departure from the rules of the genre. There were sighs and irritated coughs every time a lesser Bergman attempted to innovate or depart from the established formats laid down by the greater Ingmar Bergmans.

For instance, one Ingmar Bergman, a member of the powerful “Script IB Group,” tried to introduce a new dramaturgy in which a dying priest suddenly revives and establishes a loving relationship with his long-lost child.

Having thus displayed his poor judgment, this individual suddenly broke his sternum and was forced to retire from the film business.

After delivering his long-winded explanation, most of which I already knew and have more or less paraphrased here, Ingmar Bergman, my plumber, helped himself to a second cinnamon roll. Shaking with emotion, he chewed it intensely until it was a mere lump of dough in his throat, suitable only for swallowing and disposing of in the nether heartlands of his stomach, then his greater intestine.

I leaned forward and whispered: “If the chance presented itself, would you want to make a film of your own?”

Ingmar Bergman smiled coolly and focused his sad eyes on me. “My dear fellow, you must be utterly deranged! Do you really believe I would volunteer such information to you, a mere pensioner?”

Then it happened, that weird thing I am still sitting here wondering about. Should I have reported him to the Film Institute for recidivist behavior? After all, he had no license to indulge in creative activities.

Had I done so, I might have saved his life!

Ingmar Bergman got out a little camera and before I knew it, he had taken a photo of me.

Then he stood up and said, “I always photograph my clients. I’m assembling an enormous photo-collage composed of all these portraits.”

“If you stand at a good distance, you can see it’s a self-portrait of me. I am using your identity to fashion a likeness of myself, because that is what we all do, my friend.”

I was puzzled. Bergmans can be so puzzling. “So what’s the meaning of it? This self-portrait?”

He smiled patiently. “If one has an ego, if one is a genius as I decidedly am, one has to do what one has to do. It has fallen to me to spend my life, indeed to waste my life, as a plumber. On the other hand I have no doubt that I would similarly feel I had squandered my years had I worked as a film director. All things are vain and meaningless except Art, and all attempts at making Art are doomed to fail.”

“It makes me glad I’m not an artist myself.”