Read Magic in Our Hearts Online 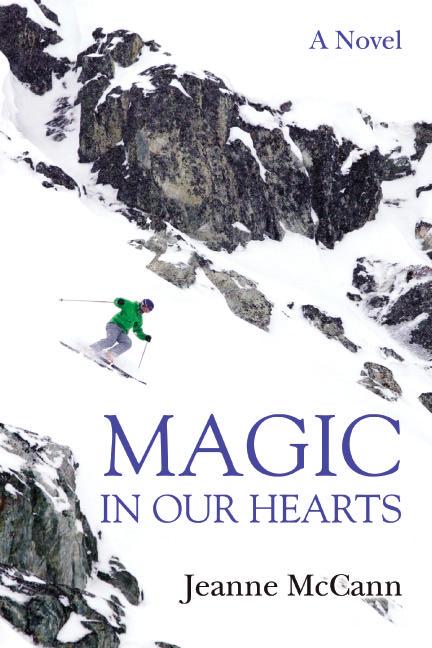 All rights reserved. No part of this book may be used or reproduced by any means, graphic, electronic, or mechanical, including photocopying, recording, taping or by any information storage retrieval system without the written permission of the publisher except in the case of brief quotations embodied in critical articles and reviews.

iUniverse books may be ordered through booksellers or by contacting: iUniverse

This is a work of fiction. All of the characters, names, incidents, organizations, and dialogue in this novel are either the products of the author’s imagination or are used fictitiously.

To the Twenty Year Club …

Annie and Mar, Helen and Toni, and Ms. P.

It is amazing that we’re all going strong after twenty years—it isn’t just magic!

Thanks for the encouragement from family and friends and to Toni’s editing skills, your support makes writing so much more fun.

This was an interesting book to write after experiencing knee replacement surgery. The recovery was a life-changing event and I was glad to be able to illustrate it in this story.

“God, Jeb, I am so
not
enjoying my life right now.” An elegant woman in a stunning navy blue evening gown slouched lazily down on the stylish black leather couch. Diamond studs in her earlobes sent out fiery sparks each time she moved her head. Her posture was completely incongruous to her attire. She looked like she had just stepped off a fashion runway and collapsed.

Looking around the high-end condominium located in Brentwood, a suburb of Los Angeles where the movers and shakers lived, you could tell that the person who occupied the home was wealthy. Watercolors by local artists adorned the walls and lush off-white carpet stretched from wall to wall. The kitchen area boasted a Sub-Zero refrigerator and a Viking range, something one would expect to find in an upscale restaurant. The north side of the large living space was wall-to-wall windows with a view of the surrounding hills dotted with home after expensive home. Along with the plush leather couch, there were side chairs upholstered with a modern op art print containing blacks, blues and creams to match the blue lampshades. The room had been professionally decorated to match its owner, a highly sought after physical therapist to star athletes.

The other spaces in the condominium were similarly decorated, with the exception of the owner’s bedroom. There, the stark style was replaced with opulence and deep jewel colors. The room, with its large four-poster bed, was swad-dled in silk draperies and included a matching bed canopy in deep reds, striking yellows, and burnt orange. The walls were painted a rich goldenrod to add warmth to the sensuous sanctuary. The owner’s true personality became apparent after noting the collection of colored bottles on the antique makeup table along-side various powders and creams. A hardback book by a popular romance novelist lay on the bedside stand, a testimony to the romantic soul of its reader. And Taylor was just that mix of practicality, style, and control, with a center full of romantic notions. She kept this part of herself well hidden except to those closest to her, and they were few. She was an extremely private woman who was fiercely loyal to her close friends. They were her family, and she loved them deeply.

“Honey, you have just about everything a girl could want.” The tall, handsome, silver-haired man in a black tuxedo handed her a glass as he sat down next to her. The tuxedo was Armani, as was the shirt, expensive and well cut to fit the large-shouldered man. His silk pants hung perfectly on his tall frame, looking as elegant as the living room itself, not to mention its other occupant. They both would fit in comfortably at a movie premier, an exclusive club, or an A-list restaurant.

“I know, and I still feel lonely and lost. What’s wrong with me?” The woman laid her head back against a supportive shoulder as she sipped from the glass of brandy.

“What’s going on, Taylor? The business is good, you couldn’t make any more money, and every time I turn around you’re out with another gorgeous woman. What more do you want out of life?”

Taylor Aronson sighed as she looked back at her best friend and business partner, Jebodiah Beauregard III. She smiled and reached out to stroke his chiseled cheek affectionately. He was a gorgeous, caring man. His hair was a generous mane sprinkled throughout with silver. His lips were full and sensuous as he grinned back at her. Many a person had seen them together and commented on what a stunning couple they made. That observation couldn’t have been more off base. There had never been anything sexual between them. Taylor and Jeb were both homosexuals and had been as close as two people could be since their second year of college. They had liked each other from the first moment they had met, and there was no one they trusted more than each other. They had stood by each other’s side for several years and each considered the other to be family.

At the start of their second year of college, each of them were struggling to understand their emerging sexuality. Both were such handsome people that they were understandably inundated with unwanted advances from the opposite sex, yet each had no other person in whom to confide in.

It was at a large college fraternity party that they actually met for the first time.

Taylor had been invited by an acquaintance from her anatomy class. She didn’t know a lot of people at the school, and she accepted the invitation hoping to meet some other students. She had entered the frat house with some trepidation but found it crowded with college students who made her feel welcome. The place was wall-to-wall people in the run-down house, with beer kegs set up prominently in the back yard. She had pushed herself through the mass of loud and energetic people to help herself to a mug of beer.

Mike Sharpe was one of the few people she was acquainted with. He had been in her sociology course earlier that year and had immediately gravitated to Taylor, showing her unwanted attention despite her frequent rejections. She had refused numerous requests to go out with him using humor and honesty to rebuff his advances. She tried to avoid him at this party, but he zeroed in on her almost immediately and cornered her against a wall in the kitchen. Mike was a soccer player and a good-looking young man.

“Come on, Taylor, you know you like me. Why not go to the game with me tomorrow?” Mike teased, as he moved closer to her. In Mike’s mind, there wasn’t another woman in the room that could hold a candle to her. She was in stunning shape, worked out almost religiously, and her dark red hair and bright blue eyes were an unusual combination. Everyone noticed Taylor, and Mike wanted her more than any other young woman he knew. She was so aloof—friendly, but apparently shy—and she refused to go out with him. This was something new to him. Mike was a blond, blue-eyed man, with the stature and demeanor of a young Viking. He never had a problem with dating, or for that matter just hooking up. Girls had been easy for him since junior high—until Taylor, that is. She was a huge challenge and she was driving him crazy. The beer he had been consuming since early evening was adding to the problem. Mike was not a friendly drunk, and he was drinking more than enough beer to become completely hammered. Rejection and the alcohol fueled his temper.

“I do like you, Mike, but I don’t want to go out with you.” Taylor’s voice soft-ened as she spoke. She didn’t want to anger the obviously inebriated man. She also didn’t want to call attention to them and make a scene.

“Why not? I’ll show you a really good time,” Mike whispered, as he moved against Taylor, effectively pinning her against the wall with his body. He easily outweighed Taylor by a hundred pounds.

“No, I just want to kiss you.” Mike demanded as he reached down and held Taylor’s arms against her sides while he nuzzled her neck. Taylor felt panic well up inside her as she struggled against him. No one seemed to be paying attention to them, and she was beginning to be scared. She was usually pretty good at deflecting unwanted attention, but Mike was fueled with anger and alcohol.

“Hey, Mike. I think the lady wants to be let go.” A deep voice spoke from behind Mike. Taylor couldn’t see anything as she continued to struggle to free her arms. Mike’s body completely covered hers as he pressed her tightly against the wall.

“What business is this of yours, you fuck?” Mike turned to find a tall man standing behind him. He stood close to Mike, his eyes locked on his face.

“It’s mine when you’re forcing a woman against her will.” The remark was made quietly, but there was no mistaking the challenge.

Mike turned quickly, aggression boiling up as he moved to take on the intruder. Taylor pushed away from Mike in time to see the stranger duck Mike’s fist as he tried to plant it in his face. As Mike prepared to try to hit him again, the tall dark-haired man rapidly took him to the ground with a leg sweep and a shoulder hold that pinned Mike to the floor. He had successfully used a martial arts move that had caught Mike completely unaware. He bent over Mike and spoke quietly and with complete authority.

“I suggest you don’t bother this lady anymore. If you do, it will be me that you’ll have to deal with instead of a woman who is half your size. There’s nothing more disgusting than a man who tries to force a woman against her will.”

“Get the fuck off me,” Mike snarled.

“Quit being an ass.” The man stood up slowly and watched as Mike struggled to his feet, then sheepishly moved away. Her rescuer turned and smiled at a stunned and watchful Taylor.

“Are you okay?” he asked softly. His dark eyes were as gentle as his voice.

“Yes, I … I’ve never seen anyone move like that. I’m sorry you had to witness that ugliness.” Taylor blushed with embarrassment as she apologized.

“The only person who should apologize is the jerk that wouldn’t leave you alone.” The man smiled down at Taylor as he spoke quietly to her.

“Well, I really appreciate your help. My name is Taylor.”

“Can I get you a drink Jeb?” Taylor grinned up at her savior.

That was the start of their friendship. It didn’t take either of them long to admit to the other that each was homosexual. It also helped when they went out together because people naturally assumed they were dating and left both of them alone. This pleased both Jeb and Taylor because it allowed them to keep their private lives separate, something they both valued highly. Jeb and Taylor were both trying to understand their attraction to their own sex and spent many hours talking with each other about their feelings.