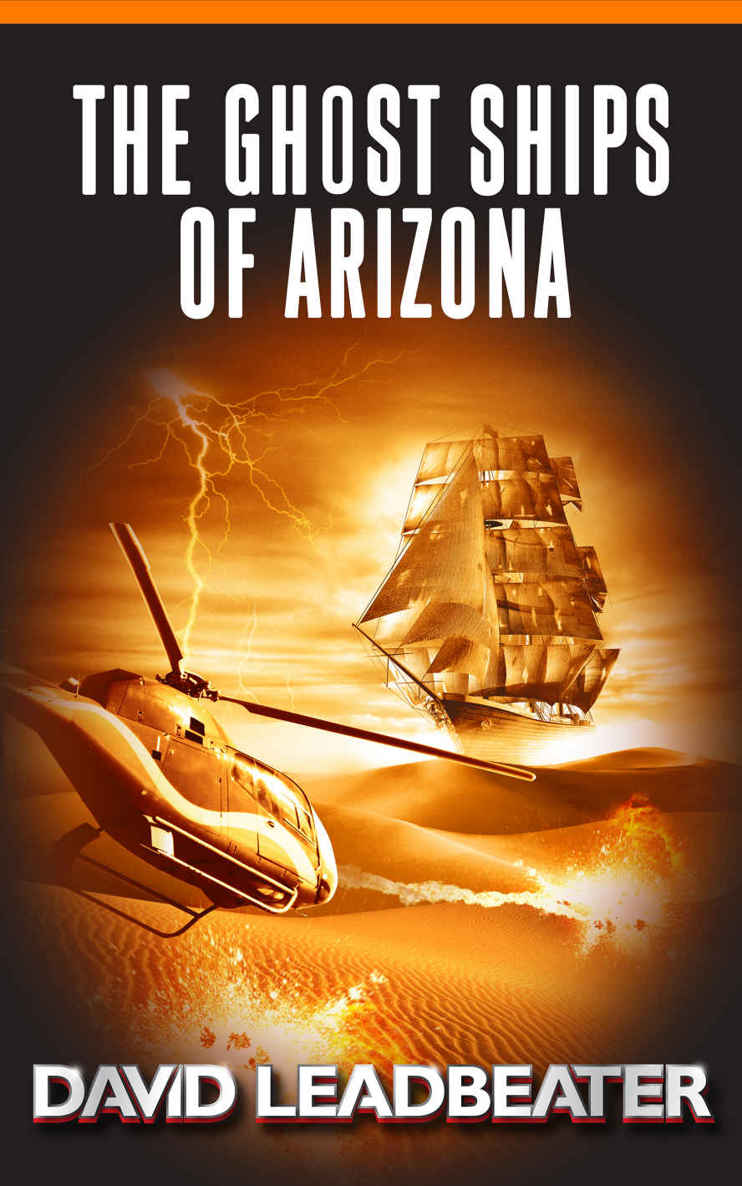 The Ghost Ships of Arizona

All rights reserved. No part of this publication may be reproduced, distributed, or transmitted in any form or by any means, including photocopying, recording, or other electronic or mechanical methods, without the prior written permission of the publisher/author except in the case of brief quotations embodied in critical reviews and certain other non-commercial uses permitted by copyright law.

All characters in this book are fictitious, and any resemblance to actual persons living or dead is purely coincidental.

This ebook is for your personal enjoyment only. This ebook may not be re-sold or given away to other people. If you would like to share this ebook with another person, please purchase any additional copy for each reader. If you're reading this book and did not purchase it, or it was not purchased for your use only, then please return it and purchase your own copy. Thank you for respecting the hard work of this author.

Other Books by David Leadbeater:

The Gates of hell (Matt Drake 3)

The Swords of Babylon (Matt Drake #6)

The Plagues of Pandora (Matt Drake #9)

Walking with Ghosts (A short story)

A Whispering of Ghosts (A short story)

All helpful, genuine comments are welcome. I would love to hear from you.

This book is for everyone who adheres to Alicia’s one true creed:

Other Books by David Leadbeater:

Mukat watched the strange procession uneasily, not entirely sure what he was seeing. The bizarre warlike men with their shiny helmets and jangling clothes had dispatched a small canoe from their outlandish wooden ship. Mukat had never seen a ship before, his tribe were isolated out here in the dunes, but he had heard stories from the elders who’d visited something they called
missions
before other tribes destroyed them
.
On first setting eyes upon this ship the Cahuilla elders had been reservedly pleased, but upon seeing vast arrays of guns and grim-faced soldiers, they had quickly changed their minds. Stories were told of the Spanish and what they had done to tribes when they first came to these lands—before attempting to establish their missions.

A decision was made.

The ship itself, anchored in the bay, would provide a valuable cargo, they were sure. Mukat watched the scouting party rowing ashore and wondered why the invaders couldn’t see the Indian canoes arrayed in their hundreds among the shallows. Was it vanity? Inexperience with the area? Was it that the Cahuilla were so wonderfully skilled? The darkening skies certainly helped. The bustle aboard the ship of war was another, more telling factor—men rushing about their jobs. Mukat wondered why they would go to such lengths. His tribe had survived, lived, loved and died happily within a small area for many, many years. They had little contact with the outside world, and fought only to protect their meagre lands. And yet, sand-covered and sparse and valueless as they were, outsiders constantly sought to visit. What did they hope to find?

Mukat readied himself as the invaders landed. He was aboard a canoe, charged with attacking the large ship whilst a smaller contingent of his brothers dealt with the scouts. Once the fighting and the shouting started they would begin, but he was hoping for more cover, more darkness to fall.

The Indians waited until the last possible moment, allowing the scouting party to disembark, then haul up their canoes and make ready. Mukat now ordered his warriors to begin rowing. Hundreds of small vessels shot out of the shallows, cloaked by the plunging night. By the time the first cry rang out they were over halfway to their goal. By the time the men on the boat gathered and acknowledged the threat they were almost aboard.

Mukat and his warriors gripped their knives between their teeth, affixed their bows to their backs and climbed the long thick ropes toward the deck of the ship. Luckily, the sailors were careless and had flung out more fixing points than just the anchor—they were clearly intending to stay here for some time, a fact already ascertained by such a huge warship carefully navigated so close to the shallows.

Perhaps they were merely repairing a broken mast. Resting after a battle at sea. Exploring for their leader, sat at rest far away in his gloried halls. Perhaps they were only curious. It did not matter. They were a threat, and whatever their original intentions were, once they set eyes on new lands and new peoples they would become more than curious. Mukat had seen it happen before.

They would become greedy.

He reached the deck of the ship first, landing with callused bare feet atop the slick planking. In a moment he adjusted. The tribesmen were no strangers to water—though they generally lived inland, Lake Cahuilla was nearby, enormous and of frequent use. Mukat saw an armed soldier headed his way, the man waving an arquebus—a handheld gun—as if it were a flag.

Mukat used bow and arrow, firing a volley far faster than any of their enemies could comprehend. His closest warriors preferred different weapons, using lances and spears, war clubs and tomahawks. They fell among the invaders too, screaming their war cries, righteously fighting for their lands. A shot smashed into the deck beside Mukat’s foot, sending splinters into his flesh. He looked up, saw a sailor perched above and then climbed to his side, as agile as a squirrel. The man beat at him with the partly wooden weapon, face registering both shock and fear. Mukat withdrew a short knife and cleaved his enemy’s ribs, throwing him down amidst his brethren. Standing for a moment, he surveyed the tableau, measuring the flow of battle.

Warriors swarmed up from the bobbing canoes and onto the decks. Already the wood was greasy with blood, its shine dulled by the ever-darkening skies. His brethren had no armor, but ran hard at the sailors as they fired their weapons. Many survived, screaming, falling among the attackers. Some did not, falling and writhing as they died. A knot of battle formed along the deck. Hatchets rose and fell. Clubs swung hard. Guns fired their deadly cargo. Mukat again took up his bow and fired arrow after arrow into the enemy ranks until his quiver was depleted. Other braves joined him and did the same. Another phalanx of steel-helmeted men surged around the other side of the deck. Mukat and his bowmen jumped down onto them, using knives and short-spears. Men fell, rolling and slipping. Mukat grappled an invader, tore off his helmet, and buried his tomahawk deep into his skull. The man went instantly limp. Mukat wrenched the tomahawk free, still on his knees, and swiped at the thighs of another. When the man partly collapsed, Mukat severed his hamstrings and then part of his neck.