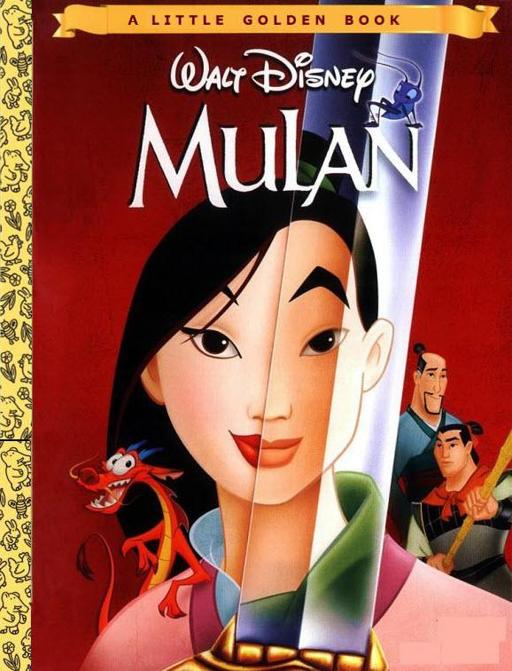 Like A Powerful Dragon
Along The Wall
One Afternoon
Her Father, Fa Zhou
Boom! Boom!
When The Fa Family
“No, Father!”
She Had Made
A Tiny Dragon
When Mulan Reached
The Recruits
Everyone Cheered
“We Can’t Let Him”
Shang Set Out
Shang Was Handed
“We Must Go”
“Fire The Cannons!”
Mulan Leapt
When Shang Came To
The Troops Marched Off
“You Lied Once”
“I Have An Idea”
On A Palace Balcony
The Emperor
Mushu Landed
Shan-Yu
Soon, Mulan
Mushu Was Ready
The End

How Many Have You Read
Back Cover

L
ike a powerful dragon, the Great Wall of China winds across the land. It protects the country’s farmland and villages, its family temples, and miles of bright green rice paddies.

A
long the wall, soldiers stand guard. Little do they suspect that this great barrier is about to be crossed by an army of Huns led by the ferocious Shan-Yu.

O
ne afternoon, a young woman named Mulan sadly returned home from the village. Making a good marriage was the way a young Chinese woman brought honor to her family, but Mulan’s meeting with the Matchmaker that morning had ended in disaster.

H
er father, Fa Zhou, sat with her. With kind, loving words he assured his daughter that, like the late-blooming blossom that will be the most beautiful of all, she, too, would bring honor to the family.

B
OOM! BOOM! BOOM! Suddenly, a loud drum was heard, summoning the people out of their homes.

“The Huns have invaded China!” a messenger announced. “One man from each family must serve in the Imperial Army.”

W
hen the Fa family was called, Fa Zhou handed his cane to his wife and stepped forward.

“N
o, Father!” cried Mulan. She knew her father was as brave as he had been in his youth, but he was no longer strong. He would never be able to survive the war.

It rained hard that night. Mulan went to the family temple, lit some incense, and prayed to her Ancestors.

S
he had made her decision. “I will take Father’s place,” she said.

Mulan took Fa Zhou’s sword and cut her hair short. Then she put on his armor. Disguised as a man, she rode her horse, Khan, into the storm.