Mystery of the Phantom Heist 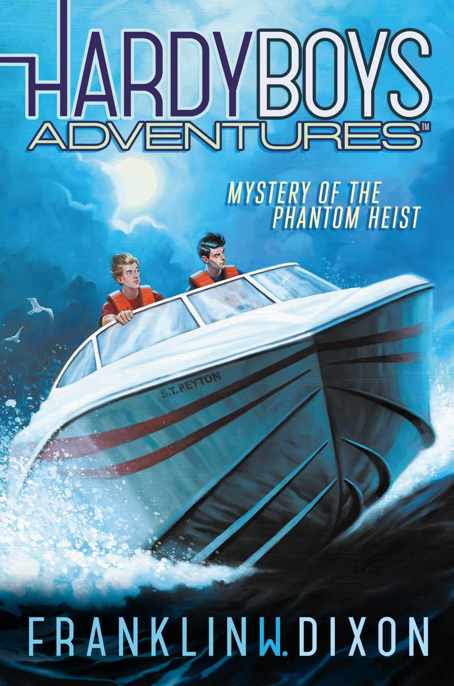 Help,
I thought as my brother held up his prized possession, a tablet, for the gazillionth time. Not another lame clip on YouTube!

It was the last thing I wanted to look at as we sat inside the swanky Peyton mansion. I wanted to check out the two slick cabin cruisers docked outside the bay window!

“Will you give us a break already, Joe?” I told him. “I think we’ve seen enough skateboarding squirrels and break-dancing babies to last a lifetime.”

Our friend Chet Morton cracked a smile. “Yeah, but those rapping sock puppets you showed us before were pretty sick,” he admitted. “Got any more of those?”

Joe shook his head. “Check it out—it’s serious stuff,” he said, practically shoving the tablet in our faces.

Joe knew what I meant. Our ages were only one year apart, but our personalities—worlds apart. Joe was always high-strung, fast-talking, and unpredictable. Me—I’m more the strong, silent type. At least that’s what I like to think.

“Will you look at the clip already?” Joe urged. “I can’t keep it on pause forever.” He hadn’t put down that fancy new tablet since he got it for his birthday. I couldn’t really blame him. We couldn’t have smartphones until we were in college, so the tablet was the next best thing. It surfed the Web, got e-mails—even took pictures and videos. Speaking of videos . . .

“Okay,” I sighed. “But if I see one squirrel or sock puppet—it’s over.”

Chet and I leaned forward to watch the clip. There were no skateboarding squirrels or sock puppets—just a clerk at a fast-food take-out window, handing a paper bag to a customer. The clerk looked about sixteen or seventeen. The person behind the wheel had his back to the camera, which was probably being held by someone in the passenger seat.

“Wait, here it comes,” Joe said. He turned up the volume just as the clerk said, “Six dollars and seventy cents, please.”

The driver reached out to pay. But then he yanked the lid off his jumbo cup and hurled what looked like a slushie all over the kid at the take-out window!

“Keep the change!” the driver cackled before zooming off. I could hear another voice snickering—probably the creep filming the whole thing.

I stared at the screen. “Definitely not cool,” I said.

“And a perfectly good waste of a jumbo slushie,” Chet joked.

“Not funny, Chet,” Joe said with a frown.

“Lonny, a guy in my math class, forwarded it to me,” Joe explained. “Lonny was the poor clerk who got slushied.”

“Did they ever find the guys who did it?” Chet asked.

Joe shook his head and said, “The burger place called the cops, but so far the slushie slinger’s still on the loose.”

“That’s about as funny as those skateboarding squirrels, Morton,” I complained. “What we just saw was someone’s idea of a dumb prank.”

This time Chet heaved a big sigh. “Time out, you guys!” he said. “You promised your dad you were going to slow down the detective work, at least for now.”

“Slow down?” Joe asked. “From something we’ve been doing since we were seven and eight? Not a chance, bud.”

Of course, what Joe didn’t mention was that we were one wrong move away from reform school. No one knew about the Deal except our family, the police, and our former principal—who had his own issues to deal with now!

“Yeah, but a promise is a promise,” I said. “So put that thing away already, Joe.”

“Before somebody comes in and sees it,” Chet added.

“What would be so bad about that?” Joe asked.

“Because,” Chet said, smiling, “surfing clips on YouTube isn’t the thing to be doing in the parlor of one of the über-richest homes in Bayport.”

Glancing around the posh room we were sitting in, I knew Chet got the über-rich part right.

“Check out the pool table, you guys,” I said.

“As soon as I finish checking out those little beauties,” Chet said, nodding toward a nearby table. On it was a silver platter filled with fancy frosted pastries.

“Don’t even think of taking one,” Joe said, pointing to a portrait hanging on the
wall. “Not while he’s watching us.”

I studied the portrait in the heavy wooden frame. The subject was a middle-aged guy in a blue blazer and beige pants. His hair was dark, with streaks of gray, and he was holding a golf club. I figured he was Sanford T. Peyton, the owner of the house, the boats, and the pastries.

I didn’t know much about him, just that when the multibillionaire dude wasn’t living large in Bayport with his wife and daughter, he was opening hotels all over the country and maybe the world. The guy was crazy rich. And right now, crazy late!

“We’ve been waiting in this room almost half an hour,” I said as I glanced at the antique clock standing against the wall. “Can someone please remind me why we’re here?”

“Gladly!” Chet said. He stood up with a smug smile. “My friends, we are about to be interviewed by Sanford T. Peyton for the honor of working the hottest party of the decade—at least here in Bayport.”

With that, Chet turned to another portrait hanging on the opposite wall. This one showed a teenage girl with light brown hair, wearing a white sundress and holding a Cavalier King Charles spaniel with huge eyes.

“His daughter Lindsay’s Sweet Sixteen!” Chet declared, pointing to the portrait with a flourish.

Chet and Joe were definitely psyched about this party. Too bad I couldn’t say the same for myself.

“You guys, we weren’t good enough to be invited to Lindsay’s Sweet Sixteen,” I said. “So why should we work it?”

“Two words, my friend, two words,” Chet said with a smile. “Food and—”

The only thing I knew about Lindsay was that she didn’t go to Bayport High with Chet, Joe, and me. Which was no surprise.

“Most of the kids at this party will be from Bay Academy,” I said, referring to the posh private school in Bayport. “And you know what they’re like. Total snobs—”

Chet cleared his throat loudly as the door swung open. Joe
and I jumped up from our chairs as Sanford Peyton marched in, followed by his daughter, Lindsay. Walking briskly behind Lindsay was another girl of about the same age. She had long black hair, and her dark eyes were cast downward at her own tablet she was holding. As she glanced up, she threw me a quick smile. I caught myself smiling back.

Hmm,
I thought, still smiling.
Maybe this job isn’t such a bad idea.

“Have a seat, boys,” Sanford said as he sat behind his desk, facing us. Lindsay and the other girl stood behind Sanford, looking over his shoulders at us.

As we sat back down, I could see Sanford studying the applications we’d filled out.

“I see you all go to Bayport High,” he said gruffly.

“Daddy, they’re cute, but not gladiator material,” Lindsay cut in.

The three of us stared at Lindsay.

“Say what?” Joe said under his breath.

“Gladiators?” Chet said. “I thought you needed waiters. You know, to pass around the pigs in blankets.”

“There will be no pigs in blankets at this party, boys,” Sanford said.

“What kind of a party has no pigs in blankets?” Chet asked.

“Daddy.” Lindsay sighed as she checked out her manicure. “Just explain.”

Sanford folded his hands on the desk.

“You see, boys,” he said, “the theme of Lindsay’s Sweet Sixteen is No Place Like Rome. Four strong young men dressed as gladiators accompany Lindsay into the hall as she makes her grand entrance.”

“You mean Empress Lindsay,” Lindsay emphasized. “And the gladiators will be carrying me on a throne designed just for the occasion.”

Joe, Chet, and I stared at Lindsay as she flipped her hair over her shoulder. Was she serious?

“For sure,” Lindsay replied. She turned to the girl with the tablet and said, “Sierra, make sure you get the music I want for my grand entrance.”

So her name was Sierra. Nice name for a nice-looking girl. I watched Sierra busily taking notes until Sanford’s voice interrupted my thoughts.

“If we do hire you as waiters,” Sanford said, “there’ll be a dress code.”

“You mean those sheets the guys in ancient Rome used to wrap themselves up in?” Chet asked, wide-eyed.

I glanced sideways at Joe, who didn’t look too thrilled either. Was this Sweet Sixteen really worth it? But when I turned to look at Sierra, I got my answer. You bet!

“Or some white tablecloths from our mom,” Joe added.

Lindsay tapped her chin as she studied us one at a time. She pointed to me, then to Joe.

“Those two can be waiters,” Lindsay said.

“Just me and Frank?” Joe asked, surprised. “What about Chet?”

Sanford didn’t even look at Chet as he went on with the party details.

“The Sweet Sixteen will be held this Sunday night, being that the next day is a holiday,” Sanford said. “That gives us a whole day on Saturday to prepare food, the decorations—”

“My outfits!” Lindsay cut in.

I could see Chet making a time-out sign with his hands. “Excuse me,” he said. “But what about me? Aren’t I going to work this party too?”

“Maybe,” Lindsay said. She turned to Sierra. “Put that one on the B-list. We can always call him if we get desperate.”

Sanford looked at Joe and me and said, “Well? Don’t you want your job instructions?”

I glanced over at Chet, who looked like he’d just been kicked in the stomach.

Joe stared at me before jumping up from his seat too. “Yeah,” he said. “Come on, Chet, let’s go.”

“Are you guys crazy?” Lindsay cried as the three of us headed for the door. “Do you realize how amazing this party will be? You never know who you might meet!”