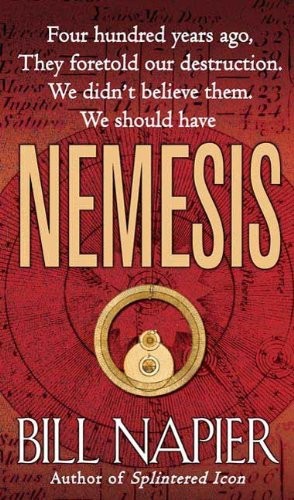 THRILLING PRAISE
FOR THE FICTION OF BILL NAPIER

“The most exciting book I have ever read.”

“It’s hard not to get sucked into Bill Napier’s incredible vortex. Truly an extraordinary tale, and one that throws the perfect bridge from England to the Americas . . . Sir Walter Raleigh’s da Vinci Code. More, it’s smart as hell. It reads like an exploding brush fire . . . what a ride!
Splintered Icon
is a really terrific novel, head and shoulders above the genre.”

“Intriguing and imaginative. An inventive piece of storytelling.”

This is a work of fiction. All of the characters, organizations and events portrayed in this novel are either products of the author’s imagination or are used fictitiously.

All rights reserved. No part of this book may be used or reproduced in any manner whatsoever without written permission except in the case of brief quotations embodied in critical articles or reviews. For information address St. Martin’s Press, 175 Fifth Avenue, New York, NY 10010.

Judge Dredd and the Angels of Doom

The Road to Mexico

shindig
[?] 1. a dance, party or other affair. 2. shindy, a noisy disturbance; commotion.

The meteor comes in high over the Gulf of Mexico, in a blaze of light which darkens the noon sun from the Florida Keys to Jamaica.

Two thousand miles to the north, and four minutes before he dies, Colonel Peter “Foggy” Wallis is in his office watching television. The office itself is dark and comfortable, a restful place. It is made of steel. It sits on springs whose coils are made from steel rods three inches in diameter. Steel walkways connect the office to another fourteen similar, self-contained rooms. The entire office complex is contained within a giant cavern hollowed out from a granite mountain. Steel pins up to thirty feet long are driven into the cavern walls, and steel mesh is suspended below the ceiling high overhead, to protect him from dislodged boulders should a hostile giant ever strike the mountain. Access is through steel doors, each weighing twenty-five tons, and along a tunnel fourteen hundred feet long.

The television picture comes from a camera twenty-five thousand miles above the surface of the Earth. It is beamed down into a huge antenna near Alice Springs, relayed across two oceans, cabled a thousand feet into the bowels of the Rock and then up into the colonel’s television set for his personal perusal.

The colonel pulls open a Seven-Up and sips at the fizzy
lemonade. An oil well is burning in Iran. Its long smoky trail, bright in the infrared, has been longer at every shift for days, and now it has at last reached the northern Himalayas. Otherwise nothing much has changed. He flicks a button and the black night-time Pacific now appears, ringed by lights. To the left, the Sea of Japan glows softly, illuminated from within by the lights of the Japanese shrimp fishermen. Hawaii appears as a central dot. Idly, he flicks a switch and the dot resolves itself into a string of coastal lights dominated by Honolulu on Oahu and Hilo on Big Island.

Suddenly the lights fail; the VDUs dissolve into snow and die. A chorus of surprised profanity begins to emerge from the dark, but almost immediately the lights flicker and come back on, and the screens return to life.

“Now what was that?” Wallis asks nobody in particular. Rapidly, he scans the screens, flicking through the signals from sensors on land, sea, air and space. They reveal nothing: no anomalies, no intrusions. On the other hand, power cuts have never happened before.

While the young major sitting to the left of Wallis speaks into a telephone, Wallis himself taps out a command on the console in front of him. A mass of coloured symbols obscures his god’s eye view of the world. He types again, and all but a handful of the symbols vanish.

Over the Barents Sea, just north of Novaya Zemlya, a patrol of ageing Tupolev Blackjack bombers is high over the pack ice and the seals; another three hours on that bearing and they would invade Canadian air space, heading south for the Kansas silos. A flock of MiG 23s is heading out over the sea of Japan: six hours, if only they had the range, and they would reach Hawaii.

Only ten minutes ago a big KH-11 satellite passed over Kirovsk on the Kola peninsula, recording the Badgers, Back-fires and MiGs which swarm like bees in and out of the four military air bases surrounding the city; elsewhere inside the
mountain, careful men watched their movements; they collated and analysed, using massive computers: alert for the unusual, paranoid towards the unexpected. But the computers detected no strangeness in the patterns, and the careful men relaxed.

For twenty years following the collapse of the Empire, Kirov has been a ghost city. The bees flew to distant Eastern bases, or were executed by order of disarmament treaties. Some of the careful men were reassigned to tinpot dictatorships; most left to take up lucrative jobs with McDonnell Douglas or IBM. They no longer collated and analysed. But then came the food riots; and the Black Sea mutiny, which spread like a plague first to the Pacific Fleet and then to the elite Tamanshaia and Kanterimov divisions; and the chaotic elections in which Vladimir Zhirinovsky, heavily supported by the Red Army, swept to victory. The man who had publicly threatened to nuke Japan and the United Kingdom, and whose declared intention was to expand the Russian Empire by force, was in the Kremlin.

And now the Badgers are back in Kola, and the careful men have returned to the mountain.

Stuff like that doesn’t bother Wallis in the slightest. It just makes his job more interesting.

A handful of dots appears on the screen, obtained at vast expense from hydrophone arrays sprinkling the seabed along the GIUK Gap, the choke-point bridging Greenland, Iceland and the Orkneys. A couple of ancient Yankees and a Foxtrot are heading out into the North Atlantic. Yesterday, the combat team followed a Typhoon heading north, twenty-four thousand tons of displacement whose signals were soon lost in the clicking of shrimps and the cry of whales.

The hell with it. There are no abnormal movements; the
computers are seeing no suspicious patterns. It has been a long shift, and the colonel, three minutes and twenty seconds before he dies, leans back in his chair, stretches and yawns.

It strikes ground in the Valley of Morelos, a hundred miles south of Mexico City. It is sparse, hard land, a countryside of dry, stony tracks, overloaded burros, maize fields and giant cacti.

In the time it takes Wallis to yawn the asteroid has vaporised, ploughed to a halt ten miles under the ground and generated a ball of fire five miles wide and a hundred thousand degrees hot. Shock waves carrying four million atmospheres of pressure race outwards from the fireball, ancient granites flow like water.

“Sir, the generator people say it was some sort of ground surge. It seems the national grid got it too.”

“Any reason for it?”

“They’re checking it out. There’s a big storm complex around Boulder.”

“The first sixteen years are the worst,” Wallis says.

In the time it takes to discuss the major’s baby the fireball scours out a hole fifty miles wide from the Mexican countryside. The hole is ten miles deep and a sea of white hot lava pours upwards through the cracked and fissured mantle. Around the rim of the big hole, a ring of mountains builds up from the torrent of rock. Molten mountains are hurtling into the stratosphere, leaving white-hot wakes of expanding air. The blast moves out over the map. Mexico City vanishes, an irrelevant puff of smoke.

The ground waves too race outwards from the hole, leaving a wake of fluidized rubble. The rubble is forming into ripples and the ripples, tumbling rocky breakers reaching five miles into the disturbed sky, roar towards Panama, Guatemala and the United States.

All the way up the Pacific seaboard the morning mists are
rolling in. Foghorns wail round Vancouver island like primeval monsters, a thick white shroud blankets San Francisco and the traffic is snarling up in downtown LA. But now electric currents surge overhead as the fireball pierces the stratosphere, rising back through the hole punched out by the asteroid, and electrons spiral back and forth between the Earth’s magnetic poles. Spears and curtains burst into the black Arctic sky and dance a silent, frenzied reel, while the frozen wastelands below reflect the shimmering red and green. Counterflowing currents surge over the Americas; cables melt, telephones die, radios give out with a bang, traffic stops in the streets.

Just over the border from Mexico, early morning shoppers in Tucson, Yuma and San Diego see long black fingers crawling up from the horizon to the south. The fingers reach out for the zenith. And as the shoppers stop to watch, the blue-white fireball too rises over the horizon like a bloated sun, and with it comes the heat. Everything combustible along the line of sight burns; and all living things along the line of sight crisp and shrivel.

The Mystery of the Merry Magician by Ellery Queen Jr.
The Pirate Lord by Sabrina Jeffries
Up in Smoke by Ross Pennie
An Island Called Moreau by Brian W. Aldiss
Dead Man's Time by Peter James
Infinity Blade: Awakening by Sanderson, Brandon
Empire Under Siege by Jason K. Lewis
A Home for Shimmer by Cathy Hopkins
Unashamed by Francine Rivers
Awakening the Fire by Ally Shields