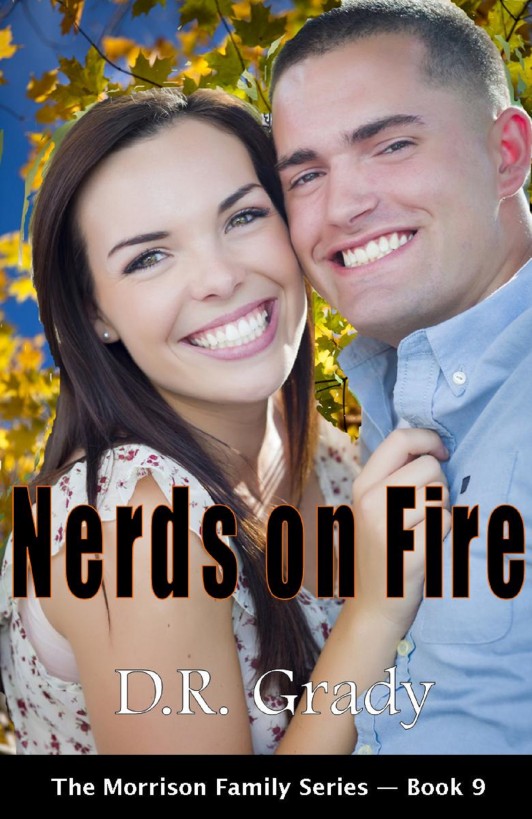 This book is a work of fiction. Names, characters,
and incidents are all products of the author’s imagination or are
used fictitiously. Known locales are also used
fictitiously.

If you enjoy this book, please buy a
copy for someone else to enjoy. Please do not download or buy this
from anywhere except where the story is offered legitimately. All
rights reserved - including the right of reproduction in whole or
in part in any form.

Please Note: While I had help with
this story from several knowledgeable sources, there are still
likely mistakes on my part. Authors also like to stretch and change
things to make their story work. So this book does not necessarily
reflect reality. I hope you enjoy it nonetheless.

I adore medical professionals and
admire them, obviously, since many of my characters end up being
members of the medical community.

However, I am not a medical
professional. This might become obvious throughout the story. :-D I
did conduct plenty of research for
Nerds
on Fire,
but there is always the potential
for error.

This is a work of fiction.
Everything in this book is purely a figment of my well exercised
imagination. I’m a writer, therefore chances are quite good that
I’ve tweaked events, skills, and reality to fit the story in my
head. All I wish to do is provide you with a few hours of
entertainment while feeling like a part of the family. I really
hope you enjoy reading
Nerds on
Fire
as much as I enjoyed writing
it.

To my dad, who we lost too
soon.

With Special Thanks
to:

Her heart beat far too fast. As a nurse
practitioner Beatrix “Trixi” Duvall knew this could be a problem.
In her defense, she had never encountered such masculinity before.
Nothing in her life had prepared her for the perfection of Mark de
Vosse.

“
How are you, Miss Duvall?”
he asked as he shook her hand at lunch. As per any unattainable
man, his voice was deep, masculine, and enticing. Why, oh why, did
she have a weakness for men like this?
Like all the others, he doesn’t recognize you’re an eligible
female
... that knowing voice
scoffed.

Katy Greene, her best friend, pointed
out nice men to her all the time, but Trixi continued to hold out
for something she couldn’t define. Until now.

Mark’s eyes were a blue-green much
like his younger brother Leo’s. It was obvious the two men sprang
from the same gene pool. Mark wasn’t quite as tall as Leo, who
stood well over six feet, but he made up for it in width. Leo was
wide as well, he had probably played football in high school and
college and done very well, but Mark could have played the entire
line himself. Her girly side sighed in perpetual wonder.

“
I’m fine, and happy to
finally meet you.” Trixi struggled to keep her professional smile
intact. It was far harder than it should have been.

His dark hair was shorter and darker
than Leo’s, whose hair always looked a little windblown. Leo ran
his hands through his shaggier hair occasionally. If Mark did so,
it would slide right back into place.

His jaw, like Leo’s, was square and
his lips were firm but kissable.

She all but groaned this
time.
Where had that stupid thought come
from?

He’s a neurosurgeon. They
don’t notice peons
, she barked at her girly
self who remained in an utter tizzy over this man. Of course she
was
—
he was
gorgeous, successful, and that looked like warmth in his
eyes.

They smiled at her now. “I feel like I
already know you,” he murmured as he released her hand. She hadn’t
noticed they held the handshake far longer than professionally
appropriate.

“
Leo talks about you a lot.
It’s nice to finally meet you.” Her answer came out polite and
smooth. One bonus from her uncomfortable, awkward early-adult years
was those experiences had created a gracious polish that now
carried her through even the most excruciating social
situation.

“
You might not think so
once you get to know him,” Leo piped up as he clapped Mark on the
back. She appreciated the affection and respect between the
brothers.

Their sibling closeness somehow
reassured her.

She turned to Leo. “Did you nag him
into coming here?” Here was The Central Derry Clinic, located in
south central Pennsylvania, near Hershey. Theirs was a smaller
hospital with a stellar reputation.

Leo tweaked her nose. “Of
course.”

Beside them, Mark laughed, and like
the rest of him, it was perfect. “He kept telling me how much nicer
it is to be home.” Mark glanced around the cafeteria where they
were gathered. He had started several weeks ago but her erratic
schedule made meeting before this difficult. She had yet to be
placed somewhere permanent so had even worked with Leo recently,
filling in until the paperwork for her dream job
cleared.

“
I reserve the right to
decide for myself.” Mark’s counter was accompanied by a charming
smile, directed at her. Her heart might have slid to the
side.

“
I’m right,” Leo repeated
as he stole some carrot out of her salad. And ogled the chocolate
she set at the ready.

“
Stop eying my candy bar.”
Her warning made Leo grin.

She cocked an eyebrow at him. “I did,
yesterday.”

She choked on her swallow of tea. Mark
leaned over to pat her on the back, with the perfect amount of
pressure. He also eyed her chocolate bar.

“
Not both of you.” Her
mutter increased their smiles so she tucked dessert back into her
lunch bag. It wasn’t big but was necessary for the health of those
working with her today.

The brothers shared a conspirator’s
look.

“
You could share it with
both of us.” Leo’s wheedling didn’t move her.

She pointed to the boxes conveniently
located by the cash registers. “They sell a nice selection right
over there.”

Mark swallowed some iced tea. “It’s
not as much fun that way.”

“
I know. So I stand firm.”
She wrinkled her nose at Leo.

He balled up his empty sandwich
wrapper. “You’re so tough, Duvall.”

“
Of course I am.” She
tweaked his nose this time and then brightened. “Did I tell you
Katy is coming?”

“
For good,” Trixi stated
happily, as the de Vosse brothers exchanged another look. Judging
by those twitching lips, she must have amused them,
again.

It was okay to be amusing, but it
would be much nicer to be so sexy she made men stop and stare. Or
ensnared them with a mere look.

Since neither was true of her
unassuming person, she at least consoled herself that she didn’t
qualify as invisible. So far. Trixi sighed and accepted amusing.
Maybe she should wear some of her really high heels to work. A few
women did. Then she winced at the thought of doing her active job
with aching feet, and nixed the idea.

Reluctantly, she also gave up on the
idea of sexy.

“
When is your friend
coming?” Mark finished his sandwich and then dumped his empty chip
bag. Nothing but a few measly crumbs tumbled out. He stared at them
glumly.

“
Katy arrives once her
fellowship ends, so soon.”

“
Does she have a place to
stay?” Leo peered into his own empty chip bag. It was sad to see
the two men still hungry and come up wanting.

She tugged out a different container
and opened it. The brothers groaned when the enticing contents
wafted toward them. Leo breathed deep. “Oatmeal raisin cookies.” He
helped himself and popped half the treat into his mouth.

Mark wasn’t far behind him. “With
plenty of cinnamon and other spices.”

“
I made them last evening,
but I don’t want these in the house.” She peered at them in
distaste.

“
You baked something you
don’t like?” Leo dug two more treats out of the
container.

“
I like them.” Mark
selected another one. It was big and he stared at it with
satisfaction before he demolished the fragrant cookie.

“
Of course I like them. I
thought I would put them out by the coffee pot.”

“
Your dad probably likes
these.” Leo held one up before he inhaled it.

“
He does, but I already put
some aside for him. I told him to hide the container so I can’t
find it.”

Leo grinned. “That doesn’t work very
well, does it?”

Trixi sent him a smoldering look.
“With the chocolate variety, no. I can find those with no problem,
no matter where he hides them. But it’s possible with these if he’s
creative.”

She took one and bit into it. The
cookie was soft, and the texture and spices blended perfectly. It
melted in the mouth. After she swallowed, she scowled at Leo. “I
cannot have these in the house.”

“
We’ll take care of them
for you.” Leo snapped the lid onto the container.

“
Then how am I supposed to
get to them?”

Mark ignored the growl in Leo’s
question. “If you hide them,” he pointed out, “certain individuals,
who have have access to your area, can therefore potentially find
them. If I hide them, they’ll be safe.” He glanced at the treats.
“At least from cute little brunettes. From me, not at
all.”

His expression turned warmer and she
wanted to sink into it. These blasted cookies weren’t anywhere near
the temptation this man posed. He ranked right up there with
chocolate.

This was bad. Really bad. And yet she
found herself falling headfirst anyway.

Wait
—
did he just call her
cute?

Clutching the cookie container, Mark
watched his brother and Trixi Duvall leave the cafeteria together.
She laughed at something his brother said and her animated face lit
up.

Mark liked her laughter. And her eyes.
And the way she smelled. The cookies he carried were also amazing.
Delicious, not over-baked, and one of the best cookies he’d ever
eaten. That was saying something since the Morrison family bakers
were professionals. Maybe Leo was right about him making the move
from Boston. It was good to be home.

Even if he did have to live with Leo
for a little while.

He needed to call the real estate
agent again to book more appointments to see houses. He needed a
place to live. Living with Leo was fine, but it wasn’t permanent
and he craved permanent.

The Morrisons were a close family, but
he wasn’t certain returning to the Morrison bosom was the smartest
of his decisions. Now he’d have nosy neighbors wherever he landed
in town. And you couldn’t tell an aunt or cousin to mind their own
business. It’d get back to Granddad and Grandmom and then there
would be serious problems.

He stored the cookies in his desk
drawer and then picked up the phone.

As he punched in the numbers, he
wondered if Leo was attracted to Trixi.

Love So Unexpected (The Lawson Brothers Book 6) by Marquita Valentine
In the Arms of Stone Angels by Jordan Dane
A Succubus For Christmas by M.E. Hydra
Never a City So Real by Alex Kotlowitz
The Walk by Lee Goldberg
Marazan by Nevil Shute
The Other Side of Silence by Celia Ashley
Theodore Boone: The Activist by John Grisham
Gaudete by Ted Hughes
Deep Fried Homicide (The Donut Shop Mysteries) by Jessica Beck