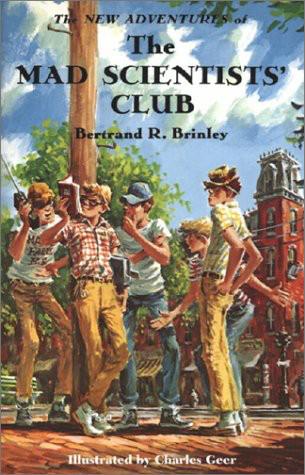 The New Adventures of the Mad Scientists' Club 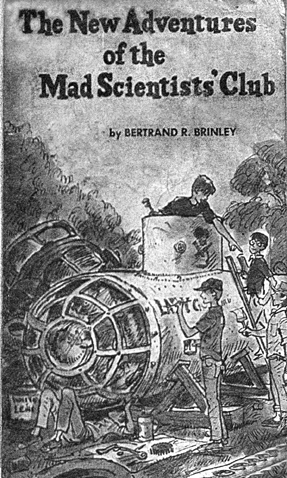 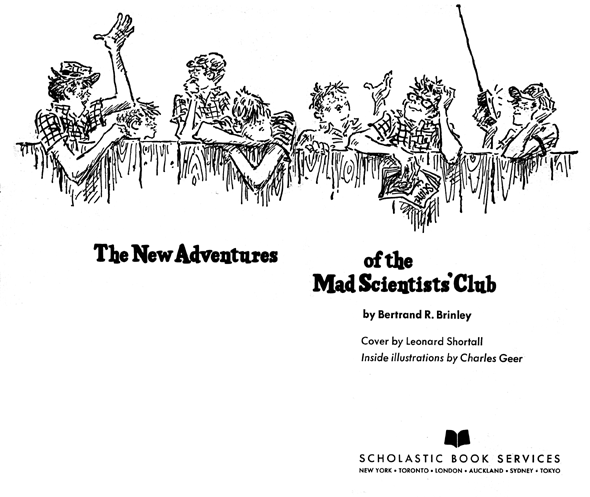 H
ENRY
M
ULLIGAN
has always had a generous supply of what is called
scientific curiosity. Sometimes it gets us into trouble -- like the time Freddy
Muldoon and Dinky Poore got kidnapped for being too nosy about something Henry
had discovered.

Henry is
a great one for thinking ahead, and he always has some new project planned for
the Mad Scientists' Club to work on during vacation periods. Last Easter we had
about ten days off from school, and he was all ready for it with a carefully
thought-out program to study earth tremors in the vicinity of Mammoth Falls. We
spent the first couple of days building seismographs that Henry had designed
and calibrating them in our clubhouse in Jeff Crocker's barn. It isn't very
difficult to build a good seismograph. Knowing what to do with it is something
else.

Most
scientific projects boil down to two things; some serious thinking and a lot of
hard work. In the Mad Scientists' Club we split it up evenly. Henry and Jeff do
most of the thinking, and the rest of us do the work.

The
seismograph project was no exception. Henry had figured out just where he
wanted to place the instruments so that we could develop a good record of the
pattern of earth movements around the Mammoth Falls area. He decided that we
should keep one in the clubhouse in Jeff's barn and make it the central recording
station where he and Jeff would analyze all the data we got. The other three
instruments we built would be placed in three distant points, so as to form a
large triangle with the town in the center.

Naturally, Henry had picked out three places that were hard to get to. But, as
I said, he and Jeff only had to do the thinking. The rest of us had to set up
the field instruments and then trek out to each one of them every day to change
the graph paper on the recording drums and bring the last day's data back in to
Henry.

We set
one up on the very top of Brake Hill and another one on the floor of the old
abandoned quarry out west of Strawberry Lake. The third one we set up on the
big stone slab that's used as the throne in the council ring on top of Indian
Hill. We had to get permission from the local chapter of the Daughters of
Pocahontas to do this, because they always use the place for their meetings
even though they don't own it. The ladies were very nice about it, though, and
decided they couldn't stand in the way of science. Besides, none of them could
think of any business they had to bring up at that month's meeting, anyway.

We had
to balance each instrument very carefully and make sure the main beam with the
bob on it was precisely leveled. Then we had to adjust the tension on the
recording arm so that it would make a good trace on the graph paper and still
not interfere with the free movement of the beam. All of this took a long time;
Homer Snodgrass and Mortimer Dalrymple did most of it, because they have a lot
of patience and like to work with fussy little stuff like dissecting flies and
soldering transistors in place and stuff like that. Freddy and Dinky and I do a
lot better on the big things like hauling rocks and digging and chopping down
trees. Freddy always says it's because we think big.

Anyway,
we just sat around chewing the fat most of the time while Homer and Mortimer
fussed with each seismograph. Then, when they were satisfied the thing would
work all right, we went to work and put a pup tent up over each one to protect
it from the weather.

Compared
to a lot of the other projects Henry had dreamed up for us, this one seemed
pretty dull. All we got out of it was sore feet and a sunburn. We'd make the rounds
of the seismograph locations each day and bring back three pieces of graph
paper with a squiggly line running down the center. It was always late in the
day when we got back, and we were usually pretty hot and tired. Meanwhile, Jeff
and Henry just bummed around the clubhouse all day, swapping jokes and eating
apple pie that Jeff swiped out of his mother's kitchen.

"O
Great Mogul! Would you mind telling us just what this is all about?" said
Freddy Muldoon one afternoon, as he plumped his ample bottom onto an apple
crate and mopped the sweat and dirt off his face.

"I
don't mind," said Henry indulgently, as he looked up from the graphs he
was studying and pushed his glasses up onto his forehead. "That is, if you
think you can understand it."

"Let's give it a try," said Freddy, unperturbed.

"Well, those 'squiggly' lines, as you call them, are a record of every
movement in the earth's crust around this area for twenty-four hours. With four
recording stations we can get a good picture of how strong the tremors are and
what direction they're moving."

"So
who cares?" said Freddy, fanning himself.

"A
lot of people care," said Henry. "Someday we might have a big
earthquake in this area. Who knows?"

"Big
deal!" said Freddy. "After all the buildings are knocked flat, we'll
know what caused it, huh?"

"Don't be a fat fink!" Mortimer Dalrymple chimed in from where he was
lying flat on the floor. "Sometimes I think you just don't know what
science is all about."

And that
was all that was said about the matter for several days.

But
Henry and Jeff did try to keep our interest up by showing us more of what they
were finding out from the graph traces we brought in. They had a lot of them
pinned up on the clubhouse walls that they intended to exhibit in their science
class when school opened again. The prize exhibits were the three sets of
traces that showed how violently the recording arms on the seismographs had
oscillated back and forth each time a dynamite blast went off on the banks of
Lemon Creek, where they were putting in the footings for a new bridge at Cowper
Street. The drums that we mounted the graph paper on for each seismograph were
rotated at a rate of one inch an hour by a little electric motor run off a
battery. Henry pointed out how we could calculate from the traces just what
time each blast went off, how long it took the shock wave to reach each of our
recording stations, and how strong it was when it got there.

But
Henry was proudest of the traces that he claimed showed the change in earth
vibrations when they turned on the reserve dynamos at the power plant late in
the afternoon and then shut them off again late in the evening. Henry said
anybody could detect a dynamite blast with his ear, but it took a pretty
sensitive instrument to detect a dynamo being turned on.

Even
Freddy and Dinky showed more interest in the project after that. Freddy has a
very active imagination, and he began dreaming up ways that soldiers might use
seismographs in combat to tell when tanks were coming, and things like that.
Every time he mentioned this Dinky would give him a great big raspberry, but
Freddy insisted it really wasn't any different from the way the Indians would
put one ear to the ground so they could tell when the cavalry was coming after
them.

On
Thursday, when we brought the latest data in from the recording stations, we
found Henry and Jeff poring over the previous day's tracings, which they had
taken down from the wall. Henry grabbed the new sheets out of my hand and
spread them out on the table excitedly.

"Look, Jeff! Here it is again!" he cried, running his finger down the
ink trace on one of the sheets. We all crowded around the table to see what
Henry was so hipped about. He ran his finger across to the time scale marked on
the margin. "See! It's the same time too. It starts about midnight and
ends about four o'clock in the morning. What do you make of it?"

Jeff
scratched his head and puckered his brow. "I don't know, Henry. It's sure
odd. But maybe it's just a coincidence."

"It
can't be a coincidence three nights in a row."

What
Henry was pointing to was a series of extremely small oscillations of the
recording arm that showed up in the ink trace at very irregular intervals in
the early hours of the morning. He spread out the sheets for the past three
days, and we could all see little peaks that had been recorded in the ink trace
during the same hours on each day. Then they stopped, as though somebody had
turned something off, and the line was smooth again. There wasn't any definable
pattern to the peaks. They just occurred at random during a four-hour period
and then disappeared.

"This is a real mystery," said Henry. "If these tremors were
caused by a piece of machinery or anything mechanical -- you'd think they would
come at regular intervals. There'd be some kind of pattern to them. But there's
only one thing regular about this caper. It starts at midnight and stops at
four in the morning."

"Maybe it's a drunk staggering home from a bar, and every once in a while
he falls flat on his face," said Freddy Muldoon.

"Stow it, Freddy!" Jeff Crocker warned him. "It wouldn't take
him four hours to get home."

"You
oughta be on television," sneered Dinky Poore. "You're almost as
funny as the commercials."

"How'd you like to work in my dad's service station?" Mortimer gibed
at him. "He could use a real gasser like you!"

"OK, you characters," Henry interrupted. "Maybe what Freddy said
isn't so stupid. Maybe he put his finger on the key to the whole thing."

"What do you mean?" asked Jeff.

"Whatever is causing these slight tremors is most likely human in origin.
That's what I mean," Henry replied. "Whether he knew it or not,
Freddy was
thinking
about the problem when he came up with the crack
about the drunk. Maybe it would help if some of the rest of us did a little
thinking too."