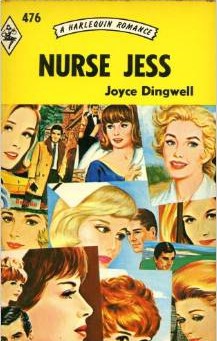 Margaret South, the most dedicated nurse at the baby hospital, and Professor Gink, Australia
’
s celebrated authority on baby care, seemed an ideal couple, and Jess plotted accordingly. Then she found she
’
d fallen in love with the professor herself!

Standing behind Barry, who was at the controls, and where, being a passenger, she should not have been standing at all, Jessamine knew that if the traffic tower at Mascot signalled a third circuit she would scream in the pilot
’
s ear.

Not that she did not love this city, wedded as it was to waterways that reached almost to its heart; not that she was unappreciative that it was perhaps at its most beautiful thus from the air; not that at any other time she could have refrained from picking out the wharves of Woolloomooloo, the span of the Bridge, the Great Southern Hospital from which she had graduated only three weeks ago a fully trained nurse
—but not now.

Not with her watch saying ten to three and her appointment at the Lady Belinda Hospital for Specialized Nursing of Premature Babies at four sharp.

Barry lifted the Lockheed cautiously above those several of the city buildings scraping acquaintance with the sky; far below, the streets seemed cool canyons; they should, the pilot thought wryly, ha
v
e cooled Jessa down.

But Jessamine was not cool. Her bright red hair that seemed oddly to grow brighter and redder when she was angry was positively flaring.
“
I
’
ve one hour and five minutes,
”
she stormed,
“
and you know the traffic snarls from Mascot into Sydney. It
’
ll take ages. I
’
ll be horribly late. Ba, put Matthew Flinders down!
”

His answering look told her clearly that he would have liked to have put
her
down, face down over his knee, a slipper in his hand.

“
You know the rules as well as I do, young Jessamine. You flaming little ass, get out of my hair.
”

His was red hair, too, almost as red as hers, and she had made it one of her many reasons never to marry him.
“
Our children would sizzle,
”
she had said.

He would not have minded if they had
exploded,
if only she had agreed one day to become Mrs. Barry Burns. She never had
... something resigned inside of him knew sadly she never would. But not sadly at this moment, by heaven. There was no regret in him now, only righteous wrath.
“
Get out of my cockpit, get back to your seat,
”
he yelled.

Jessamine still stood and looked at her watch.

Barry felt sorry for her even while he could have slapped her gladly. But for all his sympathy he still felt far sorrier for himself. For four years he had waited, in spite of her honest discouragement, for her graduation from the Great Southern Hospital. And then what had happened? Her proclamation of another training year in Sydney followed presumably by another graduation. Before her—and him
—
another nursing course.

At her announcement they had, every one of them, protested in chorus—Jessamine
’
s mother, Jessamine
’
s father, the few intimates—for Crescent was a small island—of their particular set. And himself, certainly himself.

“
Now look here, Jessa, isn
’
t it time you gave your old parents some of your company?
”
had reasoned Mr. Barlow.

“
Darling, you must be quite mad; Crescent will definitely be on the tourist map this season, all the Australian travel bureaux are pushing it, and then Sydney in August
—
ugh!
”
had gasped Vanda, whose father was in copra and who lived along the beach in a cool white house.

Roger, who was the only bank staff on the island so that they called him the Manager, had grimaced,
“
Signing up to nurse squealing little brats.
”

“
They
’
re too young to squeal,
”
Jessamine had said defensively.
“
They are quite dependent, quite helpless.
”

All that Barry had murmured was,
“
Oh, Jessa-my-Jess.
”

She had patted his hand kindly, but he had known then, as he knew now, that that was all there was to it, just a pat.

“
I
’
m lucky to have been accepted by Belinda,
”
she had marvelled.
“
I graduated Average Only from G.S.
”

Barry had thought to himself that she would never be that, Average Only. It wasn
’
t just the red hair, the bog
-
shadowy blue eyes, the way on vacations from hospital she would dog-paddle with the island picaninnies, one of a shoal of little brown fish, it was Jessa herself.

If she had been Average Only she would have been stopping on at that semi-tropical paradise, revelling in the new glamour and excitement that would come to her father
’
s inn now that it was to be no longer simply an island traders
’
rest but a holiday hotel.

She would have been conducting tourists out in glass
-
bottomed boats to look down on exquisite coral castles and caverns, on blue and orange and gaily-striped fish.

Perhaps Mr. Barlow would have asked his daughter to take visitors to watch the coconut weaving; there would be no one better versed to relate the fable of the island
’
s sleeping volcano, Lopi, with its eternal, internal fire; no one lovelier to start the dancing at night on the verandah of the Jessamine Hotel.

Thinking over this last, Barry had become a trifle mote resigned to the new course. The Barlows
’
inn, that had taken its name, like the Barlows
’
daughter, from the island
’
s fragrant flower, had a romantic setting, and perhaps Sydney might be safer than a yellow moon and silver stars as you played hostess to vulnerable male guests.

Particularly the Sydney where Jessa would be planted, the darling idiot. There should be no risk in a hospital for specialized nursing of premature babies, a hospital, Barry had gleefully learned, where the only men were those small ones still dependent on the security of big safety-pins. For the Lady Belinda had women for its doctors as well as for its matron, sisters and nurses; it was female, Jessamine had reported proudly,
“
to the core.
”

Not that Jessa was a feminist, far from it. During her four years at the Great Southern she had had her share of hospital romances—more
t
han her share, Barry had often thought.

There was that interne she had brought back with her last Christmas, a tall fair number with a little moustache. Yet he had proved a likeable bloke, and when it had become apparent that he and Jessa were strictly only friends, Barry had quite warmed to him. On the way back to Sydney he had let him travel in the same cockpit as Jessa travelled in now, a thing that couldn
’
t happen in a big airline, but the Crescent Island Service was different, of course.

To begin with it was his, Barry
’
s. His grandfather had carried the residents, or any visitors, to and from Australia in his boat the
Matthew Flinders.
His father, seeing the way of things to come, had discarded sea travel and bought an aeroplane, the
Matthew Flinders 2.
Barry had taken up the reins, or rather controls, though in a modern aircraft. It was in
Matthew Flinders 3
that they now travelled, but there would never be, thought Barry sadly, a
Matthew Flinders 4.

In the curious way that fate makes of one place a city but another a hamlet, Crescent Island had been destined to emerge from its trading chrysalis and become a tropic or rather semitropic paradise, a small Hawaii, some thought.

That might be all right for some Crescent Islanders, but not for Barry. He had been offered the position of first pilot on the luxury sea-plane that would cater for the tourists by landing directly in the harbour instead of, as Barry had done, several miles away on the small air-strip, but it also meant goodbye to
Matthew Flinders.
This, he had already told Jessa, was possibly the last trip.

She had been sympathetic and a little indignant. None of the islanders were very anxious for fame. Vanda admittedly had leaned a little to the idea of floral leis and strumming guitars and interesting male visitors, but perhaps one couldn
’
t blame her. She was young and pretty, and Barry was so obviously earmarked
“
Jessamine,
”
and the Manager was only doing a bank term of two years and would presently be gone.

Mrs. Barlow had been horrified. Hers had been a pleasant existence of waking up to Benjamin the boy bringing in early coffee, to gazing through one window at the little wooden mission on the hill and through another at small boats riding beyond the reef.

Now there would be people waiting for the bathrooms, she presumed, probably striped umbrellas on the beach, all that sort of thing. She really thought it unfilial of Jessamine to have deserted at such a moment. Jessa privately thought so, too. She worried for Daddy as well, dear Dad, so suddenly—and unhappily—to become a holiday hotel proprietor. She knew both Mother and Father could have done with her now
...
but she also knew something else. She knew that she wanted A Thing out of life—she had put it in capitals—she wanted it badly. She had been groping restlessly around that final year at the Great Southern, wondering what it was, when and where would come the indication, and then Margaret, dear gentle Margaret, had pointed the way.

The gang had been sitting in Mavis
’
s and Rene
’
s small dorm, some on the floor, some on the beds, one tomboy on the mantelpiece (that had been Jessa, of course), but all of their hospital vintage not working Nights had been there.

Mavis was marrying a day after Grad. Jennifer was marrying, too. She had entangled Barry
’
s
“
tall fair number,
”
the likeable interne who had travelled back from Crescent Island in the cockpit with him.

Rene was stopping on at Great Southern. She—with Margaret South—had always shared top marks, and she had been bespoken already by the Board. She grew dreamy when she thought of a veil instead of a cap, a brave red cape. And being Sister instead of Nurse.

“
In an outback medical centre a graduate is a matron, no less,
”
she had revelled.
“
I
’
ll probably go round some times with the Flying Doctor. I
’
ll be
terribly important and looked up to.
”

“
I
’
ll be richer still, I
’m
putting my capital into a popular private hospital,
”
had gloated Miranda.
“
I
’
ll charge through the neck for every adhesive plaster. Any of you kids can come when you
’
re sick, but bring your bank books, of course.
”

Della was going to be Sister in a big factory, Dinah was going on a ship.

Jessamine had sat very still, groping, groping ... Start a
cl
inic at Crescent Island, was that it?

She had thought of the islanders, disgustingly healthy; of the natives as healthy again; of the picaninnies, brown and bonny, and of the way they arrived without any to-do or fuss. She had thought of the doctor who did Crescent Island along with Palm, Heron, Haven and Halfway, and h
o
w he always complained there wasn
’
t enough work for one. No, not an island clinic, she thought.

And Jessa had known it was Belinda too, for her.

“
Do you think
I
could make it?
”
she had asked eagerly
—
for her marks, as they all knew, were invariably well down Margaret had said,
“
Why not? They certainly need trainees, Jessamine,
”
at the same time as Mavis and Rene had exploded,
“
You ass, Jessa, Belinda
’
s a
tyrant
for discipline, everyone says so, and you
’
ve already had four years of that.
”
Jennifer had warned.
“
You
’
re considered a pro all over again; it makes no difference that you
’
re a graduate.
”

So this was it, then; this was the Thing she had felt; this was what she had been groping for—and had found.