One Funeral (No Weddings Book 2) 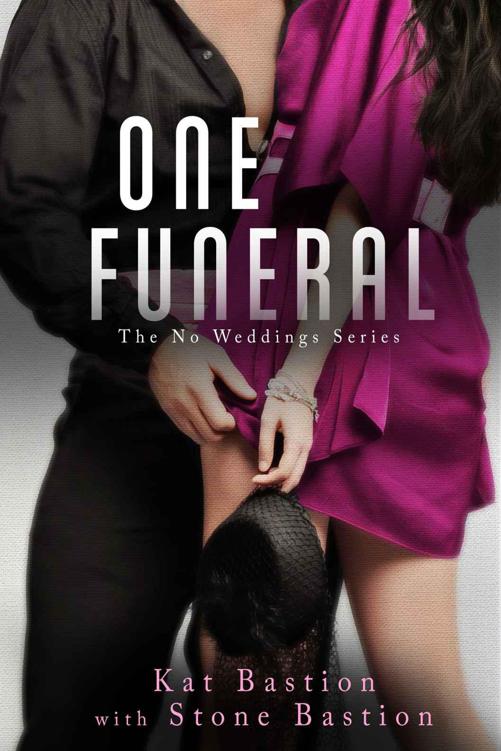 Forged in Dreams and Magick

Bound by Wish and Mistletoe

Born of Mist and Legend

Found in Flame and Moonlight

For those who forge on to find love…

C
ade slid his soft lips over mine.

Brushing, teasing, he sent me to the brink of aching need with the gentlest of care before pressing more firmly—hungry, growling, taking, and giving.

Without warning, he eased back, barely touching me. The slightest whisper of lips dragged across mine.

Until he did it all again.

My body caught fire from the inside out as I stood in my doorway, kissing him good night.

Our first kiss. Well actually, technically, the second, since our first amazing kiss was only a moment ago. But if we didn’t break away soon, it could very likely be the last kiss I would ever have. Devastating and all consuming, his tender but firm lips set my heart pounding so hard, I was in peril for my life. Death by kiss.

“Hannah.” He murmured my name against my lips, thundering a tremor through my body. When he pulled away for the last time, he braced his muscular body against the doorframe, gazing at me with molten heat. His chest rose and fell with rapid gulps of air.

His piercing eyes had darkened to bluest midnight. A lock of dark hair had fallen onto his forehead, and although a part of me wanted to brush it back, the energy flowing from him nearly vibrated, warning me to keep my distance. The muscles in his arms and legs shook, like he only held himself together by the barest threads of restraint.

He swallowed hard, then took a deep breath. “Our first date—tomorrow night.”

Unable to find my voice, I gave a slow nod. He was verifying the offer I’d made only moments ago, in the heated rush between kisses.

“Tomorrow then.” Reluctant words held both promise and threat. That he would be back for me. That we would do this again, ebbing and flowing like ocean tides, drawing closer, wanting each other, but pulling back, fearful we might train wreck the whole thing before it began.

Actually, that last part came from me. I’d been an emotional disaster since my ex made an unwelcome appearance back in my life. A near meltdown occurred where I’d become afraid of everything, the soundness of my decisions most of all. Cade, with his intuitiveness, had pointed that out. A relationship-crash survivor just like me, he’d been there. He promised to guide me along the bridge of fear until we both made it to the other side, together.

I sucked in my lower lip, tasting beer from the mouth of a man who stared at me like he’d found what he wanted most in the world. The man destroyed me and saved me, all at once.

“Tomorrow.” My word came out barely above a whisper, my voice still lost in his kiss.

On a nod, he shoved away from my doorframe and turned, disappearing into the darkness of my drive. His motorcycle flared to life with a roar, and I watched until his taillights turned at the street then sped off into the night.

I brought my fingertips to my lips as I closed the door, feathering over the place Cade had last touched me. The one small point of contact had the impact of a wrecking ball, permanently marking me with cracks and fissures all the way down into my bones.

I’d never been kissed like that before, where nerve endings sizzled from head to toe. I sucked in a deep breath, legs still shaking, between them throbbing.

Cade Michaelson was a force of nature.

If I was to survive the storm, I needed a better umbrella. And galoshes.

All night, in the quiet space of my bedroom where sleep always came easy, I stared at my ceiling until dawn. Restlessness spiked my blood, and I couldn’t calm down.

I couldn’t stop obsessing about every little thing regarding my tumultuous love life, both the good and bad: the intoxicating feel of Cade’s mouth; getting jilted at the altar by an egotistical asshole; how different Cade was from “Dumbfuck,” as Cade had dubbed my ex. But the longer I tossed and turned, the more I worried about how charming Brandon had been in the beginning too. I stressed my stomach into knots, worrying Cade would become just like him—and that I had no skills whatsoever in choosing guys.

Kicking the covers off my too-hot body, I abandoned the bed; lying there any longer was pointless. I shimmied into a pair of comfortable jeans and a T-shirt, pulled my hair up into a high ponytail, grabbed my jacket and keys, and left.

As I rumbled down the quiet streets of Glenhaven while everyone slept in on a Saturday morning, a usual flash of guilt fired through my brain as I passed by smaller homes close to the street. Traffic had to bother them, and although I’d grown certain they were used to it, a muscle car vibrating windows at 3:40 a.m. had to be a special kind of nuisance.

“It’s okay, Josephine. You can’t help it.” I stroked my hand along the edge of the dash in loving memory. Granpop had always loved this car, his shiny black ’67 Mustang Fastback. He often said Josephine was the only love affair he’d ever had outside of Gran. That was why when he died, Gran refused to part with it. And why when she died, it became
my
beloved Josephine—something they’d both loved that I now cared for.

I turned down the empty street lined with manicured trees growing out of artistic wrought-iron bases. Two blocks in, I coasted into an angled parking space and cut the engine. Closing the heavy car door as quietly as possible, I stood in front of one of my favorite places to be this early in the morning, before any other shop and restaurant owners arrived, and reflected on the day almost three months ago when I’d signed the lease on this place, imagining the possibilities.

And now I stood tall, amid other successful businesses, beside my grandparents’ beloved car, in front of my dream. Sweet Dreams. A blended design of old-timey soda shop and modern-day coffee lounge, the cupcake and cake bakery had become my home away from home.

Tiny leaves rustled as they tumbled down the cobbled sidewalk, the last vestiges of winter as March pressed on with spring. The early morning had a cool bite to the air, but I inhaled deeply, welcoming the fresh scent after an overnight misty rain.

I stepped up to the front door and closed my eyes as a flashback hit me hard. The day I’d met with Cade to learn how to market my new business, he’d caged me in this entry, much the same way he’d done last night. Only then, the shock of our attraction had caught us both by surprise—neither of us prepared for it, or able to do anything about it. Unlike last night.