Only the Good Die Young 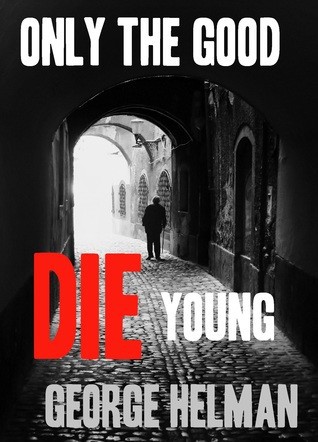 ONLY THE GOOD DIE YOUNG

Not So Noble Books

When you’re driving it is quite hard to spot them. But there! There’s one. I pull onto a side street. What looks like a sweet little old lady walks slowly along pushing a shopping trolley. Yeah. She’s the one. Shitting old biddy. Time I grabbed a granny. I stop and get out of my van.

‘No thank you. I only live around the corner and I enjoy a walk.’

She’s onto me. I look round. No one is coming.

I pull out my knife.

She jumps and rustles for her bag. She takes her hands off the shopping trolley and she’s mine. I put my hand over her mouth. It’s disgusting. I can feel her false teeth move. She gags. Nasty shit. I’ve got a tight hold and I drag her into the back of my van. I let go of her and she screams, spitting out her teeth. I shut the door and off we go for a drive.

We drive round and round for a bit because I need her to get tired of screaming. Then, when she’s finally shut up, I drive to my lock up.

I reverse into the driveway. I’ve made it so as no one can see me come and go. This has been two years in the planning, I can tell you. I open the garage doors. Turn on the lights. I carry her. She’s heavy, all lumps and bumps, but that weight training paid off. I throw her to the floor and close the garage doors.

‘You think I believe that? How old are you?’

‘Exactly. How do you think you’d have lived this long if you weren’t involved. Don’t think I don’t know what you did.’

‘I don’t know what you’re talking about. My age has nothing to do with it. My old mother lived to 102.’

I’ve had enough of her talking. I pick up the wallpaper steamer I’ve left on all night. She tries to get up. She tries to run. But I push her down again. I press the steamer to her face. She screams. I can hardly pull it off. Shitting old skin is stuck to it. Half her face has ripped off. I burn her arms too.

She doesn’t say anything. I pull away her blouse. I press the steamer to her chest.

‘Come on. Apologise,’ I say. ‘Admit you were involved in murdering my mother.’

‘I didn’t know your mother,’ she says.

I press the steamer harder.

She passes out. I try to open her eyes but I just see white and blue veins. Where’s her eyeball gone? Old people are freaky.

I can’t do much with her in this state. I tie a scarf round her mouth to stop her screaming and tie her to my workbench with strong rope. She’s still breathing.

Her false teeth are on the floor. I pick them up, they feel rank. I use them to bite her. I bite her nose. It’s hard to use the falsies but I wouldn’t use my own teeth on her. Blood runs from her nose. She wakes, choking. She coughs great coughs. She can’t breathe through her mouth and she can’t breathe through her nose. I watch her try. I watch her die. When she shudders her last, I put on my stereo to Magic FM. I dance around the garage. I’ll sleep here tonight. Tomorrow morning I’ll get the next one.

Soon as I walk in I can smell it. The smell of hospital, clinical disinfectant, smells like old biddies. Nasty shit. It’s 7:12. I can see my phone because my eyes are good. Shitting old people can’t see that. Shitting old biddies make me sick.

In the cafe there’s loads of them. They sit there, claw-like hands holding sticks and Zimmer frames. Hospitals stink. I wouldn’t be here if I didn’t know the government would get me first. I’m going to avenge my mum. She didn’t deserve what they did. Shitting old biddies hunt in packs, that’s the problem. They’re not very often on their own.

I’m in luck though. I’ve spotted one. His skin is gaunt and his liver spots make me gag. I reckon I can take him. He’s spindly enough. He’s looking over at me. Hehe, friendly one is he? He nods. I nod. He sips his tea with his sickening shaking hands. Yeah, he’s the target. If he reckons he can get the better of me he’s off on one. I’m Richie Henders. No government conspiracy will be enough. I’m going to win this.

I’m behind the newspaper ignoring him. I’m ignoring the cafe with the clatter of mugs and shitty cracked voices talking about their next operation. They'd better die on the operating table or I’ll get them instead. This is going to be the greatest revenge of a lifetime. Shitting old people will soon see they shouldn’t have lived this long. Living this long simply proves to me, Richie Henders, that they were part of it, part of the scheme that killed Mum, part of the scheme.

He’s thinking I’m just a random. He’s thinking I’m not watching him. I see him look at the clock above the counter. It’s 7:50 I want to shout. He begins to stand. I’m going to put a timer on this one. He struggles with one hand on his stick and the other on the table. Dirty old man. I hope he washed his hands before he touched anything. Probably can’t wash his own hands. Probably needs the nurse to do it.

‘Thank you young man,’ he says. ‘I’m going for my gall bladder appointment.’

‘Gall bladders!’ I say. ‘You’re in the wrong building. I work here. I know. Follow me I’ll take you out to the other part of the hospital.’

The man looks at me, totally confused. He looks like he might want to argue. I smile with every bit of charm I’ve got.

‘Don’t matter what your letter says. The gall bladder clinic is definitely not here. Look mate, I’ll do you a favour. I’ll take you over there myself.’

We walk down the corridor, back towards the revolving doors of the hospital reception area. I take him out. He’s like a loyal puppy following me, slowly, too slowly. I want to speed up. I want to get him in the van. But I need to be patient. I’ve got him now.

‘Gall bladder clinic’s over by the car park,’ I say. ‘They separated it off not long ago.’

I almost want to take him by the arm and pull him along. I’m not touching him though. He might get funny if I touch him.

We reach my van.

I bend down, get my keys and click the electric lock. I turn towards him and swoop up, grabbing him by the waist and I open the door with my other hand and I chuck the bastard in. Job done. Then all I need to do is lock the door, get quickly round the front, and drive off.

The van is well insulated, I made sure of that after the last one. Now we’re at the traffic lights, I can hear him scream, but I don’t reckon anyone else can. There are no pedestrians looking strangely at me. I turn up the music and as the lights change, off we go.

The 9 o’clock news comes on the radio. There’s no mention of a missing old biddy. I haven’t been seen. I drive the van in the parking space outside the garage backing up so that the doors are close to the garage. I jump out. He can tell we’ve stopped.

I can hear him crying. Soft git. I open the garage door. I turn on the fluorescent light. It flickers. Next thing I know, the light’s gone out. Great. The bulb’s gone. I’ve got a torch somewhere. A good solid one for hitting shitting old men.

‘It’s alright old man,’ I shout. ‘It’ll all be over soon. We’ll soon extract that gall bladder of yours.’

‘Lost your stick have you?’ I ask.

I pull him along the floor, get him in the garage, close the doors behind us.

‘Why are you doing this?’ he says.

‘Huh,’ I say. ‘Like you don’t know. If you think you can convince me that you weren’t part of the government experiment, you’ve got another think coming.’

And he’s all wide eyed, like an innocent baby.

‘Before I retired-’ he says.

‘Exactly,’ I say. ‘Before you retired. My Mum didn’t get to retire. She was an experiment. I know you old people. You were all in it together. If you weren’t, you wouldn’t have lived this long.’

‘But I was a clerk for an accountant. I never worked for the government.’

I’ve had enough. This old man thinks he can lie his way into living even fucking longer. I push him into a chair and tie him up.

‘My daughter will be looking for me,’ he says.

‘My daughter will find me,’ he says.

I hit him round the head with the torch. He cries out. Ha. It’s fun. It’s fun hitting him. I’m going to do it again. Ha.

That was easier than I thought. I’ve killed another one. Lots more to go but it’s a start. Go, Richie, go. Mum must be proud from her grave. I can feel it. She’s proud of me. I’m avenging her.

I pick up the old man. I put him next to the other one. For now, they can stay at the back of the garage. Ha. I open the lid to check he’s dead. He is. I open the garage door to the light of the day. I take out the photo I have of Mum and stroke her young face.