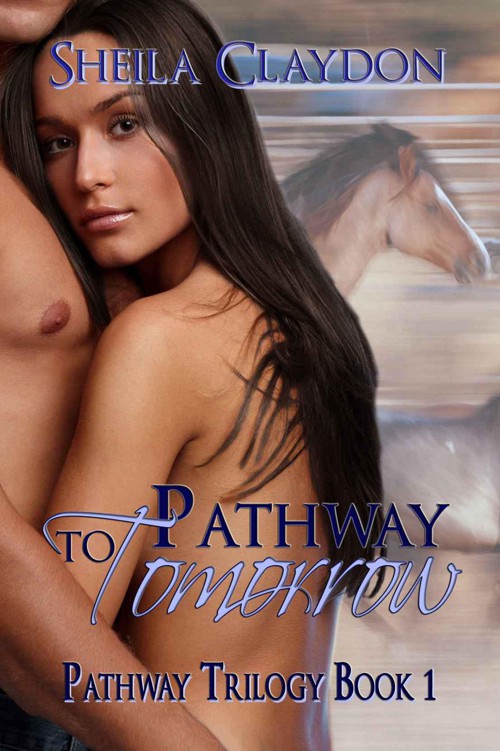 For
The Red Stripe Band who, unwittingly, triggered this story.

Thank you for the music

It is important to get it right when dealing with such sensitive topics as Autism. If I have managed to do this then it is entirely thanks to Lesley Fleming who is passionate about the potential of people with autism and who works tirelessly to make it happen. She read the manuscript of this book several times and her comments and suggestions were invaluable. Through her, Luke came alive.

My thanks also to the Riding for the Disabled volunteers who let me watch them at work and, just as importantly, allowed me to make a fuss of their wonderful horses.

“Watch me,” the man in the yellow fluorescent jacket barely glanced at Jodie as he snapped the heavy padlock shut, closing off access to the bridleway.

Reining in Buckmaster to steady him, she tried to explain. “But you’re not allowed to close it. It’s a public footpath as well as a bridleway, and....”

He interrupted her with a shrug.  “I don’t make the rules Miss. I just do what I’m paid to do. You got a problem with that, then talk to the boss.”

“I would if I knew who he was,” she could feel her temper beginning to flare.

The man jerked a thumb over his shoulder as he started to walk away. “Him what’s having the house built.”

Jodie looked in the direction he’d indicated.  There was nothing there except a dense tangle of undergrowth and a copse of windblown pines. With an exclamation of annoyance she wheeled Buckmaster around only to find the workman had disappeared.

“Now what do we do?” she asked the large chestnut gelding who was waiting patiently for his morning gallop. He twitched one ear at the sound of her voice and then skittered sideways as a flurry of leaves blew around his ankles.

She kicked her feet out of the stirrups, slid to the ground, and looped his reins over the gatepost. “Don’t worry gorgeous boy.  You’ll still have your ride. I just need to do something first.”

In less than a minute she had climbed over the gate onto a sandy path and forced her way past brambles and weeds to where a derelict building crouched under a gloomy canopy of misshapen trees. With a hiss of pain as a rogue plume of gorse scratched her hand, she retrieved her riding crop from where it had become entangled in a bush, straightened up, and stared at the old farmhouse. It stared right back, its boarded-up windows giving it an air of blank disregard for whatever fate was awaiting it. And fate certainly had plans if the scaffolding piled against the walls was anything to go by.

Picking her way through a scatter of fallen roof tiles, she walked across to where the old trees creaked and moaned above the fast encroaching undergrowth.  It was dark and gloomy and smelled of damp and decay.  There was nothing else though.  No notices on the door announcing its imminent destruction. No labels on the scaffolding. Not even a phone number she could call.

As she turned to go back to Buckmaster a splash of color caught her eye.  Blue paint.  The tree nearest to her was circled with a band of blue paint about a meter from the ground.  She walked a little further into the wood.  There was another one.  And another.  She lost count before she reached twenty.  A lot of trees were going to be felled, but for what?

Buckmaster gave a welcoming snort when she re-emerged shaking burrs and a couple of small insects from her clothes. She started talking as she walked towards him.

“We’ve work to do Bucky. Someone has bought the old farmhouse and we need to find out who it is. I don’t care what happens to the house, or to the woodland, and neither would you if you could see it.  It’s far too spooky for you. You’d do your prancing about, rolling your eyes thing if I took you in there. I do care about the bridleway though. That’s why we have to find out who’s bought it, and go visit them. We need to tell them they can’t lock us out.”

She had clambered over the gate while she was speaking and now she rubbed the white blaze on his forehead. He pushed his nose against her shoulder and blew gently into her ear. She laughed as she seized his reins and with a cursory touch to the stirrup, leapt onto his back.

“I knew you’d see it my way.  Now let’s find another route to the beach. You’ve waited quite long enough.”

As she guided Buckmaster around and then paused to check for traffic, a tall man muffled up in a thick padded jacket and wearing a wool beanie on his head, climbed down from a parked 4 x 4 and walked towards her.

“What’s going on here?” he asked with a frown.

“Someone’s bought the old farmhouse,” Jodie told him.  Then, noticing he had a dog sitting in the back of his car, she shook her head.

“You can’t walk your dog down the path anymore. Nobody can. Whoever owns it seems to think it’s okay to close the bridleway, but don’t worry, I intend to find out exactly who it is. I’ll make sure it’s opened up again even if I have to chain myself to the gate.”

Kicking her legs against Buckmaster’s flanks, she trotted off down the lane without waiting for an answer.

The man stared after her in irritation.  He didn’t seem to have handled that very well.  When he’d asked the girl what was going on he had expected some sort of lame excuse; an embarrassed explanation as to why she was clambering back into the lane over a locked gate.  Instead she’d been angry and said something about organizing a protest. Then she’d ridden off without a backward glance. He gave an inward groan. A stroppy teenager threatening to stir up the locals! Just what he needed! He was going to have to get some No Trespassing signs put up as soon as he could.

He walked back to his car and lifted down a very old dog, making sure it had full control of all four paws before he let go.

“Come on Blue. Time to see your new home.”

The dog, a dusty looking black Labrador, wagged its tail and then waited patiently while its master searched in his pocket for t
he key to unlock the gate. Then it followed him along the roughly cleared path that Jodie, in her impatience, had missed, until they could both see the house.

“Haven’t any of you heard anything?”

Jodie was sitting at the old wooden tabl
e that was the focal point for everyone who worked at the riding school; the place where they left messages for one another, dumped their belongings, or grabbed a mug of coffee when they had a moment to spare.  Jodie was drinking coffee now; or rather she was stirring her coffee round and round while she addressed the people in the room in general, and the girl sitting next to her in particular.

“Nothing! Nix! Nada! I already told you,” Carol shook her head in exasperation.  “For goodness sake Jodie, don’t get so worked up about it.  I’m sure it’s just a misunderstanding.”

“Misunderstanding!” Jodie’s voice went up several notches. “How can anyone misunderstand a bridleway? And it’s a public footpath too don’t forget. Understanding that both of them have to be kept open is hardly rocket science.”

“I guess…but it’s still not worth getting into a state about something that can probably be put right by a call
to the local council.”

“You reckon?” Jodie didn’t share her assistant manager’s faith in authority.  It had let her down too often in the past.

“Yes! And I’ll prove it to you,” Carol reached behind her to where a pile of local telephone directories were stacked on the windowsill, selected the one she wanted, and began to rifle through the pages.  A moment later she was punching a series of numbers into her cell phone.

Jodie listened to the ensuing conversation without hope and when, after several minutes, Carol finally cut the call, she gave a resigned shrug.

“The man I spoke to said they were aware of it,” Carol protested.

‘He didn’t say they were going to do anything about it though, did he?”

“Well no.  Apparently it’s not an official bridleway, or a footpath for that matter. He says the new owner is quite within his legal rights to close it.”

“Even though everyone who lives around here has been using it for years?”

“Yes. The family who used to own the land didn’t care who used it but apparently the new owner does. The man at the council said he values his privacy or something like that.”

“Well guess what? I value my bridleway, and so should you…all of you! So what are we going to do about it?” Her eyes were fierce as she looked around the room.

Before anyone could answer her the door swung open and smacked against the wall with a thud.  Five heads swiveled, and then five pairs of eyes opened wide as a gawky teenager wearing a spectacularly ugly school uniform fell into the room.

“Sorry folks! Not at all the entrance I was aiming for.” The girl picked herself up with a wry grin and untangled her feet from the heavy school bag that had tripped her.

Kicking it under the nearest chair she seized Jodie’s mug, swallowed a mouthful of coffee, and helped herself to two oatmeal cookies from a tin that was open on the table. Then, spraying crumbs, she said the one thing destined to gain the attention of everyone in the room.

“Did you know that Marcus Lewis is moving into the village?”

It was several minutes before Jodie could make herself heard over the excited buzz in the room.  When she finally did, everyone stared at her in disbelief.

“Who is Marcus Lewis?” she asked.

Coughing over a crumb that had gone down the wrong way, Izzie rolled her eyes and shook her head speechlessly, leaving Carol to answer.

“Don’t tell me you’ve never heard of him,” she pleaded. “He’s a jazz pianist, or at least he used to be. You must remember him.  In his heyday he won every award going.  I don’t know why he stopped performing but he’s still a huge part of the music scene. He’s written stuff for everyone and he’s composed some fantastic film scores too.”

Jodie shook her head. “I’ve never even heard his name before.”

Then a new thought struck her and she swung back to where Izzie was sitting on the edge of the table, still red in the face from her coughing fit.

Less Than a Gentleman by Sparks, Kerrelyn
Practical Widow to Passionate Mistress by Louise Allen
Battleborn: Stories by Claire Vaye Watkins
The Spirit Path by Madeline Baker
Trouble With Harry by Katie MacAlister
My Soul To Take by Madeline Sheehan
Hell's Phoenix by Gracen Miller
The Good Life by Susan Kietzman
So Long As You Both Shall Live (87th Precinct) by McBain, Ed
Ride a Painted Pony (Superromance) by McSparren, Carolyn