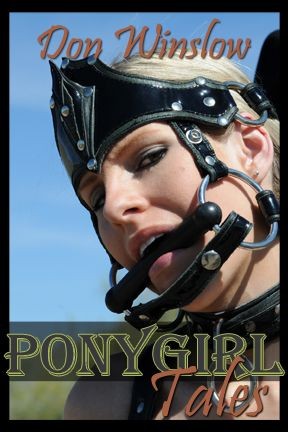 Blaze at the Races

But Weekends Are Mine!

The Mistress of Rosedale

With the exception of quotes used in reviews, no part of this book may be reproduced, stored in a retrieval system, or transmitted in any form, by any means, including mechanical, electronic, photocopying recording or otherwise without prior written permission of the publishers.

I once came across a lady writer whose fascinating stories once graced the internet. D. would bury herself in her work, writing furiously for several days before emerging to present her newly-completed story to her male companion for his comments. One day, in the grip of the muse, D found herself writing about a naked girl who is made to pull a wheeled cart. Her companion read the piece and looked at her.

“D, he asked, “did you know you just wrote a ponygirl story?”

“What’s a Pony-girl story?” she replied with perfect innocence.

Justine, not her real name of course, but the name she had been given, was her Lordship’s favorite…and she knew it. Lord Basil Edgewater instinctively knew when he first laid eyes on the girl, instantly appraising that lean, hard-muscled body, those streamlined haunches and those long leggy strides, here was a born thoroughbred! Whenever the stable was taken to compete at the races, she was the one who could be counted on to bring home the Blue Ribbon. She quickly became his prized filly – the ponygirl to beat. When exhibitions were held at the estate, Justine was the one Lord Edgewater inevitably singled out for a dazzling solo performance.

She knew how much he enjoyed showing her off; displaying her proud mien, her aristocratic carriage and that high-stepping prance that never failed to garner applause from her Lordship’s guests, those enthusiastic connoisseurs who held engraved and highly-prized invitations to those very exclusive weekend events. The very thought of such solo performances before an appreciative audience made the girl flush, preening with pride.

But pride can be a dangerous two-edged sword. And never more so than when that pride is coupled with the sort of beauty that is bound to incite the envy of other women. And if among those other women there is one who is strong-willed, equally proud, and equally beautiful, and if that woman holds high authority, then such pride should best be hidden, lest it become very dangerous indeed. And such a woman was the haughty Lady Ursula, the coldly remote mistress of Edgewater Manor.