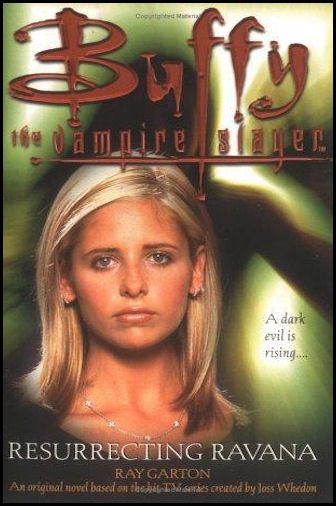 “I talked to Daruwalla because I needed to talk to someone, and that’s her job!” Willow snapped.

Buffy felt a tingling sensation in her shoulder, the voice of instinct telling her to start swinging.

Giles stepped between them abruptly. “We simply want you to be aware, Willow, of a possible relationship between Ms. Daruwalla and the problem at hand. Not likely, mind you . . . just possible.”

Willow spun around and swept her books up off the table. She stalked to the front of the library. “I can’t believe you’d think that about her,” she said angrily through her tears. She stopped for a moment and looked back at them. “Did it ever occur to you maybe she’s just, like . . . a nice person?” Willow looked directly at Buffy. “You don’t know what I needed to talk to her about, and you don’t care. Jeez, you . . . you’ve been chasing monsters so long, you’re becoming one, Buffy.”

Night of the Living Rerun

The Power of Persuasion

Child of the Hunt

Return to Chaos The Gatekeeper Trilogy

Book 1: Out of the Madhouse

Sins of the Father

The Watcher’s Guide: The Official Companion to the Hit Show The Postcards 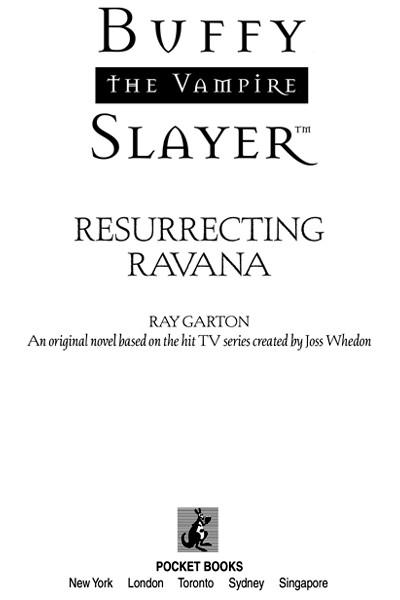 This book is a work of fiction. Names, characters, places and incidents are products of the author’s imagination or are used fictitiously. Any resemblance to actual events or locales or persons, living or dead, is entirely coincidental.

An
Original
Publication of POCKET BOOKS

All rights reserved, including the right to reproduce this book or portions thereof in any form whatsoever. For information address Pocket Books, 1230 Avenue of the Americas, New York, NY 10020

POCKET and colophon are registered trademarks of Simon & Schuster Inc.

This book is for
Buzz Burbank
My favorite swingin’ newscaster

I had a lot of help and support while writing this book, and I’d like to thank the people who provided it. My wonderful wife, Dawn; Scott Sandin, Derek Sandin, Jack Barnes, Jane Naccarato, Cathy Bunting, Terry Kanago, Collier Mariano, Tim and Mary Kingsbury, Sandi Kessel and Wilma Kessel; all my friends in the Horrornet chat room; thanks to Scotty of the Tattooed Love Dogs; my parents, Ray and Pat Garton; my reps and friends, Ricia Mainhardt and A. J. Janschewitz; my editor, Lisa Clancy, and her assistant, Micol Ostow; and thanks to Don and Mike, who keep me from taking anything too seriously.

T
HE NIGHT SKY LOOKED LIKE AN ENDLESS EXPANSE OF
black satin sprinkled with silvery glitter. An owl screeched from a tree branch overhead and a chilly breeze whispered an ominous secret warning through the pines and firs. At least, that was how it sounded to Buffy Summers. Secretive and ominous things made up a great deal of her life.

Buffy and her friends had moved silently since they’d left the van on Rockway Road. The only sound they made was the crisp crackle of pine needles being crushed beneath their shoes. As they crept through the patch of woods, two other noises grew steadily louder: the rushing of ocean waves against the rocky shore, and the muffled throbbing of raucous heavy metal music playing indoors somewhere nearby.

Buffy spotted light up ahead and slowed her pace. The others came to a stop behind her. The cabin came into view through a thicket of wild grapevines. Buffy raised her crossbow and loaded it with a wooden stake that came to a deadly point. This stake was different from those she typically used; it ended in a sharp and shiny silver tip.

“This is it,” Buffy whispered over her shoulder to the others.

They were looking at a small, run-down cabin in the center of a clearing. It probably had looked very cozy and welcoming at one time, before years of neglect. A single bare bulb cast a dull yellow glow over the covered porch. Behind the cabin, the woods thinned considerably and a narrow path disappeared into the night toward the rocky beach. In front, an old barbecue grill leaned crookedly near a picnic table.

They faced the southern side of the building, where vines had nearly consumed a small rowboat that lay upside-down on the ground. Five large motorcycles were parked side by side in the front. The music coming from inside the cabin was like thunder, and somewhere in all the noise, Buffy heard high, hysterical laughter.

The Slayer looked up at the moon in the ink-black sky. While it indeed appeared fat and round, this was the night after the full moon, so it was no longer truly full. But it was enough to keep Willow’s boyfriend Oz locked up for the night.

Buffy turned to her. “The what?”

“According to the
Witch’s Almanac,
this is the month of the Blood Moon.”

“Oh.” Buffy looked up again as a bat darted back and forth overhead. “Well, let’s just make sure we don’t spill any of ours tonight, okay?”

“Now, remember,” Giles said quietly, “it’s not necessary to hit the heart as it is with vampires. Getting the silver anywhere into the flesh is what counts. That should make this a little easier. They’ll be moving very fast, so —”

“And they’ll be hungry,” Willow added quietly. When the others turned to her, she whispered, “Remember what the book said? About the hunger? That’s what drives them. Even though they’ve already, um . . . you know . . . eaten.”

“So when they look at us,” Xander said, “they’ll be seeing five double bacon cheeseburgers with a side of intestines.”

“Speak for yourself,” Cordelia hissed, slapping the back pocket of her Tommy Hilfiger khakis.

Buffy said in a firm whisper, “Hey, focus. The book also told us how well these things can hear, remember?”

Buffy said, “Giles and Willow, you stay on this side of the house. Xander and Cordelia, you go around back to the other side. Hang back until I kick that door open and get their attention. I’m gonna draw them outside, and then I wanna see some serious stakage. If they think I’m alone, they’ll be less prepared for you guys.”

They moved into the clearing and spread out around the cabin. Willow and Giles stopped at the southern end of the rickety-looking covered porch while Buffy went to the three wooden steps in front of the house.

The music inside pounded on, reverberating like the stomping footsteps of a giant. The hysterical laughter continued, grew louder, and became higher in pitch. The laughs melted into a high keening wail, which became more rounded, throatier, until it was a cold, piercing howl.

Buffy went up the steps to the long porch, but before she could kick the cabin’s door in, it was pulled open.

The open doorway framed a tall but slightly hunched figure wearing what was left of a white tank top. The tank top was covered with dark stains and hung from the figure in shreds. The broad, tall figure was backlit, and light shone through clumps of thick fur on the head, shoulders, and arms. It held something in its right hand, something that looked like a short club; unidentifiable threads dangled from the end of it. The figure stepped forward into the pool of yellow light.

The creature’s snout glistened with blood, and as its black lips pulled back into a sneering grin, they revealed long, sharp, bloody fangs with bits of meat stuck between them. The deep, dark eyes absorbed every bit of light around them and reflected it back in piercing pinpoints of silver.

Although the light was poor, the thing in the creature’s hand was obviously not a club, but a human arm torn off at the elbow; the black, furry paw held the arm’s pale, dead hand. Chunks of flesh had been gnawed from the arm, like meat from a drumstick.

A thick growl began to rise from deep inside the creature as it spread its arms expansively. The sound was not remotely human, but it formed a word. “Company!” It tossed the arm aside and hunched down even farther, preparing to pounce. “And just in time for dinner.”

When they first began the investigation, it had looked as if they might be dealing with cattle mutilations. Again. But this time the cattle had not exactly been mutilated. They had been . . . eaten. Right to the bone. Bones were all that had been left of the cows in a pasture just outside Sunnydale. All muscle and flesh had been eaten away, and parts of the remaining skeletons had been gnawed on with some very sharp teeth in some very powerful jaws. A local radio newscaster speculated that wild animals — perhaps coyotes or mountain lions — were responsible, but Giles disagreed.

“Not even the hungriest mountain lion would clean a skeleton of every last bit of flesh like that,” the Watcher told Buffy. “This is something else, something . . . unnatural.”

“The fact that ten head of cattle had been reduced to skeletons on the night before the full moon makes that very likely,” Giles replied. “But why cattle? Why would a werewolf — or even a pack of hellhound-like creatures — feed on
cattle
in an area so populated with
people?”

“Maybe they don’t want to hurt anyone,” Willow suggested.

“Uh-uh,” Oz said. “As far as werewolves go, once the change has taken place, you can’t control yourself.”

They all paid attention. When it came to werewolves, Oz knew what he was talking about. He’d been bitten by his cousin Jordy, who was a werewolf. As a result, Oz became a werewolf on the nights before and after the full moon, as well as the night of the full moon itself. Not wanting to harm anyone, with the help of his friends, Oz took precautions each month. He was securely locked up on those three nights so he was unable to do any damage to property or people.