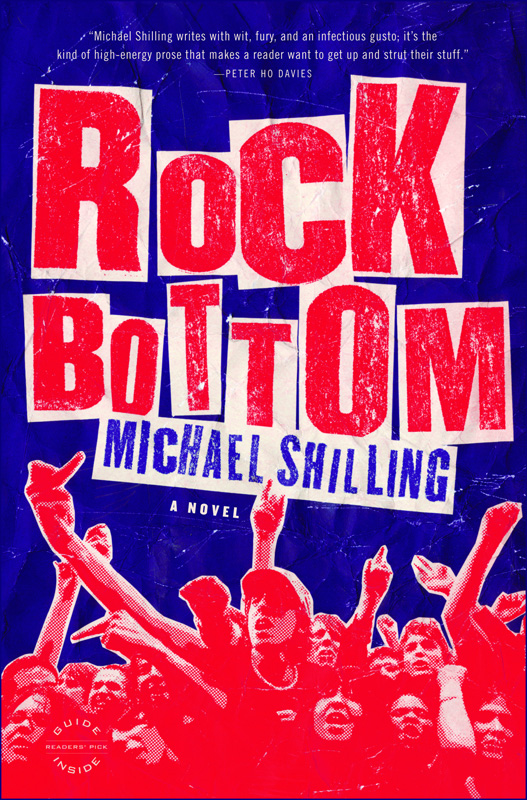 Visit our Web site at
www.HachetteBookGroup.com

Back Bay Books is an imprint of Little, Brown and Company. The Back Bay Books name and logo are trademarks of Hachette Book Group, Inc.

“To Be Someone” by Paul Weller © 1978 by Stylist Music Ltd. (PRS), all rights in U.S. and Canada administered by Universal Music — Careers (BMI), used by permission, all rights reserved.

“A rock-and-roll novel at once rocking and rollicking.
Rock Bottom
knowingly skewers the pretensions of the music business, while never taking them seriously, and the result is a simultaneously scabrous yet affectionate portrait of a band and its entourage in the final throes of a tour de farce. Michael Shilling writes with wit, fury, and an infectious gusto; it’s the kind of high-energy prose that makes readers want to get up and strut their stuff.”

“
Rock Bottom
is a raunchy, knowing, brilliant novel—a diamond-sharp, lightning-witted, sex-packed, hilarious account of the last days of a fallen-from-grace hard rock band, marooned in Amsterdam under the crashing ruins of a lost greatness. Shilling, himself a former musician, is our insider guide to the ravages and seductions of the rock-and-roll world, and he describes the sights with a tender, pitch-perfect savagery. But more than this, the novel is a remarkably accomplished piece of art—a complicated survivor’s tale full of hilarious sadness, virtuous cruelty, beautiful destruction— the sort of book you pick up with high expectations and that, to your surprise and delight, surpasses them all. A book funnier, smarter, sadder, and more inventively composed than you could possibly have hoped. It’s a hit—I mean, I was laughing all the way through, and singing along.”

—Michael Byers, author of
Long for This World

“Michael Shilling’s debut is everything one wants in a novel: tragic and thrilling, farcical and realistic. The prose is exuberant in its range and wildness, but also in its little treasures, its unfoldings and depths. Here is a writer who brings characters to life, circumstances to light, and imbues them with resonance, traveling the whole map of human obsession and longing with breathless energy. This is a sexy, funny novel, but with the kind of profundity we need from our best novelists at this time. Michael Shilling is an important new writer, and this is a novel you won’t forget having read.”

—Laura Kasischke, author of
The Life Before Her Eyes
and
Suspicious River

“Finally, at last, an ass-kicking, authentic rock-and-roll novel, one that peels back the veneer and gloss and—with an insider’s eye—exposes the lovely, wondrous dirt.”

There’s no more swimming in a guitar-shaped pool.

No more reporters at my beck and call.

No more taxis, now we’ll have to walk.

But didn’t we have a nice time?

Didn’t we have a nice time?

Oh wasn’t it such a fine time?

It’s about my gardener, actually.

BOBBY HAD BEEN AWAKE
for about ten seconds when his hands started to itch. His poor fucking hands, cracked and raw with eczema, stuck out of the blanket like rotting snails.

He lay on a cot in Morten’s living room. Morten, a friend of Helen, their European booking agent, was one of those starfuckers-in-spirit who put bands up so he could be part of the rock-and-roll underground railroad. No one in Blood Orphans had met Morten — he was a banker always away on business — and this time around he had apparently neglected to pay his heating bill.

In the late-autumn half-light of the gloomy Amsterdam morning, Bobby stared at his hands with sadness and wonder. The eczema, a lifelong nuisance that in the past year had become a scourge, started off as little bubbles of lymph that, upon being opened by his stubby nails, caked into a yellow curd, burned like they had salt rubbed in them, and made playing the bass guitar a painful chore. Made him have to keep his semirancid left palm away from the pick guard and pluck gingerly. Forced him to play nothing but root notes, because every time his fingers moved, the fretboard bit them like a fucking cobra.

He gutted his left palm for a minute. It felt like he was getting to the bottom of something.

The blankets Morten had provided were for children, puny swatches of acrylic adorned with the actions of different cartoon characters. On Bobby’s blanket, Underdog soared to the rescue in a long cape, his ears floppy, his grin light.

Bobby sat up and flexed his feet. Around him, in little Euro cots — always too short, always too narrow — slept Darlo and Adam, the drummer and guitar player. Shane, the singer, was missing, and that was fine with Bobby. He hated Shane, that faux-spiritual prick. And without Shane around, he didn’t have to divide his attention. He could fully focus on his recurring fantasy of killing Darlo. Wiggling his freezing toes, Bobby imagined going into the kitchen, finding a big fucking knife, and slashing the drummer’s smug, sex-addicted, square-jawed face until it looked like a Levolor blind. For fucking all the girls Bobby wanted to fuck. For constantly mocking his lack of musical ability. For exuding a smooth idiot confidence Bobby envied in a way that bordered on obsession.

Darlo slept with his hands behind his head, his mouth slackened into a smile, at perfect ease. Glyphs of Wonder Woman covered his blanket.

Blood Orphans had played in Amsterdam last night, and they were playing there tonight as well. The record company, determined to bury them alive, had conspired with the booking agency to get them a two-night stand at the new and improved Star Club. The original Star Club, in Hamburg, was where a band called the Beatles had spent four months in leather jackets and pompadours, honing their skills before they ate the world. Recently, some rich Dutchie had opened his own Star Club on the bank of the Amstel. Helen, who, like most booking agents, thought she was a strategic genius, had decided that Blood Orphans could really profit from bathing in the quasi-historical wave pool of an ill-conceived tourist trap.

More like a whimper, a peep, the distant screech of a rodent under the wheels of a truck. Bobby couldn’t quite believe it, but here it was, the last day of their last tour. Tomorrow he’d be on a plane to Los Angeles, this grand failure over, and he’d be back in the world, where Blood Orphans was just some band that had blown its chance, and he was an unemployed loser.

In ripped black T-shirt and banana-print boxers, Bobby shuffled into the kitchen and located the coffeemaker, an old, nasty Braun shellacked with the dirt of a thousand grubby rock musicians’ paws. He poured ground coffee and grimaced. Dirt; there was a time when he wouldn’t even have noticed. There was a time, on the first or second or even third tour, when everything had seemed part of some higher pattern of beauty. Back before they’d been branded racists. Back when all the teeth in his mouth were real. Back before the riot in Sweden, the jail time in Omaha, and a thousand utterly predictable days in that shitty van.

He paused in these ruminations to scratch furiously at his hands, rubbing and digging like a psychopath plotting with invisible allies. The dermal demolition proceeded so well, so much better than anything else ever did, that he kept at it until he felt a robust rip in his right palm.

“Mommy!” Adam yelled from his bed. The guitar player often cried out for his mother in his sleep. His small blankets of shit acrylic were festooned with images of Mickey Mouse in top hat and tails.

“Mommmaaa!” Adam howled in response, his voice echoing through the place, distant yet piercing, like something off a Pink Floyd record.

While the coffee brewed, Bobby went into the bathroom and looked for provisions to soothe his hands. In two years of touring he’d raided many a medicine cabinet for salves and ointments. He had tried Nivea and Aveeno. Doused his hands in shea butter and Cetaphil. Done a dance of olive oil and calendula and minerals from the Dead Sea, prayed to the gods of aloe vera, camphor, and almond blossom, worshipped at the dark altar of cortisone. For all this he had been forsaken.

He stepped into the shower, the soap-spattered curtain of which showed the Justice League doing its thing, wrinkled up and warped from countless hours of rank musician scrubbing. Dried rivulets of mold ran down the plastic.

If there was one thing Bobby missed about America, it was bathroom life — how hot water was hot, cold water was cold, and both were right on time. Here in Europe the ham was meatier, the beer was hoppier, the sex was another thing completely, but the plumbing was ancient, the pressure in the pipes was anemic, and the toilets had the hole at the back of the bowl, allowing one to examine one’s waste for approval before signing off. This variance in toilet architecture had spooked Bobby into a long month of constipation. Now he only played when his body went into the red. He only played to a sold-out crowd.

When the soap touched his raw right hand, the lather turned into a mass of bees.

“I am so cosmically fucked,” he said, and stared into the sputtering showerhead.

He dried off with one of those tiny Euro towels — thin and nonabsorbent — applied Eucerin to his hands, shook them like they were on fire, and retrieved ten Band-Aids from his stash. Soon his hands were covered. The Mummy, back in black.

Navigating the uselessness of hands covered in latex, he put on the same clothes he’d worn for a week, including jeans so ripe they could walk away. Then he poured some coffee, procured sugar and milk, and lit a cigarette.

Euro cigarettes were not fucking around. Instantly the day improved. But then his phone rang. His bell tolled.

It was Joey. The manager. The fucking day tripper. That bitch.

“What the fuck do you want?”

“Play nice?” He growled. “Come on tour and see how much you want to play nice.”

“How are your hands?”

“I said, what the fuck do you want? Why are you calling me?”

The Novel Habits of Happiness by Alexander McCall Smith
The Heat of the Knight by Scottie Barrett
Come by Becca Jameson
A World on Fire: Britain's Crucial Role in the American Civil War by Amanda Foreman
A Thousand Words For Stranger (10th Anniversary Edition) by Julie E. Czerneda
Savage Spawn by Jonathan Kellerman
Life in Shadows by Elliott Kay
Charming, Volume 2 by Jack Heckel
Love Renewed (Entwined Hearts #3) by Maria Macdonald
A Gun for Sale by Graham Greene