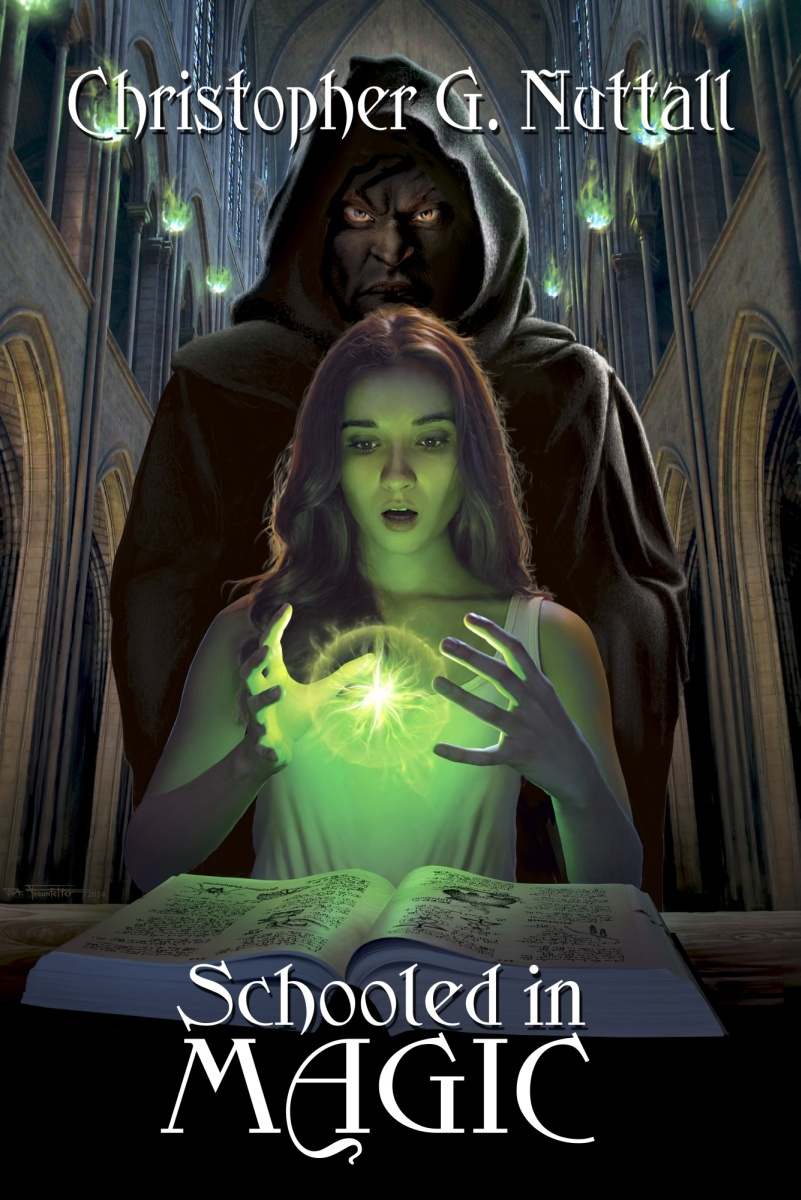 This is a work of fiction. All concepts, characters and events portrayed in this book are used fictitiously and any resemblance to real people or events is purely coincidental.

All rights reserved. No part of this book may be reproduced, stored in a retrieval system or transmitted in any form by any means electronic, mechanical, photocopying, recording or otherwise, except brief extracts for the purpose of review, without the permission of the publisher and copyright owner.

Published in the United States of America.

Dedicated to Emily Martha Sorensen, who inspired the core idea

behind this series and gave her name to the heroine.

Emily Sanderson nodded reluctantly as the librarian stepped past her seat and headed to the handful of other occupied chairs. This late at night, only a handful of people remained in the library, either intent on reading or simply because they had nowhere else to go. The library was small and rarely more than half-full even at the best of times. Emily loved it because it was her refuge. She too had nowhere else to go.

She stood and gathered her books, returning them to the trolley for re-shelving. The librarian was a kindly old man–he’d certainly not asked any questions when the younger Emily had started to read well above her grade level–but he got grumpy when visitors tried to return books to the shelves themselves. Not that she could really blame him. Readers had a habit of returning the books to the wrong places, causing mistakes that tended to snowball until the entire shelf was out of order. And Emily hated to see poor Rupert grumpy. He was one of the few people she felt she could rely on.

Most teenage girls her age would never crack open a history book, unless they were looking for the answers to some test. Emily had fallen in love with history from a very early age, taking refuge in it from the trials and tribulations of her life. Reading about the lives of famous people–their struggles to change the world–made her feel her universe had a past, even if it didn’t have a future. Perhaps she would have made a good historian one day, if she’d known where to start working towards a history degree. But she already knew she would never find a proper life. She knew what happened to most graduates these days. They graduated from college, they celebrated, and then they couldn’t find a job.

Her stepfather had certainly made it clear to her, after an endless series of arguments about what she wanted to do with her life, that she would never do anything worthwhile with her life.

“You’ll never amount to anything,” he’d told Emily, one drunken night. “You won’t even be able to flip burgers at McDonald’s!”

Her mother should never have married again–but she’d been lonely after Emily’s father had vanished from their lives, so long ago that Emily barely remembered him. Emily’s stepfather–she refused to call him
father
–had never laid a finger on her, yet he hadn’t hesitated to tear down her confidence every chance he could, or to verbally rip her to shreds. He resented Emily and Emily had no idea why. She didn’t even know why he stayed with a woman he clearly didn’t love.

Emily caught sight of her own reflection in one of the windows and winced inwardly. She didn’t really recognize the girl looking back at her. Long brown hair framed a face too narrow to be classically pretty, with pale skin and dark eyes that looked somehow mournful against her skin. Her clothes were shapeless, hiding her figure; she rarely bothered with makeup, or indeed any other form of cosmetics, not when there was no point. They wouldn’t improve her life.

The librarian waved to her as she took one last look at the bookshelves and headed for the counter. “No books today?”

“No, sorry,” Emily said. She had a library ticket–it said a great deal about her life that it was her most treasured possession–but she’d filled it over the week. There would be no more books until she returned some old ones. “I’ll see you tomorrow.”

The familiar sense of despondency and hopelessness fell back over her as she stepped out and walked down the street. There was no future for her, not even if she went to college; her life would become consumed by a boring job, or an unsatisfactory relationship. No, the very thought was laughable. She was neither pretty nor outgoing; indeed, she spent most of her life isolated from her peers. Even when there were groups that might have attracted her–she did occasionally take part in role-playing games–part of her never wanted to stay with them for very long. She wanted friendship and companionship and yet she knew she wouldn’t know what to do with them if she had either.

In fact, she’d been to a game earlier, before coming to the library. And she’d left early.

But now she didn’t want to go home. Her stepfather might be there, or he might be out drinking with his buddies, swapping lies about their days. The former was preferable to the latter, she knew; when he was out drinking, he tended to come home drunk, demanding service from Emily’s mother. And then he shouted at Emily, or threatened her.

Or
looked
at her. That was the worst of all.

She wished to go somewhere–anywhere–other than home. But there was nowhere else she could go.

Her stomach rumbled, unpleasantly. She would have to prepare a TV dinner for herself, or perhaps beans on toast. It was a given that her mother wouldn’t cook. She’d barely bothered to cook for her daughter since Emily had mastered the microwave. If she hadn’t been fed at school, Emily suspected that she would have starved to death by now.

As she trudged home, she realized something with a crystalline clarity that shocked her; she wanted
out
. She wanted out of her life, wanted out so badly that she would have left without a backward glance, if only someone made her an offer.

A fatal disease would have been preferable
, she thought, morbidly.

The wave of dizziness struck without warning. Emily screwed her eyes tightly shut as the world spun around her, wondering if she’d drunk something she shouldn’t have during the role-playing session with the nerds and geeks. She had thought that they were too shy to
ever
spike her drink, but perhaps one of them had brought in alcohol and she’d drunk it by mistake. The sound of giggling–faint, but unmistakable–echoed in the air as her senses swam. And then she fell ... or at least it
felt
like falling, but from where and to what?

And then the strange sensation simply faded away.

When she opened her eyes, she was standing in a very different place.

Emily recoiled in shock. She was standing in the middle of a stone-walled cell, staring at a door that seemed to be made of solid iron. Half-convinced she was hallucinating–perhaps it had been something worse than alcohol that she’d drunk, after all–she stumbled forward until her fingers were pressed against the door. It felt cold and alarmingly real to her senses. There was no handle in the door, no place for her to try to force the door open and escape. The room felt depressingly like a prison cell.

Swallowing hard, Emily ran her fingers over the stonework, feeling faint tingles as her fingertips touched the mortar binding the wall together. It felt like the castles she’d read about, the buildings that had been constructed long before concrete or other modern building materials had enabled the artists to use their imagination properly. There was a faint sense of
age
pervading through the stone, as if it was hundreds of years old. It certainly
felt
hundreds of years old.

Desperately, Emily looked from wall to wall, seeking a way out of the cell. But there was nothing, not even a window; the only source of light was a tiny lantern hanging from the ceiling. There was no bed, no place for her to lay her head; not even a pallet of straw like she’d seen in the historical recreations she’d attended with her drama group. And how had she come to be here? Had she been arrested? Impatiently, she dismissed the thought as silly. The police wouldn’t have put her in a stone cell and they wouldn’t have had to spike her drink to arrest her.

A hundred scenarios her mother had warned her about ran though her mind; her captor could be a rapist, a serial killer, or a kidnapper intent on using her to extort money from her parents. Emily would have laughed at the thought a day ago–her stepfather wouldn’t have paid
anything
to recover her from a kidnapper–but it wasn’t so funny now. What would a kidnapper do when he discovered that he’d kidnapped a worthless girl?

A clatter that came from outside the iron door rang through the cell and Emily looked up sharply. She would have sworn that the iron door was solid, but all of a sudden a tiny hatch appeared in the metal and a pair of bright red eyes peered in at her. There was something so utterly inhuman about them that Emily recoiled, convinced that they belonged to a monster. Or a devil. There was a second rattle at the door, which then blurred into a set of iron bars, revealing a hooded figure standing outside the cell. His eyes, half-hidden under his hood, weren’t just red; they were
glowing
. The rest of his face was obscured in darkness.

Behind him, there were more stone walls. A pair of skeletons stood against the wall as if they’d been left there to rot. Something about them caught Emily’s attention before she saw the first skeleton begin to move, walking forward as if it were still flesh and blood. The second skeleton turned its head until it was looking directly at Emily, the sightless eye-sockets seeming to peer deeply into her soul. Emily felt her blood running cold, suddenly convinced, right to the very core of her being, that this was no ordinary kidnapping. She must be a very long way from home.